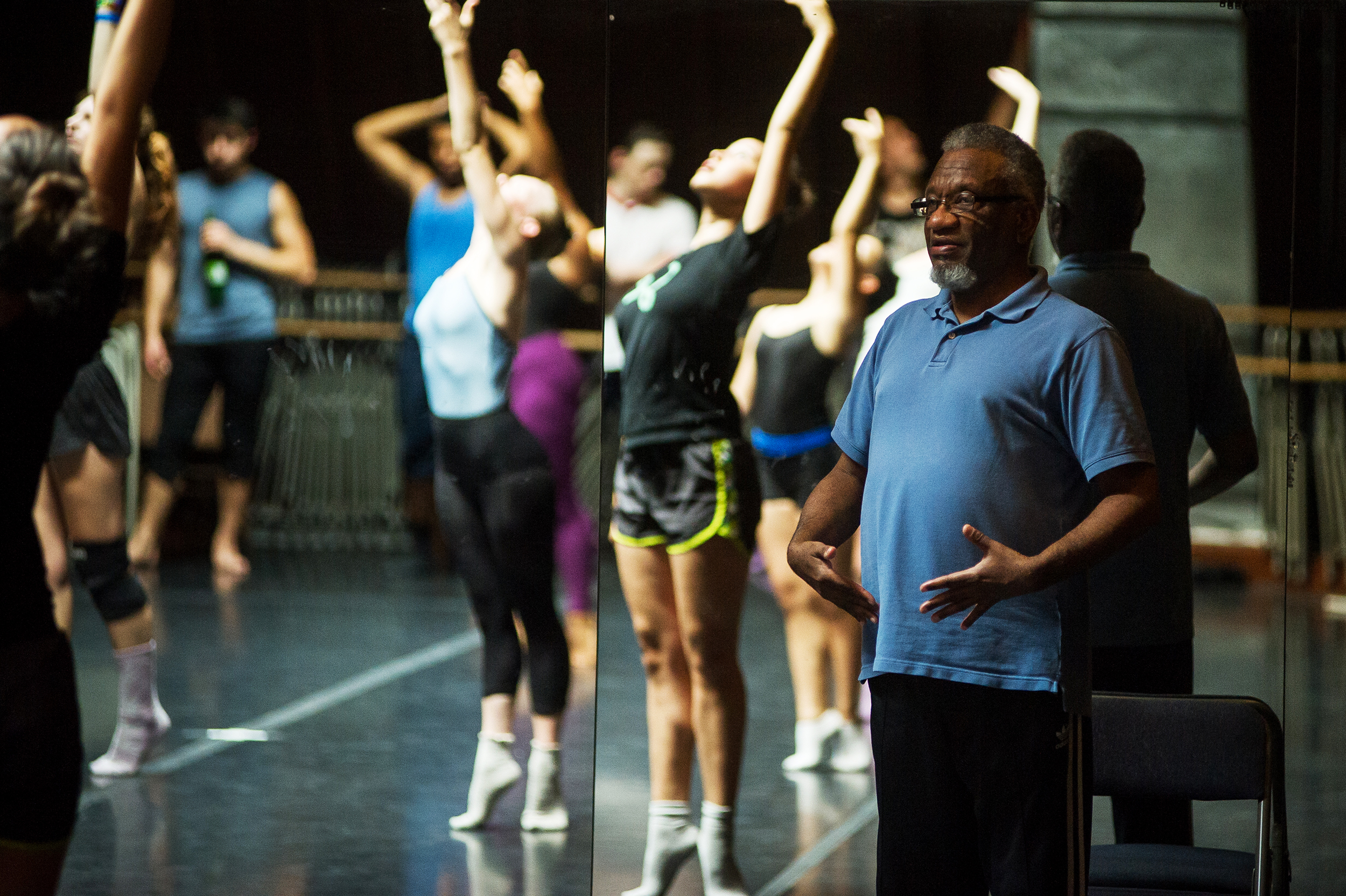 The artist in action: Donald Byrd in rehearsal. (Photo by Nate Watters)

Not really in the Marie Kondo way, though there’s a little bit of that, but mostly by going back through the evidence of his life as an artist and taking stock. He's sorting through the notes, the videos, the photos and all the other stuff from 40-plus years of making dances that challenge our assumptions while they expand our aesthetic. With works like “The Minstrel Show” and “Harlem Nutcracker,” he’s commanded national attention from the beginning — in 2002 he brought that point of view with him when he left his company (Donald Byrd/The Group) in New York City and came to Seattle to head Spectrum Dance Theater.

Byrd is at an inflection point in his career right now: This week he received the grand $275,000 Doris Duke Artist Award, given without any restrictions. (The award was announced in a July 9 press release). Byrd joins Pat Graney, who was honored in 2013, as the only two dance artists from the Northwest to ever receive it. (The other 2019 national awardees include choreographer Michelle Ellsworth, who was in residence at On the Boards last winter; jazz artists Terri Lyne Carrington and George Lewis; and theater artists Marcus Gardley and Lauren Yee).

With several big projects also coming up, it would be understandable for Byrd to just be looking forward, but he’s been spending time looking back as well.  He’s the subject of an upcoming exhibit at the Frye Art Museum this autumn, examining his choreography and putting his work in the larger context of African American dance. And he’ll be working on two major commissions (for the Alvin Ailey American Dance Theater and Pacific Northwest Ballet).

He turns 70 in a couple of weeks, and so it felt like the right time to sit down with Byrd and talk about this moment — how he got here and where he’s heading.

This interview has been slightly edited and condensed.

The Doris Duke award is quite special — you don’t always see prizes that are so unrestricted.  Do you have to do something or make something?

And that’s part of the Duke thing — we had an orientation last month. There are some requirements — there are things they want you to do before they give you the money. It’s around money management. The MacArthur people don’t do anything.  They just give you the money and say, “Good luck.”  Duke is different. I have a lot of issues around money, and there’s like a money shrink that helps you figure out your issues about money, rather than running around with these undercurrents of anxiety.

Your whole professional life, did you ever have a situation where you didn’t worry about making budget?

No, it always felt temporary. This whole process, creating a structure for yourself, a way of managing what resources you have.  That’s new for me at 70.

Usually, it’s like stringing together a series of projects to make the whole of your life — like quilting or mosaic.

I’ve known this ever since I started making dance when it didn’t matter what my body looked like in the real world; it only mattered when I was on stage. Everything has been focused on career, on being a better artist. So everything else just didn’t get worked on, other aspects of my life. So this has triggered getting some of that other stuff to work. Because if that works, some aspects of the art-making is easier.

So many things are happening, including the Ailey commission for their next season and the PNB commission next November. It feels like it’s something. There are people who have been having conversations (with me), people who never talked to me before, big, prestigious presenters — they’re asking, “What do you want to do?”  They don’t normally say that — they tell you what they want you to do. So it does feel like there’s something. I was at a meeting at the Frye, and I asked, “Do you think I’m going to die now?” There is a certain amount of wrapping up. But I’m making new work; that’s all happening, too.

I’ve started writing a memoir. I was in Italy for a month — the proposal was to begin writing a memoir. It’s thrust me into my history, not just my artwork, but my life, too. So I do feel like there’s something — it’s a moment, and that’s great. … I’m happy about the moment because it’s triggered some other things.

You have these two big commissions coming up. What are you planning?

I talked to Robert Battle [artistic director at Ailey], and I told him I want to do something centered around Black history and race. I’ve been thinking recently there’s a part of the Ailey legacy that has to do with social and civil rights, social justice, Black rights. Early in the ’60s and ’70s, that was a big part of the repertory. Lately, they’ve been doing a lot of things honoring Mr. Ailey, but more about aesthetics than politics. I’m using the Tulsa riots as a source, as inspiration. I was in Tulsa with Spectrum, and I went to Greenwood. Some of that area still hasn’t been rebuilt since the riot in the ’20s. It happened in 24 hours, and the thing that triggered it was a mistake. It says something about the assumptions or presumptions, that white people have about Blacks. I wanted to develop a piece like that. There is no scene change, no location change — everything happens right there. I think I can do something with that.

At Spectrum, you’ve developed a way of working with your dancers …

I’m not so concerned about it working with the dancers, I’m more concerned about the process of making the piece. Making something that is the subject matter is there, and it’s related to social consciousness and the politics of being a Black person, but it still has to be a piece of art. It has to do the thing that art does — some theater is didactic, and that’s really good, but I don’t want this to be didactic. What I’ve learned the last couple of years, with work like “Strange Fruit” and “Shot” — they do that [show a narrative] but you also connect with it emotionally. It’s not heady — even though that’s there, and you can feel it, but you are confronted with a whole set of emotions rather than a highly conceptualized work where it all happens in the audience’s head.

You’ve made work for PNB before, but you’re coming back to them at a different place in your career.

I’m working with music by an Israeli composer, Emmanuel Witzthum. We met in 2011 in Jerusalem. One of Spectrum’s programs last year was all his music — he always sends me stuff. It took me a while to understand his music — the conclusion I finally came to is that his music is what he can’t explain about in this world. Music becomes the way to explain it. It has a certain tone, a feeling about it. Not narrative, but about the emotional connection between people. I’m working with this piece, “Love and Loss.” It grew from his separation from his wife. It’s not romantic. One thing I’ve noticed, when you’re young, there are a lot of things that go into what you think love is — when you get older, some of those things go away. There’s less drama — there’s still intensity, but less drama.

And then there’s Spectrum — you’ve said the company will be performing as a part of the Frye exhibit — how will that work?

I’ve been looking at what we’ll be doing — the Frye is an opportunity to springboard some other things. Looking at the influence of Los Angeles on my work — kind of like a retrospective of my work. Some of it is in this show. I was in L.A. from '76 to '83 — I want to look at what was happening there that informed how the work was. I will use that stuff to explore some of the performance stuff we’ll be doing at the Frye — there’s still creativity involved [rather than restaging old work]. How does this stuff fit on dancers today?

[In the past] I was wanting things so badly, and telling myself, “I’m going to make it happen.” I don’t try to make things happen anymore. I just do what I’m going to do, and stuff happens or it doesn’t happen. When it happens, I’m excited, and when it doesn’t happen — I’m momentarily disappointed, but not deterred.

Sandra Kurtz teaches and writes about dance in Seattle and elsewhere.