In a sign of what may be coming to other King County cities, the Seattle suburb is introducing programs that take a different approach to difficult problems. 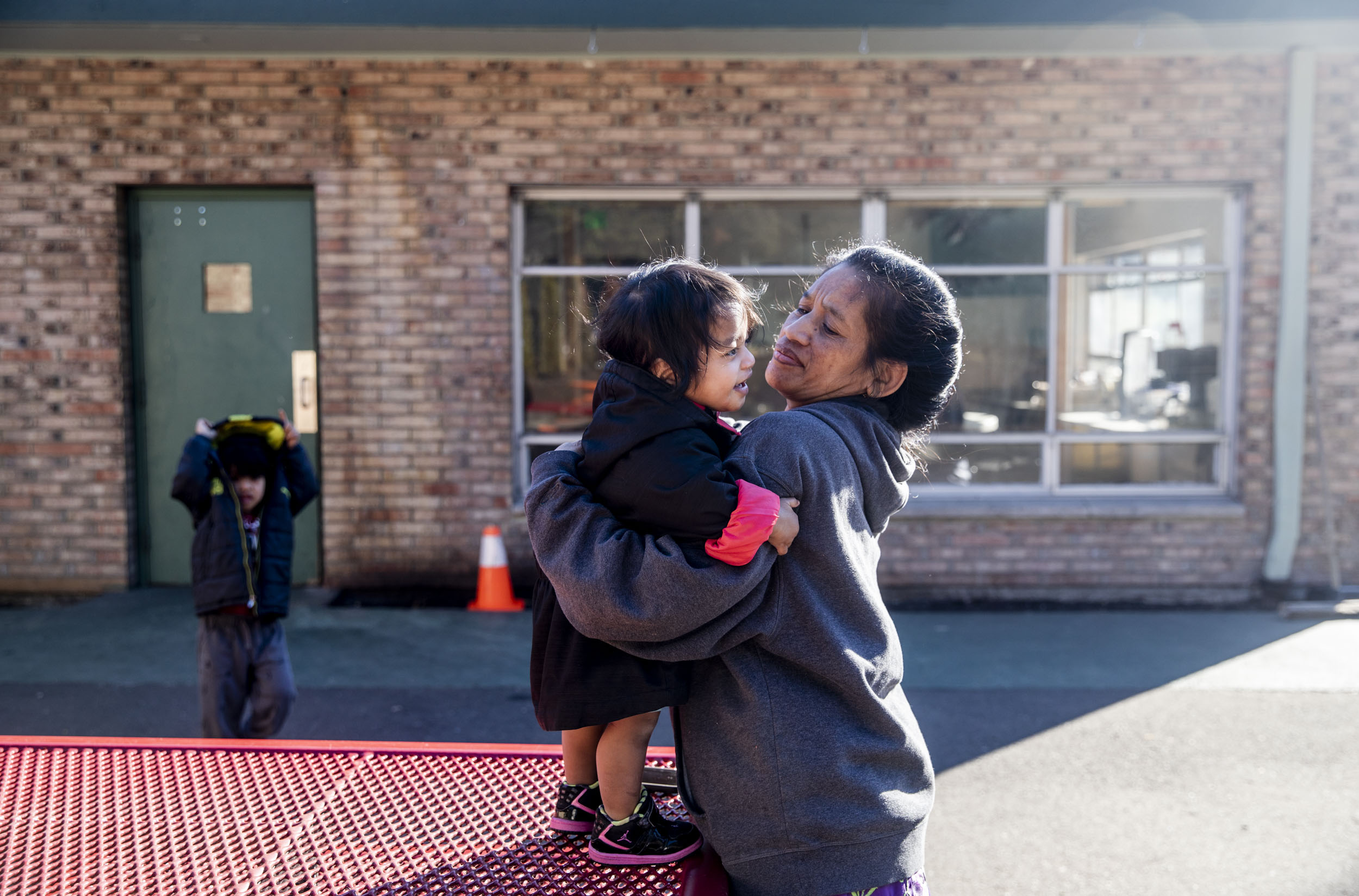 Jelina Lejer holds her year-old daughter, Tazanite, outside Mary's Place homeless shelter in Burien on March 1, 2019. Lejer and her five children are taking shelter in the newest Mary's Place location. (All photos by Dorothy Edwards/Crosscut)

At a time when angst about homelessness, drugs and other causes of arrests seems to have reached a breaking point in the region, King County officials are expanding a number of key programs meant to tackle some of society’s stickiest problems. Instead of delving further into the urban core, though, these new programs are being launched in the suburbs.

Burien, about 10 miles south of Seattle with an estimated population of approximately 50,000, is a kind of pilot community in this effort. The suburb appears to be a good candidate. In addition to rapid growth, it has been rocked by racial tensions, as well as gang and youth violence. Last year, two teens were killed at a Burien apartment complex in a shooting believed to be gang related.

In the past six months, a number of programs and services have been introduced in Burien to address the challenges of a changing community while incorporating innovative approaches to criminal justice and human services. In some instances, Burien is leading a transformation of the way Seattle suburbs approach some of the issues that have accompanied the region’s growth.

“I’m pretty happy with the way we’re approaching this,” said Burien Mayor Jimmy Matta. “To me, I’d rather take the compassionate approach,” he said, while acknowledging that he knows the new programs wouldn’t work for everyone.

Speaking of residents, Matta said that as an elected official, he feels “empowered that I can refer them to something.”

“You’re making sure that you’re turning lives around,” Matta said.

This summer saw the introduction of a program known nationwide for successfully breaking the cycle of arrest and incarceration among low-level drug dealers, addicts and prostitutes: Law Enforcement Assisted Diversion. LEAD started in Seattle and has seen enough success that King County Executive Dow Constantine announced last year he was proposing $3.1 million in funding to expand the program into three south King County cities. Burien is the first.

Case managers in the LEAD program are instructed to tailor services for individual drug offenders and to expect relapses or other setbacks. They connect participants with services that help with housing, health care, job training, treatment and mental health support.

The aim is to produce results in what has been characterized by some in the community as a revolving door of offenses and arrests.

“Officers are super frustrated as well by the system,” said Burien Police Chief Theodore Boe. “I have booked this person in jail 20 times, and it’s had no effect. They recognize this is not having the desired effect of changing the behavior.”

“Now we have another option to try to motivate them into solving the underlying issues that are driving the behavior,” Boe continued. “All of it works together.

“Sometimes you have to help somebody up, and I think this gives us an opportunity.”

Burien City Councilmember Austin Bell said he supports LEAD because it contradicts a prevailing view, which sees drug addiction, homelessness and other issues as “a moral failing rather than a systemic issue.” Councilmember Krystal Marx agrees, noting the public can often view those caught up in the criminal justice system as people who have “failed in some way; don’t enable it.”

The LEAD program grew out of court battles in the early 2000s between the Public Defender Association and the Seattle Police Department, which found that a disproportionately high number of African American drug offenders were being sent to prison. Funded by private donors at $950,000 a year, the program launched in 2011 as a four-year experiment in Seattle’s Belltown neighborhood.

In 2015, a University of Washington study found that LEAD significantly reduced recidivism, with people in the program 58 percent less likely to be arrested again. In fact, the program was considered such a success that other cities started using it, including Los Angeles, San Francisco, Brooklyn, New Orleans, Houston, among others.

And now it has come to Burien. Johnny Schilling, a LEAD supervisor for more than two years, has been working on implementing the program in the suburb. Schilling said officers have already identified about 25 people in the community, the vast majority of whom lack stable housing, who could benefit from the program. 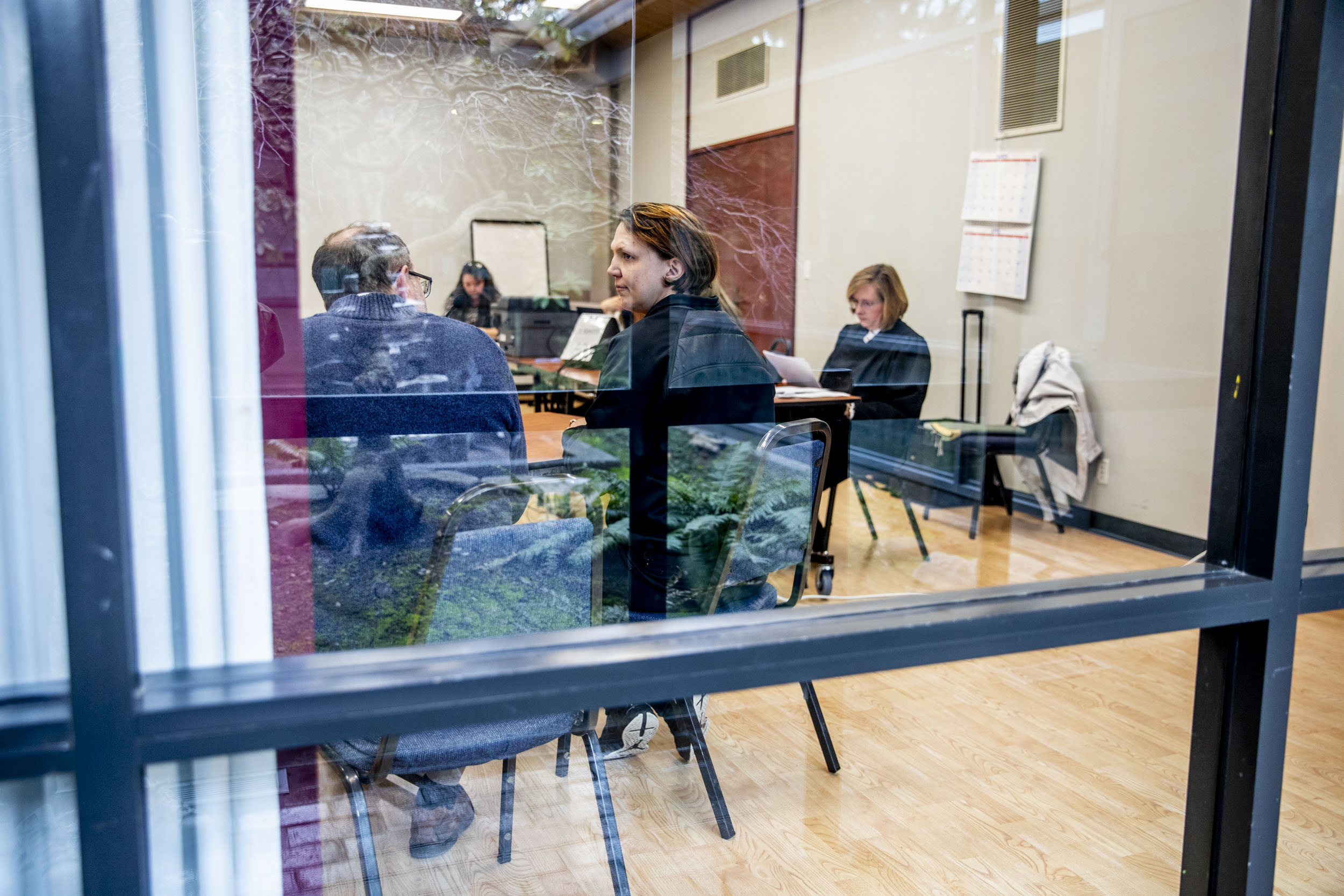 Tabitha Sowards attends community court in Burien on March 11, 2019.  Sowards was the first official participant in the court, which was launched in February.

Tabitha Sowards attends community court in Burien on March 11, 2019.  Sowards was the first official participant in the court, which was launched in February.

Malika Lamont, a project manager with LEAD at the Public Defender Association, said it's estimated that police officers will eventually identify approximately 100 people in the community. Lamont noted that the LEAD program in Burien is citywide, unlike in Seattle, where it is only employed in select precincts. In total, more than 700 individuals have been accepted into Seattle’s LEAD program, but Lisa Daugaard, director of the Public Defender Association, said police and community partners are “ready to refer far more individuals than we presently have the capacity to staff. So we are working with those partners to prioritize those for whom case management and care coordination will be most impactful.”

In Burien, three police officers and a sergeant are working on LEAD's implementation in part by helping identify people who might best benefit from the program.

The “officer is on first-name basis with this person and just wants to see something different for them,” Schilling said.

Schilling said so far he has been “legit very impressed” with the Burien officers working with the community on the program.

“Everybody has been very, very into it,” Schilling said. “I’m kinda awestruck on a regular basis. … They view the folks that we’re working with as part of the community.”

The program is being assisted by an existing network of service providers, including Transform Burien, a faith-based initiative that provides food and clothing, and Union Gospel Mission, which has provided a mobile shower unit.

“Our goal is not to reinvent the wheel. Our goal is to work with the resources already there and help run things more smoothly,” Schilling said.

The point, he said, is that participants in the LEAD program should be able to prioritize their needs “rather than the goals we would like to prioritize for them.”

That social services network is also seeing growth. Navos, based in West Seattle, opened a branch in Burien in 2012, providing mental health support for a variety of people, including those with mental illness, addictions or who have suffered from abuse.

More recently, shelter-provider Mary’s Place converted an old hospital and opened a facility in Burien that can house up to 200 individuals. The facility, modeled on the provider’s nine other locations throughout King County, can house families with children who have complex medical needs.

Another King County program that recently expanded to Burien is the community court and the Burien Community Resource Center associated with it. Redmond was the first King County municipality to have a community court, and officials plan to launch one in Shoreline by the end of this year. The three courts share nearly $1 million in funding for approximately the next two years.

Judge Donna Tucker, chief presiding judge for King County District Court, explained that King County made the decision to adopt a community court model a couple years ago and that the ultimate goal is to have one in seven locations around the county. Burien was attractive because the city offered both the Burien Community Center as a location and security.

Now prosecuting attorneys and public defenders can refer those who commit theft or trespass, as well as those who have mental health and substance abuse issues in Burien, to the court. There, participants will agree to a contract, typically three to four months long, that requires them to check in regularly and meet with service providers, though, unlike in LEAD, they are not assigned a case manager.

Also unlike with LEAD, charges have already been filed to those assigned to the community court. Those charges will be dismissed if the client abides by the contract.

The court, which is open on Mondays, has so far had 12 participants and one graduate. It averages about 16 visitors per week.

Tabitha Sowards, 33, was the Burien community court’s first client. She was arrested for trespassing after she was caught panhandling in the parking lot of a store.

“I actually like it,” Sowards said of her experience with the court. “It’s much better than regular court.”

Research findings suggest Sowards might not be alone. At a community court in Brooklyn, New York, called the Red Hook Community Justice Center, a recent study found adult defendants whose cases were handled at the Red Hook center were 10% less likely to commit new crimes than offenders processed in a traditional courthouse. Juvenile defendants were 20% less likely to reoffend.

“They’re just really excited to see people have the opportunity to get help outside of them,” Welbaum said.