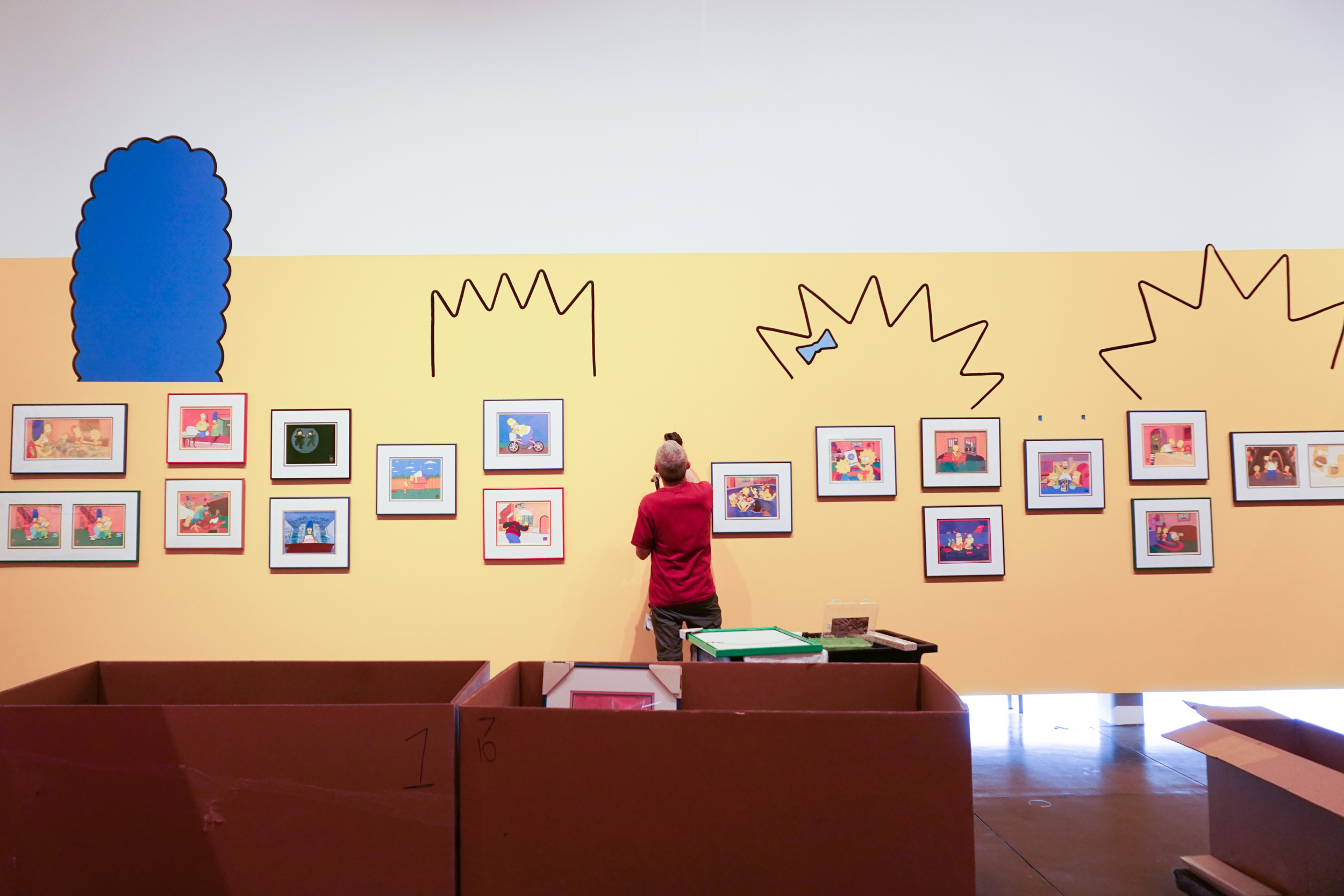 Bill Heeter was fresh out of college in 1981 when he bought his first hand-drawn animation celluloid (cel) by Chuck Jones. Jones is the Spokane animator who worked for Warner Bros. beginning in the 1930s and is famous for his illustrations of Bugs Bunny.

“I remember my hand shaking as I was writing a check for $100 for a cartoon animation,” Heeter says by phone.

It was the beginning of a lifelong hobby that would eventually lead him to showcase the work of another Pacific Northwest cartoonist, Matt Groening, at the Tacoma Art Museum. Groening is the cartoonist and creator behind the often dysfunctional, yet endearing, Simpsons family — Homer, Marge, Lisa, Bart and Maggie — that has captured the minds and hearts of the public for 30 seasons. The museum exhibit will show more than 150 cels of hand-drawn art starting from when The Simpsons was still just a short on The Tracey Ullman Show all the way through 2002’s Season 13, which is subsequently when The Simpsons moved to digital animation.

TAM will be the first museum in the country to feature animation art solely from the longest-running TV show in the U.S., according to Heeter. The museum joins a long list of other local galleries and museums like Bellevue Arts Museum, The Frye and the Anne Focke Gallery at Seattle’s City Hall that are embracing cartoonists.

The cels in the exhibit come from Heeter’s personal collection of more than 900 Simpsons animations, which he started collecting in the early ’90s.

“I had a full head of hair when I started collecting and now it's all gone,” he says.

A year ago, Heeter, based in Colorado Springs, Colorado, had the urge to showcase his Simpsons collection. His wife, who is based in Tacoma, told him to “quit complaining” about it and call TAM, which is what prompted curator Margaret Bullock to jump on a plane to Colorado and begin picking out which cels to display.

“We have this history of exhibitions of artist illustrators and trying to elevate people’s ideas about that art form,” says Bullock, sitting on the second floor of TAM with a view of the Tacoma Dome, federal courthouse and East 21st Street Bridge as her backdrop.

TAM focuses on art from the Pacific Northwest, so when Bullock realized just how robust the cartoon, comic and animation scene is in the Seattle area, she felt it was relevant to host this exhibit and talk about the art form. This is the first cartoon exhibit the TAM has ever shown in its 84-year history.

“I’m an animation nut and have been all my life and have watched The Simpsons since The Tracey Ullman Show, so it all just came together,” she says.

Bullock points out that the exhibit is completely independent from 20th Century Fox, which owns the copyright to The Simpsons, making it an “unauthorized” exhibit, a tongue-in-cheek reference to the rebellious-without-a-cause attitude Bart Simpson has become known for.

While the exact location of the Simpsons’ hometown of Springfield has always been a mystery, Bullock says Groening’s Pacific Northwest roots — he was born in Portland and attended Olympia's Evergreen State College — definitely informed and present themselves in the show’s characters and plots. Similarities include the nuclear power plant that mirrors Washington’s own power plants, to Lisa Simpson’s environmental wokeness, to Bart Simpson’s rough-and-tough demeanor that is reminiscent of local Tacoma skater’s pride for their town’s moniker “Grit City.”

“[Matt Groening] is always very coy about where Springfield is, but finally a couple years ago in an interview he said it was in the Pacific Northwest, and he took it back immediately,” Bullock says. “The whole idea is to keep it generic.”

Bullock doesn’t know whether Groening will ever make it to the exhibit, but Heeter says he wouldn’t be surprised if some Simpsons collaborators show up and peek their heads in to see how the exhibit highlights the art form.

“I’m hardly an art critic, but I do think I like collecting these cels because of the nuance —  the line work, the hand-drawn aspect of it,” Heeter says. “I don’t think you can computer-generate as well. I’m not trying to take away from digital animation, but you look at the episodes of The Simpsons now and the lines are consistent. I like the old look.”

More so than anything, the art on the brightly painted walls of the exhibit are meant to evoke feelings and memories, whether it’s laughter or empathy.

“We as an art museum want to show how artists communicate and how artists are trying to talk to you through their images and what they’re trying to convey,” Bullock explains. “With animation it’s the same thing: How do you tell a joke using pictures? What type of story can you tell?”

Like the cel of a dirty, beat-up teddy bear, drawn from multiple angles, Bullock says. It’s hung below a hand-drawn picture of Maggie, with her sucker, holding that same bear.

The cel is from one of Bullock’s favorite episodes, “Rosebud,” a spoof of the film Citizen Kane that also features Mr. Burns, the evil and greedy nuclear power plant owner. The bear was actually once his until he abandoned it for the opportunity to be rich. Maggie gets the bear, "Bobo," decades later.

The bear speaks to a time when Mr. Burns was a child — and nice. He does everything in his power to get it back. Despite all his schemes Maggie doesn’t budge and Mr. Burns gives up, telling Maggie to “hang on to that bear. Don’t make the same mistake I made.” She takes pity on him.

“She gives it back to him,” Bullock recalls while holding her heart. “It’s just one of those episodes that gets you.”