Following similar efforts at newsrooms across the country, employees at Crosscut/KCTS 9 move for representation with the Pacific Northwest Newspaper Guild. 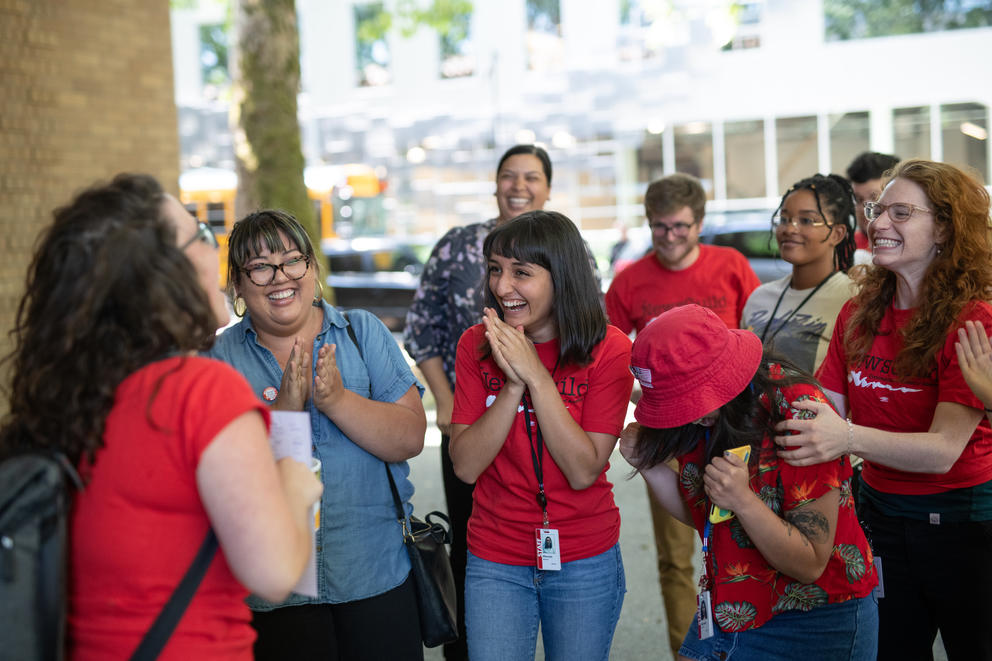 Crosscut and KCTS 9 staff members celebrate on Wednesday, July 31, 2019, outside the Cascade Public Media office in Seattle after newsroom workers voted unanimously to unionize. (Photo by Grant Hindsley for Crosscut)

This story was independently produced by a team of Seattle-based freelancers: reporter Hallie Golden, editor Levi Pulkkinen and photographer Grant Hindsley. Senior management at Cascade Public Media, the parent company of Crosscut/KCTS 9, did not review this story before it was published.

Driven by skyrocketing living costs and what they say are unsatisfying wages as well as a desire for a stronger hand in shaping their workplace, journalists at Crosscut/KCTS 9 on Wednesday joined a growing list of media workers seeking collective bargaining rights with a unanimous vote to form a union.

At least 19 newsroom employees at Crosscut and KCTS 9, Seattle’s PBS affiliate, will now begin negotiating a contract with Cascade Public Media, the nonprofit operating both public-interest news operations. While concerns about pay sparked the unionization effort, workers said the driving factor was their desire to have more say on workplace issues ranging from stronger health care benefits to transportation.

“It’s phenomenal,” Crosscut reporter Josh Cohen said after the results were announced Wednesday afternoon. “It’s better than I would have even hoped. Sixteen out of 16 people voting ‘yes’ sort of says it all.”

Three eligible employees did not participate in the vote.

The vote was held midday in a meeting room of the company office in Seattle’s Lower Queen Anne neighborhood. Representatives from Cascade Public Media and the National Labor Relations Board watched as newsroom staffers trickled in to fill out their paper ballots. By 1:15 p.m., the results were in.

“Guys, it’s (expletive) unanimous!” Dorothy Edwards, a Crosscut photographer, announced to a crowd of employees waiting for the results. They cheered as Edwards took a selfie.

After the vote, Rebecca Farwell, senior vice president and chief operating officer at Cascade Public Media, said in an email that the company’s “focus is on moving forward together.”

“Our editorial team will continue to produce the same high quality, award winning journalism that our community knows and trusts,” Farwell said. “We believe in our journalists and the work they do every day.”

While unions have been a major presence at print publications for decades, digital media outlets such as Crosscut had not yet organized. Recently, though, online news workers around the country who are concerned about pay, job cuts and an overall lack of control have sought collective bargaining rights.

Since Gawker Media (now Gizmodo Media Group) employees voted to form a union four years ago, dozens of online publications have followed suit, including Salon, HuffPost, Vice Media and The Dodo, thus breaking from the larger national trend away from unionization. Since 2015, about 30 digital newsrooms have unionized, according to a January report in the Harvard Business Review. Researchers estimate the raw number of union workers in online publishing has risen 20-fold since 2010.

Unionizing can have a positive impact on news organizations, especially when employees become invested in an outlet’s mission, according to Charlotte Garden, associate professor of law at Seattle University specializing in labor and employment law.

“When I look at the number of journalism jobs that have disappeared over the last several years, it makes total sense to me that people would respond by trying to look to — I hesitate to say solutions, because it’s clearly not a total solution — but to look for ways to have more control over their work lives that unionization can offer,” Garden said.

Crosscut and KCTS 9’s newsroom will now join the ranks of other unionized Seattle newsrooms, including The Seattle Times, which has been represented by the Pacific Northwest Newspaper Guild for more than 80 years. A union spokesperson said Guild members and The Seattle Times Co. are currently negotiating a contract to replace one that expired on March 31.

KUOW’s newsroom workers recently signed their first contract after forming a union in 2018. The contract, which went into effect July 1, raises the lowest-paid employees’ wages and guarantees annual increases in pay, according to a union press release.

The regional Newspaper Guild, which is part of the national labor union NewsGuild-CWA, will now represent the Crosscut and KCTS 9 newsroom workers. Crosscut, an online news site launched by Seattle Weekly founder David Brewster in 2007, merged with KCTS 9 in 2015 to form Cascade Public Media.

The issue that kicked off the unionization effort was pay, said Lilly Fowler, a reporter at Crosscut who has helped to lead the effort since last fall. Fowler said she and reporter David Kroman, after hearing the findings of a newsroom-wide salary review conducted for Cascade Public Media, came to believe newsroom pay was not keeping up with the cost of living in Seattle and did not align with employees’ experience levels.

Fowler has 10 years of journalism experience; before joining Crosscut she worked in public broadcasting in Washington, D.C. She said she took a $12,000 pay cut to come to Seattle, but her living expenses haven’t changed.

“I feel like there’s a good portion of Seattle that hasn’t quite caught up to the cost of living,” Fowler said.

The average annual pay for editorial team members included in the bargaining unit is $61,000, according to Cascade Public Media.

Fowler and Kroman’s conversations about pay quickly evolved into broader discussions about the newsroom wanting a say in company policies. By January 2019, they, along with other newsroom employees, started meeting about the possibility of unionizing.

“We’ve grown a lot, which is great,” Fowler said. “We have a lot of new staff; we’re stronger now as a news organization. We’re all really proud of that.

“I think we just felt like it was the right time to step in and say, ‘Hey, we want a seat at the table, too, to determine some key policies for everyone, and make sure everyone is being treated fairly.’”

Fowler said workers’ concerns include transportation; they hope to find a simpler, more cost-effective way for reporters to get around than the company's aging vans and their personal vehicles. She said they also want better health care benefits and for work expenses to be reimbursed more quickly.

“We’re doing this because there were editorial team members who did not sign on to the Union Mission Statement,” Tomascheski said in an email, referring to a document signed by 18 employees that expressed a desire to form a union. “With a secret ballot election, every employee gets to express his or her position on whether to be represented by a union.”

The newsroom employees will now need to create a bargaining committee in order to negotiate a contract. It could be weeks before negotiations begin, Sherman said, given the amount of information they need before getting started.

Cohen, the Crosscut reporter, said he hopes this negotiation is positive for both newsroom workers and Cascade Public Media.

Correction: An earlier version of this report misstated two Crosscut reporters' experiences with a company salary review. They did not read the report.
>