Death and taxidermy: How a quirky author mined guts and grief to write a bestseller

A Q-and-A with author Kristen Arnett about her novel Mostly Dead Things. 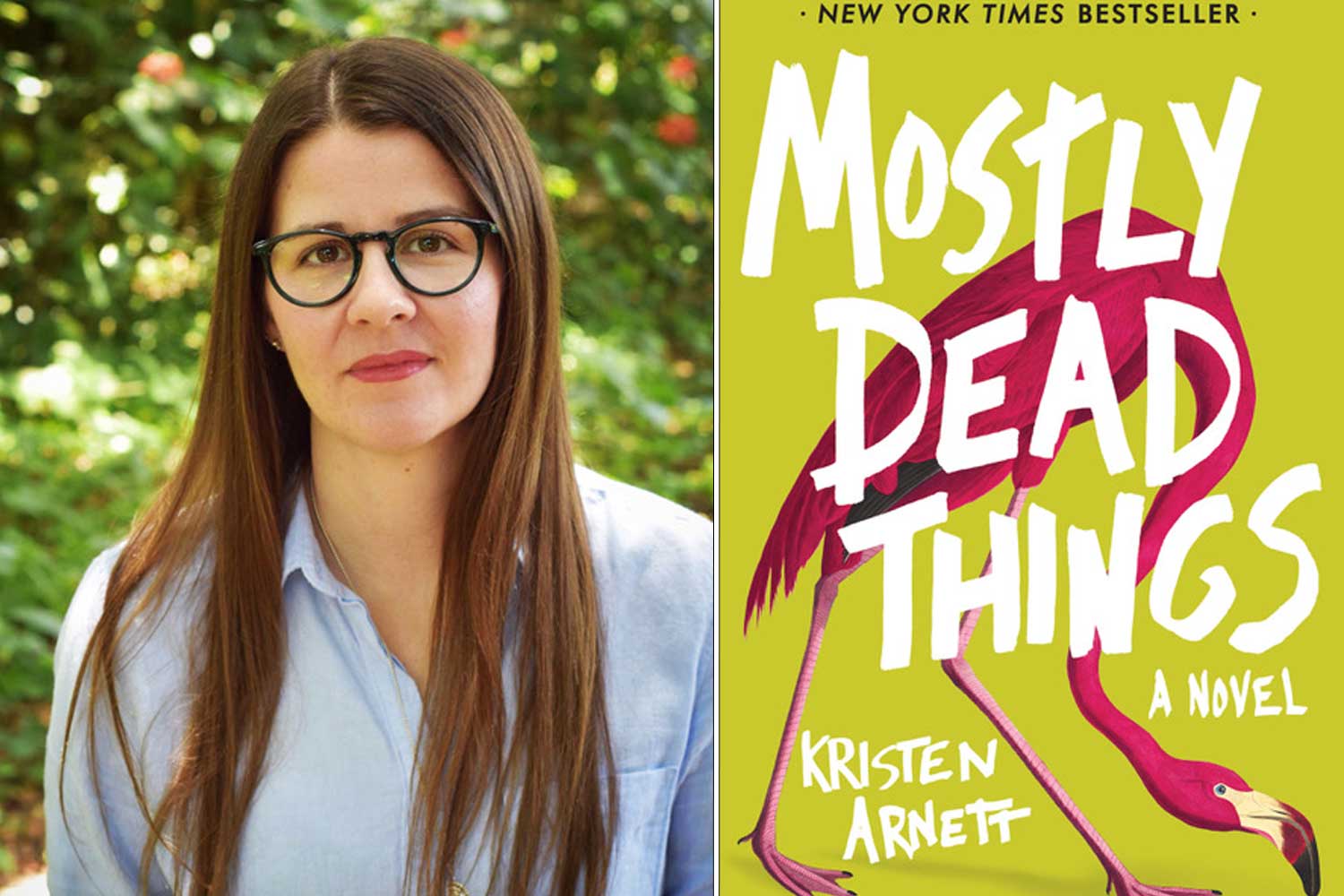 Kristen Arnett will give an author's reading about her Mostly Dead Things novel at Elliott Bay Book Co. on July 23.

“A librarian walks into the 7-Eleven” might sound like the beginning of an odd joke, but it’s actually novelist Kristen Arnett’s morning routine in a nutshell. That’s at least what one gleans from her popular Twitter account, where the self-described “7-Eleven scholar” talks about the importance of both the store and her job in delightful detail. Arnett even held the debut party for her 2017 collection of short stories, Felt in the Jaw, at her local 7-Eleven.

By the time she debuted her first novel, Mostly Dead Things, in June. Arnett’s audience had long outgrown the confines of a convenience store (she picked a record store in Orlando, Florida, for her novel’s launch party because it could pack significantly more people). In July, the novel about a woman left picking up the pieces after her taxidermist father commits suicide landed on the New York Times bestseller list — a first for Portland-based publishing house Tin House Books.

Although Arnett expertly slices open the carcass of a family left stupefied after death, thus laying bare its guts and grief, Mostly Dead Things teems with life and, at times, even hope.

“Because life is messy and hard and ugly and dirty and bloody and gross and vomity,” says Arnett, who will read from her "gay Florida taxidermy baby" of a novel at Elliott Bay Book Company on Tuesday. She spoke to Crosscut about Florida as a character, being a queer writer and how bad internet taxidermy memes “spiraled” into her bestselling novel.

From the book, I got the sense you had an intimate knowledge of taxidermy. Have you done it yourself?

No. It sounds very interesting but it’s kind of an expensive thing to do. You usually have to have a whole room dedicated to it because you’re opening up, you know, a dead animal and [you’re] disposing of innards, and you have to have a lot of chemical solutions like tanners and acid baths, and you can’t just use a knife out of your kitchen.

Before I started writing this particular story, I was — I don't want to say I was obsessed — but I was very into looking at really bad taxidermy pictures online that had cropped up on Twitter. They just were very funny to me. At the Kenyon Review Writers Workshop, I started writing a short story about a brother and sister who taxidermy a goat and wind up completely ruining it. It was the first time I wrote something where when I was done with the story, it didn’t feel like I was done. I was still interested in the people. So I was like: Scrap the short story! And I started doing a ton of research.

I was trying to do a specific kind of taxidermy from a while ago, maybe the ’70s, early ’80, so I ordered these retro taxidermy manuals. I watched a lot of YouTube videos and went on a lot of web forums or chat rooms where taxidermists could trade tips and tricks because I wanted to see how people actually talked. Are they using technical terms? Is there slang? I wanted to talk about taxidermy in this very detailed way, make it seem as visceral as I [could]. I didn't want it to be an aside.

I read that you titled your book even before the research. Why “dead things”?

I'm a person who always titles work first. Sometimes I even say to myself: “If I don't know what I want to call something, maybe that thing isn't ready to write about.”

I was talking with somebody not that long ago where they were like: What is it like writing about and living in Florida, this place where people come to die? That’s not normally a way I think about Florida, a place of constant bursts of growth.

So it feels very cyclical. And so, for me, writing Mostly Dead Things is this feeling of Florida going on around you, which is like alive and dying and rebirthing, but also the people living there and how they interact with each other, and how sometimes we feel like maybe we are a little bit dead inside.

I think Florida is like a sensory experience. It feels like hands pressing on you, or hearing the cicadas startup, or the frogs, the smell of how water sits in lakes or puddles in a backyard. The tactile-ness was also very present to me in the taxidermy.

The taxidermy acts as multiple metaphors. Reconstructing the image of a person after they are gone, images of control and power. A cliché, perhaps, but is it also similar to writing?

As the book progressed I very much had this feeling of taxidermy being this … this kind of scraping out of things and trying to figure out what we mean or what something’s supposed to look like.

Taxidermy is also this way of preserving a memory, but the memory isn’t necessarily like a real memory. You're getting something in a specific kind of pose, and you're keeping it as a trophy, a memory of this thing. A lot of times that memory is fictionalized because that's how memory works.

Jessa, the main character, is gay, though that’s not what propels the story. Your book is described as a “queer novel.” That never happens for “heterosexual” novels. Meanwhile, you call the novel a “lesbian domestic.” What's your take on the "queer" label?

I did not want this to be a coming-out book. That's like one part of a story, right? It usually involves trauma. I [also] wonder who it’s for. Especially if it’s something that’s just trauma, it looks like it's something that's not necessarily written for a queer reader, but a straight audience. That’s not something I’m interested in writing or reading. I want to read stories where the person happens to be gay and has a lot of other things going on.

Besides being a queer writer, being a librarian is also a prominent part of your bio. How has that work influenced your writing?

So much about librarianship is about serving the public, about helping people. It’s serving your community; opening yourself up to something bigger than you. That is helpful for [my] work because you're able to see outside of yourself. Sometimes writing can feel like a silo, a very solitary thing. Library work is the exact opposite of that. You're allowing yourself to be this conduit so people can not only get information but [also] get the things they need. It has only helped my work. I think when you're really listening to other people, especially in your community, that could only do good things for you.

Plus, a powerful show of paintings in Georgetown and more bookish art around Puget Sound.