Fearing deportation, parents make plans for children who could be left behind

Undocumented immigrants are preparing for the worst by assigning guardians for their children. 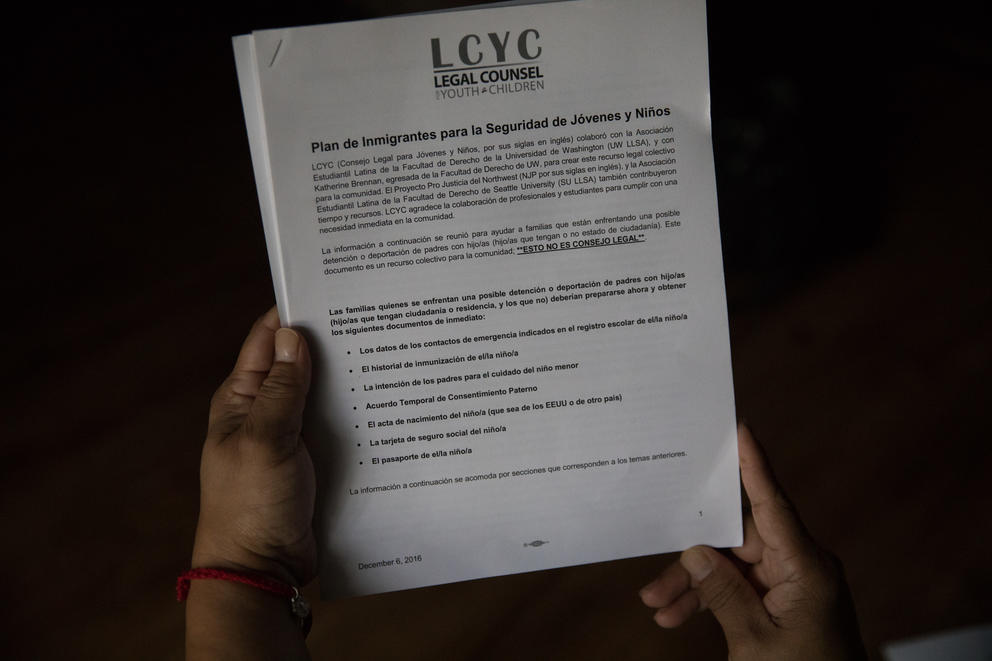 The 34-page "safety packet" allows parents at risk for deportation to designate a caregiver for their children in the event that they are removed from the country. (Photo by Matt M. McKnight/Crosscut)

For weeks, the Trump administration threatened that immigration officials would soon begin detaining undocumented immigrants en masse and deporting them. Officials said that the sweeps would be focused on individuals who have received deportation orders, but that undocumented immigrants who happened to be in the wrong place at the wrong time could also end up detained and deported.

On Sunday, U.S. Immigration and Customs Enforcement began making good on that threat, arresting people in several cities across the country. Although only a small number of arrests have been reported so far, officials said additional raids would occur throughout the week.

The planned raids may be the most intense effort yet by the administration to remove immigrants without proper documentation from the country, but the president has been making similar threats since the day he launched his presidential campaign in 2015. The rhetoric has been nearly constant since, and deportations are now on the rise, though they have not reached the numbers seen during the beginning of former President Barack Obama’s second term.

Already, the administration has received searing criticism for separating children from their parents at the southern border under Trump’s zero tolerance policy. Yet there is another kind of family separation that can happen to immigrants already settled in the United States. Some of these undocumented individuals are parents of U.S. citizens, children born in the United States who have never known life anywhere else and who intend to stay.

The question many advocates have asked then is: What happens to the children once the parents are gone?

That’s what Chach Duarte White, an attorney with Legal Counsel for Youth and Children, began wondering right after Trump’s inauguration.

White said she asked immigration advocates, such as Jorge Barón of the Northwest Immigrant Rights Project, how parents might prepare for their possible deportation, especially with regard to the fate of their children.

“And he said, well, there’s no plan,” White explained. Parents who are deported might not immediately know what has happened to their children. Some, for example, might be picked up by Child Protective Services and forced to stay at a hotel or put into foster care. Federal law holds that a child becomes eligible for adoption after 15 consecutive months in state custody.

A 2017 study found that between 2001 and 2015, the percentage of Latino children in state foster care systems increased 15% to 21%, due to greater immigration enforcement.

Concerns over the fate of these children have been amplified by reports that the federal government has lost track of some of the children recently separated from their parents at the border. Reunification of some families has been stymied by the fact that authorities do not know which juvenile holding center or foster care provider contracted by the federal government’s Office of Refugee Resettlement houses specific children. The government is currently holding approximately 12,000 migrant children.

So “a lot of us were trying to figure out what we can do,” White said.

The main purpose of the safety packets — a 34-page set of notarized documents — is to designate a caregiver for children who might be left behind in the U.S. after a parent has been forced to return to another country.

“Ideally, this is a person who can pick up and care for the child(ren) immediately if you are taken into custody, so the child(ren) is not referred to child protective services and/or placed in foster care,” one page of the packet reads.

White said it took several weeks to put together a version of the safety packets, which were then translated into four or five languages. Legal experts say the paperwork, however, should always be filled out in English so that authorities are able to follow the directions. The safety packets were created in 2016, but then revised to include additonal consulate information after the Trump administration called for restrictions on travel from five Muslim-majority countries.

To encourage parents to participate, White has teamed up with immigrant-rights organizations across the state, such as El Centro de la Raza. School districts and churches also have helped try to reach parents. And immigration advocates and legal experts, such as Colectiva Legal del Pueblo (People's Law Collective) in Burien, have helped run clinics in Latino-heavy areas where they’ve been able to successfully talk with families who may benefit from the packets.

White recommends that staff working with families on the forms have a box of tissue with them, since parents often become emotional just thinking about the possibility of being separated from their children.

Yet White and other advocates say it hasn’t necessarily been easy to persuade undocumented parents to prepare and sign the forms. White said parents who are approached often have “a very nervous and upset reaction.”

In addition to fears over unintended consequences of filling out the forms, some parents struggle to find anyone who is willing to take on the responsibility of caring for their children during their absence, especially since, ideally, the designated caregiver should have legal status in the United States. Others vulnerable to deportation might also have a spouse who has already been deported, making it more difficult to arrange aspects of a child’s life when the signature of both parents is required.

The assigned guardian is intended to be temporary, with either the parents eventually returning to the United States, or the child being sent to the country of deportation. The paperwork is detailed, asking about immunization records, whether religious decisions, haircuts and piercings are authorized, and making other parenting choices when mom and dad are gone for months or more.

The instructions on the safety packets recommend that parents talk to the children about the emergency plans and that the child keep a copy of the forms, perhaps in their backpack.

Crosscut spoke to a mother of three boys in Maple Valley who had prepared the safety packets for two of her sons. Her oldest son, a teacher, is a recipient of Deferred Action for Childhood Arrivals, otherwise known as DACA. Her two other boys, however, were born in the United States. Because she and her husband, an apartment maintenance supervisor, are both undocumented, they have made arrangements so that the children can remain in the United States under the supervision of an uncle in the event of their deportation back to Mexico. The parents asked not to be identified.

The mother, who has worked the late shift at McDonald’s for 13 years, says she worries in particular about her youngest son, 14, who was diagnosed with attention-deficit/hyperactivity disorder after having problems in school and who, in addition to attending therapy, takes two kinds of medication every day.

“It’s scarier now,” she said in an interview in Spanish while sitting in her three-bedroom apartment. She said not making these kinds of preparations would be “like giving away my children.”

“I’m not afraid that they get me,” she said, referring to ICE. “But I’m afraid for my family.”

White estimates hundreds of Washington families have prepared the safety packets. Immigration lawyers and advocates, such as the Shriver Center on Poverty Law, have also inquired about the forms, wanting to create a version of the packets that would be available in their own states. New York and Maryland also recently passed laws that allow undocumented parents to appoint guardians, making such roles more official. 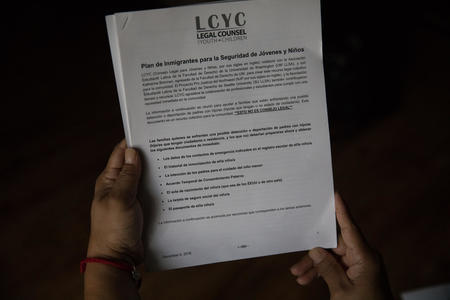 by / January 19
Inside Crosscut