To cut emissions from Seattle's top polluter — transportation — the mayor must go far beyond what she's done thus far to overhaul how the city gets around. 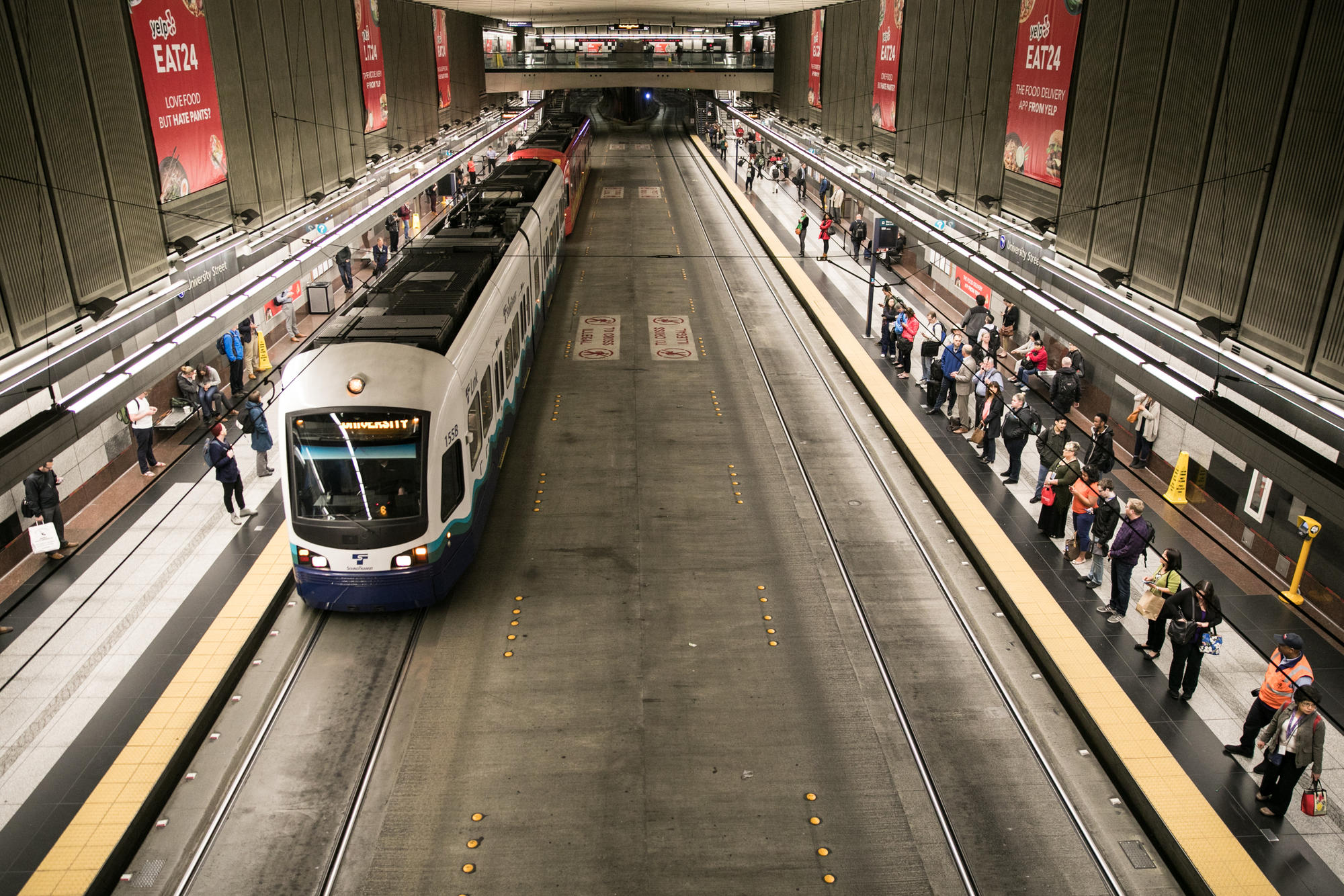 Light rail in Seattle. (Photo by Lizz Giordano for Crosscut)

Every day in Seattle, hundreds of thousands of people make decisions about how to get to work, school, the doctor, the grocery store. Open up your favorite map app. Type in your destination. How long to drive? To bike? To ride public transit? To walk? Travel times from shortest to longest are typically in that order. And public transit isn’t just a tad slower than driving; often, sitting on that bus or waiting to transfer will take a real bite out of your day.

As an able-bodied person who doesn’t own a car and has grown comfortable — perhaps too comfortable — riding in traffic, I’m spending a lot of time on my bike under this calculus. But I understand why most people, out of convenience or necessity, make different choices. I understand why most Seattle commuters still drive to work. And I understand why Apple and Expedia, companies that are probing Seattle’s future with an eye to their bottom line, are betting with their parking spaces that car culture isn’t going away anytime soon.

If they win their bet, we all lose, and the stakes couldn’t be higher. We simply can’t cut carbon emissions to levels consistent with a livable future without radically shifting how people get around. If we can achieve a transportation revolution here in Seattle, we can set an example for the rest of the country. In Part 1 of this Op-Ed, I argued that this will require vision and leadership from the city — and, in particular, from Mayor Jenny Durkan, going far beyond what her administration has shown so far. Here’s what I think the city should do, distilled into a four-point plan.

First, prioritize transit, biking, walking and rolling. The city must recommit to making these noncar options truly viable for as many people as possible, as quickly as possible. That doesn’t mean starting from scratch. It means drilling down on the really quite good plans the city already has developed through years of study and public engagement. It means far more dedicated bus lanes, protected bike lanes, sidewalks and measures to protect people from traffic violence. For starters, the city should take to heart the recommendations just released by the MASS (Move All Seattle Sustainably) Coalition, and make tangible progress toward a green transportation system before the end of this year. (Full disclosure: The Transit Riders Union, of which I am an elected officer, is an active member of MASS.)

Crucially, this means finding not just new funding, but also the political will to reallocate road space — making more room for transit and for people biking, walking or using wheelchairs or other mobility aids. After a century of auto dominance, most of us don’t even notice how much of our public space has been appropriated for cars, or how deeply driving is subsidized and written into our laws. There’s no way to revoke this planet-destroying privilege without making some people angry. The mayor needs to stand firm in defense of projects that shift us toward a sustainable future, even when it’s hard.

After a century of auto dominance, most of us don’t even notice how much of our public space has been appropriated for cars, or how deeply driving is subsidized and written into our laws.”

Second, go big on bus service. Five years ago, Seattle voters passed a ballot measure to fund bus service to the tune of $45 million per year. This also covers free transit passes for many Seattle students and other transit-equity programs. But this funding — a combination of sales tax and car-tab fees — expires next year, and it will have to be replaced to maintain these programs and current levels of transit service. If a countywide ballot measure is put forward, Seattle could supplement it with a city measure; if not, Seattle will have to fend for itself again.

Either way, Seattle should go big and bold on bus service in 2020. The city should propose a measure that can expand service around the clock and to underserved neighborhoods; beef up routes that bring lower-income workers to Seattle jobs from elsewhere in King County; speed up electrification of the bus system; and expand transit-equity programs. While we’re at it, let’s include some capital funding for dedicated bus lanes and signal priority, to improve speed and reliability on bus routes throughout the city so that every service dollar is going as far as possible. Let’s double the size of the measure and make sure we’re using the most progressive funding options at the city’s disposal.

Third, challenge employers to step up. Employers shape the commute choices of their workers through their own choices: Do they subsidize transit passes? Do they encourage driving by providing free parking? Do they offer secure bike storage or a place to shower? Some employers go above and beyond to reduce drive-alone trips, others not so much. Workers and community members can exhort specific employers to step it up, but for rapid citywide change we’ll have to look to government.

The city already has a solid foundation to build upon. Seattle has a state-mandated Commute Trip Reduction Program, which requires some larger employers to track and take steps to shift their employees’ commute habits. Last fall, Seattle City Councilmember Mike O’Brien championed the Commuter Benefits Ordinance, which starting next year will require most employers to enable employees to purchase transit passes through a pretax payroll deduction. We even have an official goal: “Decisive action to meet our goal of 75% of commuters getting to work without their personal cars by 2035 is needed to keep us on track to reach net zero greenhouse gas emissions by 2050.” 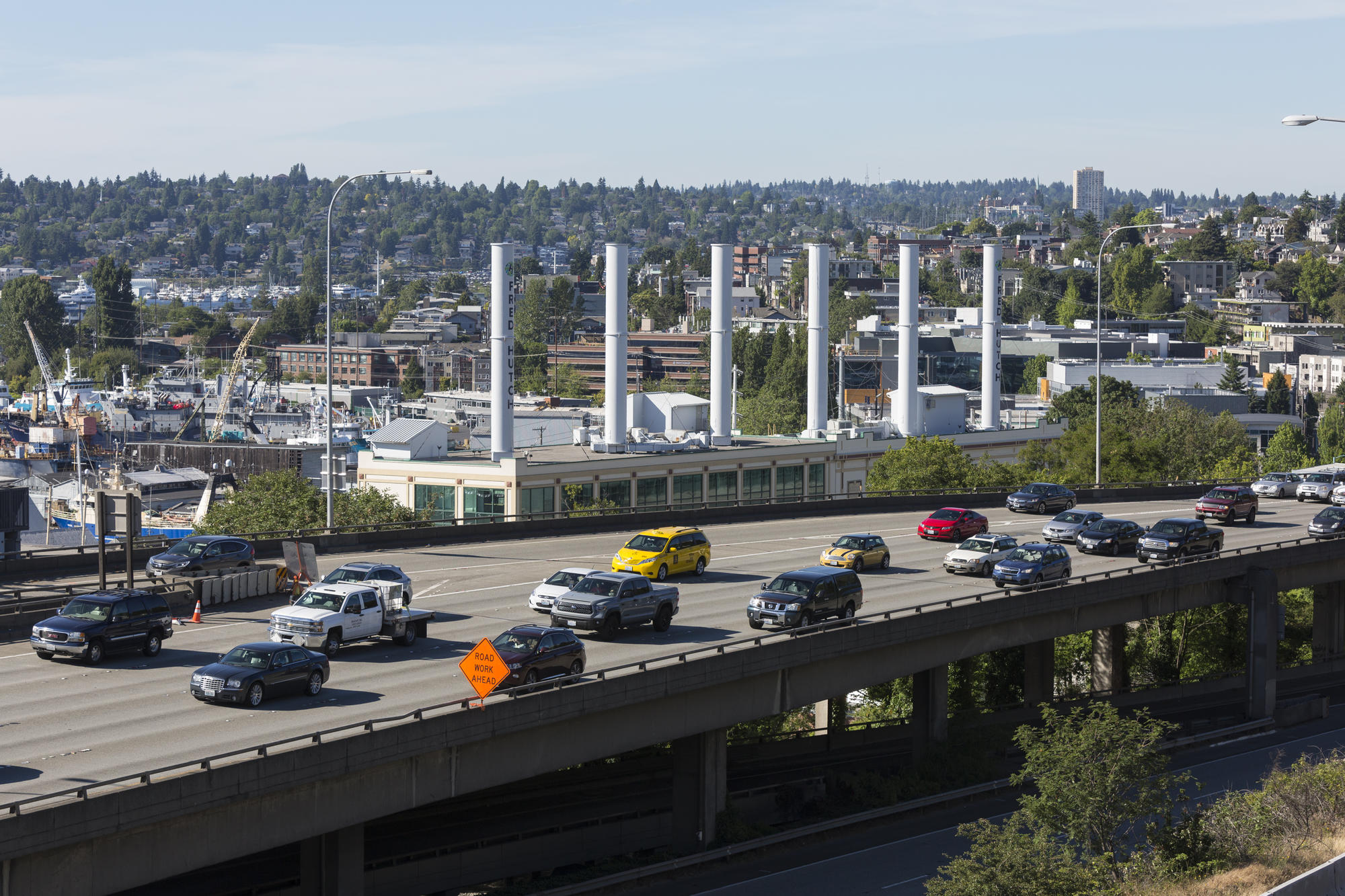 Rush-hour traffic southbound along Interstate 5 between Capitol Hill and downtown on June 11, 2019. (Photo by Paul Christian Gordon for Crosscut)

Rush-hour traffic southbound along Interstate 5 between Capitol Hill and downtown on June 11, 2019. (Photo by Paul Christian Gordon for Crosscut)

With rising emissions and over half of commuters still driving alone, we’re not on track. If we’re serious about eliminating climate pollution by 2030, we’ll need to hit this target a decade earlier, which means we’re really not on track. The city is now updating its Commute Trip Reduction plan — which, incidentally, council members will be discussing next Tuesday. It’s a fine plan as far as it goes, but it isn’t really about climate change or even about shifting away from cars per se. It’s a plan whose grand vision is to maintain rush-hour traffic congestion at more or less current levels over the next 15 years. That’s not a battle cry to quicken the pulse.

There are a number of ways the city could strengthen these programs to shift commute habits more rapidly. Currently, an employer falls under the Commute Trip Reduction requirements if at least 100 full-time employees arrive at a single worksite between 6 and 9 a.m. As it turns out, cars emit greenhouse gases at all hours of the day and night, and 100 workers’ travel choices matter whether they end up at one worksite or several. If we care about climate change, not just gridlock, these criteria could use an update. The city could also build on the Commuter Benefits Ordinance to require that large employers not only offer a pretax option, but also provide transit passes outright — as some already do. Finally, right now there aren’t really any consequences for employers that don’t make a good faith effort to meet the targets or comply with the law. These programs could use some teeth.

Fourth, build massive amounts of affordable housing near transit. Where people live in relation to their daily destinations dramatically shapes their travel options. As long as rent is too damn high, low- and moderate-income families will continue to be pushed to the outskirts or out of Seattle altogether, leaving them little choice but to own and drive a car. The city needs to get far more serious about closing the affordable housing gap so that a vast majority of people can afford to live a short and comfortable walk, bike ride, bus or train trip away from everything they need.

Together, actions in these four areas can add up to a rapid shift in how people choose to travel around Seattle. All four build on success and hard work the city already has accomplished: solid transportation infrastructure plans; a track record of boosting transit ridership — and bucking national trends — by investing in transit service; an effective Commute Trip Reduction program; and even an initiative to support community-driven housing and development projects that prevent displacement. We just need to get far more serious about accelerating and funding this good work.

Future generations will look back at the elected leaders of our time and ask: What did they do to avert climate catastrophe? Durkan still has more than two years to make good on being a “Climate Mayor.” The current city council, fresh off pledging support for a Seattle Green New Deal, has six more months to make some waves. At their backs is an energized community of transportation and climate advocates who would love to celebrate tangible progress. Seattle voters, who approved last fall’s statewide carbon fee initiative by a wide margin, have shown that they’re ready for action. Now is not the time for incrementalism. We need our elected officials to lead a transportation revolution.

When it comes to cars, traffic congestion is a more pressing threat to our quality of life than souped-up rides on public streets.