Our bummer summer has an upside for Washington's parched farms. But rural communities are still bracing for drier summers ahead. 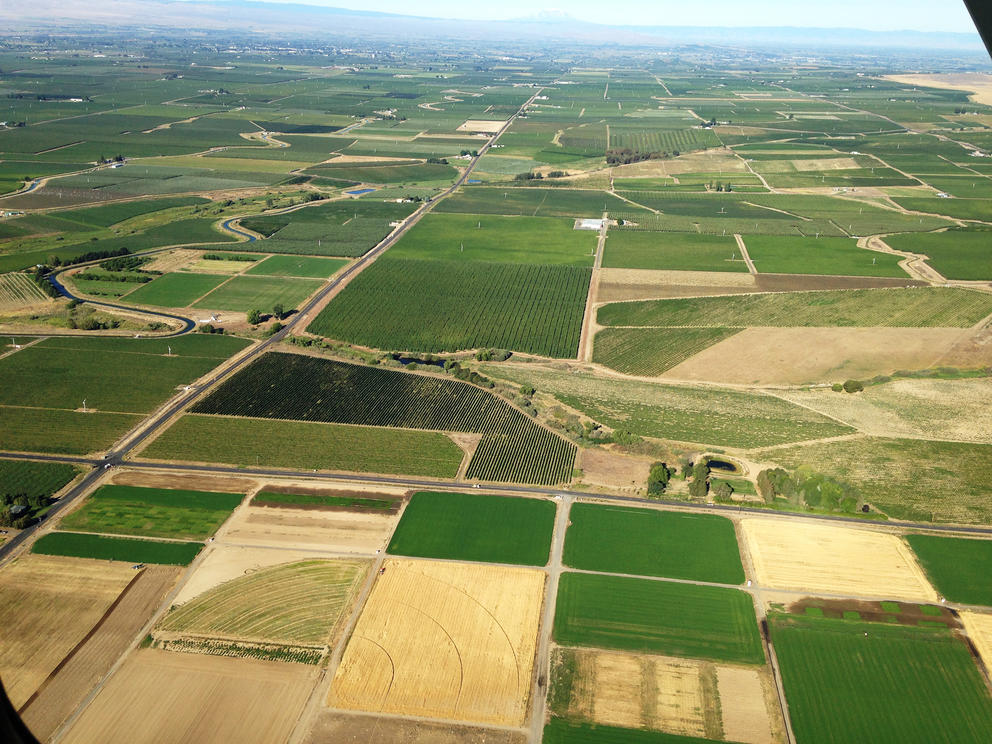 An aerial shot of farmland about 5 miles north of Prosser in the Yakima Valley. (Photo provided by Roza Irrigation District manager Scott Revell)

We may call it damp or humid, but meteorologist Cliff Mass calls this unusually rainy month JAWS, which stands for “July Abnormally Wet System.” And while it might not be ideal summer weather, the rainfall actually might be helping an otherwise dry Washington, almost half of which is in drought.

“It is clear now that this will be one of the wettest Julys in decades for our region,” Mass writes.

Jeff Marti, drought coordinator with the state Department of Ecology (DOE), says that when rainy weather and storms pass through parched areas, it’s like a “liquid lottery” for dried-up watersheds.

“Some watersheds win and some don’t when these systems pass through,” Marti says. Right now in Western Washington, where 27 watersheds are in declared (and still expanding) drought areas as of July 8, this could be a temporary reprieve.

He says this rain boosts river flows, discourages outdoor water use and refreshes parched land. Still, it's not a fix for drought conditions: Spots of rain aren't dependable, and dry areas need days or weeks of sustained rainfall to make a real dent.

Gov. Jay Inslee first declared drought in April and expanded that declaration to cover nearly half of the state by May, most of it in Western Washington. Drought declarations can be made when “a significant portion of a geographical area is below 75% of normal,” which causes hardship for water users, according to state law. The declaration basically enables the state to expedite aid to affected communities. Washington’s last drought was in 2015, when exceptionally low snowpack levels were projected to cost farmers an estimated $1.2 billion in lost crops. This year, the DOE says a combination of low snowpack and precipitation brought a similarly severe dry spell for parts of the state.

With 199 inches of annual rainfall, Forks is one of the wettest spots in the nation, according to the DOE. But this year’s drought has made the town uncharacteristically dry. Forks City Attorney Rod Fleck says it’s only the second time in Forks history that the town has experienced a drought at all. The first was during 2015’s epic drought.

Typically, droughts like these will force smaller towns that rely on creeks or well water, like Forks, to ask residents to voluntarily cut back on outdoor water use. Such actions don't have much impact on indoor water use, like drinking or bathing, Fleck says. But during the 2015 drought, voluntary cutbacks became mandatory — a rare event for Forks.

“In 2015, we then went to initial mandatory restrictions [like] limiting when people could water their yards [and prohibiting] at-home washing of vehicles,” Fleck says. Forks Mayor Tim Fletcher asked residents to voluntarily cut back in June of this year. Under current conditions, Fleck adds: “We’ve got to look at those again.”

Forks Public Works Director Paul Hampton says voluntary water restrictions have been commonplace since he started in his position in 2015. But water levels this year are reminiscent of 2015, and he says the city will reassess whether it needs to impose mandatory restrictions for the second time in four years.

Still, the July rain sweeping through Western Washington offers some hope. “It’s raining right now,” Hampton said while on the phone last week. Sustained rainfall could help; Hampton says it takes a week or so to show up in underground wells. But if the rain doesn’t stick around for more than a few days, it doesn’t make a big difference for the water supply.

For Forks, Fleck says that the rain makes it easier for homeowners to skip lawn watering: “Fortunately, the wet weather pattern has been dumping enough water to help keep yards and plants alive.” It might not restock Forks’ water supply, but it will naturally tamp down the temptation to use water outside.

For other small communities, like Cowlitz County’s Ryderwood, population 395, a little rain can save a town from relying on outside help. Last year, Ryderwood’s water supply, which comes from a small reservoir, dried up. DOE’s Marti says water was almost trucked into Ryderwood. Residents were asked to take shorter showers and brush teeth without running water. But this year, Cowlitz County Public Works spokesman Mike Koelsch says the rain has saved the town, especially after a hot, low-snow spring.

“It would be a huge problem if it wasn't raining because of the dry spring,” Koelsch says.

A history of drought prepares farmers in the Yakima Basin

Not all parts of the state experience drought as an exception. Since Willard Farms and Vineyards was built in the Yakima Valley in the ’50s, Jim Willard says his crops have seen their share of droughts. Three in a row in the ’90s reinforced the lesson to prepare for drier seasons ahead.

“We’ve had droughts in the valley since mankind was out here,” he says. “So it’s one of those factors that you have to learn to live with.”

Crops like hops, apples and wine grapes are grown throughout the Yakima Basin in south-central Washington. Willard says that over the years, the droughts and subsequent water shortages caused his farm to shift emphasis to growing wine grapevines over thirstier apple trees.

Surviving a drought is often complicated by Washington’s water rights laws, which outline water allotments and dictate who gets their supply curtailed first during droughts. The rights are sometimes owned by individuals and sometimes owned by districts, and are usually prioritized with “junior” or “senior” designations.

Revell says farmers who grow crops from trees, which require more water and take more time to recover from drought, plan for shortages like this years in advance by creating backup supplies.

“Some of them have emergency drought wells or groundwater wells they can turn on in a drought,” Revell says. “They spend a tremendous amount on irrigation upgrades.”

But it isn’t a perfect fix: Willard says those wells, often powered by diesel or electricity, are costly to operate.

“It’s really expensive when you push that button,” Willard says. That forces farmers to make hard decisions, and both he and Revell have seen farmers prioritize some crops over others. Roza Irrigation District dairy farmer Jason Sheehan says conserving water can only go so far.

“You can’t predict Mother Nature,” Sheehan says. “As a farmer, you’re making cropping decisions in April. It’s hard to figure out how to make changes when you don’t know what the water situation will be.” He’s hoping that the Yakima River Basin Integrated Plan, a recently funded drought remediation bill, will help with future droughts by increasing water storage in the area.

For now, Sheehan and Willard say farmers have adapted to the Yakima Valley’s conditions as much as they can. Willard says that over the course of his farm’s decades in the area, his family has learned to conserve every drop of water possible: “No water leaves my farm during a drought.”

Some studies speculate that catastrophic droughts like the one in 2015 could become the norm. As a result, the DOE has attempted to reform the way Washington responds to drought by backing a failed bill that would have allowed the state to explore drought responses earlier in the year.

Since the state can take major actions only after a drought is declared, Marti calls Washington’s current approach “emergency response.”

“An emergency framework isn’t practical or successful,” Marti says. “It’s hard to design and implement a project within the context of an emergency.”

Urban Eberhart, manager of the Kittitas Reclamation District, says the Yakima River Basin Integrated Plan’s provisions for water storage are critical to protect farmers from the warmer temperatures and limited snowpack scientists predict for the coming decades. Creating more storage would help in drought years like this one, Eberhart says, especially as slashed water supplies are setting up this year’s irrigation season to end an entire month earlier than usual for his district.

“We’re actually going to be building storage for fish, wildlife and agriculture,” he says, “because it doesn't work for anything not to have water.”

This article has been updated to clarify that the $1.2 billion loss for farmers in 2015 was a projection.