It just got easier to wipe that weed conviction off your record in WA. Here’s how 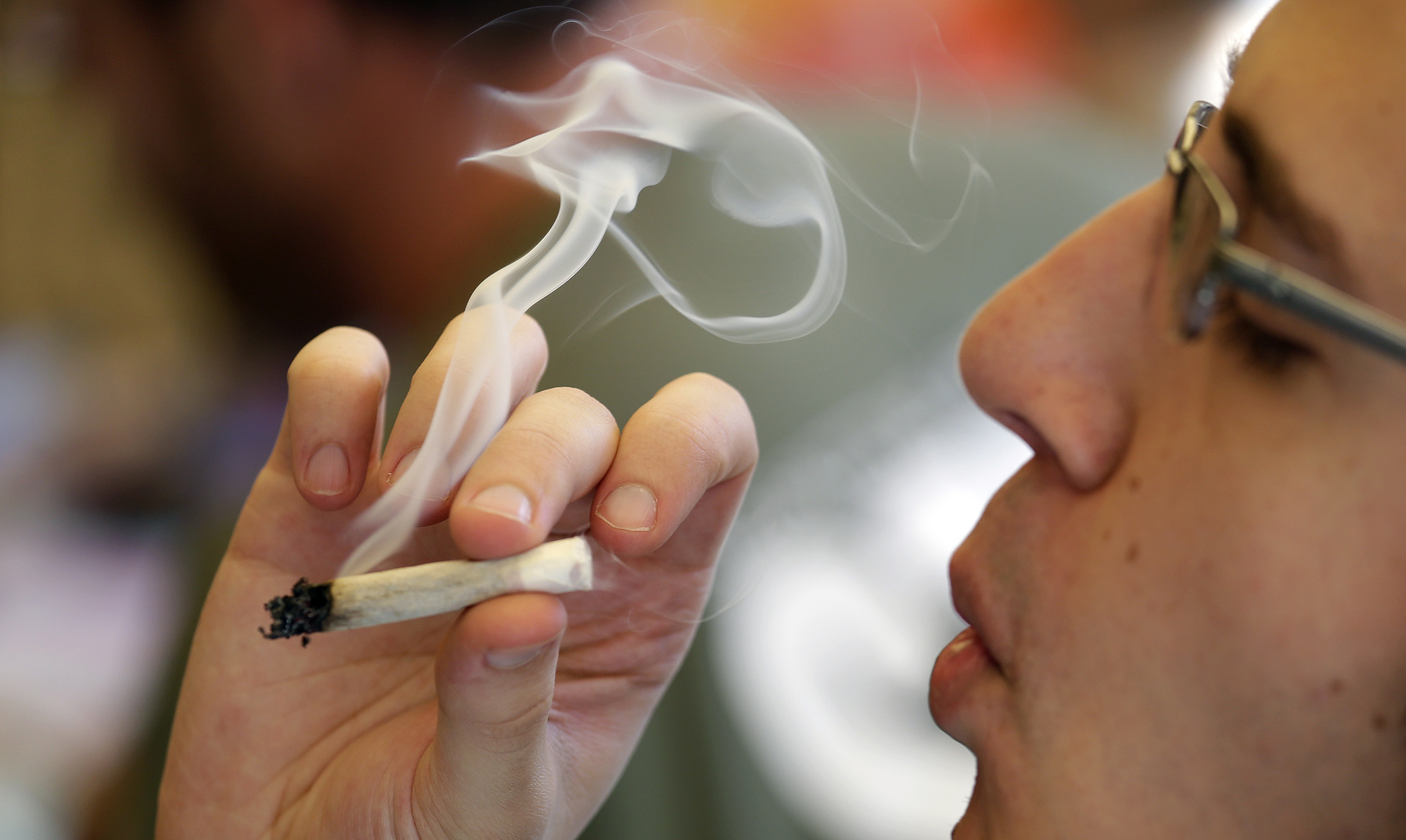 A man smokes a marijuana joint at a party celebrating weed in Seattle, April 20, 2016. (Photo by Elaine Thompson/AP)

More than six years have passed since Washington voters approved legalizing marijuana use for adults 21 and older. Yet for thousands of people, past convictions for possessing the drug continue to follow them.

For many in Washington state, that won’t have to be the case anymore. Starting this week, a new state law will allow people convicted of possessing marijuana before it was legalized to wipe their records clean.

Under Senate Bill 5605, those convicted of marijuana possession in Washington state can apply to have those misdemeanor convictions vacated from their record, as long as they were 21 or older at the time of the offense.

Unlike in the past, courts will be required to vacate the convictions — regardless of whether people have had other convictions vacated before, or if they’ve committed additional criminal offenses since.

More than 68,000 people in Washington have misdemeanor marijuana convictions on their records and are eligible to have those convictions vacated under the new law, according to the Washington State Patrol.

The process is straightforward, said state Sen. Joe Nguyen, D-West Seattle, who sponsored SB 5605 in the Legislature earlier this year.

To get started, a person needs to visit the court where the criminal sentence was handed down and fill out a formal petition.

“You go there, you apply to vacate the conviction, and they have to give it to you,” Nguyen said.

Nguyen said it was important to pass the measure to help address the disproportionately high rates at which people of color — especially Black people — have been prosecuted for drug offenses over the years. “I just believe that was the most egregious examples of inequality in our society,” Nguyen said this week.

For state Rep. Joe Fitzgibbon, D-Seattle, it simply didn’t make sense to have people continue to face serious consequences for an offense that Washington state law no longer considers a crime.

“There are a lot of people who have a conviction on their record that makes it harder for them to do a lot of things that we take for granted, like get an apartment or apply to college,” said Fitzgibbon, who sponsored a version of the legislation for several years in the state House. “If the voters of the state have decided this isn’t a crime any more, why are we still holding this against people, when the voters have decided it is not a serious offense?”

Under Washington’s legal marijuana law, adults over 21 can purchase up to an ounce of marijuana flower.

That same amount would have been enough to charge someone with misdemeanor possession before Initiative 502 passed in 2012.

Most of the misdemeanor marijuana convictions eligible to be vacated were handed down in county district courts or in municipal courts. People unsure of where they were charged and convicted usually can look up their sentencing court online using the search function at www.courts.wa.gov. A directory of courts in Washington state, organized by city and county, can be found here.

Upon arriving in person at the sentencing court, a person looking to vacate a judgment needs to file a formal motion — that’s the application Nguyen spoke of. This form should be available through the court clerk's office. A generic version is also available online.

A court hearing will then be scheduled. Yet there shouldn’t be much suspense involved. Under the new law, as long as a person was over 21 at the time of the original offense, the hearing’s outcome essentially will be predetermined. When the applicant appears before the judge, the court must grant the request to vacate the conviction.

The bill to make it easier to vacate past pot convictions didn’t receive universal support this year. A fair number of lawmakers — mostly Republicans — opposed it, as did the Washington Association of Sheriffs and Police Chiefs (WASPC).

Steve Strachan, WASPC’s executive director, said the group preferred the older system, in which judges had discretion when deciding whether to vacate a conviction.

“With this bill, there is no examination of the circumstances,” Strachan wrote in an email. “There may have been multiple offenses, or as is often the case, the misdemeanor may have been pled down from a felony.”

The group’s other objection to the bill was more philosophical. “It was illegal when the offenses occurred, and even though now it is legal, that does not change the act at the time it was committed,” Strachan wrote.

While there have been other efforts to help Washington residents clear their records of marijuana convictions, those initiatives affected fewer people than the new state law.

In January. Gov. Jay Inslee offered to pardon certain people convicted of misdemeanor marijuana offenses. But the governor’s offer extended only to those with a single conviction, leaving out those who may have multiple offenses on their record.

A pardon is also different than vacating a conviction: While a gubernatorial pardon removes the conviction from the criminal history records accessed by the public, the conviction remains in official court files. Unlike people whose records have been vacated, those who are pardoned do not have the legal ability to say they have never been convicted of a crime when applying for a job.

Inslee’s office said 26 eligible people have applied for pardons so far under his initiative; all of those requests have been granted.

Meanwhile, Seattle officials have already vacated misdemeanor possession convictions for 542 people prosecuted in the city’s municipal court. Those people represented everyone convicted of misdemeanor marijuana possession in the municipal court from 1996 to 2010, the year the city attorney stopped prosecuting the offense, a spokesman for City Attorney Pete Holmes said.

To vacate those convictions, Holmes and Seattle Mayor Jenny Durkan petitioned the court on behalf of the people convicted.

By contrast, under the new statewide law, people looking to clear their records need to petition the sentencing court themselves.

More information about vacating convictions can be found at the King County District Court's website (some of the listed conditions won't apply to vacating marijuana convictions under the new law). The necessary forms can be downloaded from the state courts website.