Megan Rapinoe should take a stand at the White House

And she should deliver her dissent to its chief occupant in person. 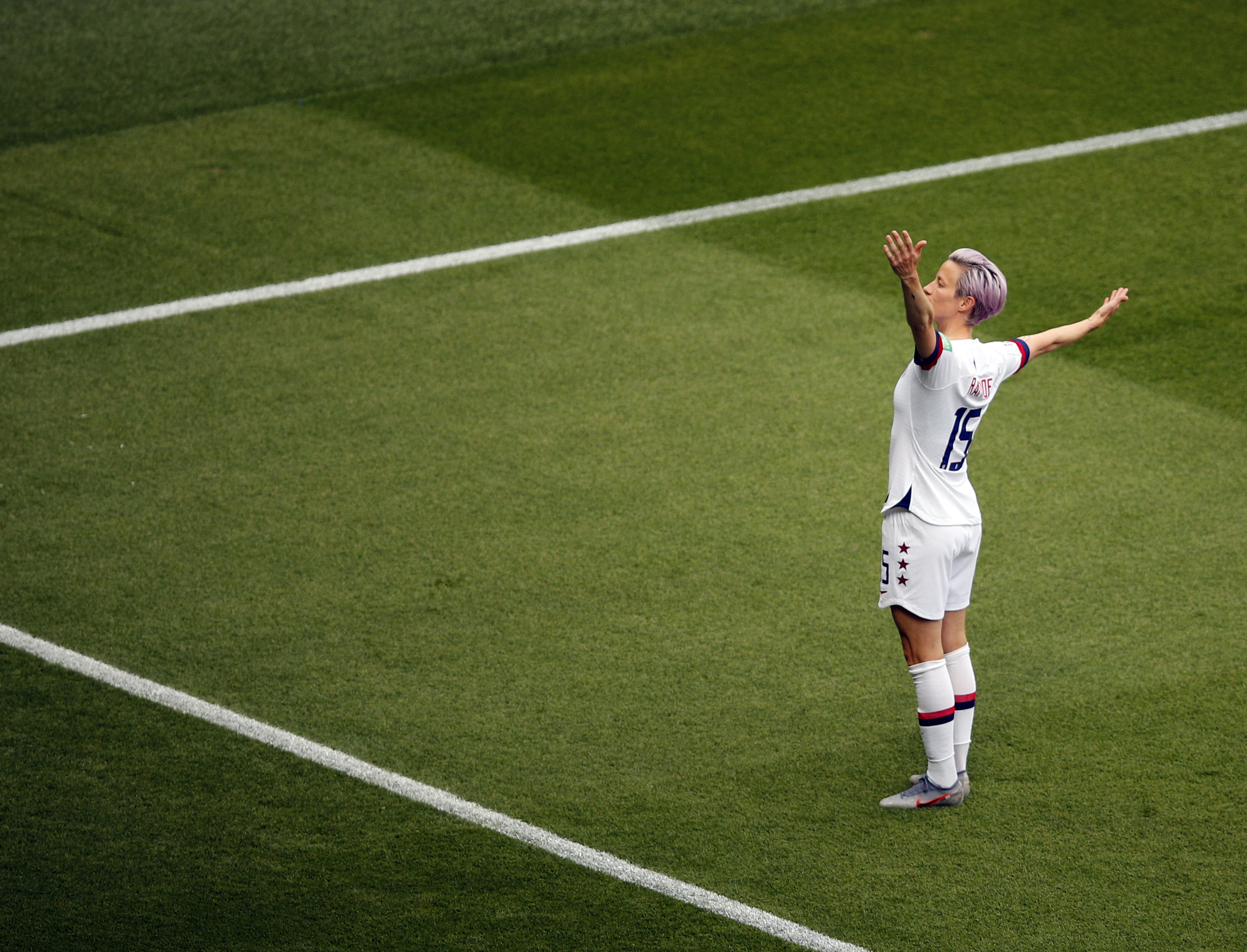 The United States' Megan Rapinoe celebrates after scoring her team's first goal during the Women's World Cup quarterfinal soccer match between France and the United States at the Parc des Princes, in Paris, June 28, 2019. (Photo by Francois Mori/AP)

I want Megan Rapinoe to strike a pose, the same one she assumed after scoring the first of her two goals during a 2-1 U.S. victory over France in the World Cup quarterfinals last week. The one with the satisfied look and arms dramatically spread. The one that’s part defiant, part self-congratulatory, and which launched a thousand memes on social media.

I want Megan Rapinoe to strike that pose with a miraculously recovered hamstring against the Netherlands or Sweden in the World Cup soccer championship on Sunday. Then I want her to strike that pose days or weeks later at the White House, that “(effing)” place she told Eight by Eight magazine she would not go. I want her to reconsider and strike that pose right in front of our misogynistic, homophobic and racist president, Donald Trump, who’s already invited her team to his temporary abode, “win or lose.”

I want Rapinoe to strike that pose for her teammates, who are suing their own soccer federation over gender discrimination. Their case includes the fact that they could earn about $1 million less apiece in bonuses than their male counterparts theoretically would if pigs flew and they actually won the Men’s World Cup. (This would be the women’s fourth title in eight tournaments; the men are zero for 21 and didn’t even qualify for the tournament in 2018). I want her to do it for #Pride, #MeToo, #TimesUp, #GoGirl, #BlackLivesMatter, #ImpeachTrump, and every other hashtag we can think up between now and then, including #StrikeAPose.

And I’d love for Rapinoe to strike that pose in the U.S. home white jersey, already the all-time, best-selling soccer jersey, women’s or men’s, over a single season at Nike.com.

Even after a week that included Sen. Kamala Harris’ unceremonious takedown of former Vice President Joe Biden over race in Round 2 of the Democratic presidential debate, “gay and fabulous” Megan Rapinoe has emerged with the best and timeliest opportunity to speak truth to straight, white male power. Why not go right into the lion’s den and do what the likes of even Nancy Pelosi has failed to do: Make Donald Trump not only squirm and fume, but burst like a Roman candle and melt away his last layer of Teflon.

Then we wouldn’t have to impeach him, just scrape him off the Rose Garden patio.

But this White House only is the “[effing] White House” because of its occupant. Let us not forget: It is our house, after all, not his. It was built by slaves and is defended by a military that reflects the racial diversity of our country and where plenty of women and LGBTQ folks serve honorably. Our taxes keep the lights on and put cheeseburgers on Donald Trump’s table. He’s just a tenant, primed for eviction.

I’m glad that Rapinoe and her teammates accepted an invitation from Rep. Alexandria Ocasio-Cortez to tour the House of Representatives. Maybe as inspiration to a new generation, the brown New York congresswoman can help stem a tide of whiteness in the U.S. women’s game, where elites can afford coaching and training in a skill-intensive sport in which tricks still can trump athleticism.

Still, it makes no sense that villainous despots like Kim Jung-un and Vladimir Putin would feel more welcomed in Washington, D.C. than Rapinoe. As an openly gay athlete since 2012 and the first prominent white or female athlete to join in the anthem protests, the U.S. team co-captain has been almost as subversive. She has taken up the revolutionary mantle passed from Michelle Akers to Julie Foudy to Abby Wambach, to build what a late colleague used to call the “themness” of female sports — not a cloned, lesser version of the male vision with an attached W and tinge of pinkness (read: SI for Women, WNBA), and not a disruption, but something that draws power from its own originality and independence.

I don’t think there are the same doubts about Rapinoe — ones that still cling to Sens. Harris and Elizabeth Warren — over whether she can handle Trump, face to face. She and her teammates play under a constant, withering and sometimes self-induced pressure, which they overcome with verve and an unexpected playfulness. This has been kind of a grumpy tournament for them, starting with the criticism over excessive celebration during a 13-0 thumping of Thailand. Give them, and me, a break. I covered the first World Cup championship played on American soil, in 1999, when Brandi Chastain ripped off her jersey and tore down the pretense that men hadn’t been stripping, cartwheeling and re-enacting with post-goal impunity for decades.

Rapinoe could bring things somewhat full circle for this region. A Shorecrest High School grad, Akers was the sport’s first Golden Boot winner for scoring the most goals in the inaugural 1991 tournament. Rapinoe is a revered member of Seattle’s Reign FC, a graduate of the University of Portland, and the partner of Sue Bird, the basketball player who is one of the most iconic Seattle-based athletes ever. Even though she missed Tuesday’s 2-1 semifinal win over England, Rapinoe remains a contender for the Golden Ball, awarded to the outstanding player of the World Cup, and could breathe some of Bird’s rarefied air if she brings it home.

I personally would rather see Megan Rapinoe strike a pose in front of Donald Trump, maybe with middle fingers also extended. The president deserves the gesture, and she deserves to be in the White House to deliver it.

An earlier version of this story misspelled Abby Wambach's name.