Five more Democrats from Washington joined the call over the weekend. What's prompted their change of heart? 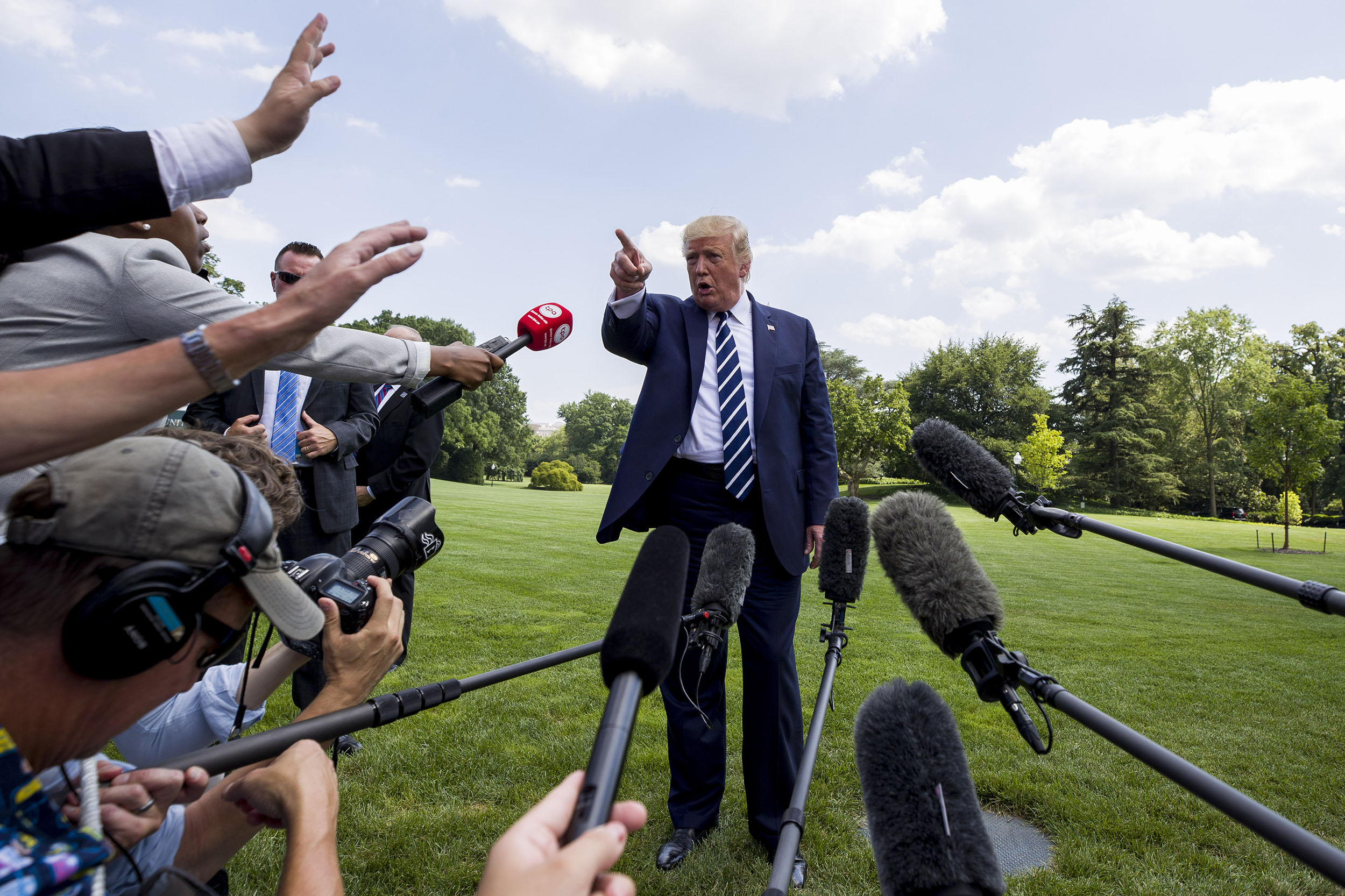 President Donald Trump speaks with reporters on the South Lawn of the White House before departing, July 19, 2019 in Washington. (AP Photo/Alex Brandon)

Two-thirds of Washington’s congressional delegation is now calling for an impeachment inquiry into President Donald Trump.

U.S. Sen. Patty Murray of Washington, the third-ranking Democrat in the Senate, similarly released a statement Sunday saying “the House should begin proceedings to determine whether the President’s actions necessitate impeachment.” A spokesman for Murray confirmed on Monday that the senator supports opening a formal impeachment inquiry.

In making their declarations, all five Washington members of Congress cited former special counsel Robert Mueller’s investigation into Russian interference in the 2016 presidential election as key to their thinking. Mueller testified about the findings of his report before two House committees last week, only days before members of Congress were set to return to their districts for a six-week summer recess.

In his testimony, Mueller reiterated that his investigation did not exonerate Trump, nor did it conclude definitively that the president did not commit the crime of obstruction of justice. Mueller has said, however, that Department of Justice policies do not allow the indictment of a sitting president.

“On the flight home, I was able to finish listening to the five hours of Robert Mueller’s testimony — hearing it all laid out so concisely reinforced how many lines of inquiry still need to be pursued,” Schrier said in her statement Sunday. “If I had done any one of the things our president has done to obstruct justice or act against the interest of this country, I would be in jail.”

Kilmer, meanwhile, said in his weekend statement that “the president’s open acceptance of support from Russians was undeniably disruptive to the integrity of our democracy.”

The announcements over the weekend mean that all of the Democratic House members in Washington state now support launching an impeachment inquiry. U.S. Reps. Pramila Jayapal of Seattle and Adam Smith of Bellevue previously had voiced their support, citing actions by Trump that they said amounted to obstruction and undermined Congress’ authority as a co-equal branch of government.

U.S. Rep. Rick Larsen of Everett, meanwhile, said earlier this month that he would support impeaching the president, but for different reasons, tweeting, “The president’s statements degrading the dream of citizenship led me to this decision.” Larsen issued his statement not long after Trump told four Democratic U.S. congresswomen of color to “go back” to their own countries, despite all four women being U.S. citizens who were either born in the United States or who have lived here for decades. Three were born in the United States and a fourth is a naturalized citizen.

As of Sunday, U.S. Sen. Maria Cantwell remained Washington’s only Democratic member of Congress who had not issued a statement supporting a formal impeachment inquiry. (On Monday afternoon, Cantwell came out with a statement saying, "I support any process the House deems necessary to get the information the public needs about obstruction of justice and Russian interference.")

According to a list kept by The New York Times, as of Sunday, 104 House members had come out in support of an impeachment inquiry.

Washington’s three Republican members of Congress — Jaime Herrera Beutler of Battle Ground, Dan Newhouse of Sunnyside and Cathy McMorris Rodgers of Spokane — were not among them.

In mid-July, prior to Mueller’s committee testimony, the three Republicans voted to table a resolution to impeach Trump. Yet so did most of the Democrats who control the chamber, including all four of the Washington House members who suddenly came out Sunday in favor of an impeachment inquiry.

So what shifted for those Democrats in the past two weeks? Todd Donovan, a professor of political science at Western Washington University, said Trump’s continuing attacks against members of Congress of color likely played a role. On Saturday, Trump laid into Rep. Elijah Cummings of Maryland, calling Cummings’ majority-Black district “a disgusting, rat and rodent infested mess” and saying, “no human being would want to live there.”

The president also called Cummings a “brutal bully” over the congressman’s criticism of the president’s border policy. Cummings’ district includes the city of Baltimore.

Donovan cited the president’s comments about Baltimore, as well as about the four Democratic congresswomen, as examples of racist statements that have made the president seem “less presidential.”

“Based on Trump’s behavior in the last couple weeks, with the over-the-top racist stuff, that may make it less controversial to take a stance on impeachment,” Donovan said. Mueller’s testimony last week was less likely to have changed many lawmakers’ minds, Donovan said, given that the former special counsel mostly reiterated what he had already made public in his previous report.

Margaret O’Mara, a University of Washington history professor who has written a book on presidential elections, said Washington’s members of Congress are doing what representatives often do: “responding to desires of their constituents to see more forceful and rapid action.”

That’s easier to do in places like Western Washington, where their districts are for the most part safely blue, she said in a text message Sunday.

“In swingier districts and in other parts of the country, the political sentiment is not as clear-cut,” O’Mara wrote.

Indeed, House Speaker Nancy Pelosi for some time has been cautious about launching impeachment proceedings.

After Mueller’s testimony last week, she said she wanted to obtain more documents and witness statements before moving forward, with an eye toward making the strongest case. Right now, Democrats are looking to enforce court subpoenas for additional documents and testimony as part of their own examination of the president’s conduct.

At the same time, there has been a lack of clarity among Democrats about what launching an “impeachment inquiry” truly means.

Neither the full House nor the House Judiciary Committee has taken a formal vote to signal impeachment proceedings are underway.

Yet on Friday, the House Judiciary Committee indicated in court filings that it is already “investigating whether to recommend articles of impeachment” against the president. The committee made that statement while asking a federal judge to unseal grand jury evidence collected by Mueller during his investigation, according to The New York Times.

Additionally, four members of the House Judiciary committee — including Jayapal — co-authored a Friday article in The Atlantic headlined, “Why we’re moving forward with impeachment.”

Several of Washington’s Democratic members of Congress who declared their support on Sunday for an impeachment inquiry did not respond to emailed inquiries about what, precisely, they thought an inquiry should entail.

Heck, for his part, suggested Sunday he did not think a formal inquiry was currently underway, but should be.

In his prepared statement, Heck wrote, “I support initiation of an impeachment inquiry by the House Judiciary Committee and will support measures to accomplish this when Congress returns to Washington, D.C.”

Heck added that he thinks the House should initiate an impeachment inquiry without concern for whether the Republican-led Senate will ultimately return a conviction against the president.

“I am familiar with the political arguments against initiating an impeachment inquiry based on the findings to date,” Heck’s statement said. “For example, some suggest that the Senate is highly unlikely to convict the President should the House impeach him and that his chances of reelection will therefore be enhanced.

"That may be true," Heck continued. "What is truer is that nothing less than the rule of law is at stake.”

This story has been updated to reflect additional comments from Sen. Patty Murray's office, which were received after the original article was published, as well as a statement released by Sen. Maria Cantwell.