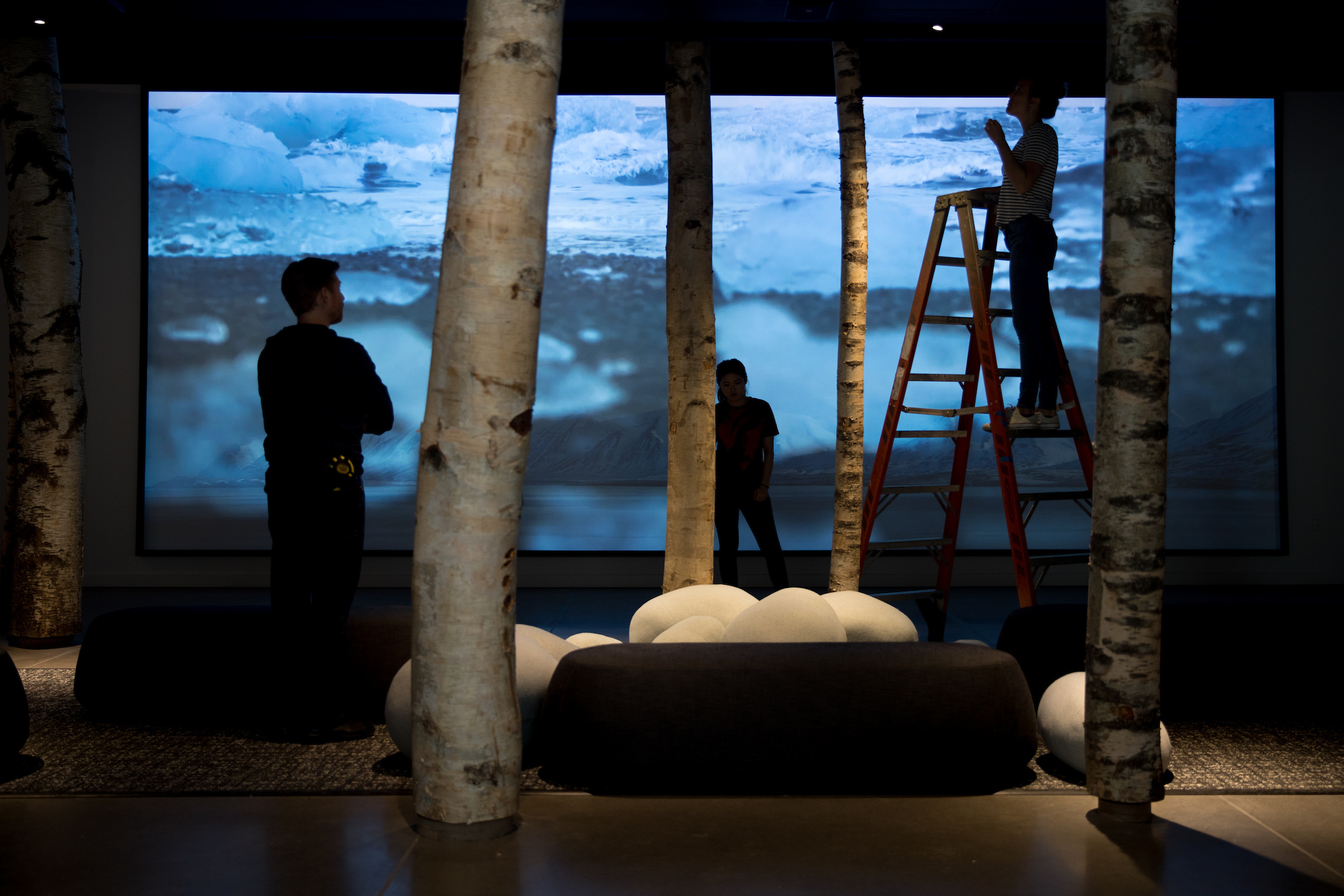 Workers put the finishing touches on the Sense of Place gallery at the Nordic Heritage Museum in Seattle's Ballard neighborhood, April 27, 2018. Last March, it was redesignated as the National Nordic Museum. (Photo by Matt M. McKnight/Crosscut)

Earlier this year, President Donald Trump signed a bill with a provision that officially designated the former Nordic Heritage Museum in Ballard as the National Nordic Museum.

This seems sensible from a couple of angles. One, Trump would love to see more Norwegian immigration in America — they are the kind of foreigners he likes and few would describe Norway as a “shithole” country.

Second, if anywhere in the United States is fit to host a top quality National Nordic Museum, it is booming Ballard, largely built by Nordic immigrants. Though it now features more non-Nordic microbreweries than lutefisk merchants, its maritime industry and statue of Viking explorer Leif Erikson at Shilshole help keep its Scandinavian spirit alive.

Trump might not be so happy, however, to know that the new museum — just over a year old and a sleek, modern tribute to Scandinavian design — is, in fact, a mission, not so unlike the outposts of folks like Marcus and Narcissa Whitman, who long ago came to the Oregon Territory to convert the heathens. The Nordic’s mission is a secular one, however, and its faith is social democratic politics and values.

We usually think of this country as sending missionaries abroad, or that we are the exporters of democracy. But the Nordic countries — Norway, Sweden, Denmark, Finland and Iceland — see Seattle as part of a not fully enlightened United States. In other words: Seattle is fertile territory for further seeding the ideas and ideals of social democracy in our liberal soil. Republicans decry socialism at every turn these days (as they have for ages), and liberal Seattle itself debates the pluses and minuses of socialism vs. Democratic politics. Such fights are deep in our civic DNA and go back at least to the General Strike of 1919, when Seattle socialism scared the bejesus out of America and the city’s business community.

The National Nordic Museum has as part of its purpose setting the record straight that a social democracy — as many Nordic and European countries are — is not red-flag Kshama Sawant socialism and is the best path forward. Bernie Sanders, for example, has long been an admirer of the Nordic style of governing.

I visited the museum when it was under construction two years ago and met with a bevy of Nordic diplomats who were touring the country to tout a book called Nordic Ways, a kind of how-to for their style of democracy. Some expressed worry about the direction of the Trump administration and saw this book and the new museum as a way to reach the American people via their immigrant roots and telling the story of how advanced the old countries have become since great-grandma came over on a boat in the 1890s.

The desire to exhibit Nordic values in the museum preceded Trump. As far back as a decade ago, plans included the intention to create a facility that “resonates with Scandinavian values.…” The idea is that those values shaped Seattle’s own values and, in turn, contemporary Scandinavia has learned a few things and still has something to teach us.

On a recent visit I was thrilled to see how the architecture of the building — designed to mimic the drama of a fjord with high walls — was an original and gorgeous showcase for Nordic culture and history, including its influences of the Pacific Northwest. A digital image wall shows spectacular drone-photographed natural scenery, almost absent of people despite Scandinavia’s reputation for enlightened city planning. You’re more likely to see forests and icebergs than images of, say, bustling Copenhagen.

Exhibits take you from the cultures that flourished in Europe’s far north following the retreat of the Ice Age glaciers, and tour you through the U.S. Nordic immigrant experience and its impact on Seattle, from the timber and fishing industries to the Nordstrom retail empire.

Visitors can soak up the history following a timeline laced with art and artifacts, like rune stones, Viking swords and sculptures of Odin. As visitors approach the modern end of the timeline, politics begin to come to the fore. We see social democratic moments in Nordic history. We’re introduced to a 1936 book by American Pulitzer Prize-winning journalist Marquis Childs called Sweden: The Middle Way, a bestseller in its time that influenced Franklin D. Roosevelt. Roosevelt said of the book, “In Sweden, for example, you have a royal family and a socialist government and a capitalist system, all working happily side by side.” Sounds a bit like the New Deal/Progressive era, with the Roosevelts subbing for royalty.

That sketch of the Middle Way puts social democracy in a basic nutshell for today: a welfare state with gender equity, great health care, high taxes, lower inequality, the glue of tradition, and robust entrepreneurial capitalism. Social democracy is not as “socialist” as both liberal Democrats and right-wing Republicans might like you to think.

Museum visitors eventually come to a gallery called “Nordic Perspectives.” A quotation on the wall by Eygló Harðardóttir, a fortysomething Icelandic politician (she served as minister of social affairs and housing from 2013-17), says, in part, “We appear to have answers to some of the questions the world is asking itself right now — how to build an open society capable of progress and coping with crises.”

On a wall, the values of Nordic Perspectives are listed, including Openness, Social Justice, Connection to Nature and Innovation. These could be inscribed inside the Seattle City Council chambers. People are encouraged to fill out cards asking questions like, “From my perspective Social Justice means…” and “What do you do to respect and improve the lives of others?”

While the messages might go down well in Blue Seattle, the frankness of the evangelism is pretty unusual in a museum setting. Indeed, it reminded me less of a museum than a kind of elaborate international expo pavilion, which the Nordic countries do extremely well. I’ve seen exhibits with stunning wraparound Icelandic digital journeys, fake Finland birch forests, the original Little Mermaid, and I can still remember tasting the best Swedish meatball at the 2000 World’s Fair in Hanover, Germany. Nordic pavilions often feel like multimillion-dollar travel bureaus. With great design, visuals and social conscience, often with amazing artifacts thrown in, these countries routinely shine as they make their case as the little countries that could. They are looking for common ground, but in this case it feels to a purpose: to gently guide Americans to the Nordic way.

The National Nordic Museum is about heritage, but it also offers soft evangelism. The museum’s Nordic sponsors surely hope to make — and encourage — American converts. With Trump’s signature, they well might.