After years of process, the city council loosened regulations to build accessory dwelling units and tightened them on McMansions. 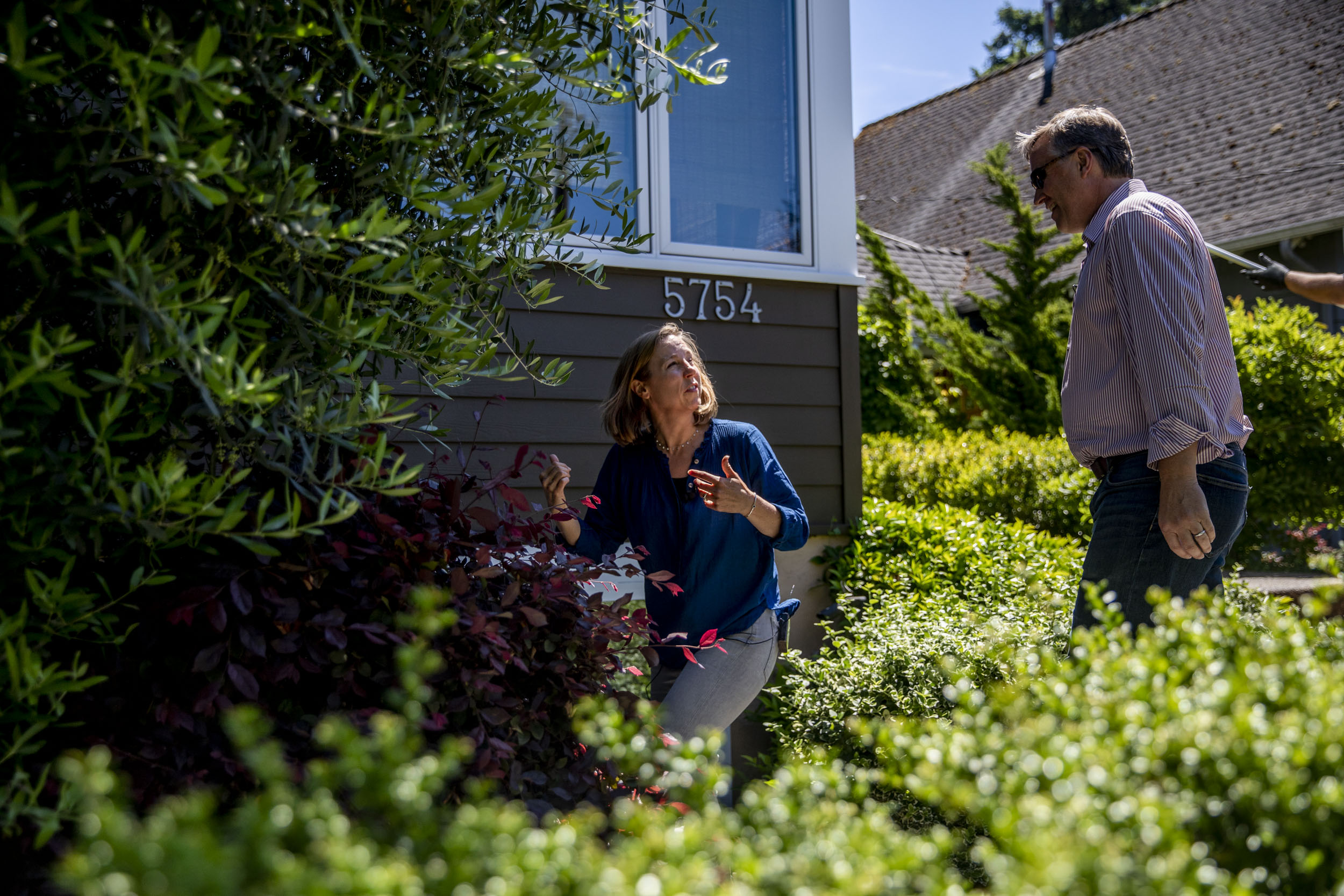 Sarah Swanberg shows Seattle City Councilmember Mike O'Brien the ADU, accessory dwelling unit, in the basement of her Seattle home during a press tour on June 11, 2019. (Photo by Dorothy Edwards/Crosscut)

The legislation also limits the maximum size of new single-family home construction to reduce developers’ appetite for tearing down smaller homes and building a much larger and more expensive replacements.

Monday’s vote came after more than an hour of public comment, split evenly for and against. Proponents of the council’s ADU legislation see it as a modest, but essential step toward increasing density in Seattle’s single-family zones, helping to alleviate the city’s housing crisis. Opponents have fought the legislation for years, arguing that the added cottages and basement apartments threaten to reshape the single-family neighborhoods that so many hold dear.

“I’m excited for this moment to finally come,” Councilmember Mike O’Brien, the legislation's lead sponsor, told Crosscut before the vote Monday. “There are hundreds, if not thousands, of people anxiously awaiting for this to pass so they can move forward with their cottage plans.”

Between 2010 and 2018, Seattle added more than 130,000 residents. In that same period, the city gained 48,052 new housing units. The vast majority was built in the limited areas of the city where multifamily housing is legal. Just 5% of the new housing went in single-family zones, which make up three-quarters of Seattle’s residential areas. Some single-family zones have actually lost population amidst the city’s boom.

ADUs have been legal since 1994; DADUs were legalized in 2009. But cost, permitting, financing and other issues have kept Seattle’s ADU/DADU construction rather anemic. From 1995 to 2016, only 682 ADUs were built. From 2009 to 2017, 292 backyard cottages were built. City officials predict that if the old regulations were left in place, the city would gain 1,970 new cottages and basement apartments over the next decade. With the regulations, they expect that number to jump to 4,430 over that same period, meaning about 3% of Seattle’s roughly 144,000 single-family homes would build ADUs.

“This is not a silver bullet that’s going to solve the housing affordability crisis on its own,” said Matt Hutchins, a member of the pro-ADU advocacy group MOAR and an architect whose firm designs backyard cottages. “But it is another potential option and that’s what we need. … We haven’t had a lot of housing choices in the last 20 years. It’s either big apartments or unaffordable single-family houses.”

The new, looser regulations, among other things, allow a homeowner to build both a basement apartment and backyard cottage on the same lot, rather than one or the other; removes the requirement that each unit have an off-street parking spot; reduces the minimum lot size from 4,000 square feet to 3,200; allows backyard cottages up to 1.000 square feet and a few feet taller than previously allowed; and eliminates the requirement that the property owner live on site.

Altogether, the regulations are supposed to reduce the cost of construction, provide more design flexibility and make it easier for someone to rent out the property. The legislation doesn’t explicitly make ADUs and DADUs any cheaper to build. Right now, a basement apartment typically costs between $100,000 and $150,000, while backyard cottages are often north of $300,000. But Hutchins said the changes will help bring down the cost some. He explained, for example, that “adding those extra feet of height makes it easier to do more standard construction with Seattle’s sloped lots.”

Eliminating the parking requirement will also result in modest cost savings. Hutchins said even a basic gravel parking space for a backyard cottage can cost $5,000 to $10,000 to build.

Because a majority of homeowners in Seattle are white, the city’s analysis of the ADU legislation found that it will disproportionately benefit Seattle’s white homeowners.

But white homeowners are not the only ones excited about the passage of today’s reforms. Ruby Holland is the founder of Keep Your Habitat, a project aimed at helping older African American homeowners in the Central District stay in their homes. For many CD residents like Holland, rising property taxes are straining tight fixed incomes. She sees basement units and backyard cottages as one way homeowners can use their property to generate extra income or create space for multigenerational living. Holland, for example, hopes to someday build a backyard cottage that she can move in to so that her son and grandson can move into the main home.

To help low-income homeowners interested in building an ADU, the city Office of Housing is launching a pilot project to provide low-interest loans for ADU construction. The pilot’s funding is modest — enough to build six to 12 basement apartments

City officials have been exploring ways to increase ADU and DADU production for five years. The Department of Planning Development studied the issue in 2014 and, in 2015, loosening ADU regulations was one of the 65 policy recommendations made in former Mayor Ed Murray’s Housing Affordability and Livability Agenda.

In December 2015, O’Brien introduced the first version of his ADU legislation. The following summer, the Queen Anne Community Council filed a legal challenge with the city hearing examiner, arguing that the city had not sufficiently analyzed the impacts of its proposal.  Six months later, the hearing examiner agreed. The city spent almost two years producing its final impact statement.

In October 2018, the Queen Anne Community Council again appealed the city’s impact statement on the grounds that it did not sufficiently consider the “unique qualities” of the city’s neighborhoods, among other issues. In May 2019, the hearing examiner ruled in favor of the city, clearing the path for the final legislation to move forward.

Opponents have raised a number of issues about the legislation over the years. There are fears that the lack of a parking requirement will create headaches for existing homeowners. There also are concerns that backyard cottages will look out of place among the city’s traditional single-family housing stock.

Queen Anne Community Council member Marty Kaplan told Crosscut that owner occupancy is one of the biggest concerns. He and others worry that without requiring the owner to live on the property, speculative investors will want to buy up single-family homes, build a basement unit and backyard cottage, then rent it all out, creating a de facto triplex. Kaplan points to a recent Wall Street Journal report on a nationwide trend of investors purchasing single-family homes, which rose to a record 11% of all U.S. home purchases in 2018.

“If you take away owner occupancy and allow people to build multiple residences on one piece of property, anyone with any kind of investment nerve, they’re going to invest and buy single-family homes,” said Kaplan.

But, according to the WSJ, investors typically buy houses at the low-end of the market, where they can make all-cash purchases. Detroit, Philadelphia and Memphis are the leading markets for out-of-state investor home purchases.

O’Brien said the city’s analysis showed that it is unlikely people will turn to ADUs and DADUs as investment vehicles.

In an effort to limit incentives for would-be speculators, Councilmember Lisa Herbold introduced an amendment that would require a homeowner to own their home for one year before being allowed to build a second ADU or DADU.

Her colleagues voted the amendment down 7-1 on the grounds that their data doesn’t bear out the fears of speculation and that there are cost savings for homeowners who build two ADUs at the same time.

Ultimately, Kaplan said, opponents of O’Brien’s ADU legislation are worried that the increased density will change their neighborhoods for the worse.

O’Brien worries that there is a class-based fear of renters motivating much of the opposition.

“There’s sense from some that people wealthy enough to own single-family homes in Seattle are much more trustworthy neighbors than those renting them and it disturbs me a bit,” he explained. “We don’t require an owner on site in apartment buildings or even rental single-family homes, so why should an owner need to be nearby in a backyard cottage or basement unit?”

“I don’t believe there is such a thing as too much housing in a city that is growing as quickly as Seattle,” she said. “We need more housing and we need more housing choice. As a policy maker, I will not leave any tool off the table that will bring more housing units to our city.”