In developing its ‘community preference’ policy, the city is attempting to strike a tricky balance between social justice and federal anti-discrimination law. 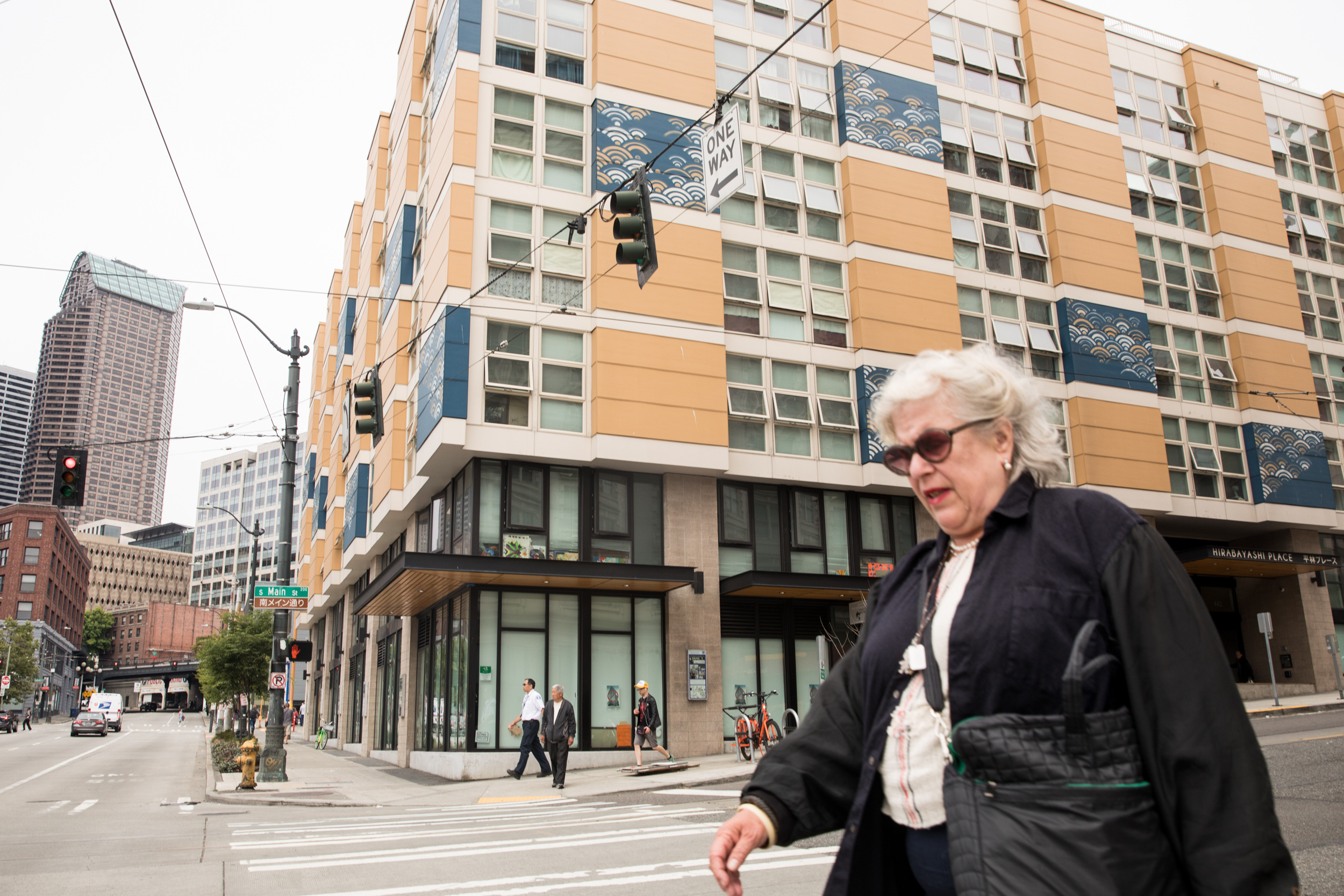 Hirabayashi Place, seen at the corner of Fourth Avenue and Main Street in Seattle's Chinatown-International District. A version of community preference policy was used to open this building in 2016. (Photo by Matt M. McKnight/Crosscut)

When the InterIm Community Development Association built the Hirabayashi Place affordable housing development in the Chinatown-International District in 2016, its directors wanted to ensure the 96 new apartments would actually serve the people the nonprofit serves: Asian, Pacific Islander and refugee communities in the district.

“We’ve been developing housing for a long time,” said Leslie Morishita, InterIm’s real estate development director. “Every time we open a project, we struggle with devising a lease-up process that will reach underserved community members, while at the same time complying with fair housing laws.”

Seattle’s boom has pushed communities of color out of the city. The most often cited example is in the Central District, once a majority Black neighborhood that is now less than 18 percent African American. In the Chinatown-International District, low-income elders are being priced out as new private development replaces older, more affordable housing. InterIm wanted Hirabayashi Place to make a direct impact on displacement from the district, yet Seattle lacked an anti-displacement tool that could help them do that. The group forged ahead by creating its own: a community preference policy.

Used by New York, San Francisco, Portland and other city governments, preference policies give some applicants a better chance of landing a spot in a new affordable housing development, usually based on whether they live or work in the development's neighborhood. Typically, developers set aside a portion of the new units for a second lottery involving people who qualify for community preference.

Preference policies are controversial. Detractors say they entrench segregation by keeping poor people in poorer neighborhoods. Supporters say they give people a better chance to stay in their community as new investment comes in and the cost of living rises. People on both sides of the issue worry about how the policy intersects with federal fair housing law, which is meant to prevent discrimination.

With Hirabayashi Place, InterIm wanted to open applications only to people working and living in the Chinatown-International District, but fair housing lawyers and Seattle’s Office of Civil Rights said that was too narrow a pool and would likely violate federal fair housing law. So instead, the organization opened up applications to any low-income resident living in one of the city’s neighborhoods at high risk of displacement.

“It was a pretty simple thing to implement,” said Morishita. “It didn’t take a lot of money, just a little extra effort.”

As is always the case with new affordable housing developments, Hirabayashi Place had far more applications than available units. InterIm applied the preference policy to the whole building, rather than just a percentage of units. Morishita said the plan made the city nervous and that InterIm was told by officials that if it was sued for violating fair housing law, it would be on its own.

To date, InterIm hasn’t had any trouble with federal authorities, but its experience inspired the nonprofit to lobby the city to create an official community preference policy that would strengthen the case for its use in Seattle and give other affordable housing developers a chance to follow suit.

“I think it’s a small impact in the big picture, but given all that’s happening in Seattle, we need to do everything we can,” said Morishita. “Ideally it would be mandatory if you are funded by the Office of Housing and building in a neighborhood identified as having high displacement. But at the very least, the city should not prevent community-based groups from doing it.”

On June 24, the Seattle City Council authorized the creation of just such a policy. Now Seattle’s Office of Housing is creating guidelines for developers who choose to use a preference policy when they lease new affordable housing projects. The details are not yet finalized, but it will follow a few key principles.

“Done well, these policies can be an additional tool towards ensuring that the people who make our city work and keep it strong and diverse are able to live in our city,” said Seattle City Councilmember Lisa Herbold, who helped lead the council’s push to create Seattle’s version of a preference policy.

The policy will be an option — not a requirement — for affordable housing developers using city funding to build subsidized housing in neighborhoods the city has identified as having high displacement risk for low-income communities and communities of color. They include Othello, South Park, Rainier Beach, Columbia City, Beacon Hill, Bitter Lake, Chinatown-International District and others. The preference policy will apply to a portion of the units in an affected building, not every unit, and who gets to live there will be decided by a lottery run by the building management company. The Office of Housing is considering allowing former residents of high displacement-risk neighborhoods to apply along with current residents.

Though use of the community preference policy will be optional, Emily Alvarado, interim deputy director of the Office of Housing, said, “We know of many affordable housing developers who are interested in pursuing this strategy, and we’re committed to working with them to get those policies in place.”

One of the biggest considerations in implementing the policy is how to keep it race-neutral while still accomplishing the goal of keeping low-income communities of color from being pushed out of Seattle. Federal fair housing law exists to prevent housing providers from discriminating against protected classes based on race, disability, ethnicity, family status and more. Some experts argue that because they give some people privileged access to housing over others, preference policies have the potential to discriminate against protected classes. New York has faced several lawsuits against its preference policy, alleging that it entrenches neighborhood segregation. San Francisco’s policy led to heavy scrutiny from the U.S. Department of Housing and Urban Development and an inability to use federal funding for developments with preference policies.

Because of the long history of neighborhood segregation in Seattle and the link between race and wealth, geography and income can act as something of a proxy for a race-based policy.

“Racial equity is a values driver for this policy,” explained Alvarado. “And yet the way in which it will be designed and implemented will be race neutral. Because of the displacement from formerly redlined communities … high-risk-of-displacement neighborhoods tend to be the most inclusive in the city. The demographics show they are very integrated.”

As it crafts is preference policy, officials with the Office of Housing are looking to New York, San Francisco and Portland as examples.

New York’s preference policy, implemented in the 1980s, is mandatory and applies to all affordable housing developments that receive city funding. It requires that during the initial lease-up that 50 percent of the units in a building be set aside for a special lottery for residents of the neighborhood.

Portland’s preference policy was created as part of the North/Northeast Neighborhood Housing Plan in 2015 and is meant to keep residents in, or bring them back to, the city’s historically Black neighborhoods. It applies to all city-funded projects in the north and northeast sections of the city, requires 40 percent of units to be set aside for the preference pool and gives top priority to current and former neighborhood residents. Priority is also given to households who owned property that was taken by the government during urban renewal — the mid-20th century, federally funded “slum clearance” effort that gave city’s funding and authority to demolish large swaths of homes, often in poor communities of color. In Portland it was used to evict thousands of African Americans from their homes.

San Francisco’s policy gives preferential access to residents living in the same city supervisor district as a city-funded affordable housing development and affordable units built by private developers as part of the city’s incentive zoning program. The mandatory policy sets aside 40 percent of units during the initial lease-up.

According to the San Francisco Mayor’s Office of Housing and Community Development, the neighborhood preference was applied to 216 units across 28 developments from July 1, 2016, through June 30, 2018. For those 216 units, the housing and community development office received 8,726 applications.

Among San Francisco housing advocates, the program is generally seen as a positive, albeit modest, effort.

“For people facing instability in their neighborhood, it provides a pathway to stay,” said Fernando Martí, co-director of the San Francisco Council of Community Housing Organizations.

But, pointing to the massive gulf between applications and available units, Martí said the policy’s success has been limited. “The question isn’t necessarily about whether the program is doing what it’s intended to do. It’s ‘Are the units available?’ This data points to how much need there is within a district.”

San Francisco advocates agree that one benefit of the preference policy is its value as a political tool.

“Affordable housing in San Francisco is hard to get approved and accepted,” said Todd David, executive director of the San Francisco Housing Action Coalition. “The neighborhood preference makes it so much easier. People think, ‘Yay, people in my neighborhood get to live in this housing.’ From a pure marketing point of view I think it’s phenomenal.”

The city hit a snag when applying the policy to a low-income senior affordable housing development in the predominantly African American Western Addition neighborhood. The development was funded in part by HUD, requiring the city to run its plan by federal officials, who ultimately rejected it on the grounds that it could “limit equal access to housing and perpetuate segregation.”

“A neighborhood that is disproportionately minority for one group, is not disproportionately minority for every minority group, so neighborhood preference can be discriminatory. … That’s the quandary of using this type of tool that’s historically been used to keep minorities out,” said Kathy O'Regan, faculty director at New York University’s Furman Center, which focuses on housing policy research. O’Regan worked at HUD under President Barack Obama.

Eventually, HUD and the city agreed that for projects with federal funding, the city must open the preference lottery to anyone living in neighborhoods identified has having “extreme displacement pressure.”

Seattle’s Office of Housing expects to have its community preference policy guidelines in place by the end of 2019 and is ready to work now with affordable housing developers interested in applying a policy to their projects.

InterIm will, of course, be using community preference for its next project, Uncle Bob’s Place, a 126-unit affordable housing development slated to open in 2021.