New WA laws aim to get guns away from domestic abusers

Two bills taking effect this weekend will make it easier to keep guns away from people suspected of domestic violence. 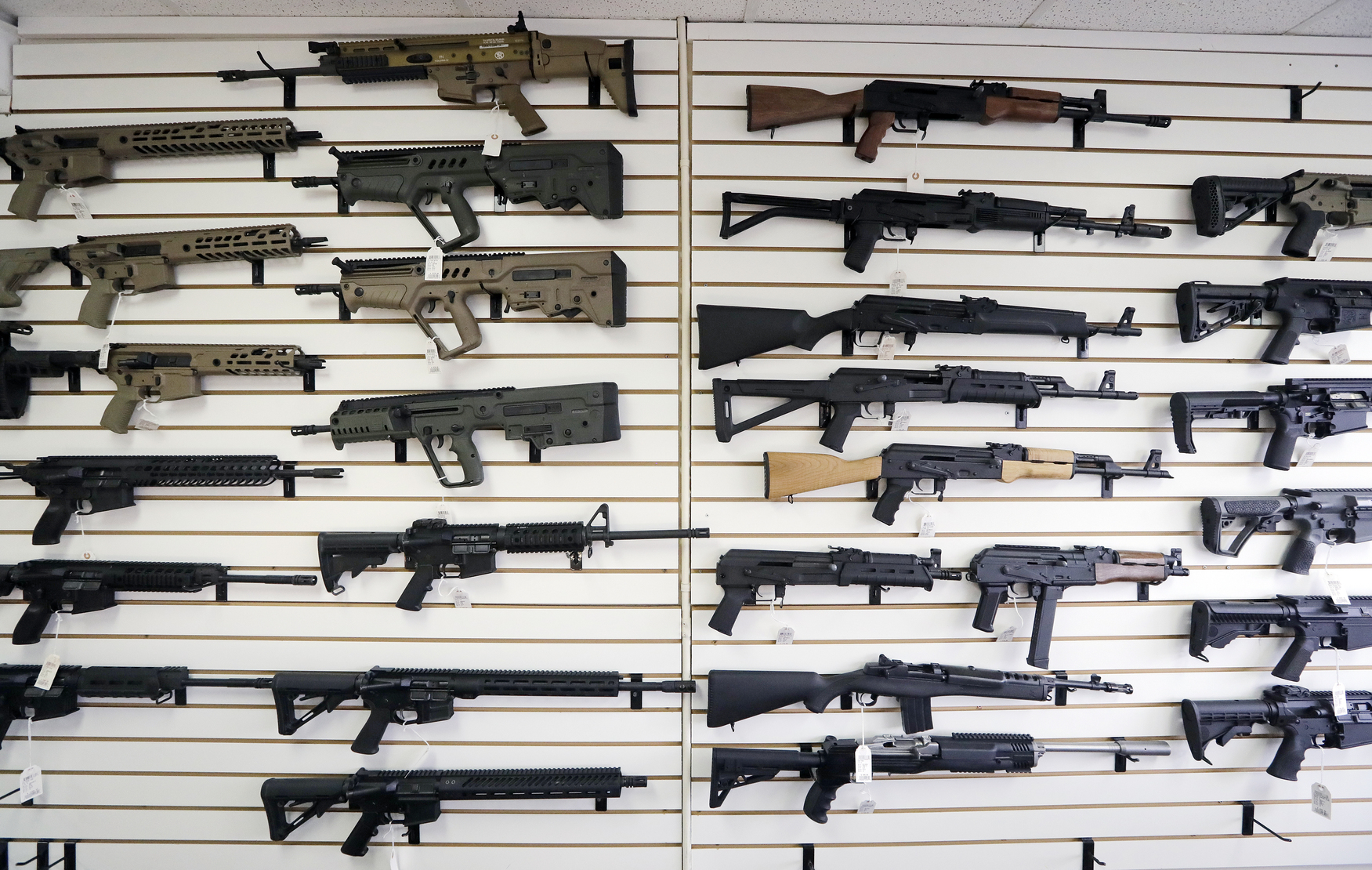 In this Oct. 2, 2018, semiautomatic rifles fill a wall at a gun shop in Lynnwood. (Photo by Elaine Thompson/AP)

Soon it will be more difficult for people suspected of domestic abuse to possess firearms in Washington state — a change in law that supporters say will help save lives.

Two new laws taking effect this weekend deal with the surrender and seizure of firearms in domestic violence or harassment situations.

One measure adds requirements for police to seize guns when responding to domestic violence calls. Another aims to make sure that, when a judge issues a protection order telling someone to turn over their firearms, the required surrender of firearms actually happens.

The Legislature approved both bills this year as part of an effort to shore up gaps in existing gun safety laws, said state Rep. Laurie Jinkins, D-Tacoma, who sponsored both pieces of legislation.

“There’s this overwhelming evidence that when a victim leaves a domestic violence situation, the next few months after that are the most dangerous time in their life to be killed — and killed by a firearm,” said Jinkins, who chairs the House Judiciary Committee. She said her goal is to help remove some of the guns that can contribute to that grim statistic.

Both of the new laws take effect Sunday.

Under House Bill 1225, police officers who respond to a domestic violence incident will be required to seize firearms and ammunition they believe were used, or that were threatened to be used, in the offense. Officers also must seize firearms that are in plain sight or discovered in the course of a lawful search.

In addition, police officers must ask to remove all firearms to which the abuser has access, at least until a court hearing can be held.

In a change from past law, police also will be required to ask victims about the presence of guns in the home, as well as whether a suspected abuser has access to guns elsewhere. That information, combined with additional questions about an alleged abuser’s past behavior with guns, can be used to inform a judge’s subsequent decision on whether to issue a protection order, Jinkins said.

“The sooner there can be intervention to remove a weapon from a dangerous situation, the more that can increase safety,” Johnson said.

Yet critics have raised concerns about mandating the seizure of firearms that aren’t clearly tied to a criminal offense, including those mounted in decorative displays or stored elsewhere in a home.

State Rep. Morgan Irwin, R-Enumclaw, said he voted against the legislation because he thinks it raises constitutional concerns about when it is appropriate for police to seize property.

“There are so many potential situations for this law to be used in the wrong way,” said Irwin, a Seattle police officer who serves as the ranking Republican on the House Judiciary Committee. “We don’t get to seize personal property that has no nexus to a crime in this state, because that’s not constitutional.”

The Washington Association of Sheriffs and Police Chiefs also had some issues with the bill, said Steve Strachan, the group’s executive director. Those included “unintended consequences” about taking firearms away from a victim who might want to keep a gun for protection, as well as confusion about what guns need to be seized if an incident occurs at someone else’s house or at a store, he wrote in an email.

In the past, however, there have been few mechanisms in place to make sure that someone actually turns over their guns after those types of orders are issued, Strachan said.

The new law will change that. Under the previous law, respondents were ordered to surrender their firearms and were required to show proof they had done so within five days.

That didn’t always result in compliance. According to King County’s Regional Domestic Violence Enforcement Unit, 875 people were ordered to surrender their firearms as part of domestic violence protection orders in King County Superior Court in 2016. However, 56% of those respondents ignored the orders.

Now, under the updated statute, people are required to surrender their firearms immediately when a police officer comes to notify them of the order against them.

In cases where officers can’t verify compliance, courts are required to check back in and hold review hearings to ensure judges’ surrender orders are being followed.

Prosecutors will also gain broader authority to charge people with the felony of unlawful possession of a firearm if they keep guns in violation of a court order. Previously, that option wasn’t available for many orders, including stalking and sexual assault protection orders where the case didn’t involve an intimate partner relationship, said Michelle Larson, a King County deputy prosecuting attorney.

Irwin, the Republican from Enumclaw, said he has constitutional concerns about HB 1786 as well. He said he worries that in some situations, it could infringe on people's due process rights.

Two other bills deal with restricting people’s ability to own firearms when they are detained for mental health reasons or when they are deemed mentally incompetent to stand trial.

Another new law imposes restrictions on undetectable or untraceable guns, such as those made with 3D printers. The limits on so-called “ghost guns” took effect July 1.