Order up: Food trucks have multiplied in Seattle — and with that come growing pains 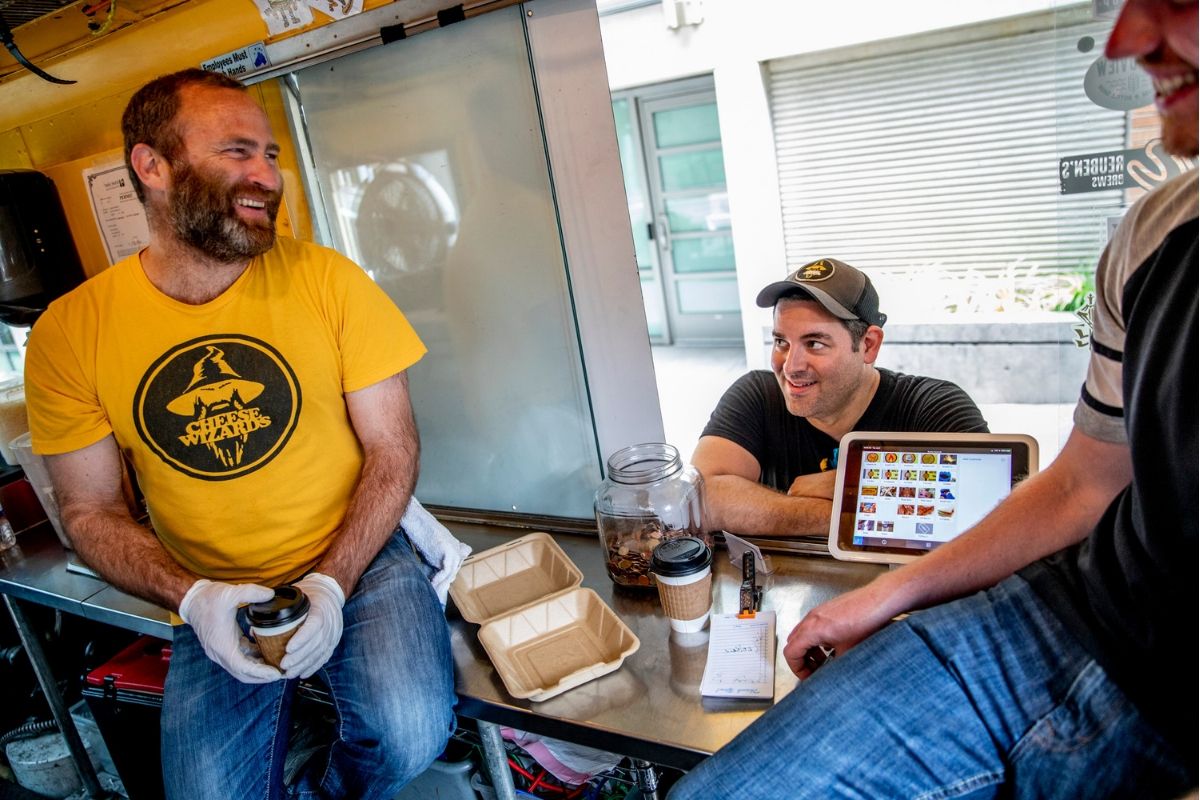 Cheese Wizards food truck workers, from left, Jared McSharry, owner Bo Saxbe and Chris Rosmith laugh together while getting ready for the lunch rush in downtown Seattle on July 9, 2019. (Photo by Dorothy Edwards/Crosscut)

On any day, especially a sunny one, in Seattle’s South Lake Union, there are crowds of blue-badge wearing patrons gathered and lined up around food trucks outside Amazon’s headquarters. You can also find food trucks at any of the dozen seasonal neighborhood street markets, block parties and festivals.

Like Amazon’s boom, food trucks are part of daily life for many in Seattle. But their existence, some say, has always been weighed down by bureaucracy and regulations. It’s not easy to run a food truck business, proprietors acknowledge.

In 2018, the King County Department of Health issued 60 mobile food unit permits to first-time applicants, according to data provided by the department. The county says there are now approximately 400 food trucks operating in King County.

Jonathan Amato, who runs Curbside Provisions, a company that manages food trucks in Seattle, suspects more trucks close than open each year. He estimates many don’t make it past four years because it's so challenging to operate and to stay afloat in the business.

“These aren’t like corporate companies coming in and opening up these food trucks; these are just small business owners who [think] this is a good way for them to get from point A to point B,” Amato said.

And the market is increasingly saturated.

Cheese Wizards, a gourmet grilled cheese sandwich shop on wheels, has been in business since 2012, which is “pretty long in food truck years,” said co-owner Bo Saxbe. He opened his business right around the time food trucks were pushing for a more robust community of food trucks in Seattle and right before they became widely accepted.

Saxbe operates Cheese Wizards with his brother, Tom. He said Seattle’s food truck scene is “a difficult scene to navigate. Finding places to park can be difficult, especially with more and more food trucks.”

A recent study by the U.S. Chamber of Commerce Foundation listed Seattle as one of the top five most difficult places for food truck operators because it has a large number of strict standards.  In Seattle, according to the study,  business owners have to navigate 29 procedures to obtain the licenses and permits required to legally operate a food truck. Those include getting a county and city business license, a business plan review with the county, a commissary agreement, a bathroom agreement, a mobile food unit permit that requires an additional seven additional steps and a fire permit.

In Portland, the study notes, the number of procedures is seven.

In Seattle, the process gets even trickier when it comes to vending locations. Depending on where a truck parks in the city, different entities are in charge of permitting. If the vending area is a public right of way, then the food truck needs a permit from the Seattle Department of Transportation. If it's on Parks Department or private property, that requires a different permit.

And all these licenses and permits cost money. The study put Seattle’s total average cost of permitting and licensing fees at $6,211. Vendors also need the right permit for the right amount of time for the right location. So having multiple permits for just one day isn’t uncommon.

“There’s oftentimes a waiting list to get into spots,” Saxbe said about nabbing a desired location. “It’s a bit of a waiting game — eight to nine even 10 months after you’ve submitted the permit [application].”

“I’m generally pro-food truck because it’s fun,” he said of newcomers hoping to make it in the business, “[But] be ready to be exhausted.”

But their popularity also extends to how they’re increasingly being used by municipalities: to lessen crime or revitalize underused locations.

The city of Everett, for example, struggled with a plaza right across the Everett Performing Arts Center that was being used “for undesirable activities,” said Everett City Planner Carol Thomson.

“You would find people living in the plaza or breaking into electrical outlets to charge phones,” she said.

Then Thomson said the city invited food trucks onto the plaza in 2016 and 2017 and had “increased density with new businesses, more employees [and] housing.”

“It is much more inviting to enter a space where there are other people and other people you can better relate to," she said.

The food trucks, however, eventually left because they weren’t making money, Thomson said.

In Seattle, six food trucks were invited in 2016 to help clean up Occidental Park in Pioneer Square.

“It started slow and built up more and more, and then we started hitting a stride and the park was booming,” said Amato. “You’d go out there on a summer day and the whole place was filled with people eating food and there were people playing ... [on] a giant chess board and the pingpong table.”

But it didn’t last after tension arose between traditional brick-and-mortar restaurants and the trucks, according to vendors. And eventually the trucks were removed by the Downtown Seattle Association.

“We got shut out because restaurants complained,” said Syd Suntha, who works at the Where Ya At Matt food truck, but sold meals at Occidental when he owned the Bread & Circuses food truck. “Ninety percent accurate — that was the reason that was given.”

Now the trucks are at the center of another movement to spruce up a Seattle park. The Seattle City Council this month passed legislation allocating nearly $1 million to clean and landscape City Hall Park, where food trucks have recently been invited in.

A look at when food trucks were invited to Occidental Park in Seattle. (Story by Max Wasserman/KNKX)