Same-day voter registration is coming to WA. Can the state's new system cope?

An upgrade hasn't gone perfectly, but a new law allowing voters to register as late as Election Day will take hold regardless. 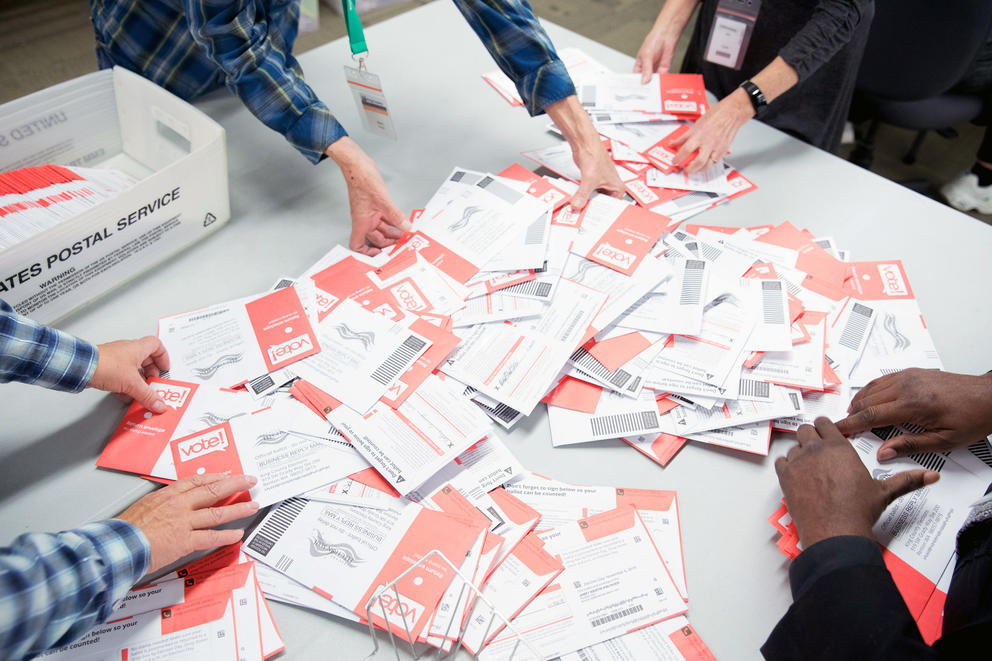 Washington state recently launched an ambitious upgrade of its voter registration system. One of the goals, state elections officials say, is to make it easier to implement a new law allowing same-day voter registration.

But the rollout of the new statewide system, which went live in June, has not gone as smoothly as hoped. Some county elections administrators say they’ve encountered problems with how voters’ addresses appear in the new system, as well as difficulties in processing new registrations.

These issues have left many election officials — including those in King County — uneasy about how well the system will work during the Aug. 6 primary, the first time it will be used in a live election.

Yet, starting this week, offering same-day registration is not optional in Washington state — it’s required by law. And elections officials say they will ensure the new law goes into effect as planned, even if it means creating manual workarounds to ensure people can still sign up to vote in person the day of the election.

“We have had to create these workarounds — basically, Band-Aids — and do our best to get through this election,” Julie Wise, King County’s elections director, said in a June 21 interview.

As of Friday, problems with the system were ongoing, Wise said, even as the state made efforts to remedy issues that cropped up.

The idea behind VoteWA, the new statewide system, is to ensure Washington’s 39 counties are using a unified platform and the same database to manage voter registrations.

State officials have said the upgrade is important for implementing the new same-day voter registration law, so that counties can communicate with each other while updating voters’ registrations in real time.

Under Washington’s system of all-mail elections, ballots are mailed to registered voters 18 days before Election Day. But with same-day registration, people can change the county in which they are registered to vote days or weeks after ballots have already gone out in the mail.

With the new law, which took effect June 30, new voter registrations can be processed online or by mail up to eight days before the election. On top of that, voters can register in-person at county elections offices or voting centers as late as 8 p.m. Election Day.

That means a person can receive a second ballot from a new county, after already receiving a ballot in the mail from another.

The new, statewide system is supposed to help counties handle that situation, so election workers can immediately cancel out the old ballot and process only the new and correct one, said Mark Neary, Washington’s assistant secretary of state.

“Having the new system allows us to do it very cleanly, without having to rely on a phone call or an email,” said Neary, whose office is overseeing the VoteWA upgrade.

So far, however, the system’s performance has not inspired a high level of confidence, said Wise, the King County elections director. The system “had serious performance issues” throughout last week, and even went down for a short time, meaning staff couldn’t access it to process registrations, she said.

“With 19 days until ballots go out in the mail, it’s very concerning,” Wise wrote in an email Friday.

Another issue multiple counties have reported is how the new system cut off portions of overseas addresses. Those defects forced county elections officials to manually correct addresses for military and overseas voters, whose ballots were mailed more than a week ago.

Elections officials also discovered that the new VoteWA system had been truncating apartment numbers on some ballots. State officials say they fixed the problem, but some county election officials are still worried about what other kinds of other, unforeseen complications might pop up at the last minute.

Because of issues with the new system, King County is continuing to use its old voter-registration system for certain purposes, including to print ballots in multiple languages, Wise said.

Thurston County Auditor Mary Hall said she wishes the state had provided time for counties to conduct a mock election, in which they run only 200 or so ballots as a test, before taking the VoteWA system live. So far, she said, her county has noticed delays in how long the new system is taking to process registrations.

“It was taking over 10 minutes per registration. Now I think it’s over a minute, but that’s still long,” Hall said Friday.

Yet Wise, Hall and two other county auditors who spoke to Crosscut said they are confident they will be able to pull off same-day voter registration in the upcoming primary election, no matter what happens with VoteWA.

Their backup plan, essentially, is to do it old-school.

Officials then will know to set the ballot aside and verify the voter’s information before tabulating it, she said.

Wise said King County would follow a similar procedure, which she said will allow them to process same-day voter registrations even if VoteWA isn’t functioning properly on Election Day.

She said her workers will be able to follow that plan even if they are experiencing other issues, such as slowness or difficulty matching the signatures on ballots with the ones stored in the VoteWA system. At one point during a test last month, she said it took King County officials an hour and a half to run 19 ballots, making her worry about how efficiently officials may be able to count votes on election night.

Neary, the assistant secretary of state, said the agency is quickly correcting many of the issues that arise, and still has time to work out additional kinks before the primary election Aug. 6.

“I am confident we are going to get the correct ballot to every single voter, and that they are going to be able to participate,” Neary said.

Pierce County Auditor Julie Anderson said some bumps in the road are to be expected with any new information technology project, particularly one under such a tight timeline. The $9.5 million VoteWA project was delayed a few months after the state’s initial attempt to solicit bids from contractors was unsuccessful, requiring state officials to submit a new request for proposals.

“Not only have we turned voter registration on its head, which we needed to do, but we also are bringing together 39 local databases that were managed and supported by three different software vendors,” Anderson said. “So it’s complicated.”

At the same time, she said, her team is “feeling really good, and we are ready to go.”

“Same-day registration is the law of the land, and it’s going to happen,” Anderson said.

Spokane County Auditor Vicky Dalton said of all the issues with VoteWA that she has encountered so far, launching same-day registration for the first time “is not really high on my worry list.” She’s more concerned about potential delays in processing ballots, she said.

Dalton urged voters to try to submit changes in registration early, to avoid creating a backlog or added strain for already-overburdened elections workers.

“Even if it is same-day registration, don’t wait until the last minute,” Dalton said. “Get in there early, take the pressure off us a little bit — that would be nice.”

Dalton said she feels optimistic that remaining bugs in the system will be able to be worked out in the coming months, a sentiment echoed by other elections officials.

Voters in Seattle and King County can verify their registration information online at King County's My Voter Information application.

People who recently registered to vote for the first time or updated their registration should check back after July 10 to ensure their registration changes were processed, as election employees are working their way through a backlog.

If voters don't receive a ballot by July 22, they should contact their county elections office immediately so they can get a new one issued.

If voters receive a ballot that they feel is inaccurate or doesn't include the correct districts or races for their area, they should contact their county election office immediately.

A complete list of county elections offices can be found here.