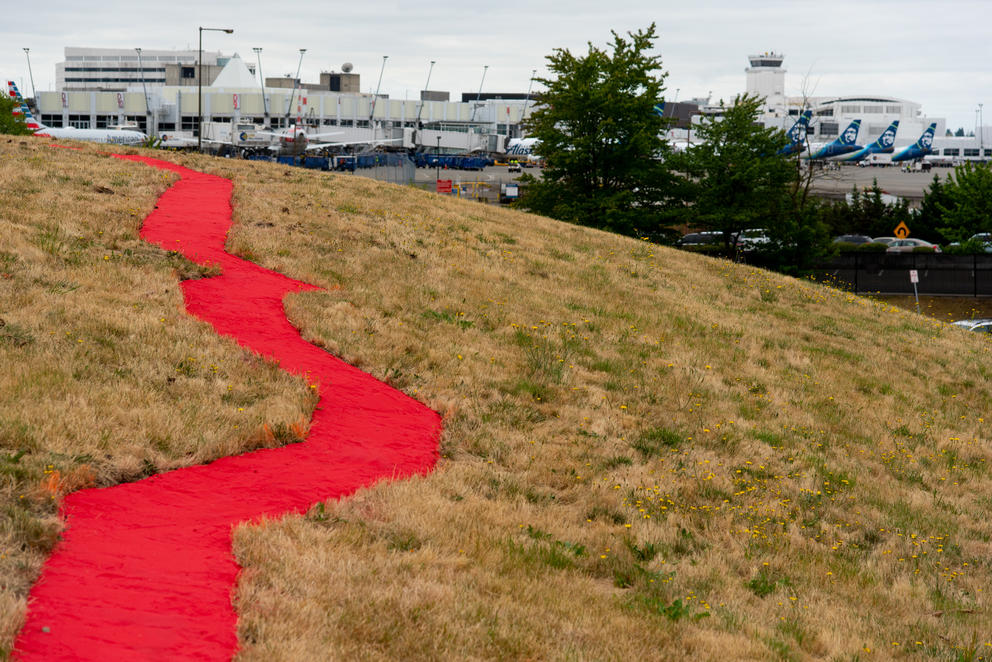 The red sand is shaped in the form of the southern border that divides the U.S. from Mexico. It took nearly 2.6 tons of red sand to build the 350-foot-long line. (Courtesy of Molly Gochman/The StoryMakers)

As an artist, New York-based artist Molly Gochman brings awareness to social justice issues that highlight vulnerability and exploitation. Her past works include Before, a photography project featuring the destruction brought on by floods in Houston and India, and The Give-away Project, in which she gave away nearly all her clothes and documented who took them.

Her Red Sand Project began in 2015, when local organizations in Miami asked Gochman to bring awareness to modern human slavery. She dropped red sand into the cracks of sidewalks to represent those who have “fallen through the cracks” into human trafficking.

Now her Red Sand Project is a thick red line migrating across a small field of dry grass near the cellphone lot at Seattle-Tacoma International Airport.

“This is just a line that separates people… [but] when you see the Earth from above it’s very fluid, so this is for people to think about freedom of movement and ownership,” Gochman said in a recent phone interview from New York. “We have these different boundaries, but when we talk about immigration, it’s about crossing a line from one political area into another.”

It took two days last week to create this U.S.-Mexico border in red sand. A crew dug a shallow trench: 350 feet long and 2 feet wide. They filled it with cement and generously dusted it with 2.6 tons of red sand.

The art installation, known as Border US-MX, can be viewed by passengers on planes flying overhead, from the top of an airport parking garage or while riding the Link Light Rail through the SeaTac station.

It has been created previously at three other locations: the George Bush Intercontinental Airport in Houston, Tougaloo College in Jackson, Mississippi, and Caroline Street in Houston.

The artist wants to call attention to the people crossing the border who are seeking refuge in the U.S., but who could be at a higher risk of being victims of human trafficking.

“Lack of immigration status is a vulnerability that can lead to human trafficking or other forms of exploitation,” Gochman said.

According to the Port of Seattle, in Washington state alone there are an estimated 300 to 500 children being sold for sex work annually. And in 2015, Washington had the 14th highest volume of calls to the National Human Trafficking Hotline. Nationally, the center received more than 10,000 calls reporting a human trafficking case just last year.

“I think public art should be thought-provoking, and this certainly will do that,” said Gregory.

He said the installation was placed just in time to welcome the influx of art enthusiasts traveling in for the Seattle Art Fair, which begins this week, with some “strong commentary.”

The artist said her target audience for this work is people with the freedom to move and travel comfortably and conveniently.

Gochman, who speaks at events about her activism and art, said when people ask her why migrants don’t come into the country legally, she uses her own husband, a Canadian, as an example of how hard it can be to navigate the U.S. immigration system. He only recently received his green card after multiple attempts since 2007.

“It’s really hard to [become documented] legally,” she said, adding that her husband had the privilege of being backed by lawyers provided by his employer.

It can be hard for people to understand what it’s like to be vulnerable and exploited, she added, explaining how discrimination against migrants exacerbates the border crisis and human trafficking.

“I wanted to deepen the conversations around that,” she said.

An earlier version of this misspelled the project name and misstated the amount of sand used.