The sun has set on Jay Inslee's presidential bid 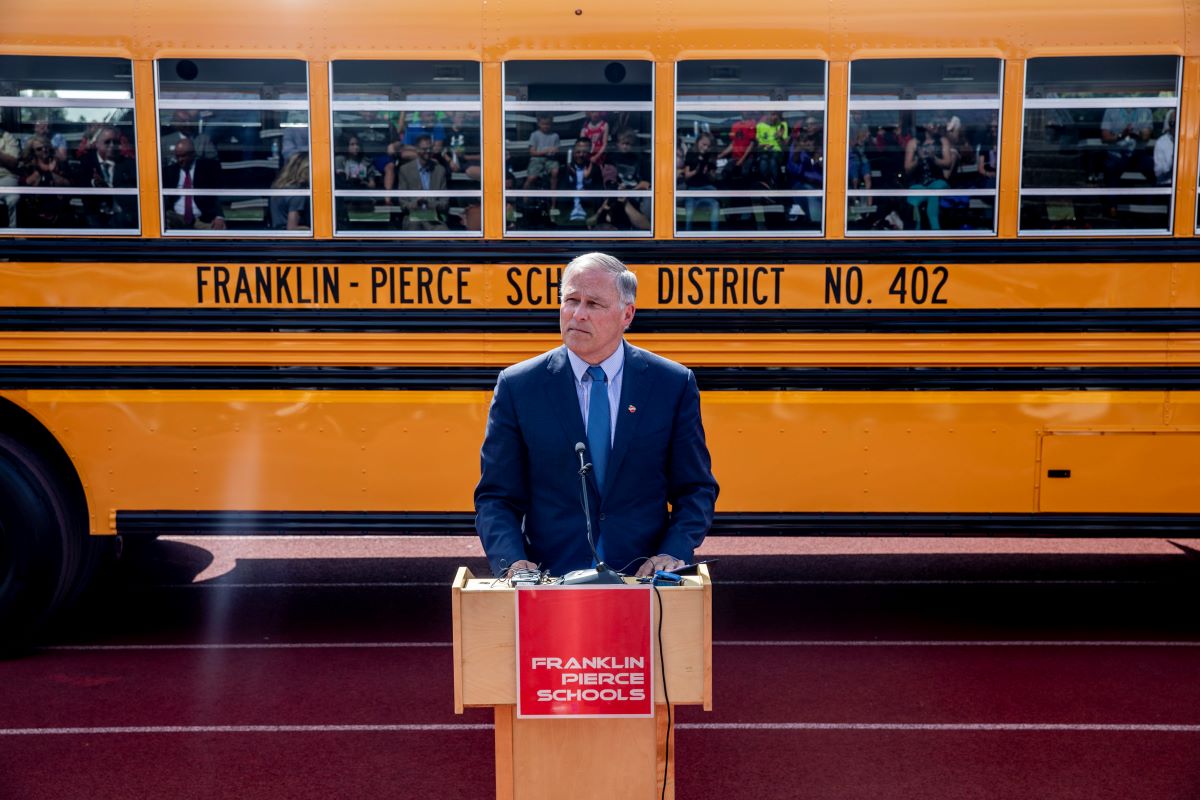 On the eve of the Democratic presidential debates last month, Jay Inslee was showing 1 percent in the polls, about where he was four months and $4 million ago.

Then came the debates. Inslee finally had his moment sparring on national TV with Democratic rivals. Toward the end of the evening he got a big laugh and hearty applause from the assembled Democrats when he named Donald Trump the biggest national security threat to the United States.

A few days later came the CNN follow-up poll. Inslee had gone from 1 percent to an asterisk. He lost ground. A week ago, political pal, climate change ally and past financial backer Tom Steyer, the liberal hedge fund billionaire from California, announced that he was stepping into the race for the Democratic nomination. It was like a baseball pitcher standing on the mound in the third inning, watching his replacement exit the bullpen.

Inslee was largely known as the climate change candidate. He pledged to build his entire administration around the issue.

But it’s risky running on one issue. U.S. Rep. Eric Swalwell of California tried it with gun control. “Common sense gun laws,” to use the focus group catchphrase, works well for liberal Democrats on paper, but not so much on the campaign trail. He was the first candidate to depart the race.

The same thing is happening with climate change. People say they care about it, and they do — from a distance. But up close, when they see the agenda behind it, not so much. From Canada to Australia and, of course, France (the Yellow Vest movement was sparked by a gas tax increase), voters have rebelled at tax hikes or lifestyle restrictions being imposed on them by government in the name of fighting climate change.

Inslee experienced the same resistance up close. Last November he campaigned all out for Initiative-1631, the “pollution fee” initiative that would have boosted the price of gas and home heating fuel. It failed by 13 points in a year the Democrats cleaned up at the polls in legislative contests. He pushed a version of cap and trade in the legislature, but even with handsome majorities in both chambers, it came up short. So did a different version of 1631. All he was really able to achieve was a bill that pledges to reduce greenhouse gas emissions by 2045. And bills of that sort, as everyone knows, are easily amended as deadlines approach.

So articulating a green agenda that would actually build support would be no easy feat for Inslee. But even that door closed on him shortly before he entered the race when, in February, Rep. Alexandria Ocasio Cortez, D-New York, unveiled the Green New Deal with Senator Ed Markey, D-Massachusetts. As policy agendas go, the Green New Deal is preposterously unrealistic. It envisions, for example, a national high-speed rail system crisscrossing the United States, imagining a time “where air travel stops becoming necessary.” And the timetable for this massive undertaking, in addition to a laundry list of other major changes to the economy?  Ten years. It took nearly 20 to bring Sound Transit light rail from south King County to the University District.

But, among activists, the Green New Deal became the standard by which to measure every other environmental agenda. Liberal policy wonks may be impressed by Inslee’s proposals, but most party activists aren’t policy wonks.

To add irony to injury, the Washington Post reported that when Ocasio Cortez’s chief of staff, Saikat Chakrabarti, met with Inslee’s chief climate adviser, Sam Ricketts, in D.C. last May, Chakrabarti candidly admitted that the primary motive for the Green New Deal wasn’t the environment.

Give him points for candor. The environment was simply a stage setter for socialism.

On the financial front, Inslee reported about $3 million in donations during April, May and June. Another $1.6 million was spent on his behalf by the super PAC Act Now on Climate. Not bad if you’re running for the U.S. Senate. But for president? Mayor Pete Buttigieg raised almost $25 million. Joe Biden collected $21.5 million. Close behind was Massachusetts Sen. Elizabeth Warren, with a little over $19 million, and Bernie Sanders with $18 million. Freshman Sen. Kamala Harris of California collected a meager $12 million, but still four times more than Inslee. Tom Steyer, meanwhile, has said he could spend up to $100 million on his campaign.

The Democratic primary is now essentially a five-person race, with the fading possibility of New Jersey Sen. Cory Booker gaining some traction. As other candidates have faltered (namely, Beto O’Rourke), their support has filtered to those who already occupy the top tier.

Inslee’s latest gambit is to hit at some of those leading candidates for not supporting an end to the Senate filibuster, but that’s not likely going to excite voters in Spirit Lake, Iowa, or Nashua, New Hampshire. And vowing to a left-wing audience that he would name Megan Rapinoe his secretary of state just made him look like a big goof.

It’s doubtful Jay Inslee could have changed the outcome by running a different kind of race. The one thing he has in common with Sen. Henry "Scoop" Jackson, who ran 42 years before, in 1976, is lousy timing. Jackson had a tremendous record of achievement courtesy of his skills as a Capitol Hill insider. But he ran in the first election after Watergate, when Americans of both parties were yearning for a D.C. outsider. That’s how we got Jimmy Carter.

Today’s Democratic Party is less politically diverse than it was in Jackson’s day, and it's fully immersed in the identity politics of race, gender and sexual orientation. If Inslee were Black, if he were gay, if he were a she, his candidacy would have additional motive, purpose and vitality for many Democratic voters. Consider Buttigieg, who is bright, charming and youngish, but at best a fair-to-middling mayor of a city the size of Renton. Slender political credentials, but as a military officer, Rhodes scholar and married man, his appeal is no doubt helped by the fact that he is gay. Consider Kamala Harris, who picked a fight over race with old white guy Joe Biden at the recent debate. The line she leveled at Biden about being part of the second class to integrate her elementary school was inaccurate, as the Sacramento Bee was quick to point out. There were Black kids attending Thousand Oaks Elementary before she was even born. But she knew exactly what buttons she was pushing, and it elevated her, at least in the short term, into solid first-tier status.

As for his Inslee’s prospects of being tapped for the second half of the ticket, his chances are remote, owing to Washington already being a reliably Democratic state (when it was more balanced, Republican Gov. Dan Evans was briefly considered for veep by Gerald Ford in ’76). And he has a fair head of steam and the ability to raise money quickly if he seeks a third term as governor.

But the sun has set on Inslee’s candidacy. He still has miles to travel in his political career, but wherever he lands, his destination won’t be 1600 Pennsylvania Ave.