A Seattle City Council committee voted unanimously to tie service provider contracts to inflation, teeing up the issue for likely approval by the full council. 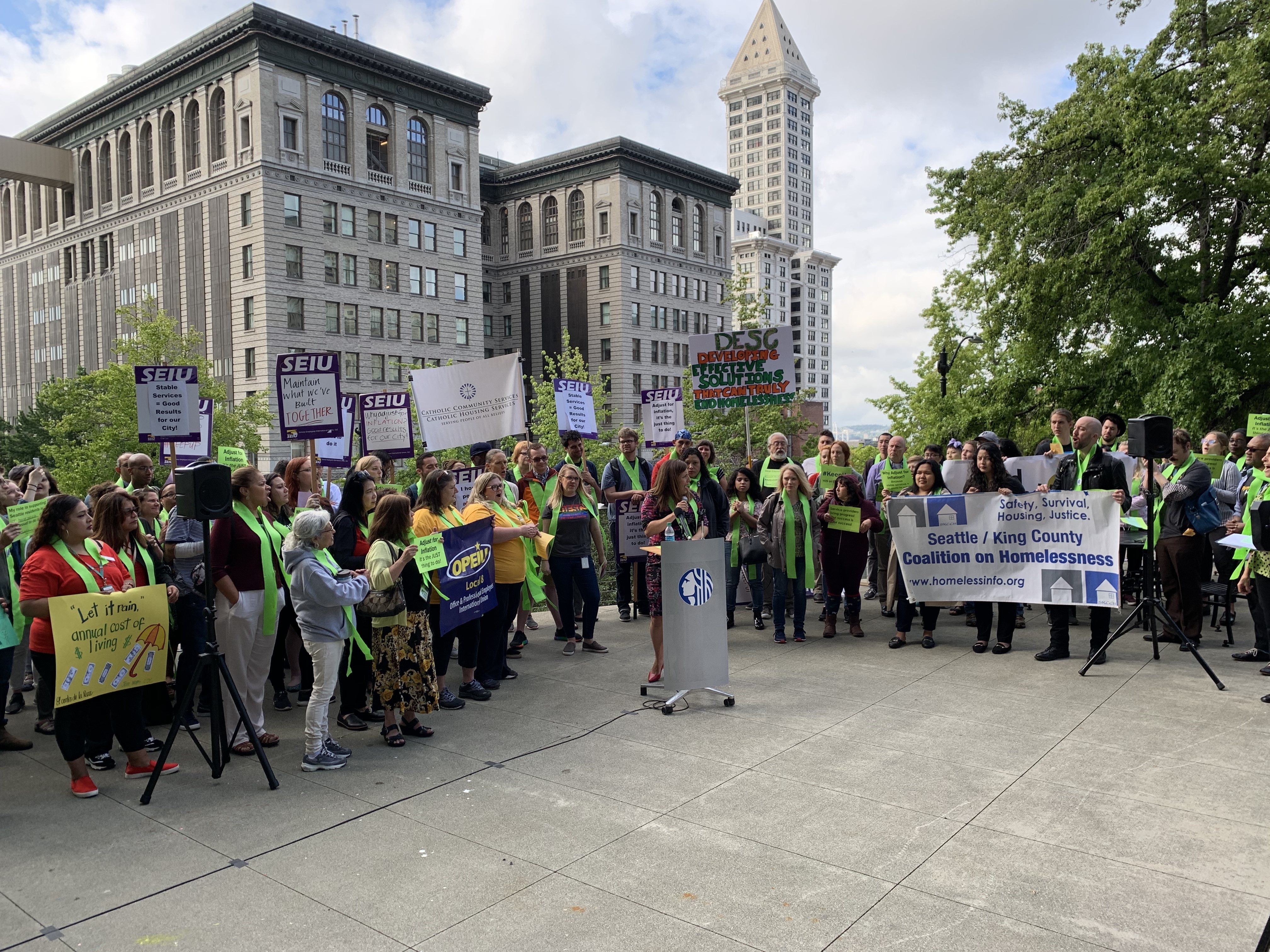 Staff turnover among social service providers is rampant — consistently hovering about 50% a year for many of Seattle’s nonprofit organizations. As a result, employees say the struggle to fill vacancies never ends, institutional memory evaporates and the carefully fostered relationships with clients are lost.

Workers blame a large part of that turnover on the poor pay, consistently less than $40,000 a year. “The difference between the staff and youth is one paycheck,” said Semone Andu, manager of the Orion Center youth homeless shelter.

In an effort to address this long-acknowledged problem of low-paying nonprofit jobs and the rising cost of doing business in the city, a Seattle City Council committee on Thursday approved automatic yearly funding increases for service providers who contract with the city, tying the contract amount to inflation — specifically to Seattle’s Consumer Price Index, which is based on the cost of basic goods. The full council is scheduled to vote on the measure Monday, although council officials said it could get pushed back a week.

It is a novel approach. In past years, increases have been hashed out during the fall’s chaotic budget season. In last year’s budget, the council granted a 2% raise.

But advocates for the baked-in hikes say the situation is dire enough and the work important enough that pay increases should not be at risk every time there is a new budget.

“We should not be in a position every year to rehash the why, when it's so obvious that if you don't have stable services being provided by these human service contractors, then our seniors and our vets and our families and our youth suffer,” Councilmember Teresa Mosqueda said in an interview.

Though the legislation is meant in part to address lagging wages, Mosqueda specified that it is about much more than wages alone. She said, "The cost of retail space has increased, yet those contracts did not get an increase to reflect that inflation. The cost of water has increased, health care, City Light bills."

But while the idea of guaranteed contract increases has broad support in principle, several council members expressed concern about the implications of predetermined increases, if and when a recession hits.

The Seattle Human Services Department contracts with more than 180 organizations for a total of about $134 million a year. In the past 12 months, Seattle’s CPI has increased 2.9%. If that held, that $134 million would grow to about $179 million by 2029.

Calling herself the “cranky budget chair,” Councilmember Sally Bagshaw proposed tying the maximum wage increase to the growth of the city’s general fund. It was an attempt to give the council more flexibility if the economy turns south and the council needs to make cuts.

“I am looking at this more from the standpoint of not tying council’s hands,” she said.

Mosqueda and others pushed back, saying those would be the times when paying service workers is the most important. Bagshaw ultimately withdrew her amendment for lack of support.

Rather than providing human services itself, the city contracts with nonprofits across the city for everything from homeless services, food banks, support for domestic violence survivors and more — all groups that would be impacted by the proposed legislation.

Mosqueda said the best apples-to-apples comparison is the state minimum wage, which is adjusted for inflation every year.

But the way in which the council is guaranteeing wage increases to service providers by way of legislation is unique. Several council members said this was a reflection of the city’s values and the importance of the work.

“They cannot help people get into housing, stay on their medication, make sure people are getting access to food if they are operating with half the staff,” said Mosqueda. “If they have 40% to 50% turnover and vacancy rates, they are unable to fulfill their contracts.”

It’s well known that homelessness in Seattle has increased to the point that it has been declared an emergency. As the homeless population has increased, the challenges facing providers’ clientele have become more severe — which in turn makes turnover even more disruptive as new employees deal with problems that exceed their level of experience.

“Let’s not kid ourselves: I think that this city’s homeless and social service response is built on the backs of workers in nonprofits that are paid under a living wage often times,” said Bill Hallerman, director of Catholic Community Services.

Outgoing Councilmember Mike O’Brien has long fought for wage increases for service providers, but had so far done so only in the context of the budget debate.

The council voted the legislation out of committee Thursday with a 5-0 vote, enough for a council majority and all but guaranteeing it will pass the full council. Additionally, Bagshaw and Councilmember Debora Juarez said they supported the legislation, but had to leave the committee before the final vote.

One question remains to be answered. Council President Bruce Harrell expressed concern that the legislation did not mandate that service providers use the additional funds for wages. Other council members said there were mechanisms for oversight already built into the city’s process. However, Mosqueda left open the possibility for future discussion and proposed pushing the final vote back a week. As of now, it remains scheduled for Monday.

Correction: An earlier version of this story indicated that the bill was meant only to address social service worker wages. The bill is meant to address the rising cost of office space, bills and other costs of business along with wages.