The private bid includes plans for 175 units of affordable housing on the site, $78.2 million for housing investment and $5 million to deal with homelessness. 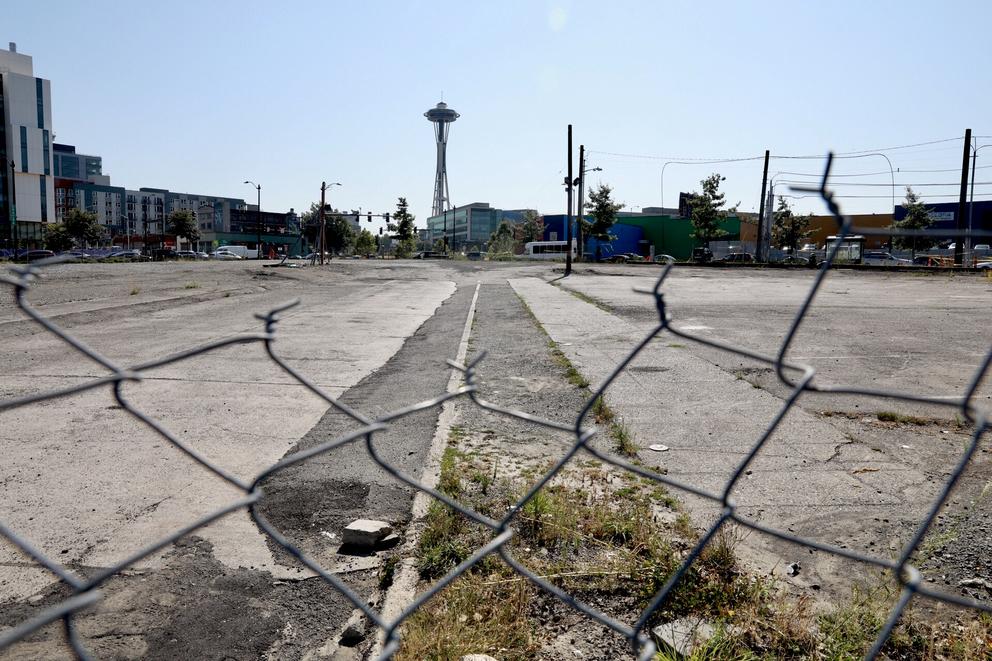 Standing in an empty, fenced-off parking lot along Dexter Avenue this morning, Mayor Jenny Durkan announced the $143.5 million sale of a city-owned property in South Lake Union. The buyer, Alexandria Real Estate Equities, plans to transform the land into a new life sciences campus for biotechnology or medical research.

As part of its bid for one of the last large plots of undeveloped land in the heart of Seattle’s tech hub, Alexandria committed to building 175 subsidized apartments for low-income residents, a $5 million donation to address homelessness, a new community center for Seattle Parks and Recreation, bicycle and pedestrian improvements on Eighth Avenue and Mercer Street and more. In addition, the city plans to spend $78.2 million of proceeds from the sale on measures meant to address Seattle’s affordable housing and homelessness crises.

“This is a generational opportunity to take an underutilized city property and make a real transformational investment to create jobs, create more affordable and mixed-income housing and build more safe transportation connections,” Durkan said at a press briefing about the sale last week.

The so-called Mercer Megablock is a 2.8-acre plot bordered by Roy and Mercer streets to the north and south and Aurora and Ninth avenues to the west and east. Dexter Avenue divides the property in two. The Seattle Department of Transportation (SDOT) bought the land to serve as construction-equipment storage during the five-year Mercer Corridor project. When that wrapped up in 2015, the city was left with an extremely valuable plot of land it no longer needed.

The city bundled the 2½ city blocks into one parcel for sale and put out a request for proposals (RFP) in July 2018 for developers around the country to submit bids. The RFP required a few things, including meeting LEED gold building standards and paying for environmental remediation on site. It didn’t mandate that developers build affordable housing or provide public space on the site, but said these were priorities for the city.

The city received bids from seven developers in October. They selected Alexandria’s bid, which the city estimates includes $275 million to $305 million worth of public benefits, and negotiated final terms over the winter and spring.

Alexandria is a publicly traded real estate investment trust with properties in New York, San Francisco, Boston, North Carolina’s Raleigh-Durham “Research Triangle” and elsewhere. In Seattle, it owns or is in the process of constructing 1.5 million square feet of space for Fred Hutchison Cancer Research Center, University of Washington, Bristol-Myers Squibb and others.

The company plans to build a two-building life sciences campus on the larger megablock parcel east of Dexter. The exact design is still to be determined, but each building can be about 16 stories tall. One of the buildings will contain a 30,000-square-foot public community center operated by Seattle Parks, which will pay no rent on the space for 40 years. The other building could possibly contain ground floor commercial space or a restaurant.

In order to combine two blocks into one parcel, the Seattle City Council voted to vacate the block of Eighth Avenue that previously ran through the eastern portion of the megablock. In exchange for use of Eighth Avenue, Alexandria must build a publicly accessible pedestrian plaza on the old street. The developer is also extending the Mercer Street-protected bike lane from its current end at Dexter east to Ninth Avenue.

On the half-block parcel west of Dexter, Alexandria plans to build 175 units of subsidized affordable housing. The building will include a mix of studios, one- and two-bedroom apartments affordable to households earning 60 percent of area median income or less, which works out to about $42,000 annually for an individual. Alexandria is obligated to keep those units subsidized for 50 years. City officials said that it would have taken about $17.5 million in city funding, plus another two to three times that in state and other funding sources, to build the equivalent amount of affordable housing. It’s not all charity for the developer, however. In agreeing to build and subsidize the affordable housing, the city dropped about $38 million off the sale price.

Alexandria is also considering building as many as 190 market-rate apartments in the same building. If it does, it will likely participate in the city’s Multifamily Tax Exemption program, which gives the company a property tax break in exchange for subsidizing 20% to 25% of the apartments at prices affordable to someone earning 80% of area median income (currently about $57,920 a year for an individual). The city estimates that many market-rate units would also generate $3 million to $4 million for the city housing fund through MHA.

In June, the company also bought the privately owned half block next to the piece of Mercer Megablock where it will build housing. The site is currently home to Copiers Northwest and sold for $28.5 million.

Alexandria is also giving the city $5 million for a one-time expenditure meant to address the homelessness crisis. City Budget Director Ben Noble could not provide an example of what that expenditure might be, but said he believed these are needs that are “truly one time,” meaning the city wouldn’t later have to find a recurring revenue source to continue paying for a program.

“Our goal is to create a new model of urban development that supports our mission to advance human health while also addressing some of our community’s most pressing challenges,” said John Cox, Alexandria’s senior vice president for the Seattle market. “The Mercer Megablock provides a tremendous opportunity to build a fully integrated, mixed-use life science campus.”

Alexandria did not specify why it was willing to pay so much in public benefit on top of the already pricey land. But Steven Shain, the city budget office project manager who led negotiations on the megablock sale, said, “One truism is they don’t make much more land these days and they’re not making more land in South Lake Union. … Alexandria sees Seattle as where they want to be and grow.”

The megablock was the center of a debate about how Seattle should reuse underutilized public land. Last fall, the Seattle City Council passed a resolution stating that when possible, city-owned property should be used to build affordable housing. Advocates argued that using the Mercer Megablock to build thousands of units of affordable housing in the heart of the city would be a logical step in the face of Seattle’s ongoing affordable housing shortage. But Budget Director Noble said the private sale has facilitated far more housing and other public benefit at a lower cost to the city. “We would’ve forgone way too many things," he said. "For one, we would’ve had to find revenue for building the housing, which, as we know, we have a shortage of.”

About $29.1 million of the $138.5 million sale price will go toward repaying debts the city incurred to purchase the land in the first place or borrowing against the value of the land over the past few years; $16.7 million will be spent on bicycle, pedestrian and transit projects; and $9.2 million will be used to offset a budget hole created by unexpectedly low commercial parking tax revenue in 2018.

The bulk of the available funding will be invested in affordable housing programs. About $15 million will be used as a revolving loan fund through the city’s Equitable Development Initiative to help nonprofit developers acquire land for low-income housing developments.

The city will use $42.2 million to buy property for affordable housing development in neighborhoods with high risk of displacement, especially around future light rail stations.

Approximately $15 million will be used to build affordable homes meant to be purchased by low-income residents. “We know that investing in permanent affordable homeownership is an effective tool for addressing displacement and for advancing racial equity,” said Leslie Brinson, Durkan’s senior policy adviser.

Finally, $6 million will be spent to create a loan program meant to help low-income homeowners construct basement apartments or backyard cottages. “There’s an inequitable access to capital for folks,” said Brinson. “We’re looking at how we work with low- and middle-income homeowners so they can access the benefits of the land use changes and create affordable ADUs [accessory dwelling units] in their homes or on their property.”

Alexandria is likely still a few years from starting construction. The city council is expected to approve the land deal in September. The transaction between the city and Alexandria will close in early 2020. Then permitting and construction can begin later that year or in early 2020.

Correction: An earlier version of this story misspelled Leslie Brinson's name. The story has been corrected.

Update: The story has been updated to explain what 60% area median income equals in annual salary. 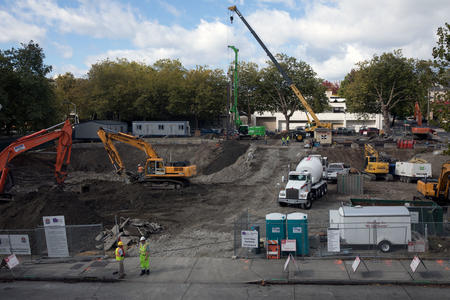 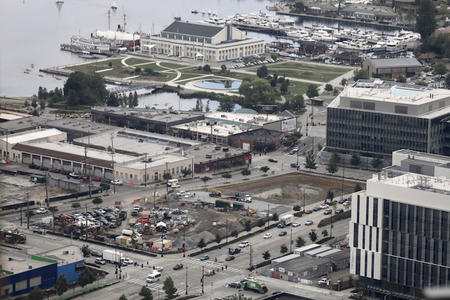 by / July 17
Article continues below

The Elliott Bay Fishing Pier was a diverse hub where locals connected with surrounding nature. Will it ever come back?