Dr. Frederick Rivara is leading a new effort to study gun violence, decades after his work prompted backlash from the National Rifle Association. 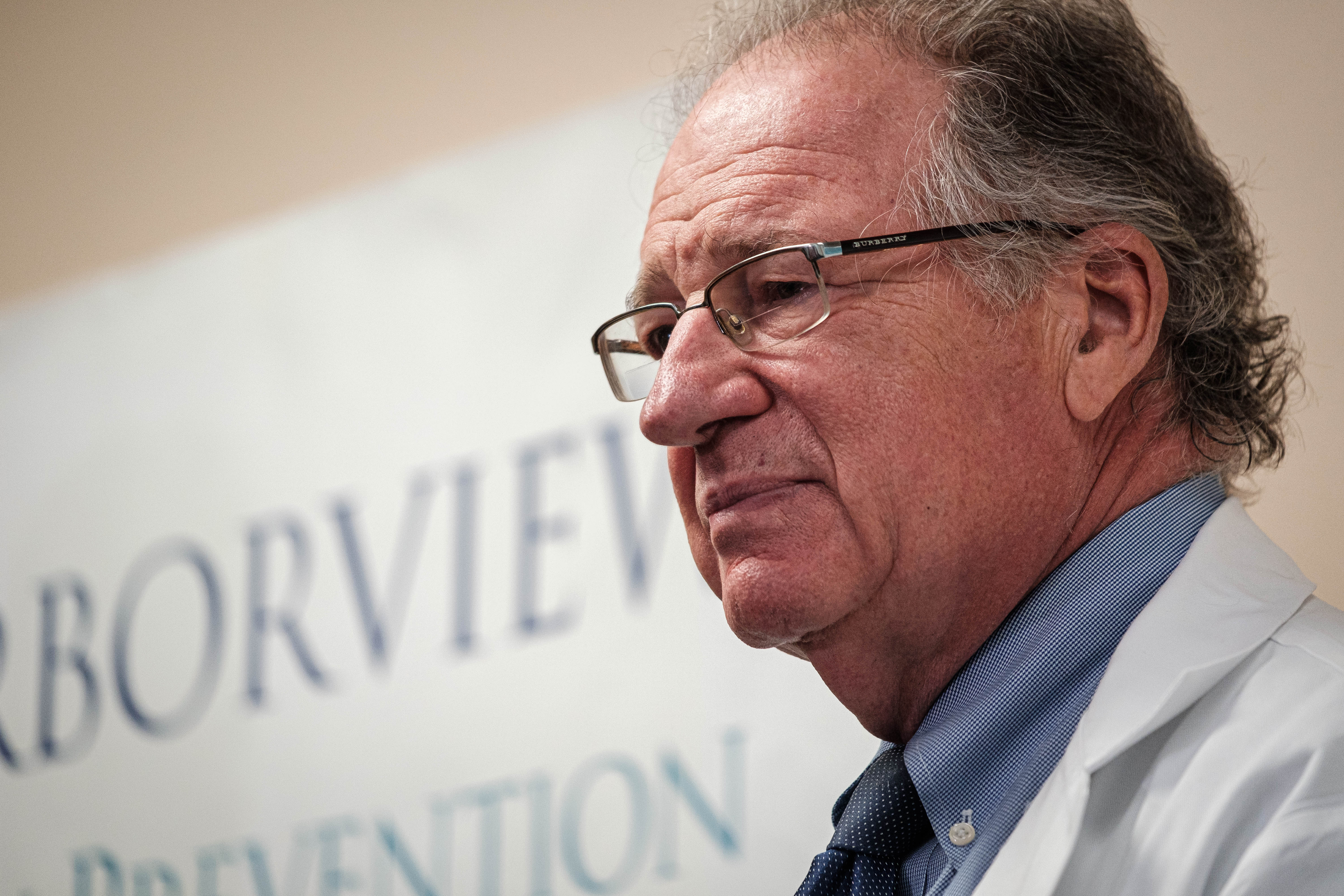 Dr. Frederick Rivara speaks at Harborview Medical Center on July 26, 2019. Rivara, who will direct a new program at Harborview researching the effectiveness of firearm safety policies, has been a leader in gun-violence research for decades. (Photo by Caean Couto)

For more than two decades, scientists and medical researchers say they’ve been hamstrung by Congress when it comes to studying firearms and how to reduce gun-related deaths. The Dickey Amendment, which Congress approved in 1996 and later expanded, has been widely interpreted to limit federal funding of research into gun violence and its prevention.

The National Rifle Association pushed hard for those research restrictions, following several high-profile articles in the early 1990s that laid out the dangers of keeping a gun in the home.

A key force behind those groundbreaking studies was Seattle’s Dr. Frederick Rivara.

A professor of pediatrics at the University of Washington School of Medicine, Rivara continues to conduct research into gun violence and the effectiveness of firearm regulations to this day.

It’s an area of study he refuses to drop, despite the backlash and roadblocks his work prompted many years ago.

This summer, Rivara was named the director of a new program at Harborview Medical Center to study public policies and their effects on gun deaths and injuries. The Firearm Injury and Policy Research Program is funded by $1 million from the Washington State Legislature, rather than from Congress — a way of working around the federal restrictions on funding firearms research.

Rivara, now 70, has published more than 700 papers over the course of his career. Of those, the studies Rivara worked on in the 1990s linking gun ownership with higher risk of firearm deaths are among those that continue to reverberate.

One study Rivara co-authored in 1992 found that keeping a gun in the home increased the risk of suicide by nearly fivefold. Another case control study, from 1993, found that the risk of homicide increased by about a factor of three when people had guns in the home. Both studies were published in the prestigious New England Journal of Medicine, with Rivara listed as co-author and co-investigator on each.

“Absolutely he shaped national policy around this subject,” Vavilala said.

Rivara previously led the Injury Prevention & Research Center when it was in its infancy, starting in 1987. The center became one of the first injury-prevention centers in the country to receive funding from the federal Centers for Disease Control and Prevention (CDC), Vavilala said.

Rivara and other researchers from different regions used that federal money to conduct some of their influential studies linking gun ownership with increased risk of homicide and suicide.

The backlash from the NRA was swift. "It was in response to those studies that the Dickey Amendment really was born, and resulted in that chilling effect we have experienced in the past 30 years for funding for research," said Dr. Ali Rowhani-Rahbar, an associate professor of epidemiology at the UW's School of Public Health, who is co-directing Harborview's new gun-violence research program alongside Rivara.

In an interview this month, Rivara said those particular studies caused a stir primarily because they cast doubt on the NRA’s repeated assertions that owning a gun makes you safer.

Increasingly in the decades leading up to the 1990s, Rivara said, the NRA had promoted gun ownership as an effective means of self-protection.

The publication of the studies contradicted all that, Rivara said.

“It was a prominent article published in a prominent medical journal, with support from the CDC, saying that having a gun in the home is actually a problem,” Rivara said. “So it really threatens the whole idea of, ‘Why do you have a gun?’”

Rivara said the NRA quickly did several things to try to undermine the team’s findings. “They called it pseudoscience and they tried to do a number of things to counter it,” Rivara recalled. “They had articles about it in their monthly magazine, called The American Rifleman, and urged their readers to write to Congress, saying this was a waste of federal dollars.”

The NRA also attacked the researchers’ professional credibility, he said.

“They tried to get the NIH, the Office of Scientific Integrity, to do an investigation of us, saying we were fraudulent scientists,” he said, referencing the National Institutes of Health. "The NIH refused to do that."

The NRA did not respond to a request for comment from Crosscut.

Currently on its website, the NRA’s lobbying arm strenuously objects to framing firearms as a public health problem. In so doing, the group references “studies conducted by gun control supporters in the 1980s and early 1990s” as part of what led Congress to ban the use of taxpayer money for “research advocating gun control.”

That mirrors the phrasing used in the Dickey Amendment, the 1996 policy adopted by Congress. The amendment said none of the federal injury-prevention funding provided to the CDC could be used “to advocate or promote gun control.” That language was later extended to all agencies under the umbrella of the U.S. Department of Health and Human Services.

There is some disagreement over whether the amendment's language actually precludes federal money from going toward studying the health effects of guns.

Rivara said the evidence-based research he conducts shouldn’t be equated with lobbying or promoting particular policies. As state employees, he and his colleagues at Harborview can’t lobby, he noted, though they might occasionally offer factual testimony on the findings of their research.

With that distinction in mind, he said he has asked why CDC leaders can’t redirect some of their existing budget toward firearms research projects.

He said he thinks agency leaders fear repercussions from Congress if they were to take such an action.

“They feel like Congress has specifically said, ‘No, we’re not going to fund firearm research.’ And if they do some money-shifting, Congress will take revenge out on the CDC.”

In an emailed statement, a spokesperson for the CDC said the agency continues to do some data collection and analysis on gun-related injuries, even though the agency “does not receive direct funding for firearm-related research.” The agency did not respond to a subsequent inquiry about whether it could shift some of its budget toward supporting additional research projects, as Rivara suggested.

Whether or not the language of the Dickey Amendment truly bans federal support of gun-violence research, the practical effect has been keenly felt, Rivara said. “There’s good data to show that, after ‘96, the number of research papers on firearms decreased because of the lack of funding to do the work,” he said.

Rowhani-Rahbar, co-director of the new Firearm Injury and Policy Research Program at Harborview, said the lack of funding for research discouraged an entire generation of people from pursuing firearms research. He said that has contributed to substantial gaps in knowledge:  For instance, researchers don’t know for sure how many people across the country own guns, or how many people are shot and injured each year, but not killed, he said.

“We call it the ‘lost generation,’ because for two or three decades, people wouldn’t enter this field,” Rowhani-Rahbar said. “There was no funding, and people knew there would be no future.”

That has changed only in the past few years, he said, as mass shootings such as those at Sandy Hook Elementary in Newtown, Connecticut, and in Parkland, Florida, have prompted younger researchers to take interest — as well as spurred private foundations to supply more funding for research.

Rowhani-Rahbar said Rivara has been an outstanding mentor to those young doctors and public health researchers. “He has single-handedly contributed to the preparation of whole new generations,” Rowhani-Rahbar said.

“He is tireless, and what keeps him going is his passion for this type of work. … He’s a born leader and he continues to lead,” Rowhani-Rahbar said.

Throughout his career, Rivara has published other influential papers about injury prevention, including research about the safety benefits of wearing helmets while bicycling. But Rivara said what keeps him coming back to researching firearm injuries are the grim statistics.

While the likelihood of dying in a motor vehicle crash has declined in recent decades, he noted the number of annual firearm deaths has gone up in the United States in recent years, leaving the rate of gun deaths higher than it was in the late 1990s.

With the new research funding from Washington’s Legislature, Rivara said he hopes to study which types of laws are most effective in curbing gun-related deaths. Those kinds of studies have been limited by the lack of federal funding in recent years, he said.

For now, Harborview researchers are looking to evaluate the effectiveness of policies such as state-level “red-flag” laws, including Washington’s extreme risk protection orders. Those orders allow the temporary removal of firearms from people deemed to be at a high risk of harming themselves or others.

“I think one thing is to really look carefully at the effectiveness of laws that have been passed, including the implementation of those laws,” Rivara said.

“The NRA is correct when they say there are already lots of laws on the books about guns. But I think what we all want to know is, ‘Which laws work?”