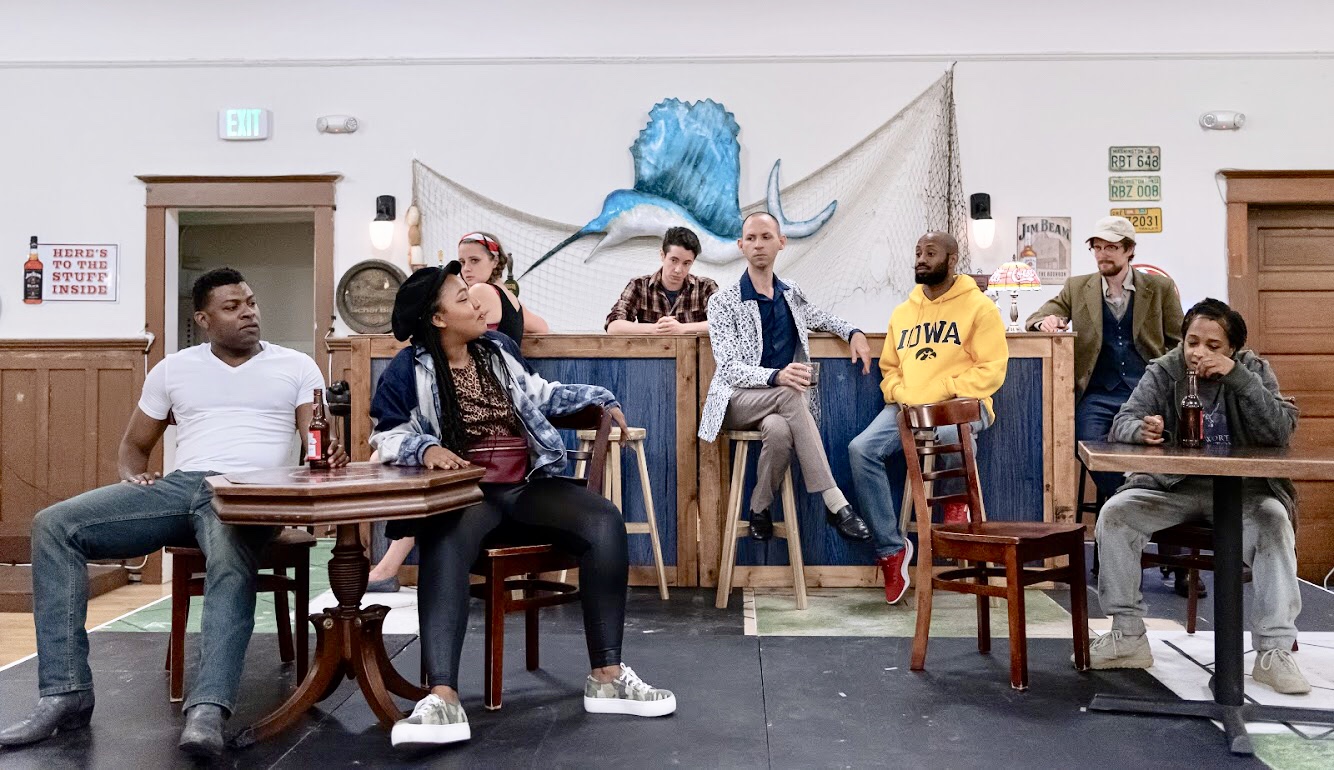 The clientele at a Southern California dive bar called Monk’s Place mutter wistfully and rage loudly about the indignities of life. They fly into jealous rages, seduce each other, break up with and rescue one another. They party hearty and, boy, do they drink. And drink. And drink.

The nomadic theater company The Williams Project has turned a spacious first-floor room in Washington Hall into a vivid Monk’s Place — complete with functional bar and barstools — where Tennessee Williams’ play Small Craft Warnings takes place. Soon the ensemble will transform it into another mythical gin joint, Nick’s Pacific Street Saloon in San Francisco, the setting for the William Saroyan classic, The Time of Your Life. Bundled under the title “The Bar Plays,” the two works run alternate days and times.

Washington Hall is a serendipitous locale for plays about patrons of a special local hangout, a “third place” that political scientist Robert Putnam’s hallmark book Bowling Alone (2000) defines as a welcoming oasis, a comfort zone apart from home or work. Erected in 1908, the stocky red-brick Washington Hall, on 14th Avenue, has played host over the years to a Danish immigrant social club, a Jewish congregation that presented a Purim play and the Filipino Press Club. Marcus Garvey lectured on Black power there. And music lovers danced to the live sounds of Duke Ellington’s band and Jimi Hendrix’s early group, The Rocking Kings. Mark Morris introduced his fledgling dance company in the building, when it was home to the On the Boards performance venue, which rented it from the Sons of Haiti, a Masonic Grand Lodge.

“I’m always looking for performing spaces that have a rich community history,” says Ryan Purcell, artistic head of The Williams Project and inventive director of its productions. (Last summer, he staged “Blood Wedding” in the loading dock of a Georgetown warehouse.) “I love that Washington Hall is at the intersection of the CD [Central District], ID [International District] and Capitol Hill, Seattle's historic meccas for Black, Asian, and LGBT communities. I love that it was Seattle's first integrated music venue. And I love the feeling of the people that make their way through this space.”

The characters inhabiting The Bar Plays are a motley crew, who express the mood and intentions of two distinctive playwrights steeped in Americana, the colorful and the calamitous. And in Purcell’s staging, these characters rub elbows with audience members seated at nearby tables and nursing drinks from a cash bar.

“The plays are full of folks that are our neighbors, whether we want to acknowledge them or not,” Purcell says. “Folks struggling to make ends meet, folks struggling with addiction, folks being squeezed by the economy…. I want these plays to give Seattleites a chance to see the full, joyful, flawed humanity that we often ignore.”

The Williams Project stages ‘The Bar Plays’ at Washington Hall through Aug. 25; $30-$50 or pay-what-you-can.

In the darker, sketchier Small Craft Warnings (1972), whose very title suggests psychic danger, the aging, alcoholic and no longer trendy Tennessee Williams diverted from the “well made” dramas of his past (The Glass Menagerie, Streetcar Named Desire) into more impressionistic, seedier territory.

The play is an animated portrait gallery of lost souls, and souls fighting to be found. There’s a haggard, down-and-out prostitute (played by Madeleine Lambert), a washed-up physician (Max Rosenak), a jaded gay screenwriter (Grant Chapman), who has picked up a gentler hippie drifter (Lamar Legend). And blazing through the dazed and disillusioned is Leona (the sometimes hard to hear but otherwise terrific Kemiyondo Coutinho), a fierce beautician who can be monstrous or magnanimous, but won’t go down without a fight.

Saroyan’s people are generally more romanticized and relatable. They are Depression-era denizens (The Time of Your Life debuted in 1939) who are less rambunctious seekers, dreamers and manipulators. Holding court at Nick’s waterfront tavern, the enigmatic benefactor Joe (Chapman) looks on with amusement and periodically intercedes in the lives of others — a sweeter streetwalker, eager young entertainers, some slumming rich folk, a gregarious eccentric who is a throwback to the Old West of Buffalo Bill and Kit Carson.

What the two drinking holes have most in common, other than a retinue of thirsty individuals fleshed out to urgently tragicomic life by actors drawn from numerous cities, is their function as communal harbors. Observes Purcell, “I think a bar and a theater both can serve as a ‘third place’ [where] misfits can come together. I also think there's a relaxation and welcome that bars are pretty good at creating that is also something I'm always looking to create with theater.… So I started reading plays set in bars and these two rose to the top.”

Purcell also is attuned to the role of liquor as a tongue-loosening, mind-numbing agent in social mingling at bars. (For those who don’t want to be around liquor, he has scheduled a few “dry” performances.) Purcell believes people have been drawn to taverns “without a lot of introspection about how and why we have so much alcohol in our social interactions. I don't mean to judge drinking or bars. But I do think it's one of those underexamined elements that shapes a lot of our social interactions, and it's worth peering in to.” 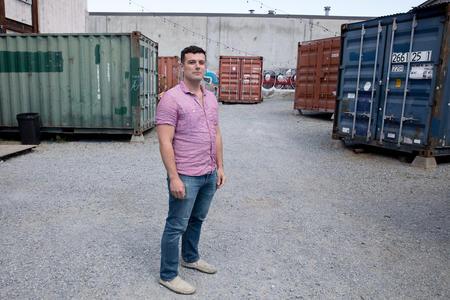 Indulge in poetry and paella at this immersive theater performance directed by Ryan Guzzo Purcell.

Certainly, public self-medicating is so much a part of our culture that in the many stage and screen dramas set in bars — from the silent pro-temperance film Ten Nights in a Bar Room to the modern TV series Cheers— booze plays a leading role, destructive and euphoric.

But as a homey dive where people can drop in, socialize and easily feel at home, neighborhood bars have served a special function for centuries, just as diners, music clubs and other hangouts do. And quite a few of these informal, “neutral” establishments, in booming Seattle at least, are an endangered species, as chronicled by watchdog group Vanishing Seattle.

Some of the city’s cozy musical night spots, like Tula’s and Highway 99 Blues Club, are being displaced or shutting down, as are friendly and affordable neighborhood eateries, bars and bookstore chains.  And whatever you think of them, doomed shopping centers like the Northgate Mall also have been social magnets where people convene to shop, eat, stroll or just not be alone.

Change is a constant in a society where economy and business trends are in flux. But as the San Francisco urban advocacy group livablecity.org notes, “Bars and clubs have long histories of providing sanctuary, culture and sense of place, especially for LGBTQ people, as well as incubating arts and music scenes.”

So it is important, and hopeful, that “The Bar Plays” are being presented in a venerable gathering place that has survived.

Despite the rapid-fire gentrification of the Central District, Washington Hall remains a cultural bastion, now managed by several nonprofits: 206 Zulu, which promotes hip-hop culture; the Eritrean community group Hidmo Cypher; and Voices Rising, which promotes LGBT youth arts. No matter what happens around it, this building remains a vital “third place.” And it is the right place to experience The Williams Project’s timely, riveting revival of these still valuable plays.

Indulge in poetry and paella at this immersive theater performance directed by Ryan Guzzo Purcell.