A federal judge ordered a new plan from the city. Community groups think the one the mayor delivered won’t work. 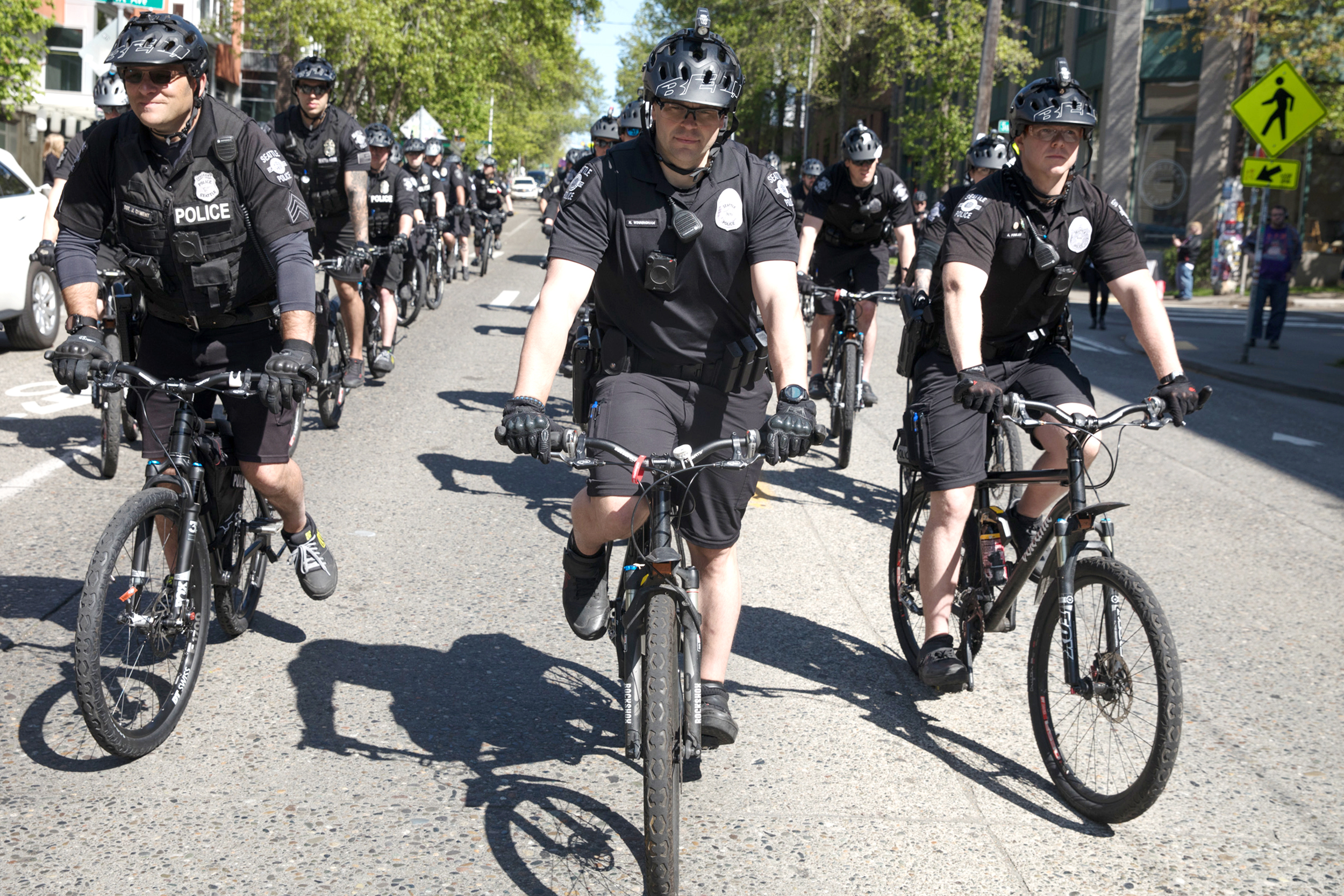 Seattle Police officers during May Day protests in Seattle, May 1, 2019. (Photo by Matt M. McKnight/Crosscut)

In a court filing Thursday, Mayor Jenny Durkan presented a federal judge her plan for bringing Seattle back into compliance with a 2012 agreement to reform the Seattle Police Department.

The mayor's office intended the filing to be a prudent approach toward further assessment of issues with the city's police accountability system that were identified in May by Judge James Robart of the U.S. District Court for Western Washington.

But community groups and the city’s civilian Community Police Commission (CPC) have argued the time for assessment has passed — completed as part of the CPC’s many years of work — and that the mayor’s approach sidesteps the judge’s demands.

Notably, Durkan’s proposed path forward does not include any request to the city’s two police unions to return to the bargaining table to address the judge’s concerns — an approach called for by the CPC. Durkan has shunned the idea from the beginning — as have several labor unions in the city — arguing it would be a dereliction of the collective bargaining process. Additionally, officials have pointed out that the city cannot force the unions to reopen negotiations.

Instead, Durkan’s office is promising to prioritize Robart’s concerns in the next round of contract talks with the unions, scheduled to begin next year.

At the same time, the mayor has hired a team of outside consultants, which is proposing a comparative study between Seattle and 20 other cities. The team would also conduct a detailed examination of how the current contracts would or would not hold officers accountable — specifically examining the circumstances that led to the reinstatement last year of Officer Adley Shepherd, who originally was fired for punching a handcuffed woman.

(On Friday, Shepherd's reinstatement was overturned by a King County Superior Court Judge.)

This process is important, the city argued, because Robart has not said with certainty what a proper accountability system looks like.

“The outcome will be objective, evidence-based observations about the strengths and weaknesses of the City’s accountability system which will assist the City in collective bargaining,” the city wrote in its filing. “The City also believes that the assessment will benefit the Seattle Police Department (SPD) and increase public confidence.”

“The findings, observations, and policy alternatives contained in the Accountability Assessment will influence and inform the City’s collective bargaining priorities,” the filing later read.

Initial drafts of the proposal sparked ire from the civilian advisory CPC — which last week unanimously rebuked an early version of the mayor’s proposed path forward. Other local advocacy groups, including the American Civil Liberties Union of Washington, have also expressed concerns, and Thursday’s filing is unlikely to quell that anger.

The CPC argues that the contracts recently negotiated with the city’s two largest police unions rolled back a landmark police accountability law passed by the Seattle City Council in 2017. To win back Robart’s approval, the group has argued, the city should bring the contracts into line with that ordinance.

But in the commission’s view, Durkan’s hiring of consultants ignores the work the group already did on that 2017 police accountability bill. Those concerns were echoed by three members of the Seattle City Council — Lisa Herbold, Teresa Mosqueda and Lorena González.

“Comparing Seattle’s disciplinary and appeals system to those of other cities — while an interesting exercise — is not particularly helpful or on-point right now,” the CPC said in a letter last week, responding to an initial draft of the proposed path forward. “Through a years-long process, Seattle stakeholders identified, advocated for, and then secured in the accountability law many essential elements to a fair and legitimate system.”

The CPC and other community groups have expressed concern that, by refusing to ask the unions to return to the bargaining table, the city risks falling short of Judge Robart’s expectations, causing more delay.

“It could well be another full year before the City and unions return to the bargaining table to begin bargaining to correct current deficiencies (keep in mind the City and SPOG [Seattle Police Officers Guild] took four years to complete bargaining last time, with SPOG voting down the initially proposed contract),” the CPC said in its letter. “This means the system that the Court has determined to be out of compliance with the Consent Decree will continue to operate for at least several more years.”

The CPC has acknowledged that the city cannot force the unions back to the table, but has argued that the mayor’s office should ask the unions to agree to more negotiation in order to avoid further extending the consent decree.

Robart found the city out of compliance in May, citing concerns about weaknesses in the city’s system for holding officers accountable. Those weaknesses were largely borne out of a new contract between the city and the rank-and-file Seattle Police Officers Guild. Advocates argued that the contract weakened the accountability measures adopted by the city council in 2017 and Robart seemed to agree.

Robart flagged several items within the contract in justifying his finding: a heightened and vague standard of proof for discipline; parameters surrounding the 180-day timeline for imposing discipline that seem to favor officers; and the restricted subpoena powers for the department’s internal affairs office.

Additionally, Robart raised serious concerns over the arbitration process after Officer Shepherd, who was fired for punching the handcuffed woman, was ordered reinstated by an arbitrator last year.

“Getting this aspect of reform right may well be a linchpin to the long-term success of this entire process,” Robart wrote last year.

His decision to find Seattle to be out of compliance was a huge blow to the city and particularly Durkan, who eagerly awaited the previously scheduled conclusion of the agreement — known as a consent decree — at the beginning of 2020. Robart had found the city to be in full compliance with the consent decree in January 2018, which triggered a two-year wind-down period. That wind down was disrupted by his May finding.

Robart, however, did not offer clear direction for addressing his concerns. That vagueness has been the source of much of the tension over how to move forward.

In its Thursday filing, the city proposed finishing the assessment of the accountability system by the end of November.

Robart will likely call a status conference to weigh in on the city’s proposed plan for moving forward.

Update, 4:45 pm: On Friday, King County Superior Court Judge John McHale overturned the arbitrator's reinstatement of Officer Shepherd. McHale acknowledge his decision was an "extraordinary" step for him take, but that the Seattle Police Department's own policy supported it.

"Allowing this imposed discipline to stand, which includes the reinstatement of Officer Shepherd, sends a message to law enforcement officers and to the public that the use of excessive force on handcuffed or restrained persons is allowed in suituations when officer patience is stretched thin," McHale wrote.

"We understood that Judge Robart had deep concerns about this case," Durkan and City Attorney Pete Holmes said in a statement. "We shared those concerns about how this incident deeply impacted public confidence, which is why we pursued the appeal.... Judge McHale rightly recognized the arbitrator's order for Mr. Shepherd’s reinstatement violated the public policy against excessive use of force in policing. SPD should not be forced to employ an officer whose view of reasonable and necessary force is so immutable and so contrary to SPD’s policies and values."