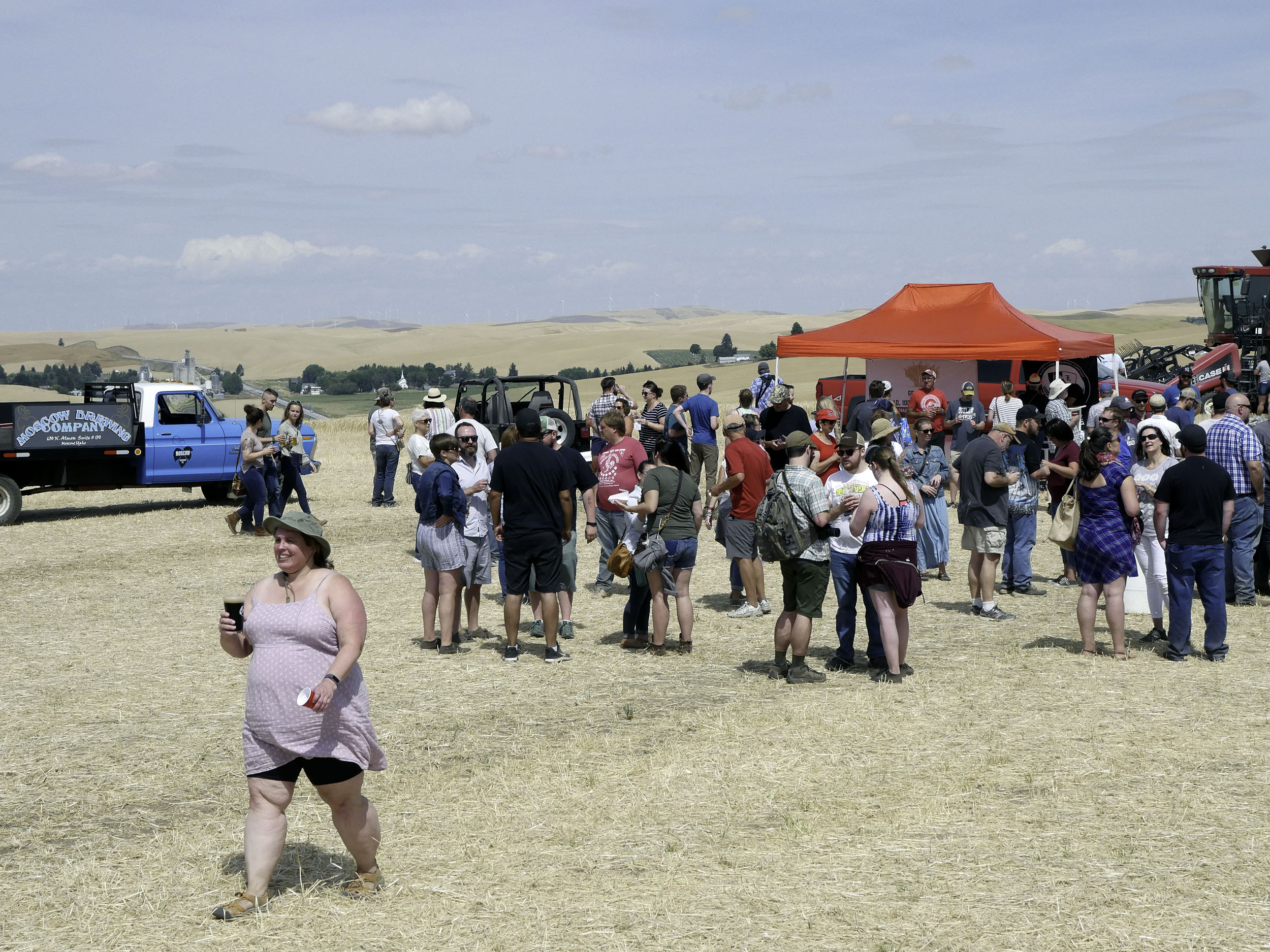 At noon, Jim Larsen is usually sweating in the field, driving a tractor through 200 acres of Baronesse barley in the Palouse. Today, he is once again surrounded by rolling waves of grain, but instead of farming, he’s drinking a beer with 300-or-so barley enthusiasts.

While love for a grain seems a stretch for anyone but a farmer, those gathered to swill beer with Larsen shared his passion.

A cover band plays from a flatbed trailer. Homebrewers peddle their creations to judges in a brewing competition. Several breweries using the Baronesse barley pour for the crowd.

Although most wouldn’t know it, maltster Joel Williamson is a star of the show.

Without him, Baronesse barley grown in the Palouse would be trucked straight to the grain elevator and sold on the commodities market, winding up anywhere in the world. Instead, Williamson helps keep that barley in the Northwest. The barley ends up in a variety of beers, from pale ales to Pilsners.

“I can raise anything else that anybody does and get lost in the crowd, or we can do this,” Myers said. “This barley deserves it.”

As a maltster, Williamson first steeps the grains in large tanks for a day or two. He then transfers the soaked grain to a second tank to germinate for four to five days. Finally, he kilns the barley, using heat to halt germination while adding color and flavor.

Williamson malts grains from local farmers like Myers and distributes that to local craft brewers and distillers through a system developed by LINC Malt, an offshoot of the co-op LINC Foods.

Co-founded by Williamson and Beth Robinette, LINC Foods brings farm-to-table foods to universities, hospitals, hotels and other large businesses in the Spokane area. Now, he’s doing the same for beer.

Williamson watched as craft brewing exploded in popularity, but when he looked at the supply chain he saw only a few big companies making malt for all the breweries. There are no classes, certifications or apprenticeships in the United States in malting, and few books available. So he went to the Canadian Malting Barley Technical Centre in Manitoba for a two-week crash course in malting. The rest was trial and error.

As Williamson sees it, people have long cared about supporting craft breweries, but consumers have been slower to dig into the ingredients behind beer.

“I think they care where the beer came from at the brewery level. We love our neighborhood craft breweries,” he said. “But where do their ingredients come from? I think that awareness, while it’s not there yet, will come.”

Now the malt he sells to breweries and distilleries can be traced to the farmer. Brewers can meet the grain grower, much like what happens at the festival.

“In a big, large-scale malting industry, you can’t do that,” Williamson said. “Because it's all aggregated, it's kind of ubiquitous and everything's anonymous. So we're giving that transparency of sourcing.”

One of those sources are the Wahls. James and Rena Wahl, whose family farm lies near Lind, have been with LINC Malt for four years. They’ve been thrilled to move from strictly growing commodity grains to now growing a portion for malting. It’s not only about the additional income, but being connected to their products.

“I always wanted to get to a point where I know my end user instead of just sending it down the river,” James Wahl said. “This comes down to recession-proofing your farm and trying to give the generations after me a better shot at sustaining a farm.”

Thanks to the co-op, James Wahl said, he and Rena have become very close friends with his customers. They and Myers go to breweries that use their malt to talk to brewers and drinkers. It’s a rare experience for a farmer.

“It really is a relationship. The consumer digs the idea,” Rena Wahl said. “The farm-to-table movement has been happening for a while and it’s moving into the beer industry.”

She said she has seen a complete generational shift, but one that’s worth it.

“By stepping out and doing something a little bit different, that’s a risk,” she said at the Colfax festival. “It takes some nerve. Your neighbors are like, what are you doing? But for us, there’s some gratification.

“We get to do this, we get to be here, we get to see the people who are using our grain, developing some relationships that we never would have otherwise. That’s kind of a dream.”

Growing from a dozen attendees four years ago, the festival now draws hundreds of alcohol makers and drinkers interested to see where the ingredients come from.

“They love it. We love it and their patronage,” Myers said. “It’s just a big private party with about 400 of our closest friends.”

Joseph’s Grainery was one of the first farms to work with LINC Malt, back when they started malting in the spring of 2016. Before that, Myers was selling flour in regional grocery stores and online. When Williamson approached the family about transitioning to malt grains, the crop was a natural fit.

“It’s a lot of effort to sell a 2-pound bag of flour, to get that space on grocery store shelves,” Collins said. “It turns out it’s about the same effort to sell two tons of grains for malting for brewing and distilling.”

Dan Dvorak is the co-founder of Black Label Brewing Co. in Spokane. They’ve used LINC Malt since 2016, and now 16 of their 18 beers use LINC malt.

Joel approached Black Label asking if they’d be interested in using locally malted grains from the region. Dvorak said they’ve always focused on local and organic ingredients so working with them matched with their personal beliefs.

Brian Estes, partnerships coordinator at LINC, said craft scale malting is only about a decade old. When it opened four years ago, LINC Malt was among the first 10 or 15 craft malt houses to get into the business in the United States, Estes said. There are now about 80.

Myers said transitioning to the co-op has paid off in myriad ways. While he said he enjoys the business, he finds the farmer-brewer-consumer connections rewarding.

“We just had an awful lot of fun doing this,” Myers said. “One of the signature things about us, we work awful hard at this, but we have fun. If you’re not having fun, you better find something else to do.”