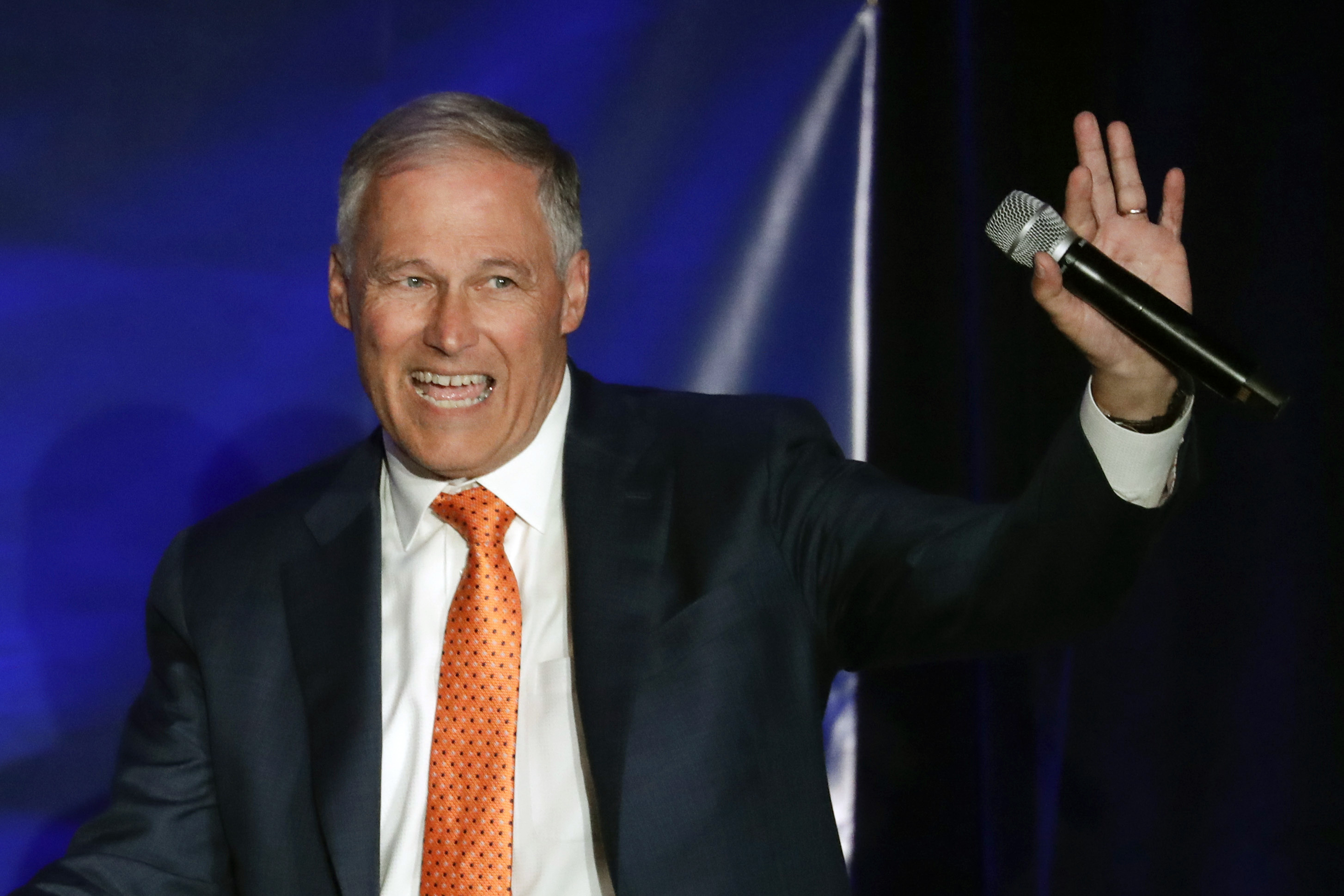 Washington Gov. Jay Inslee waves after speaking at an event in Pasadena, Calif., on Friday, May 31, 2019, during his now-ended presidential run. (Photo by Chris Carlson/AP)

Washington Gov. Jay Inslee suspended his presidential campaign Wednesday night. Now, the Democrat is planning to run for a third term as governor, he announced in an email to supporters Thursday morning.

"It has been a profound honor to represent our state on the national stage in the presidential race," Inslee wrote in his email, which went out a little after 9 a.m. Thursday.

"I want to continue to stand with you in opposing Donald Trump and rejecting his hurtful and divisive agenda, while strengthening and enhancing Washington state's role as a progressive beacon for the nation ... Which is why I'm announcing today my intention to run for a third term as Washington's governor."

Shortly after Inslee dropped out of the presidential race Wednesday, two sources close to the governor told  The Associated Press, and later Crosscut, about Inslee's plan to seek re-election. But he had yet to make the announcement official.

Inslee, who was elected governor in 2012 after several terms in the U.S. House of Representatives, announced in March he would run for president with a platform focused on tackling climate change. Since launching his campaign, Inslee has released detailed policy proposals that have drawn praise from activists, as well as generating some favorable coverage in the national media.

But Inslee’s presidential campaign failed to get off the ground with members of the public. While his campaign was able to attract 130,000 individual donors, one of the requirements set by the Democratic National Committee for participating in the next round of televised debates, Inslee was unable to make a dent in the polls, another requirement for participation. Inslee would have needed to hit 2% support in four separate polls to qualify.

In an email to supporters Wednesday night, Inslee said “it became clear that we would not meet the DNC's polling threshold, thus we would not have been invited to the fall debates.”

“As a result, I don't believe we can compete for the attention and exposure needed to have a reasonable shot at the nomination,” Inslee’s email said. The governor initially announced he was dropping out of the race on MSNBC’s Rachel Maddow Show.

Throughout his presidential campaign, it was unclear whether Inslee would choose to seek a third term as governor if he failed to secure the presidential nomination. Three other Democrats holding elected office in the state — Attorney General Bob Ferguson, Public Lands Commissioner Hilary Franz and King County Executive Dow Constantine — said they were interested in running for governor of Washington if Inslee didn’t seek re-election.

In turn, several Democratic candidates were lining up as potential successors to Ferguson and Franz, with the caveat that they wouldn’t run if the incumbents decided to seek re-election to their current positions. In recent months, Seattle City Councilwoman Lorena González, state Rep. Drew Hansen and state Solicitor General Noah Purcell all launched fundraising committees to begin campaigning for attorney general.

Yet, with Inslee planning to run for re-election, all of those plans could come screeching to a halt. In an interview with Crosscut earlier this month, Ferguson said he would not challenge Inslee for governor, but instead planned to run for a third term as attorney general if Inslee decided to seek a third term.

Ferguson said he would be happy to stay in his current position. “I really enjoy my work,” he said.

That could mean there won’t be as much down-ballot shuffling in advance of the 2020 election.

State Sen. Christine Rolfes, a Democrat from Bainbridge Island who recently launched a campaign committee with an eye toward Franz’ position, said she wouldn’t run for public lands commissioner unless Franz was leaving the job. Reached by text message Wednesday night, Rolfes said she hadn’t heard details yet about what Franz plans to do.

“Presumably Hilary is not running against him [Inslee] and will be running to retain her seat,” Rolfes said. “If so, I’ll be hoping to retain mine.”

Purcell, the state solicitor general who has been raising money to run for attorney general, said he, too, would be satisfied with keeping his current job if Ferguson runs for re-election. Purcell works under Ferguson in the state attorney general's office.

"I will be happy to remain in my current role and keep fighting for the people of Washington in that capacity," Purcell said.

The state Republican Party was highly critical of Inslee's decision to seek a third term. In a prepared statement, state GOP Chairman Caleb Heimlich bashed the governor for the extra money spent on his security detail during the presidential campaign.

"Inslee has spent most of 2019 out-of-state, campaigning for a different job while forcing taxpayers to subsidize his vanity run to the tune of $2 million," Heimlich said in a prepared statement. "We deserve a governor who wants the job."

Heimlich also criticized Inslee for his handling of traffic problems, homelessness and the state's mental health system. Under Inslee's watch, the state's largest psychiatric facility, Western State Hospital in Lakewood, failed multiple federal inspections, causing the U.S. Centers for Medicare and Medicaid Services to pull the hospital's certification. That has meant the loss of more than $50 million per year in federal funding.

Some Republican candidates have already stepped forward to say they will run for governor in 2020. The most well-known are state Sen. Phil Fortunato of Auburn and Loren Culp, the police chief in the city of Republic.

The state Democratic Party, meanwhile, praised Inslee for his leadership as he announced his bid for a third term. Tina Podlodowksi, who chairs the Washington State Democrats, said in a statement that Inslee has overseen a booming statewide economy, along with progress toward "creating a more just and equitable society."

"I'm confident the Governor will win reelection and look forward to the progress we'll make in Olympia under his administration," Podlodowski's statement said.