Jobs or housing: Four ideas for the future of Interbay's armory

With the National Guard moving out, a desirable 25-acre site could host housing, industrial manufacturing or maybe both. 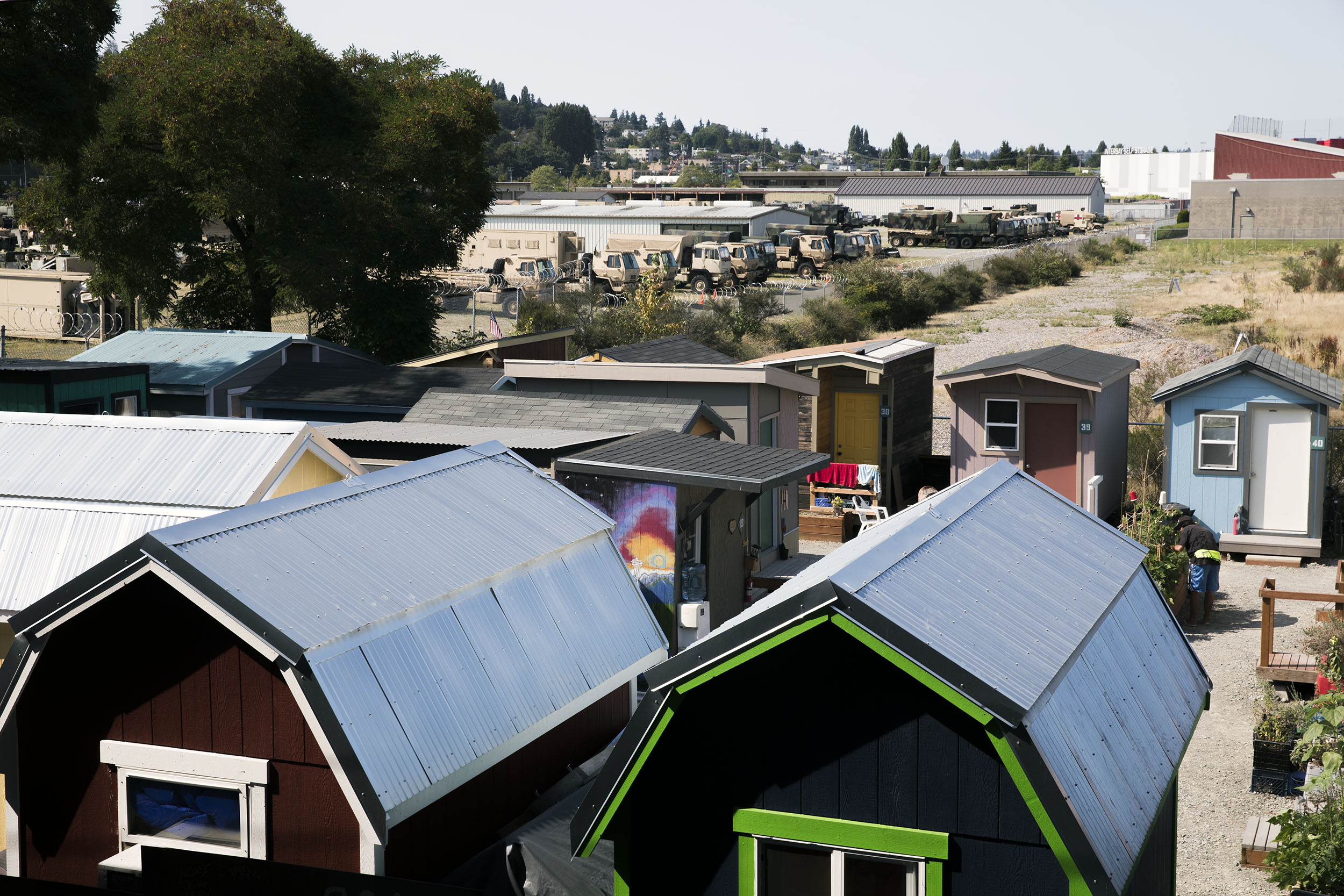 Tucked between the Magnolia Bridge, the BNSF railroad and the Whole Foods in Interbay, there’s a 25-acre Army National Guard armory and readiness center. The National Guard stores trucks and equipment on site and uses the space for training personnel. But the 45-year-old facility no longer meets their needs: The building is too small, the property doesn’t have enough space for outdoor training exercises and the lone entry and exit point is so narrow that newer, larger military vehicles struggle to turn into and out of the site. And, like everyone else, the National Guard is hampered by Seattle’s terrible traffic, which could be disastrous should vehicle convoys need to be deployed in an emergency.

The National Guard is looking for a new home and, when it goes, it will leave behind 25 precious acres of developable land. The fight over what to build in its stead is already brewing. Housing advocates are pushing for new, affordable housing units. Market rate developers would be thrilled to build a mix of housing, commercial space or retail on the valuable land. The armory site is zoned for industrial use, and representatives from Seattle’s manufacturing, marine and industrial sectors will fight hard to keep it that way.

It’s ultimately up to the Washington Legislature to decide what to do with the state-owned parcel. To help legislators decide, the state Department of Commerce convened an advisory group of representatives from the Legislature, the Port of Seattle, the National Guard and affordable housing advocates. On Wednesday evening, the Commerce Department held an open house at the Ballard VFW to share updates about the project and take public comment.

Consultants hired by the state presented four leading concepts for what redevelopment could look like, based on the feedback they have received since March, when they held their first Interbay open house. Sean Ardussi, Commerce’s Interbay project manager, was quick to point out the details will certainly change and that the concepts are meant to give people an idea of just what is feasible.

Having 25 acres to work with is enough space for a pretty major development. For comparison, it’s about a third the size of the 74-acre Seattle Center.

The first idea, dubbed the “Towers and Circles” concept, would feature over 3,200 units of housing spread across six high-rise towers and a dozen midrise buildings. As many as 1,300 units could be subsidized for low-income housing, with a few hundred units dedicated to middle-income “workforce housing” and a couple thousand more occupied by market-rate apartments. It would have about 4 acres of public open space.

A second housing-centric idea is to build a “Pedestrian Village” with 1,900 units of housing in midrise buildings with 102,000 square feet of commercial space, 160,000 square feet of government office space and 5.5 acres of public open space. The housing could be divided evenly between subsidized affordable units and market-rate apartments.

The third concept would keep the property zoned for industry. The consultants estimate the site could host 415,000 square feet of light industrial space that would support up to 920 jobs. That plan would also offer a few acres for public open space and 64,000 square feet of government office space, but no housing of any kind.

The Commerce Department's Ardussi said including  subsidized affordable housing in all the residential concepts was a direct response to significant public input that the site should be used to address Seattle’s affordable housing shortage.

In some ways, the location is ideal for housing. Sound Transit plans to build a light rail station just south of the site as part of its third phase of expansion. Expedia’s new campus will bring thousands of workers to Interbay this fall. Rapid Ride bus service runs on 15th Avenue, near the armory.

But housing advocates have raised several issues with building on the armory site. “We’ve also heard from advocates who worry it’s not the best location for [affordable housing],” said Ardussi. “There’s pollution, noise and other environmental justice issues that come with putting low-income communities in that location.”

The BNSF railroad, which runs right along the armory, is active 24 hours a day, causing noise and air pollution. There are leftover environmental hazards, such as contaminated soil from the site’s history as a Navy depot. The low-lying area is in a tsunami inundation zone. And because the waters of Smith Cove used to extend north to Dravus Street, much of Interbay is built on dirt fill, putting the area at risk of liquefaction during an earthquake.

“We don’t think it’s a hospitable environment for housing,” said Eugene Wasserman, head of the North Industrial Association, which represents many of Ballard’s marine and manufacturing companies. “Industry provides a whole lot of blue-collar jobs and a lot of tax revenue for the city. We’re concerned if it was housing, people will move in and complain about the train.”

“We could have 21st century jobs, such as clean tech or robotics manufacturing,” Kane said. “You want to keep industrial protected. Once you open the door to zoning changes, it’s hard to stop them.”

Though Seattle officials have limited authority to decide what happens with the Interbay armory, its fate remains part of a broader, decadeslong conversation about the future of industry in Ballard, Interbay, SoDo and the Duwamish River industrial area. Mayor Jenny Durkan recently reignited the conversation with a new industrial lands advisory group. In a letter to the Seattle City Council, Durkan said she launched the group to protect “industrial lands and the diverse family-wage jobs that are supported by them.”

According to the mayor’s letter, Seattle’s industrial zones support 106,000 jobs, accounting for about 18% of the city’s total employment. More than 67% of those jobs require only a high school diploma. The report found average annual earnings for maritime industry workers exceeded $100,000.

But Seattle’s rapid growth puts pressure on industrial zones. “With so many people coming to Seattle, it’s hard to defend these industrial areas,” said Wasserman. “Residential and commercial are worth more [to developers].”

Architect Rick Mohler is a University of Washington College of Built Environments professor and member of the Seattle Planning Commission. “Industrial manufacturing provides a lot of high paying, noncollege jobs,” he said. “It’s a really important thing for us to protect. But we also need housing.”

Mohler thinks it’s time for Seattle to seriously consider hybrid industrial and residential zones. He’s leading a graduate course at the UW this fall in which students will investigate ways to execute a hybrid model at the Interbay site.

“The goal of the studio is to figure out how to stop segregating the [zoning] uses in Seattle,” he said. “Interbay is an incredible opportunity and one of the last ‘blank slate’ opportunities we have in Seattle.”

The Interbay advisory committee aims to have final recommendations ready for the Department of Commerce by November. If that happens on time, the Legislature will likely take up the issue in the 2020 legislative session next winter. According to Ardussi, if all the stars align, the site would be ready for redevelopment in 2027.