State Rep. Matt Shea has come under fire for his ties to far-right groups. But history shows how rare — and politically difficult — it can be to expel an elected lawmaker. 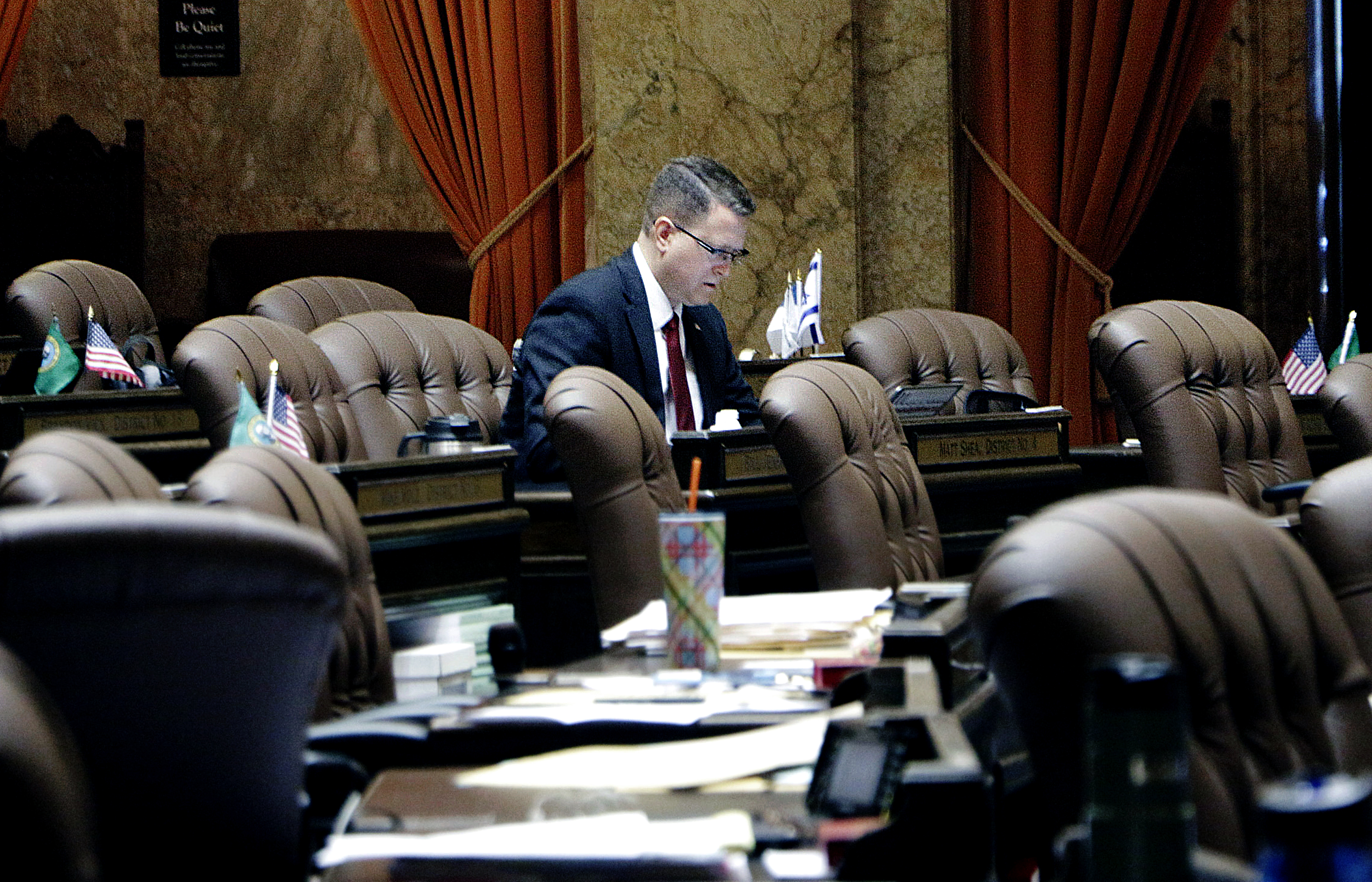 Republican state Rep. Matt Shea sits at his desk on the House floor in Olympia in April 2019. (Photo by Rachel La Corte/AP)

Lawmakers and members of the public in Washington state are looking for answers when it comes to state Rep. Matt Shea. The Republican from Spokane Valley is now the subject of an independent investigation into whether he “has engaged in, planned, or promoted political violence against groups or individuals,” according to a contract the state House finalized last month.

Recent reports that Shea has aided a group that trains young men for “biblical warfare” and has taken steps to track and compile dossiers on progressive leaders have added fuel to the fire, causing more critics to call for Shea’s resignation.

Yet, if Shea opts not to resign, removing him from the Legislature could be difficult,  regardless of what the House’s investigation turns up.

A review of legislative history shows that state lawmakers have voted to expel one of their colleagues from the Legislature only once before, though they have tried and failed to do so on other occasions.

The sole time lawmakers successfully voted to remove someone from the Legislature was after a House member had been tried and convicted of statutory rape. In that 1933 case, Rep. Nelson Robinson was found guilty of having sex with a 12-year-old girl, but was subsequently pardoned by the governor. Members of the House later ignored the pardon and removed Robinson from the chamber.

Shea, a far-right conservative, so far has not been charged or convicted of any crime tied to the recent allegations against him.

In addition to gauging whether Shea was directly involved in violent or threatening activity, the House’s investigation is intended to identify the extent of Shea’s involvement with groups linked to political violence, as well as what kind of threat those groups pose.

House Minority Leader J.T. Wilcox, R-Yelm, said he is waiting to see the results of the investigation before commenting specifically on matters concerning Shea.

He added that, in preparation for questions about the matter, he has asked House attorneys to look at the rules and requirements for expulsion, a process defined in the state Constitution.

“I think it is important to let the investigation take its course, without prejudicing it in any way,” Wilcox said this week.

Wilcox emphasized that the investigation is limited to discerning whether Shea was connected to violence or violent threats, not evaluating the validity of Shea’s beliefs. According to reporting by independent journalist Leah Sottile, Shea has ties to key members of the Christian Identity movement, a white supremacist ideology. Additionally, according to The Spokesman-Review, Shea admitted to distributing a document titled “Biblical Basis for War,” which included language about killing people who defy biblical laws. Shea, who didn’t respond to a request for comment for this article, said at the time that the document was taken out of context.

Removing Shea from office would require a two-thirds majority vote in the House. Yet several times in the past, Washington lawmakers have been unable to generate the required votes to oust an elected senator or representative — even when that person’s behavior involved violence that was directly observed.

Notably, in 1935, a lawmaker who permanently injured someone in the House chamber was not expelled from the Legislature. That year, then-Rep. Myron Titus became enraged over a measure in the House. He was taken away by the House’s sergeant-of-arms, but later returned and resisted when he again was ordered to leave. In the process, Titus “kicked and seriously injured an assistant Sgt-at-Arms who ended up in the hospital partially paralyzed,” wrote Don Brazier in The History of the Washington Legislature, 1854-1963.

“Most writers concluded that the conduct of Representative Titus was affected by strong drink,” Brazier wrote.

An attempt to expel Titus over his behavior failed.

Territorial days involved their own brand of bad behavior. In 1869, before the approval of the Washington State Constitution, a legislator picked up a glass and threw it at another lawmaker, hitting him in the face. While there were calls for both members to be expelled, ultimately, they were allowed to publicly apologize and avoid being kicked out.

In the late 19th century, allegations of bribery were similarly not enough to prompt a lawmaker’s removal. Back then, state lawmakers had the task of choosing U.S. senators. An investigative committee concluded that Rep. John Metcalf took a bribe that was an attempt to sway his vote for the Senate seat. That $500 bribe would amount to more than $13,000 in today’s currency, according to the Bureau of Labor Statistics’ inflation calculator. Although Metcalf was censured, a move to expel him failed by a vote of 41-33, according to Brazier’s account. (In the end, the candidate Metcalf was being bribed to support wasn’t elected to the U.S. Senate.)

For its part, the Washington state Senate has never expelled one of its members, according to staff in the Senate secretary’s office.

A vote to expel a lawmaker doesn’t just ban a lawmaker from the Capitol or the chamber, but removes them from their seat and creates a vacancy that must be filled, according to legislative staff.

Hugh Spitzer, a University of Washington law professor, said the Washington Constitution purposefully makes it difficult for lawmakers to get rid of their fellow legislators. Requiring a two-thirds vote to expel a legislator means that Democrats, even with their strong majority of 57-41 in the state House, couldn’t remove Shea without Republican support.

“The state constitution has about a dozen provisions that call for supermajority votes for one thing or another," Spitzer said. "They’re all there to ensure that, on things that are extra important, that actions can’t be taken by the whims of a majority or perhaps just by one political party."

Even if the supermajority requirement wasn’t there, though, Spitzer said, “Lawmakers will be very cautious about expelling or excluding an elected member just because they don’t like his or her views.”

“Because then, they have to answer to the voters,” he said.

Shea has been reelected every two years since he first won his seat in 2008. During his last election, in November 2018, he won 58% of the vote in the 4th Legislative District, which extends east of Spokane to the Idaho border.

Wilcox, the House minority leader, said in his view, Washington’s constitution pays “great deference toward the will of voters.” He noted that the constitution states a lawmaker cannot be expelled twice for the same offense — implying that, if voters choose to reelect that person after they are kicked out, the voters’ decision is allowed to stand.

There are a few exceptions, of course. Being convicted of a felony and sentenced to prison can make someone unqualified for elected office in Washington state (unless the person is swiftly pardoned, as Robinson was).

However, the investigation of Shea now underway in the House is being conducted by private investigators, not law enforcement.

House leaders originally called for the investigation in early May, shortly after The Guardian reported that Shea was included in group chats that discussed carrying out surveillance and acts of violence against members of left-leaning groups. During those chats, Shea had offered to conduct background checks on political opponents, according to The Guardian.

The firm conducting the investigation, Rampart Group, is expected to complete its preliminary report by Sept. 30, and submit a final report by Dec. 1.

Through a spokesperson, House Democratic leaders declined to comment for this article. Acting House Speaker John Lovick, as well as state Rep. Laurie Jinkins, who is poised to become the next House speaker, said they wanted to wait until the Shea investigation was complete before making any public comments.

Short of kicking someone out of the chamber, the House has other options for disciplining Shea, should members choose to go that route.

Legislative leaders have been known to ban lawmakers from caucus meetings or restrict them from interacting with staff as alternative forms of discipline. Such sanctions normally have followed allegations of misbehavior toward legislative employees. For instance, former state Sen. Pam Roach, now a Pierce County Council member from Sumner, was banned from Senate majority caucus meetings from 2010 to 2012 after several confrontations with staffers. Roach was also banned from having contact from Senate staff for several years.

Given the difficulty and rarity of expelling a lawmaker from office, those facing intense criticism are often pressured to resign instead. In January, former state Rep. Matt Manweller, R-Ellensburg, resigned following allegations he behaved inappropriately with women. Former state Sen. Kevin Ranker, D-Orcas Island, also resigned in January while he was under investigation for harassing a female staffer, an allegation that was later upheld.

In 2016, former state Rep. Graham Hunt resigned amid accusations he exaggerated his military record and lied about serving in the Marines and being wounded in combat.

So far, Shea has not shown any intention of resigning, despite calls for him to do so from Spokane-area officials, as well as from groups such as the Spokane Police Guild and Spokane chapter of the NAACP.

The House and Senate also have the ability to refuse to seat a lawmaker after an election. With Shea, however, that wouldn’t be an option in the near term, since he isn’t up for reelection until November 2020 and wouldn’t begin a new term until the following January.

‘A new lifestyle': How two refugees are adapting to WA state