Despite its homelessness "state of emergency," King County no longer qualifies for a federal grant used by local shelters and food banks. 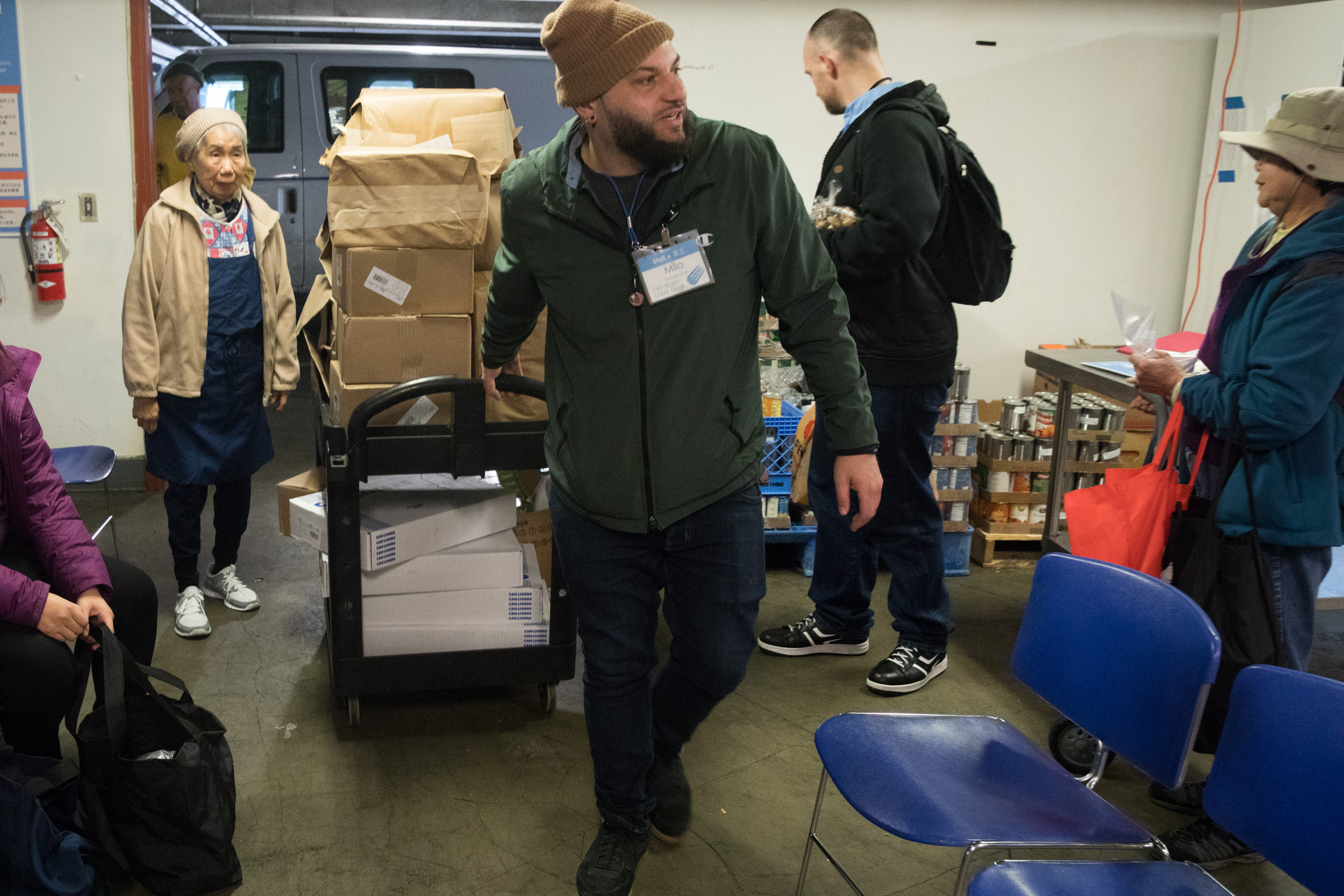 Milo, a driver for the Pike Market Food Bank, arrives with goods he has picked up from various grocery stores in downtown Seattle. King County lost FEMA funding that supports Pike Food Bank and others like it in the region. (Photo by Matt M. McKnight/Crosscut)

The tech-fueled expansion has built a massive amount of wealth for some, and widened the gap between the area’s haves and have-nots. Average wages are up, but so is the cost of living for countless workers struggling to make rent or put food on the table. Unemployment is down, even as at least 11,200 residents find themselves homeless.

And now the county’s growth is actually making it harder for service providers to help people straining under the weight of a more expensive region.

Each year for nearly three decades, King County has received funding from the Federal Emergency Management Agency that helps pay for homeless shelters, food banks and rental assistance. Funding from the Emergency Food and Shelter Program is distributed to counties based on their poverty and unemployment rates. In early August, shelter and food bank providers in this region learned that, for the first time since 1991, they would not be receiving money from FEMA because King County’s poverty and unemployment rates had dipped below the program’s threshold.

The Emergency Food and Shelter Program funding is available to counties with a minimum 4.9% unemployment rate and 15.6% poverty rate. King County’s unemployment rate is 3.4%, and 9.3% of residents live below the poverty line — currently defined as $25,750 a year for a family of four.

“King County statistics may illustrate that the county is doing too well to need these funds, but we all know that that’s not actually true,” said Linda Nageotte, president of Food Lifeline, a nonprofit that received funding from the program in the past. “The real issue is that the income gap is continuing to widen and those statistics are being artificially propped up by a higher number of high wage earners.”

In years past, King County’s grants from the program have ranged from $400,000 to about $2.5 million annually. Local service providers were counting on at least as much as last year’s award of $810,000. Last year, funds went to 20 organizations, split roughly 50-50 between homeless shelters and food banks.

“They’re not huge awards to any one organization, but they are dollars that are putting the most basic needs in front of people that need it most,” said Lauren McGowan, a senior director at United Way of King County, which disburses the FEMA funding to local organizations. “There’s no question that any loss of funding, whether on the food side or shelter and rental assistance side, is going to hurt people. Anytime you take money out of a system that is already completely overwhelmed, it has consequences.”

Shelter providers are scrambling to figure out how to deal with the lost funding. SHARE/WHEEL is a Seattle-based organization that manages 11 small indoor shelters and two sanctioned homeless encampments. Last year, the nonprofit received just over $28,000 through the grant program.

“If we want to continue operations, we’re going to have to find a way to fill that,” said SHARE/WHEEL’s Gary Eyerly, a formerly homeless man who got housing through the nonprofit’s work-exchange program. “There’s no extra money anywhere. … The immediate impact will probably be on our tent cities. Their day-to-day expenses are a little higher than indoor shelters. You wouldn’t believe how much it costs to have a Porta Potty out there getting serviced at the tent cities.”

Food Lifeline supplies Western Washington food banks and was the largest single recipient of the EFSP grant to King County in 2018. Receiving more than $154,000, Food Lifeline has used the funds to buy items for 25 food banks and 30 meal programs in Seattle.

“Because we’re a big food bank distribution center, we leverage our food purchasing power to get the food banks and meal programs the most of whatever they want,” Food Lifeline’s Nageotte said. “Last year, we provided almost 44,000 pounds of product through [the Emergency Food and Shelter Program]. Losing that definitely will be an impact felt by the organizations.”

Because the FEMA money is fairly flexible, Nageotte said it is often used to buy items that food banks and meal programs rarely get as donations, such as nitrile gloves for food preparation, disposable plates and cutlery, cooking oil, infant formula and frozen meat.

United Way’s McGowan said the organization is already in conversation with FEMA to appeal the decision or at least find money to cover the gap. SHARE/WHEEL’s Eyerly said his group wrote letters seeking help from Sens. Patty Murray and Maria Cantwell and U.S. Rep. Pramila Jayapal, whose district includes Seattle.

Longer term, McGowan said United Way will advocate for FEMA to change the way it decides whether a region qualifies for the program.

“We should absolutely be advocating at the national level to say we have an incredible homelessness crisis in this region, and some of these dollars should be used to invest in this community,” McGowan said.

“The reality is we as a community are not funding the needs of people who are homeless and also people who are food insecure at the scale of the problem,” she continued. “Until we increase revenue to do that or prioritize the funding to put into this area, we’re going to continue to have problems. We can’t solve it a local level only. We need to advocate for funding at the local, state, federal level.”

“We’re not going to really get out of these challenges until we figure out the tax code issues,” she said. “I don’t know how many more times we can go back to the voters with sales and property tax requests.”

Macri also works as deputy director for strategy and outreach at the Downtown Emergency Service Center (DESC), a shelter and housing provider in Seattle. Last year DESC received almost $15,000 through the FEMA program.

“DESC will be able to weather a $15,000 reduction in our budget,” Macri said. “The city or county might be able to backfill [King County’s loss of the grant], but every time we backfill we’re not making progress on the problem.”

McGowan said United Way of King County is also planning on fundraising to close the $800,000 gap.

“I wish I could say we were just sitting on a bunch of money we could fill the gap with, but we as an organization are not,” she explained. “But United Way and the broader philanthropic community are going to need to find ways to make sure these services continue. … It shouldn’t be $800,000 that forces these organizations to make really tough decisions.”