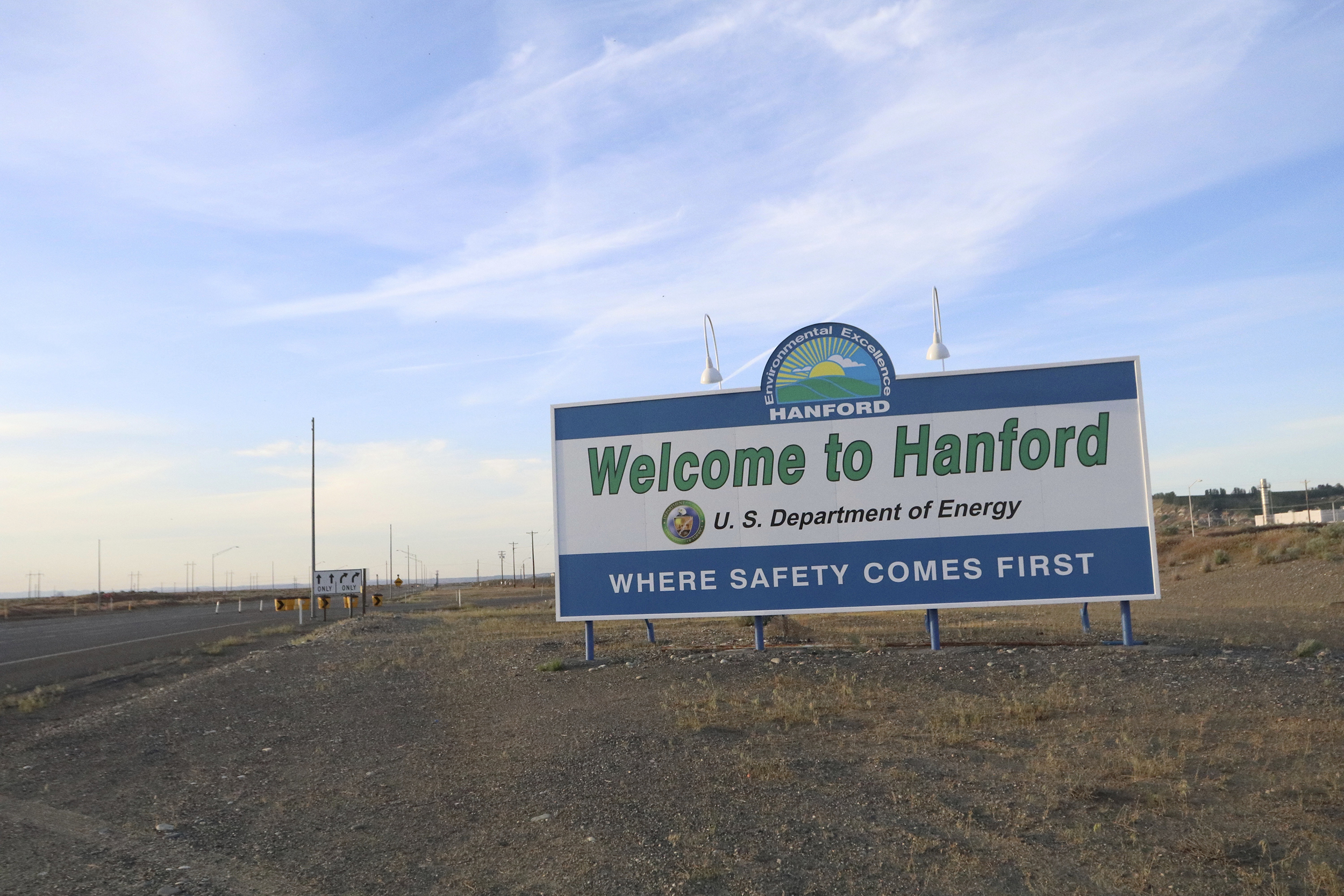 A sign welcomes drivers to Hanford Nuclear Reservation in Richland, Benton County, on May 9, 2017. (Photo by Manuel Valdes/AP)

The job of the industrial hygiene technicians at the Hanford Site in Richland, Benton County, is a matter of life and death. They are the people who run around with air samplers, tracking toxic chemicals that can harm the site’s workers, especially those dealing with dangerous underground tanks full of nuclear wastes in the center of the reservation.

To qualify and requalify for their jobs, these technicians are required by federal law to be tested individually by evaluators, with no coaching during the exams.

But for years that hasn’t been happening. Instead, evaluators have been testing these technicians in groups, allowing them to answer as a group.

This and other practices have led many industrial hygiene technicians to be qualified on paper without going through the required rigor in the exams. So says a federal lawsuit filed by a veteran industrial health technician against Washington River Protection Solutions.

That lawsuit further adds that Washington River Protection, the contractor in charge of taking care of Hanford’s 177 underground tanks, has collected potentially millions of dollars in federal money for training allegedly done sloppily.

However, plaintiff Kevin Newcomb recently withdrew that lawsuit — which just became public three weeks ago — because the U.S. Department of Justice declined to intervene as a plaintiff ally in early July. “Without the DOJ pursuing this, it’s hard to make the case,” said Tom Carpenter, executive director of Hanford Challenge, a nonprofit that has been advising Newcomb and his attorneys on this matter.

Newcomb was an industrial hygiene technician for 23 years at Hanford before resigning in 2017 because of work-related health problems.

Hanford Challenge — a longtime Seattle-based watchdog organization that focuses on Hanford whistleblowers — plans to call for an outside investigation and to put pressure on the U.S. Department of Energy or Congress to take action on the issue.

Hanford has 56 million gallons of highly radioactive fluids, sludges and chunks in 149 leak-prone single-shell tanks and 28 newer and safer double-shell tanks, which are reaching the end of their designed lives. At least 1 million gallons of radioactive fluids have leaked into the ground and are seeping toward the Columbia River. These tanks are gathered in 18 clumps — dubbed “tank farms” — in the center of the 586-square-mile site north of Richland. The tanks are the most radioactive and chemically toxic collection of wastes in the Western Hemisphere.

Washington River Protection is in charge of keeping the tanks in good shape and moving wastes from the most leak-prone tanks to the safer double-shell tanks.

For the past several years, tank farm workers have been plagued by sporadic exposures to vapors from the tanks. In 2014, an outside inspection team from the South Carolina-based Savannah River National Laboratory linked the fumes from the tanks and the pipes connecting the tanks to respiratory problems at in the tank farms.

The 2014 Savannah River report recommended Washington River Protection and the Department of Energy resolve the vapor exposure problem with measurable benchmarks, overhaul the industrial hygiene technician programs, improve monitoring equipment and procedures, communicate better inside and outside of Hanford on vapor issues and conduct more research on the matter.

“WRPS’s claims for fees necessarily must have misrepresented the qualifications of its industrial hygiene staff to receive the ‘very good’ rating for safety program implementation that it received in 2014, 2015 and 2016 despite the widespread training and qualification deficiencies among the IHTs who are critical to worker health and safety in the tank farms,” Newcomb’s lawsuit alleged.

Newcomb filed his lawsuit with the U.S. District Court in Eastern Washington in October 2017. The file was sealed — a standard practice — because Newcomb’s attorneys were seeking intervention by the Justice Department. If the department intervened in this type of case, Newcomb would have been eligible to receive some of the recovered money under a law that rewards whistleblowers’ efforts to expose government fraud.

In a written statement, Washington River Protection said: “The Department of Justice declined to intervene in this case, and the plaintiff in this matter has since voluntarily dismissed his lawsuit. Washington River Protection Solutions takes employee concerns very seriously. As part of our continuous improvement process, we have addressed chemical vapors-related concerns by implementing robust control measures, comprehensive training practices, and significantly upgrading infrastructure, equipment and monitoring so workers are safe and feel safe.”

Carpenter of Hanford Challenge demanded an independent investigation. “The complaint alleges that years of data have been gathered by unqualified, untrained and uncertified inspectors, rendering this data unreliable, putting workers at risk,” he said. “We need accountability in order to protect the safety and health of the workers performing this hazardous cleanup. … Hanford Challenge is concerned that the Department of Energy accepts an inadequate training and qualification program as good enough.”

Carpenter said Newcomb did not want to talk to the media about the lawsuit.

In addition to contending that new technicians are tested in groups and not individually as required, Newcomb’s lawsuit states that sometimes the proper equipment is unavailable for the tests. And some of the instructors were not qualified to test the technicians, the lawsuit charged.

It also said new technicians frequently received their initial 24 hours of required on-the-job training at one of the 18 tank farms. “This is a crucial failing because tank farm hazards vary from farm to farm. That an IHT has 24 hours of [on-the-job training] in one tank farm does not and cannot qualify them to provide for worker health and safety in another tank farm,” Newcomb’s lawsuit alleged.

Later the lawsuit said: “Accordingly, newer IHTs lack the requisite [on-the-job training] to work other assignments at other locations, and IHTs are unfamiliar with some of the tank farms. Despite this, WRPS assigns these IHTs to locations to which they were not oriented and makes them responsible for responding to emergency events such as spills and vapor incidents. This is a crucial failing because tank farm hazards vary from farm to farm.”

Correction: An earlier version of this story stated that industrial hygiene technicians handle radiological matters. Health physicists are the employees who handle radiation health issues, and were not addressed in the lawsuit. The story has been corrected.