On the heels of Illinois' ban on private facilities used by ICE, Washington activists are putting on the pressure. 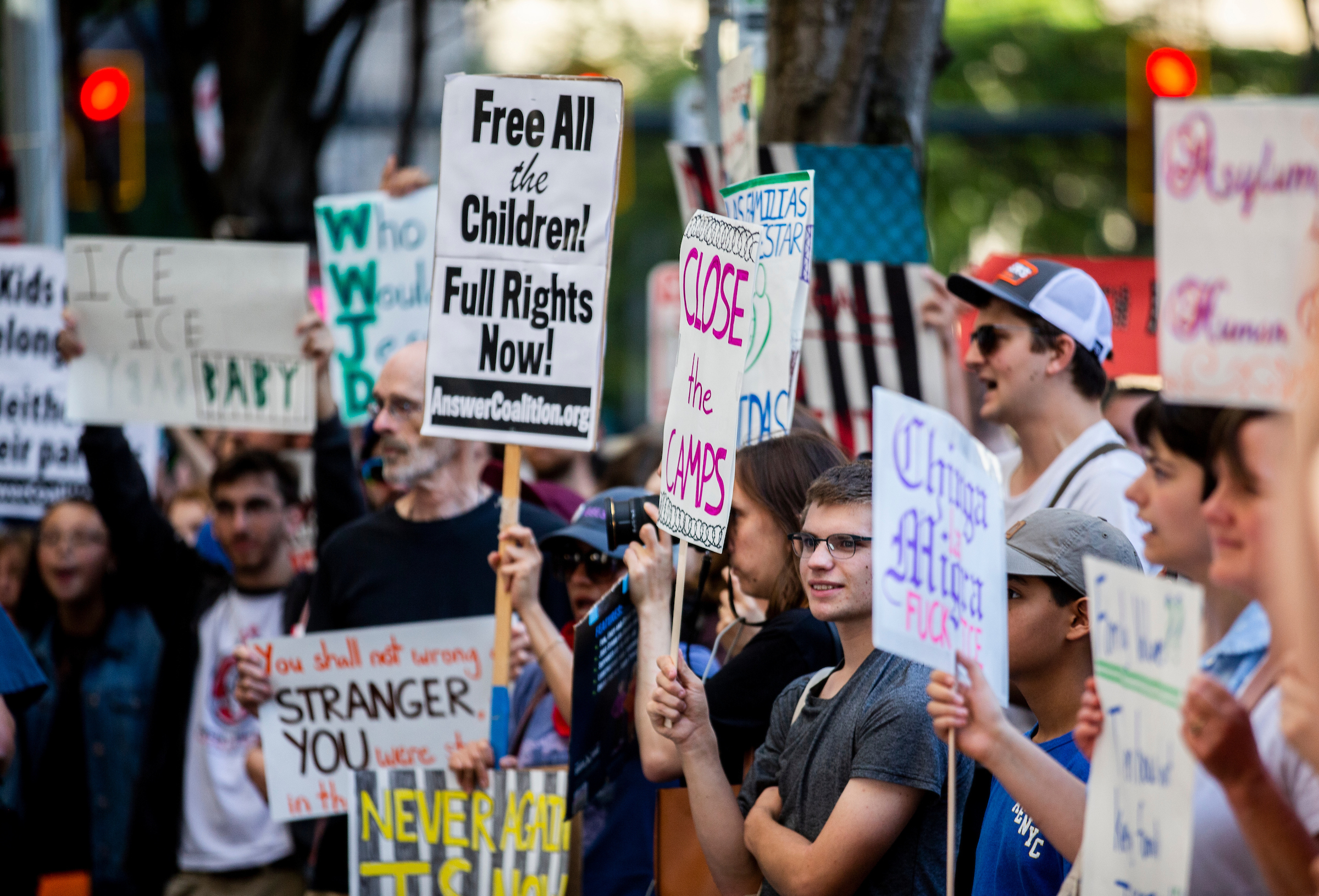 Hundreds of people chant and hold signs during a rally calling for a ban of private immigration detention centers outside of Washington ICE headquarters in downtown Seattle on Thursday, Aug. 1, 2019. The Northwest Detention Center in Tacoma is privately run by the GEO Group on behalf of ICE. (Photo by Lindsey Wasson)

For the second time in recent weeks, dozens, possibly hundreds, of protesters will gather in front of the U.S. Immigration and Customs Enforcement office in downtown Seattle on Thursday. This time members of the Jewish community, a new arm of the movement against ICE, will be present.

“Everybody knows ‘never again.’ We always say that,” said Diana Falchuk, a local organizer of Never Again Action, a burgeoning, Jewish-led campaign aimed at shutting down ICE across the country. “This is a never again moment.”

“We are going to be in solidarity with, and really get behind, these immigrants,” Falchuk said.

The planned protest in front of the ICE office is the latest push to slow down and, some advocates hope, eventually dismantle the federal agency dedicated to immigration law enforcement. Last month, for example, approximately 1,000 Jews, immigrants and activists protested outside ICE headquarters in Washington, D.C., effectively shutting down that office for several hours.

In a statement, Tanya Roman, a spokesperson for ICE in the Pacific Northwest said the agency “fully respects the constitutional rights of all people to peacefully express their opinions. That being said, ICE remains committed to performing its immigration enforcement mission consistent with federal law and agency policy.”

“In response to recent protests, ICE has taken additional security measures to ensure employee safety and the security of all offices. ICE operations across the country have and will continue to proceed as normal despite these events,” Roman said.

Amid growing concerns over conditions at detention centers, particularly on the border, some advocates are also calling specifically for the banning of private immigration detention facilities.

Several presidential candidates, including Sens. Elizabeth Warren, Bernie Sanders and Kamala Harris, are vowing to make the phaseout of private immigration detention centers and prisons part of their campaigns. Warren, for example, has suggested withholding funding from states and localities until they agree to cooperate with a ban on private prisons.

In Seattle, a recent protest in front of the ICE office downtown focused on banning private immigration detention facilities in Washington state.

This push was inspired by Illinois Gov. Jay Robert “J. B.” Pritzker's recent signing of legislation that bars private companies from contracting with local communities to detain immigrants. Illinois is the first state in the country to pass such a law.

The goal of the legislation, signed in June, was to prevent the construction of a 1,300-bed facility in Dwight, Illinois, a small town roughly 80 miles southwest of Chicago. Immigration Centers of America, or ICA, the private prison company that attempted to open the facility, has also been defeated in two other locations: in Michigan, where the governor vetoed its proposal, and in Wisconsin, where the town of New Richmond said the proposal for a 500-bed facility didn’t fit with the city’s long-term plan.

Fred Tsao, senior policy counsel with the Illinois Coalition for Immigrant and Refugee Rights, said his organization was instrumental in getting the legislation passed. Although Illinois is one of three states in the country to have banned private prisons (New York and Iowa are the other two), civil detention facilities are still fair play.

Tsao said he has been fighting the expansion of ICE detention facilities for approximately eight years, but that the so-called Democratic blue wave that had hit the state House and Senate last election cycle had made it much easier to get such a law passed.

Tsao acknowledged it is more feasible to prevent future facilities from being constructed than shutting down immigration detention centers already in operation. In addition, Tsao said, ICE still contracts with several county jails in Illinois.

But, Tsao argued, “the tide is turning.”

“Things are starting to change and that is a very hopeful sign,” he said, referring to immigration detention facilities.

“We overuse detention because we don’t trust people,” Tsao said. “I would point to letting people out. I would point to not detaining them, period,” he continued, while noting that the more “humane” options also happen to be more cost effective: using ankle bracelets, for example, for monitoring or allowing immigrants to continually check in throughout their court proceedings.

But Lauren-Brooke “L.B.” Eisen, a senior fellow and acting director at the Brennan Center for Justice at the New York University School of Law, said even the Illinois legislation isn’t a total ban on private immigration detention facilities because the federal government could, technically, contract directly with private firms, though that would be difficult. Most agreements with private prison firms are three-way contracts that involve the federal government, a local entity and a company such as GEO group, the corporation that runs the Northwest Detention Center in Tacoma.

Eisen also said banning private immigration detention facilities would have limited impact, as 30% to 40% of immigration-holding facilities are government-operated.

“Our government needs better oversight of conditions on the border in its government facilities,” Eisen said. “This is a government crisis at its core.”

“I think a lot of people in Washington state are really fed up,” said Enoka Herat, an attorney with the American Civil Liberties Union of Washington. “They think our state can do better.”

“I think people are hungry for a state solution to abolish” private detention facilities.

In a report last month, the City Manager's Office discussed the possibility of banning the NWDC in Tacoma. The office noted that litigation surrounding the question of whether the NWDC in Tacoma should be considered an essential public facility under Washington state law is pending. That argument began when the city last year blocked GEO Group from expanding the facility. The office also said the federal government could declare the NWDC a federal facility.

With regard to the protest planned for Thursday, Jewish allies say they agree with, and want to work with, advocates who are pushing to ban private immigration detention facilities, but aim to go even further.

“As Jews we need to be very clear and firm about the injustices that we’re witnessing. The idea behind it is a refusal to be complicit in this,” Falchuk said.

“It’s time for us to act on the lessons that we were taught,” she added. Falchuk argued the actions against immigrants are reminiscent of events that forshadowed the Holocaust — rescinded passports; lack of fair trials; negligent medical care.

Falchuk also said some have begun “weaponizing Jews” by accusing some politicians, such as  U.S. Rep. Ilhan Omar, of being antisemitic.