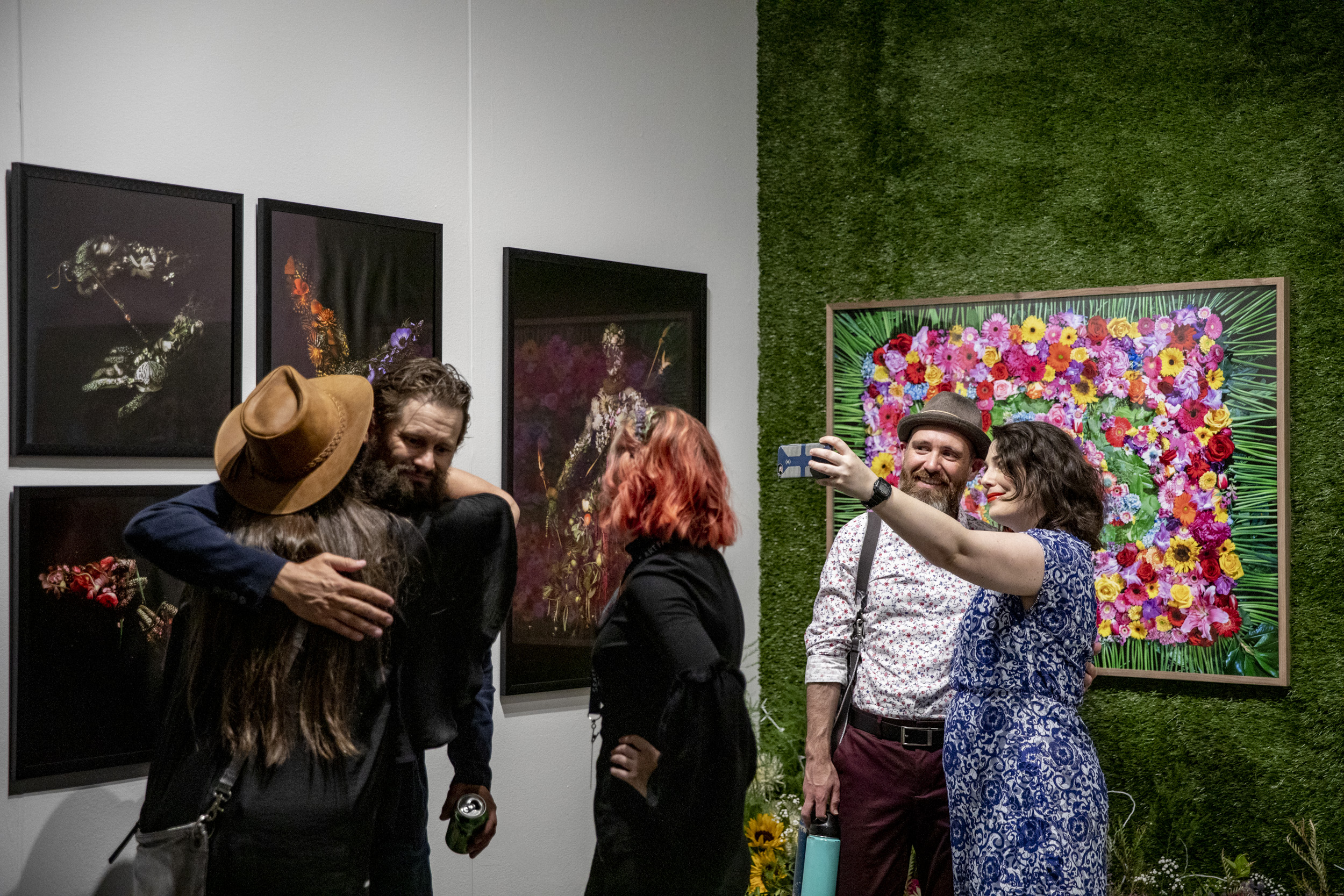 Typical behavior at the Seattle Art Fair — photograph the art, take selfies with the art — is on display at Seattle’s J. Rinehart Gallery booth on Aug. 1, 2019. The Seattle Art Fair continues through Sunday at CenturyLink Field Event Center. (All photos by Dorothy Edwards/Crosscut)

It’s opening night at Seattle Art Fair and there’s something for everyone — whether you enjoy browsing art (museum-style) or buying art (collector-style) or pressing your face into bread products (social-media style).

More than 100 galleries from Seattle to Japan are showing wondrous and flat-out weird wares, all displayed in a massive rat maze of white cubes covering 200,000 square feet of space at the Centurylink Field Event Center. While some local artists and gallerists have wondered whether the absence of Paul Allen (who founded the Seattle Art Fair and was a consistent buyer) would put a damper on this year’s sales, one hour into the event several local artists — including painters Joseph Park and Erik Hall — already have the coveted red dot stickers marking their work as sold.

Crowds build and buzz around Anthony James’s mystifying, multi-sided mirrored sculptures (at Melissa Morgan Fine Art, from Palm Desert, CA), with lookie-loos staring deep into an infinity effect and wondering aloud: “How did he do that?” Meanwhile, over at Patricia Piccinini’s eerily lifelike sculpture The Bread and the Loafers, which features a human woman cradling a highly creepy troll-like creature, people can’t seem to decide whether to look away or step closer.

At Seattle’s Zinc Gallery booth, local installation artist Holly Ballard Martz has covered a teal wall in wire hangers twisted into the shape of a uterus and fallopian tubes — a powerful political commentary that prompts a pair of older women onlookers to stare and say, simply, “Whoa.”

At Blank Space Gallery (New York) you can eat the art right off the wall (at least metaphorically), thanks to artist Jae Yong Kim’s Donut Madness. His life-size ceramic donuts glisten with glazes and sprinkles of all colors (not to mention Swarovski crystals) — but the dozens are swiftly disappearing from their pegs with each hungry collector’s purchase. One can be yours for $950-$1150. (Not recommended for dunking.)

At the Pratt Art Institute booth, staff is making tri-color screen prints on the spot, featuring images by local artists Mark Gibson, Molly Crabapple, Anthony White and Klara Glosova. At the end of each day, the prints will be given away to the first takers — so stick around if you want to bring something home from art fair without dropping a couple thousand bucks.

Even art fair attendees of the youngest age weigh in on art trends. Asked about his favorite piece of art, one savvy seven-year-old boy wearing seersucker shorts doesn’t hesitate: “Picasso,” he says.

And then there’s Bread Face.

The artist-performer keeps her identity anonymous. Wearing a flowered surgical mask, she invites people to smash their faces into one of the baked goods on display: Hawaiian rolls, chocolate muffins, English muffins, croutons.

The anonymous copy editor started recording and posting herself rubbing, pressing and smashing her face into bread in 2015. Now with more than 194,000 followers on Instagram she hesitantly considers herself an artist.

“This is very legit,” she says on opening night as attendees cautiously look at her bread face creations on display. “I’ve accepted there’s no other way to call me.”

Bread Face pushes back. “People have been really artsy, trying to be all academic and I’m like ‘It’s more of a feeling or experience,’” she says.

“Shoving meaning into every piece of art makes it boring after a while. But maybe a lot of people are looking for meaning nowadays.”

Carlos Valenzuela says he was looking for an experience. But after entering a curtained area to “face” the bread, he left feeling an urge to roll around in bread “naked.”

“But not sexually,” he says.

When Bread Face finally performs, a thick line of attendees surround her exhibit area. Gallery attendants shout “No cameras allowed” but that doesn’t stop people from taking photos as Bread Face walks up to 24 different baked goods and one by one, faces the bread.

She smiles. Some people smile back and cheer.

“There’s nothing else that’s funny [like bread],” says Bread Face. “It makes me laugh.”

After meeting and talking with the artist known as Bread Face, reporter Agueda Pacheco Flores wondered if maybe the performances are all just a joke, a way to get people to make fun of themselves. She had to find out. So she tried facing some bread herself. Watch what happened in the following video.

Bread Face: “Do you feel changed?”

Correction: A previous version of this story misidentified a person as the artist Molly Crabapple in a photo caption. The photo shows volunteers printing Crabapple's work.