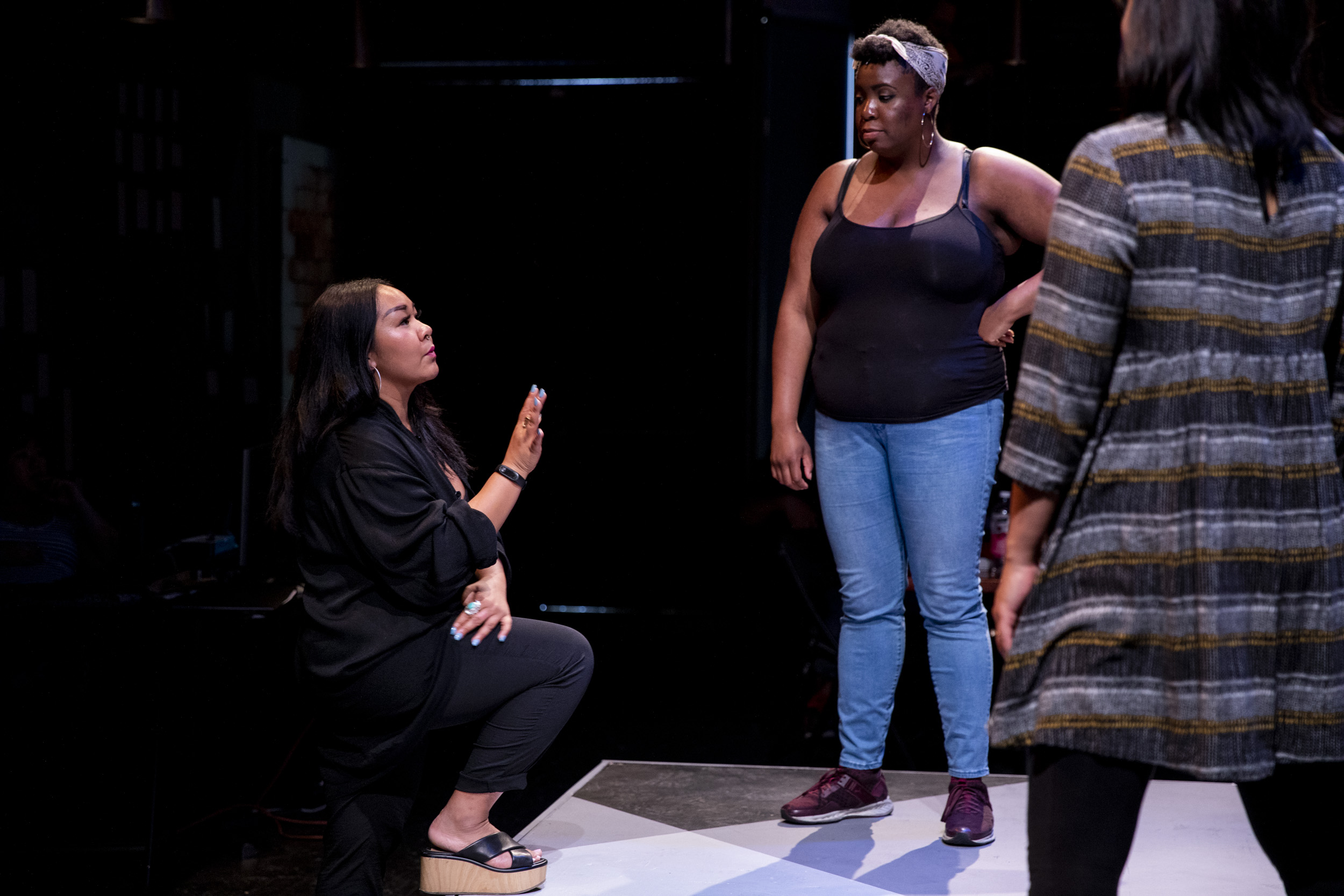 Director and playwright Sara Porkalob leads a rehearsal of ‘7th and Jackson’ at Café Nordo on July 16, 2019. The show continues through Aug. 11. (Photo by Dorothy Edwards/Crosscut)

It is a sunny, sultry summer’s day outside on the streets of Pioneer Square. But for Sara Porkalob, it might as well be a rainy winter’s night. Porkalob is entirely focused on the rehearsal she is leading in the darkened confines of Café Nordo, a theater in a vintage brick storefront on South Main Street.

Before she directs her cast of four actors and a pianist in a painstaking technical run-through of 7th and Jackson, Porkalob conducts a “check in” that she tries to include in every rehearsal. She asks each performer to state their “access needs” and their “access realities” — in essence, how their day is going and “where they are energetically, emotionally, physically.” The idea is to “get a temperature of the room” and understand better what’s going on with her colleagues and what they need from her.

Few stage directors would devote the time or patience to this interpersonal ritual.  But Porkalob is determined not to do theatrical business as usual.

“I like to call it a relational perspective,” she explains, in an emphatic voice, during a prerehearsal conversation. “I try to prioritize relationships rather than transactions. When I’m in the rehearsal room, I’m not just a director. I’m a person, an actor, a friend, a mentor.”

While Porkalob can sound more like a group therapy coach than a highly organized theater pro on deadline, she also comes off as smart and savvy and can punctuate even her most serious pronouncements with an infectious, hooting laugh.  And there is no doubt that this is one gifted, tireless theatrical dynamo, on a roll.

7th and Jackson, a play-with-songs set in Seattle’s musically hip and racially integrated Chinatown-International District from the 1930s to 1961, is Porkalob’s first full-length, ensemble play. And for a change, she isn’t acting in it herself. The play, the story of a multicultural friendship among three women singers (one Filipina American, one Black and one of Korean-Chinese heritage) and a male friend (also Chinese), is serving up its premiere engagement with a tasty several-course dinner at Café Nordo.

A triple-threat Bremerton native, Porkalob has won national attention and opportunities lately via her one-woman, autobiographical theater piece, Dragon Lady, and the two sequels she is developing in Seattle and Boston with director Andrew Russell: Dragon Mama and Dragon Baby.

In Dragon Lady, which she honed and performed to high praise in Seattle over the past several years, Porkalob conveys a complex, droll and at times harrowing family saga. She plays her struggling Filipino grandmother, Maria (a nightclub singer, casino regular and unreliable single parent), and a dozen or so other characters. She also glams up, from time to time, to deliver sexy standards in a lush, vibrant voice.

Earlier this year, Porkalob took Dragon Lady and the new Dragon Mama (about her own mother, who moved Sara to Alaska to spend part of their childhood in a gay commune) on the road. Performing the pieces at Boston’s prestigious American Repertory Theatre (ART), she earned a sheaf of enthusiastic reviews and two regional Elliot Norton Awards (from the Boston Theater Critics Association) and a sheaf of enthusiastic reviews. A Boston Globe rave echoed Seattle by hailing Porkalob as a “powerhouse” performer who “generates plenty of electricity all by herself.”

ART is also commissioning Dragon Baby, Porkalob’s new multiactor piece about her coming of age as a student at Seattle’s Cornish College of the Arts, an educational venture she is highly critical of today.

And there’s more, much more, on her 2019-20 schedule: Alex and Alix, another new script she’s writing for a world premiere stand at ArtsWest next spring; an in-process peek at one of the new Dragon plays at ACT Theatre’s One Coast Collaboration new plays fest; and though it hasn’t been announced yet, probably a Seattle acting gig in a play by someone else.

Porkalob also considers herself a community activist, with an agenda. “I want to become more involved in city governance, arts access and how the arts play into a city’s ecosystem and wellness,” she says.

There are also the “many coffee dates” with young performers she mentors, and a Gmail file stuffed with other ideas and plans.

To manage it all, Porkalob has developed a philosophy “in retaliation to my education” — which in college centered on reading and performing plays that she felt didn’t relate to her background or her community. (She currently resides in Pioneer Square.)  In a manifesto laced with progressive rhetoric, she explains, “I left college feeling very emotionally listless and uninspired. This isn’t a critique of individuals at school. But, rather, it truly points to how America, as a white-dominated society, prioritizes education and skill-building in a linear way of thinking about the world within our sociopolitical system, which is capitalism. Capitalism is all about transaction, and individual opportunity. … And I don’t work that way!”

There’s no doubt, however, who is in charge during the 7th and Jackson rehearsal. But with a wide smile, frequent dollops of praise and encouragement, and a “mindful” spirit of collaboration, Porkalob added new lighting cues and put actor-singers Anasofia Gallegos, Corinne Magin and Sarah Nicole Russell through their paces, as they harmonized sweetly on an Andrews Sisters-style rendition of Stardust and acted out a childhood flashback.

As it follows the spunky three through adolescence into adulthood, 7th and Jackson wedges in some of the little-known history of a Seattle district of different races and backgrounds who lived, worked and partied in social harmony during much of the 1930s and ’40s, according to Porkalob.

While researching the era, she uncovered a lot of intriguing history for the show. One example: the attempts by politicians to pass a state anti-miscegenation law in the 1930s, which was defeated after protests by a coalition of Black, Filipino and progressive labor activists. And the 1938 death in police custody of a young Black man, Barry Lawson, which resulted in the trial and manslaughter convictions of three white officers, after pressure from the Black community.

If anything, Porkalob acknowledges, “The biggest challenge for me with this show was really zeroing in and trying to find which history to incorporate. It was like the breadth of the history is so wide — how can I keep it intersecting with these specific relationships, between these specific women? I could write a whole play about each of their characters.”

But that, Porkalob contends, is for later. With customary self-confidence and ambition, she declares, “My goal is to move into television. When I create my plays, I always see them as movies in my mind.”

Ultimately Porkalob envisions her own production company making a movie of The Dragon Trilogy and other original works.

Naïve? A pipe dream, for an actor-singer-director who has yet to perform in the entertainment media centers of Los Angeles and New York City?

Maybe not. So far, no one has gotten rich betting against Sara Porkalob.

Correction: An earlier version of this story misstated the name of the production, the ethnicity of one of the actors, the neighborhood where Sara Porkalob lives and that her mother moved her and her sister to Alaska. Porkalob does not have a sister.