Four months in, ridership on the $3.2M Via service is reportedly exceeding expectations. 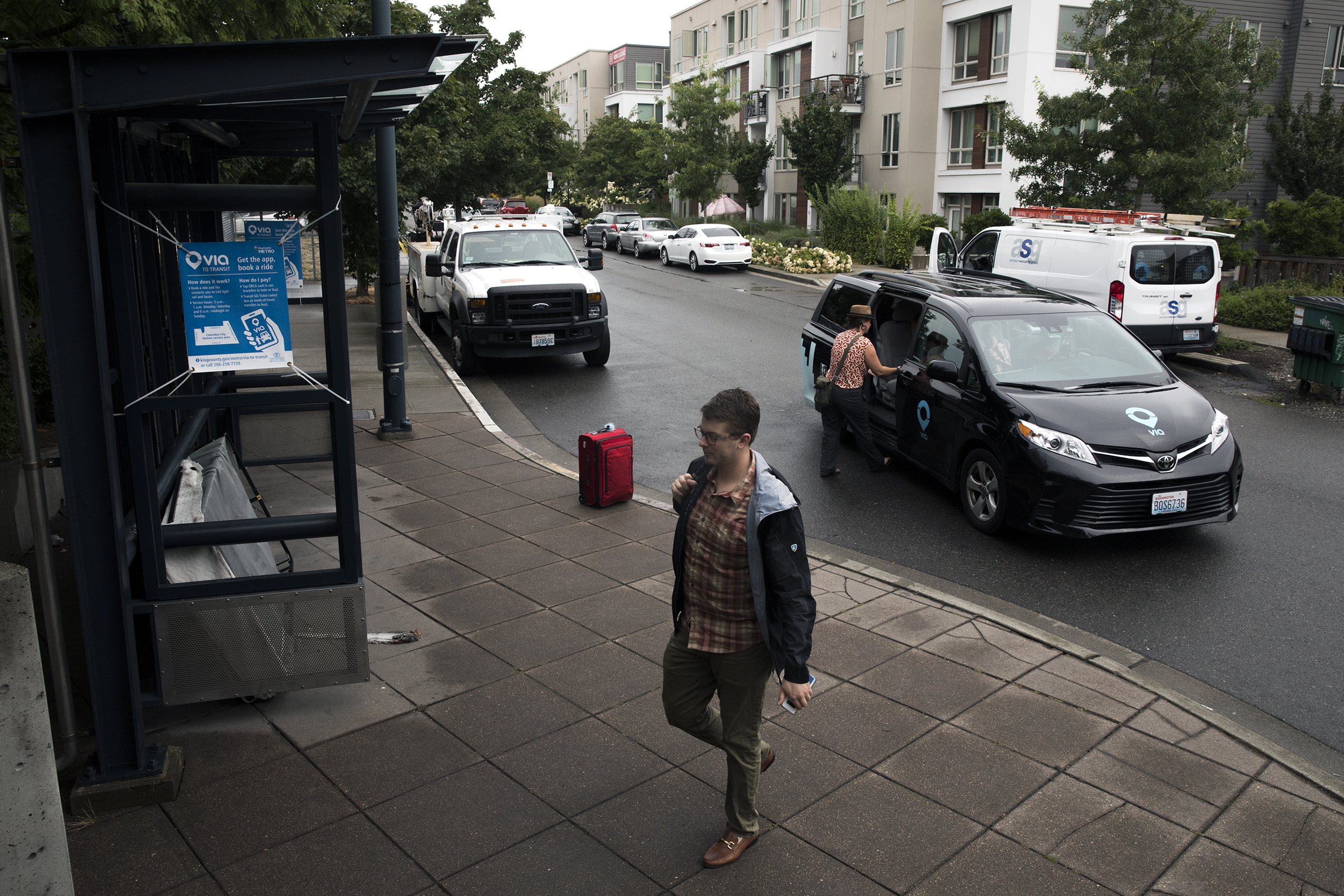 If you’ve ridden light rail in the Rainier Valley in the past few months you’ve no doubt seen them: black vans with a blue Seattle skyline painted on the sides.

Called Via to Transit, the vans look like they could be an Uber spinoff. In fact, passengers dial up the rides through an app similar to any ride hailing service. But as the King County Metro Transit logo emblazoned on the door indicates, the vans are part of a county-run experiment with on-demand “microtransit.”

Launched in April, the service connects transit riders with light rail and bus lines. Southeast Seattle has little east-west bus service, which makes it difficult for people to reach the north-south-running light rail line by bus.

“We’re making it easier for people to access light rail and our buses,” said Casey Gifford, Metro’s Via project manager. “It is also about broadening access to [ride hailing] for populations that haven’t generally been able to access them.”

Via is a private company contracted by Metro to provide the vans, drivers and technology. The $3.2 million, year-long operation is funded by $2.7 million from Seattle’s transportation benefits district levy, a $350,000 Federal Transit Administration grant and $100,000 each from Metro and Sound Transit. Four months into the pilot project, Metro has collected enough data to get a sense of whether the subsidized rideshare is working.

It’s far too early for the agency to declare victory, but so far, the service has exceeded Metro’s daily ridership goals and served up more than 70,000 total rides.

Via users order a ride through the app or by calling a service center at 206-258-7739. Users connect with a driver and are usually directed to walk a few blocks for pickup. All rides on Via have the potential to be shared rides, similar to UberPool or Lyft Shared, so the app tries to route the driver on the straightest line between pickups and final destinations.

Rides cost the same as taking the bus: $2.75 for adults, $1.50 for low-income riders with ORCA Lift cards. Rides are paid for with ORCA cards or the Transit GO Ticket app. Users can also preload ORCA cards in advance with cash — an effort to increase access for people without smartphones and banks — but the drivers cannot accept cash. Via has 18 vans in its fleet, some of which are wheelchair accessible.

The service is available in the Rainier Valley in neighborhoods surrounding the Mount Baker, Columbia City, Othello and Rainier Beach rail stations, as well is in Tukwila near the Tukwila International Boulevard station. To keep the trips short, rides must take place within a relatively small service area; the Columbia City service area for example is about 2 square miles stretching between Beacon Hill, Lake Washington and Dakota and Orcas streets.

So, are people taking advantage of an opportunity for low-cost ride hailing? More than expected, said Metro’s Gifford. According to her, the goal was to average 525 rides per day. Instead Via averages 770 rides a day, with 1,000 rides on the busiest days.

That puts Via’s ridership on par with bus routes designed to ensure an area has at least some transit coverage. The 121 route from Burien to downtown Seattle averages 900 rides a day, in the ballpark with Via’s initial ridership.

About 30 percent of Via’s ridership so far has been reduced-fare rides. Gifford could not provide data about the number of rides that have been carpool rides versus solo rides. Just over 200 wheelchair users have taken Via rides.

According to Metro, Via’s cost per ride to the operator is about $10. Compared to Metro’s systemwide cost per boarding of $4.92, that’s expensive. But high ridership bus routes have a lower cost per boarding than low ridership routes, meaning Via’s costs are not wildly out of line with costs associated with low-rider routes.

Metro’s Gifford explained that unlike Uber and Lyft drivers who are paid per ride, Via drivers are paid an hourly wage. The agency’s contract with Via stipulates a base wage of $15 an hour, with a higher rate paid at rush hour and for driving wheelchair users. Via driver wages are lower than the union Metro driver scale.

“Is this cost reasonable mostly because we’re relying on lower-wage labor?” asked Katie Wilson, general secretary of the Transit Riders Union, an advocacy group. “So it’s a question of how far do we want to go down that road.”

Providing people better access to transit is the goal of the program and one end of the trip must be to or from the light rail station within the service area. People could theoretically use Via to get to the grocery store, a friend’s house or to work, if it was close to the light rail station, however.

That doesn't appear to be happening much. Gifford said ORCA card data shows more than 90 percent of Via riders transfer to and from light rail. Metro is just beginning to conduct rider surveys to find out whether Via is creating new transit riders, whether people are replacing car trips to the light rail station or simply giving up and replacing slower bus rides.

Hester Serebrin, policy director with the advocacy nonprofit Transportation Choices Coalition, said she’s excited about the data Metro might glean from Via showing where and when people need better transportation, but hopes that contracted, on-demand van service isn’t a permanent fixture.

“We see this as an interim solution,” Serebrin said. “But fixed-route, publicly owned transit is the ultimate solution. We want to be able to expand King County Metro service and make sure their buses are reliable, fast, affordable.”

Ben Fried, communications director at the New York-based transportation research nonprofit TransitCenter, similarly thinks a service like Via can’t be a replacement for good bus service, but can potentially be a substitute for something like Access paratransit — Metro’s on-demand service for people with mental or physical disabilities who can’t otherwise ride transit.

“A good way of thinking about microtransit is it can be a slightly more efficient paratransit-type service,” he explained. “But it can’t be a substitute for fixed-route service. It just doesn’t scale up the way a bus does.”

Metro operates two similar programs: one to connect people on the Eastside to the Eastgate Park and Ride and another to connect West Seattleites from the California-Alaska Junction to the Alki water taxi. Via also operates in New York, Los Angeles, Chicago and elsewhere. Some places, such as Pinellas County, Florida, offer residents subsidized Uber and Lyft rides to connect to bus stops.

Kansas City ran a famously unsuccessful pilot project in partnership with the now-defunct microtransit service Bridj. Over the course of the yearlong, $1.5 million pilot, people took just 1,480 rides. That means the city subsidized the service to the tune of $1,000 per ride.

Fried doesn’t see Via boosting light rail ridership. Microtransit, he said, can complement public transit in situations where people might not be able otherwise to get to a train station. But it is not a comprehensive solution to the “last-mile problem.”

“It would be a mistake for transit agencies and cities to rely on this kind of last-mile connection to the exclusion of making better walking and biking connections to transit hubs,” he said. “Those are also very low-cost ways to make it easier to connect to transit.”

Gifford said she sees a place for Via-type services in the agency’s future.

“Metro’s becoming a mobility agency,” she said. “It means that we’re trying to do what we do best,  which is providing really great high-capacity fixed route transit and working with communities to complement that fixed route service with a range of other options that fit that community.”

Gifford said it will be evaluated by a number of metrics to decide whether it’s worth continuing past the first year or expanding.

The Via pilot project will run through mid-April of next year. The agency will decide in early 2020 if it will continue as a permanent program.

Correction: This story has been updated to clarify that one end of a Via trip must be to or from a light rail station. A previous version of the story said trips could be to and from anywhere in the service area.