Seattle's primary turnout was largest since 2011, which could mean big numbers in November

Seattle's wealthiest precincts turned out in force. But younger voters and renters also saw increases from past years. 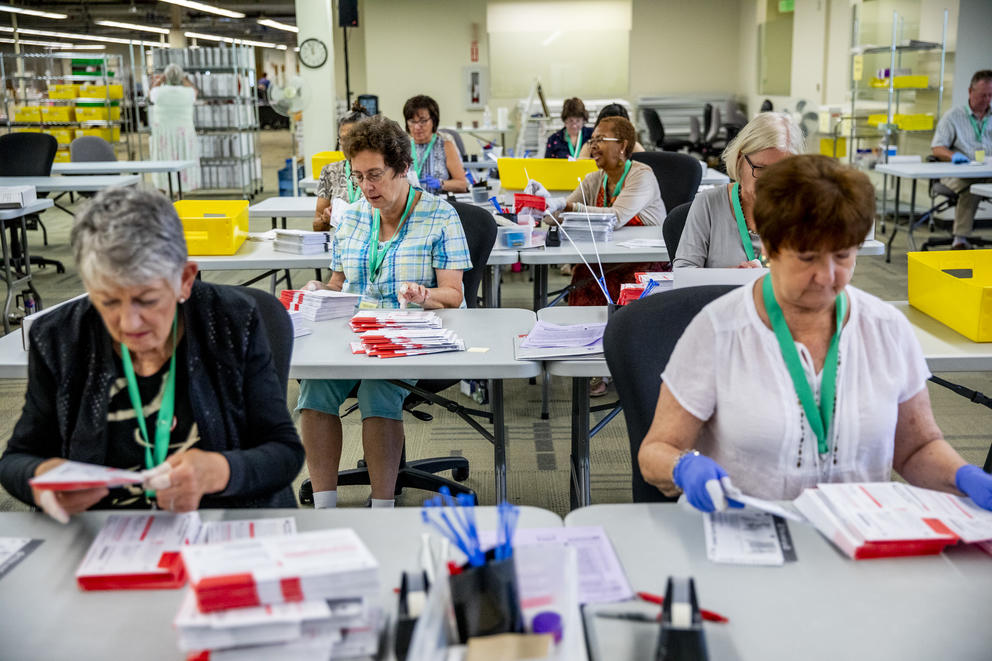 Ballots are sorted at the King County Elections headquarters on Aug. 5, 2019 (Photo by Dorothy Edwards/Crosscut)

For pollster Andrew Thibault, one thing has become clear following the August primary election: This is a year of change. The type of change is still unclear to him. But the turnout in Seattle for an off-year primary in the middle of summer was so voracious, Thibault said it’s hard to see this as just another year.

“You don’t typically see elevated turnout for the status quo,” said Thibault, who works for EMC Research, a polling and research firm. “If everything’s going along nicely, turnout tends to revert to the average.”

Amid a citywide conversation — or fight — about homelessness and a greater emphasis on door-to-door contacts by candidates, turnout was indeed elevated. Despite predictions that voter response would land somewhere in the mid-30s, Seattle’s turnout ended up close to 43 percent. The returns were certified earlier this week.

While that number still falls short of even-year national elections, it easily bests comparable local primaries dating back to at least 2011. That includes two mayoral primaries in 2013 and 2017 — which tend to drive a more involved citywide conversation.

“My spreadsheet tells me it’s possible, my head says that’s crazy,” Thibault said. “It would have to be well out of line, but the primary was.”

But this year’s election may have also brought in voters who only participate in national elections. Many of the typically reliable voting blocs — older, richer homeowners — turned out in large numbers. But at the same time, a greater number of young renters also voted in this election when compared to past years.

It’s possible, said local political consultant Ben Anderstone, that “it’s people who are open to voting in elections, but who are out of the habit, that were activated.”

Citizens across the political spectrum have been united in their desire to see the city do better on homelessness. As a result, spin off issues — the passed, then repealed business tax; the KOMO’s controversial “Seattle is Dying” program; encampment sweeps — have taken on an existential quality.

Anderstone, who was three time -zones away in Ontario, Canada, when he spoke by phone, said the person who picked him up from the airport asked him about “Seattle is Dying,” a viral report that contained montages of people experiencing drug and mental health crises.

Because of the ubiquity of this one conversation, the primary took on some of the attributes that drive turnout in a presidential race, said Anderstone.

“I think the ‘Seattle is Dying’ documentary and the ancillary conversation around that is creating that citywide narrative even though there’s no citywide race,” he added.

Political consultant Crystal Fincher also sees another force at play: More direct voter contact. She mostly credits the city’s Democracy Voucher program — through which every voter gets $100 worth of public vouchers to donate — but also points to more door-to-door communication funded by local political action committees. And with the small electorate within each of the city’s seven districts, campaigns have incentive to target irregular voters.

“There was just an unprecedented effort at voter contact in a primary election,” Fincher said. “The more you contact people, the more likely they are to vote. And that’s what we saw. I think that’s what explains Seattle’s increase above just the average in the area.”

Thibault said he doesn’t see any clear narrative in the results of the race or the turnout. On the one hand, the Seattle Metropolitan Chamber of Commerce can point to the fact that one of their candidates made it through to the general in every race. On the other hand, Seattle’s progressives can argue that the candidate considered more to the left was the top candidate in every race but one.

“Turnout wasn’t asymmetrical in terms of ideology,” said Thibault. “You didn’t see a really heavy skew one way or the other.”

Turnout was highest in Seattle’s richest precincts, according to data from King County Elections. The swath of land near Seward Park, along the water, had the highest turnout at just over 70 percent turnout. A precinct on the Magnolia bluff, overlooking Puget Sound, had the second highest turnout at just under 70 percent. Leschi, near Lake Washington, came in third. Even Broadmoor, the gated community whose turnout often matches city averages, exceeded 60 percent.

The lowest-turnout precincts were around the University of Washington, especially near Greek Row. Several were below 10 percent, perhaps because school was not in session.

According to Thibault’s analysis, high-income voters made up a higher percentage of the overall electorate — 59 percent earned over $100,000 compared to 56 percent in 2015.

Across King County, turnout also skewed heavily toward older voters, according to King County’s election data. Over 60 percent of voters were older than 50. Just 10.5 percent were between 18 and 30.

In Seattle alone, however, the electorate was younger than in 2015, according to Thibault’s analysis — 47 percent, up from 42 percent. Additionally, renters made up 38 percent of this year’s primary voters, an increase from 33 percent in 2015.

“I think that younger people, quite clearly, are engaged to a greater degree than they were before,” Fincher said.

Moving into the general, there will be a huge number of votes up for grabs. In Districts 3, 6 and 7, more people voted for a candidate who didn’t make it through to the general than the total gathered by the first place finisher. That was nearly true in District 4 as well.

“There are two ways to increase your vote total,” said Thibault. One: reallocating the votes of everyone else. And two: picking up new voters. It appears there will be plenty of opportunity for both.