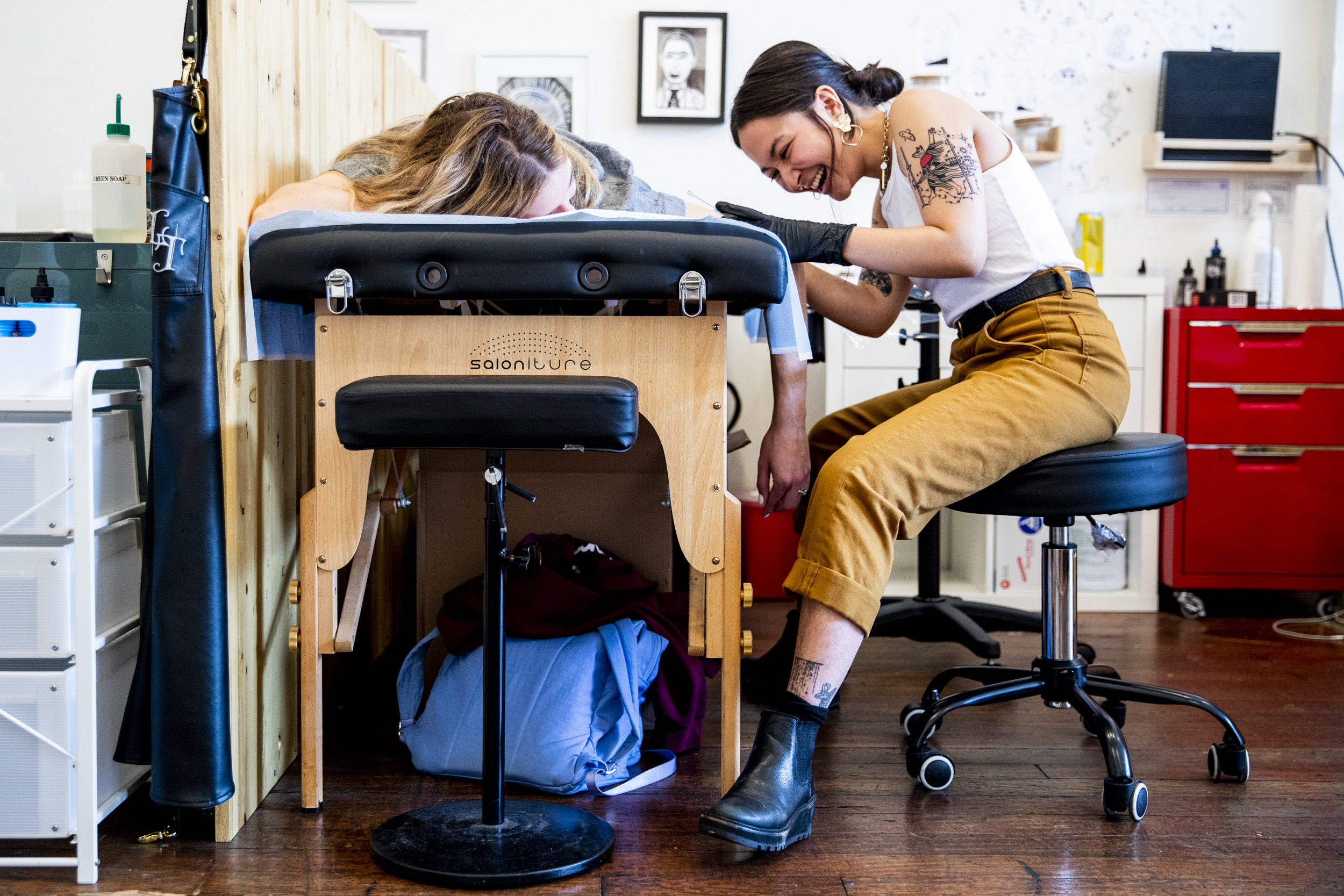 Lauren Clinkenbeard is lying down on a massage table, quietly and calmly chatting with and getting to know Avery Osajima, who is repeatedly poking the back of Clinkenbeard’s arm with a needle dipped in ink.

In contrast to the dark walls, heavy metal music and grungy look of many tattoo shops, the Lilith Tattoo shop in Fremont is a well-lit space with a large window surrounded by white walls and soft music. “I feel like you have a calming presence,” Clinkenbeard says to Osajima, who says the same thing back to her immediately.

This is Clinkenbeard’s second tattoo — but her first via the “stick-and-poke” technique. In this Instagram-popular DIY technique, the tattoo artist uses only the power of their hand and a surgical steel needle (as opposed to a needle powered by a machine) to push ink into skin. Having received her previous tattoo (the word “Glory”) via the standard motorized method, Clinkenbeard reassures Osajima that the stick-and-poke tattoo process is “exponentially more comfortable and enjoyable.”

Osajima is one of many queer artists in Seattle who work at a shop owned and operated by a queer person. Jude Vesvarut (who goes by they/them) opened Lilith Tattoo in 2017. Like many female, queer and nonwhite tattoo artists, Osajima prefers an environment that caters more intentionally to the LGBTQ community.

As tattoos have become more widely accepted in the mainstream, queer shop owners and artists say they are reimagining the culture as one that’s more inclusive and welcoming (rather than the old-school, rough-and-tumble rebel vibe). The stick-and-poke technique reflects this atmosphere because it’s less aggressive physically, moves at a slower pace and feels more intimate — partly because the lack of machine whir allows for close talking.

Spaces like these offer judgment-free zones that feel safe to queer customers — not only accepting of all bodies but understanding of their scars and gender transitions, says Lilith’s Vesvarut.

“[Tattooing] is a very intimate thing, you’re in a vulnerable space and you’re receiving pain,” Vesvarut says. “If you feel physical pain and don’t feel emotionally safe it can be traumatizing.”

Just like LGBTQ people have reclaimed the word queer (which was once a derogatory word), so too have tattoos become a tool to empower the LGBTQ community.

Sylver Fawkes, a transgender artist at Lilith Tattoo, says tattoos allow queer people to put their “inside on the outside.”

“The more we can express our own individuality, the happier we are,” says Fawkes.

Vesvarut jokes that tattoos have become such a huge part of queer culture that it’s now more fringe if a queer person doesn’t have tattoos. “It’s helped reclaim and empower our bodies,” Vesvarut says.

On Osajima’s left middle finger is a hand-poked Japanese character of her father’s name. It’s the first stick-and-poke tattoo she did on herself. Osajima, who identifies as Yonsei (a fourth generation descendant of Japanese immigrants), says it’s incredibly rewarding to see her own experience as a queer person of color reflected in the work she does. A large majority of her clients are queer people, as well as Japanese Americans, including some employees of the local nonprofit Densho, which documents the experiences from within the Japanese internment camps during WWII.

She says nearly 95 percent of her clients find her on Instagram, where she boasts an impressive 18,400 followers. With so many fans, she has more work than she can sometimes handle. Because of the popularity of stick-and-poke, Osajima says there’s enough work to keep local practitioners busy.

Her tattoos are simple yet bold, with designs including hands holding the sun as a horizon escapes the confines of its frame, two koi fish swimming around the moon, and a crane delicately spreading its wings. The details are so fine, they appear to twinkle and come alive like the night sky. She’s inspired by her heritage, and often looks to traditional Japanese prints known as Ukiyo-E, or “pictures of the floating world.” The images in the woodblock prints depict nature and folklore scenes with meticulous and striking lines and have a hand-crafted look, just like her tattoos.

Although some might associate the stick-and-poke technique with low-tech “prison tattoos,” it’s rooted in cultures across the globe. From the Japanese artists that inspire Osajima today, to ancient Egyptians and Polynesian communities in the Pacific, stick-and-poke has a long history of being used in nonwhite societies.

Avery Osajima works on a stick-and-poke, or machine-free, tattoo at Lilith Tattoo shop in Fremont.

History aside, longtime Seattle tattoo artist Jeff Cornell (of Hidden Hand Tattoo in Fremont) says the stick-and-poke revival has not been met with open arms by the greater tattoo community. “A large percentage of professional tattooers find the whole thing to be offensive and disrespectful,” he says. “This is mostly due to the lack of understanding of and respect for the traditions of American tattooing and its industry on the part of stick-and-pokers. To me personally, it’s like fixie bicycles — willfully choosing to ignore decades of technology in favor of doing something in the absolutely most difficult and slow manner possible.”

Cornell posits that stick-and-poke’s popularity is due to people seeking a short-cut alternative to the traditional tattoo apprenticeship. “On one hand, this is introducing some stylistic and technical aspects into tattooing that one could argue are positives. On the other hand, it has introduced a counterculture of untrained and untethered artists who lack any attachment to the greater industry as a whole and so feel no allegiance to it.”

But after raising his concerns, Cornell concedes, “So it’s pretty punk rock and I guess we old crusty tattooers now represent the curmudgeon generation with its foot against the door.”

“The tattoo industry was resistant,” Vesvarut says, adding that the low-brow aesthetic can be antithetical to the mainstream tattoo culture, which has long been a predominantly white male domain. Aspiring queer tattoo artists, especially those embracing a different approach to tattoos, can be shut off from opportunities, Vesvarut says.

It’s why Vesvarut prefers to give apprenticeships and jobs to queer people of color. A diversity of practitioners also pushes the boundaries of representation in the art form itself, from “pussies spilling out the universe” to images of “fat queer femme women.”

Local tattoo artist MKNZ, who works at Valentine’s Tattoo shop on Capitol Hill, is known for fat-positive body representation in her art. She started tattooing stick-and-pokes on her friends for fun until she realized people were starting to request her work more and more. Her stick-and-poke tattoos of fat bodies and thick booties in racy and inviting poses have achieved viral acclaim. With nearly 30,000 followers on Instagram, she says there’s a demand for artists who don’t “play by the rules” of standard tattoo culture.

“There’s a lot of strange nonrules that exist,” MKNZ explains. Clients have come to her with stories of being turned away by other artists for wanting tattoos on their earlobes, hands or necks. And depending on the artist’s style, stick-and-pokes can have a deliberately low-quality look to them — an aesthetic that is sometimes rejected by the mainstream industry.

Pointing out that most tattoo artists are essentially appropriating Polynesian practices, MKNZ brushes off such “rules.”

“It’s your body, do whatever you want,” she says. “Tattoos have no obligation to be ‘beautiful.’”