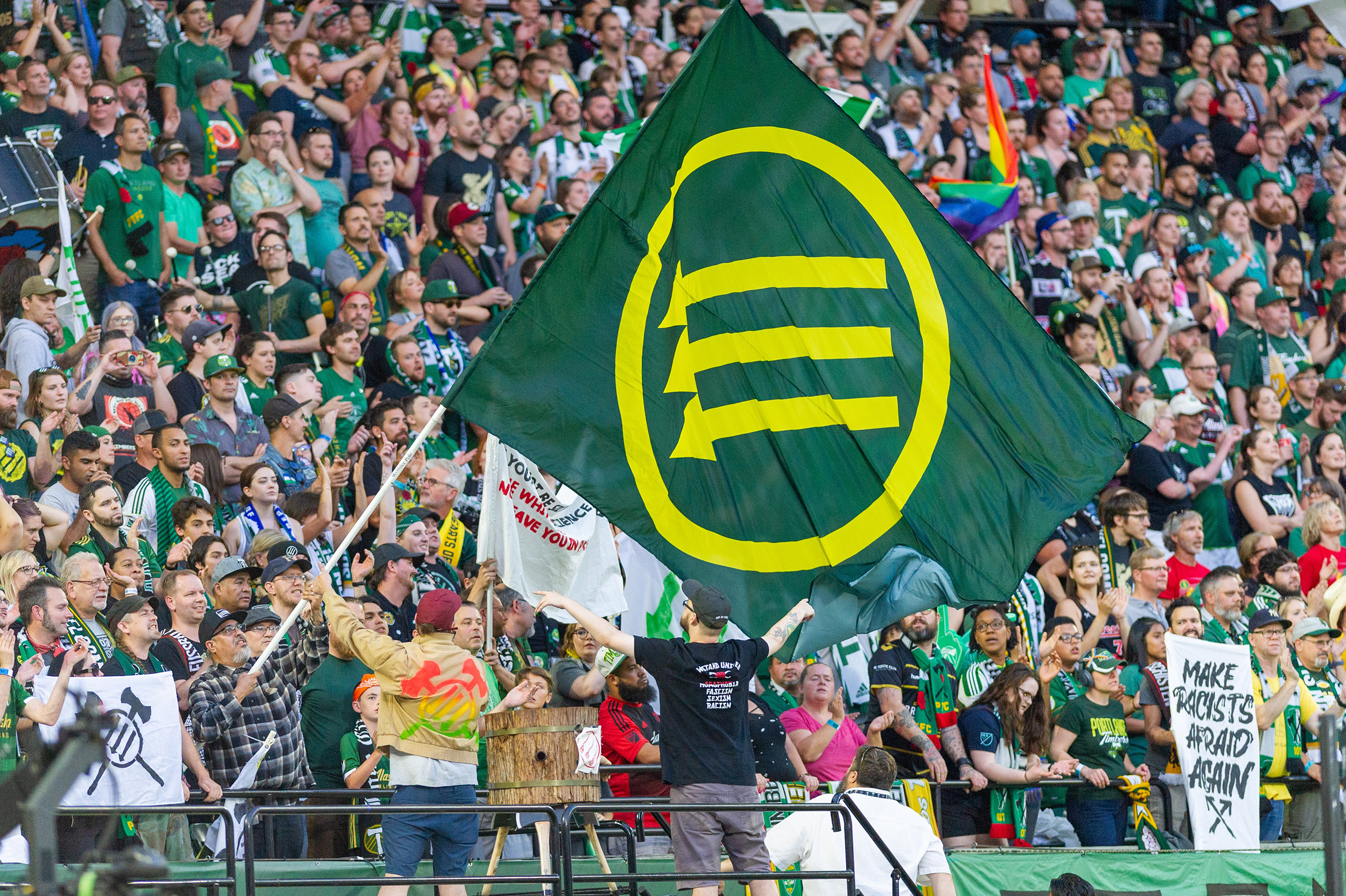 Portland Timbers fans fly an Iron Front flag during the team’s match against the Seattle Sounders at Providence Park in Portland, Ore., Friday. Sounders fans joined in a protest against the banning of the symbol. (Photo by Diego Diaz/Icon Sportswire)

For the first 33 minutes of Friday’s Major League Soccer match at Providence Park in Portland, supporters of both the Seattle Sounders and Portland Timbers joined together in a silent show of unity.

The rival soccer fans, many of whom displayed banners and wore T-shirts featuring an anti-fascist symbol known as the Iron Front, came together to deliver a unified message of resistance before bursting into team songs. They were also sending a message to MLS and the management of the teams that were at that moment facing off on the pitch below: They will not be silenced.

The protest was the culmination of a series of events that date back to March, before the start of the MLS season. It was then that the league implemented a new Fan Code of Conduct that in part banned “political” displays. In the months since, the new rule has fueled controversy, united rival fan bases and tested the relationship between supporters and their teams. The display from supporters at the Friday match showed that the fight over the Iron Front is far from over.

Leaders from the Timbers Army objected immediately to the new policy, which effectively banned in-match displays of the Iron Front symbol, which consists of three arrows inside a circle pointing downward and to the left. The supporters expressed frustration with MLS and Commissioner Don Garber in multiple posts on the group’s official website. Then, during a July 21 match between the Timbers and the Sounders in Seattle, Sounders fan groups the Emerald City Supporters and Gorilla FC showed solidarity with the Timbers Army by flying the Iron Front flag at CenturyLink Field.

Five days later, the Sounders issued a warning to their fan groups, claiming that the flag violated the MLS Fan Code of Conduct, since it represents “an association to a political group.”

The crux of the issue for Timbers and Sounders fans alike lies with the characterization of the Iron Front symbol as political. While groups associated with antifa, the loosely organized left-wing movement frequently excoriated by conservative media and President Donald Trump, have used the symbol as well, representatives from the Timbers Army, Emerald City Supporters and Gorilla FC have said that they do not display the symbol for political purposes.

The supporters groups claim to display the Iron Front symbol as part of their commitment to equality and inclusion. The symbol originated in the 1930s in Germany as a symbol of resistance against Nazism and associated persecution. The Nazis disbanded the original Iron Front paramilitary group from Germany in 1933, a year that supporters nodded to with the length of their silent protest.

“The rights we stand for are not political, they are human rights,” ECS leadership wrote on their website after the July 26 warning from the team. “No one should be oppressed or persecuted because of who they are. As with all things in life no one should feel they can’t attend a soccer match and support the club they love. Just like the Iron Front symbol, the Emerald City Supporters stand for the oppressed and the persecuted.”

Jeremiah Oshan, senior editor at team blog Sounder at Heart, wrote a rare letter from the editor on the website where he objected to part of the statement that mentioned Iron Front in the same breath as Antifa and right-wing groups Proud Boys and Patriot Prayer.

“My heart absolutely sank after reading this,” Oshan wrote. “The Sounders, an organization that has often struck me as thoughtful and even progressive at times, was treating the Iron Front symbol — which was designed to empower people whose lives are literally being threatened with extermination, no matter what it’s perceived to represent now — as somehow equivalent to groups who openly court white supremacists.”

The Sounders organization amended its original statement the following week. Owner Adrian Hanauer sent a letter to the fan leadership apologizing for the team “not putting its best foot forward” while acknowledging the team’s responsibility to adhere to MLS rules.

“We support all messages of inclusion, embracing diversity, standing against hate, bigotry, racism and intolerance,” Hanauer wrote. “In some instances, specific words and specific symbols may not be permitted in those messages. These are complex issues, which is why maintaining an open line of communication with you and your respective groups is so important.”

As part of the apology, vice president of business operations Taylor Graham appeared before the media on Aug. 2. Similarly to Hanauer, Graham took care to walk a middle path regarding use of the symbol, not directly condoning its display when pressed by media, but also avoiding declaring it banned from the stadium.

“Our supporter groups have got great leadership,” Graham said in response to a question about the symbol. “They know what the Fan Code of Conduct says.”

Sounders sources indicated that the team hopes to approach the issue similarly for the remainder of the 2019 regular season, which concludes in October, encouraging its ardent fans to read between the lines regarding the Fan Code of Conduct.

While it is upholding the ban on the Iron Front, the team continues to stand behind another similar message regularly on display at Sounders matches: “Anti-Facist, Anti-Racist, Always Seattle.” Before Friday’s match in Portland, which the Sounders won, 2-1, both teams’ starting lineups posed with a banner containing the message. The Sounders also posted a photo of the banner to its Instagram account.

While displays of the phrase have been allowed at CenturyLink Field, it hasn’t been universally accepted league-wide. In 2017, two Sounders fans were removed from a match at BC Place in Vancouver for holding a sign displaying the phrase. The team responded by releasing a statement in support of the fans. More recently, Emerald City Supporters co-president Shawn Wheeler posted on Twitter that he was ejected from the Sounders Aug. 17 match at Dignity Health Sports Park in Carson, Calif., against the Los Angeles Galaxy for displaying an “Anti-Facist, Anti-Racist, Always Seattle” banner.

Players from both teams expressed support for the movement in other ways as well. Timbers defender Zarek Valentin entered the stadium wearing a stylized hybrid of the Iron Front symbol and Timbers logo, while Sounders goalkeeper Stefan Frei told Sounder at Heart after the match that he was happy about the silent protest at the beginning of the match and said the league banning the Iron Front logo is an issue.

Oshan thinks the team has reached a “detente” with its supporters regarding the logo. Still, supporters groups for both the Sounders and Timbers remain insistent that their clubs lobby MLS to rescind the “subjective” ban on political displays.

Tom Conquergood, a leader with Gorilla FC, said his group has “no set plans” to protest at upcoming home matches, the next of which takes place Sept. 1 against the Los Angeles Galaxy. He indicated the Iron Front logo will continue to have a presence among Sounders supporters at future matches, much like it did Friday in Portland, despite the ban. 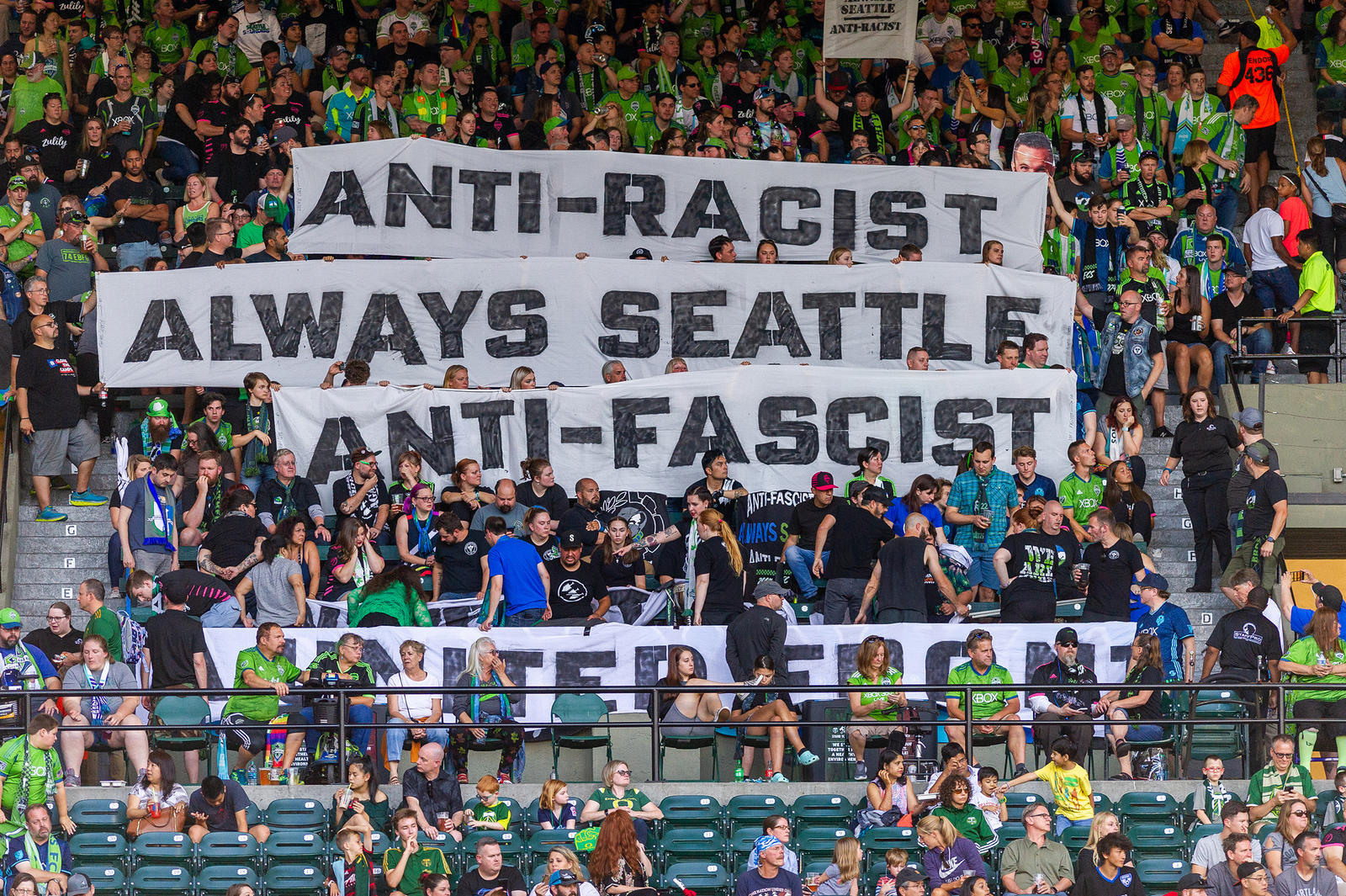 “Our plans are dependent on the progress made over the weekend,” Conquergood said. “We were happy to see the Iron Front flying in Portland. We have always provided a means for personal expression of the Iron Front, and we have members intending to fly Iron Front flags if the ban is upheld at CenturyLink Field.”

Meanwhile there remain safety concerns from groups that oppose the anti-fascism message. On Aug. 4, just two days after Graham addressed the media, a dozen right-wing provocateurs descended on the area surrounding CenturyLink Field and repeatedly engaged with Sounders fans before a match, including in one confrontation that led to brief violence.

A team source indicated that the Aug. 4 and Aug. 10 matches saw an increased security presence around the match and that the brief incident, which reportedly remains under investigation, was the only significant security issue at either of the past two home matches.

The source also indicated that both the Sounders and Timbers hope to have meaningful conversations with MLS about the Fan Code of Conduct following the season. Until then, the team will be tasked with walking a fine line, remaining in concert with its supporters while respecting a policy delivered from on high.

Correction: A previous version of this story stated that supporters of both the Sounders and the Timbers joined together to sing "Bella Ciao" following their 33 minutes of silence. While the Portland fans did sing the Italian folk song in that moment, Seattle fans recited the song "Us vs. Them." The story has been corrected. 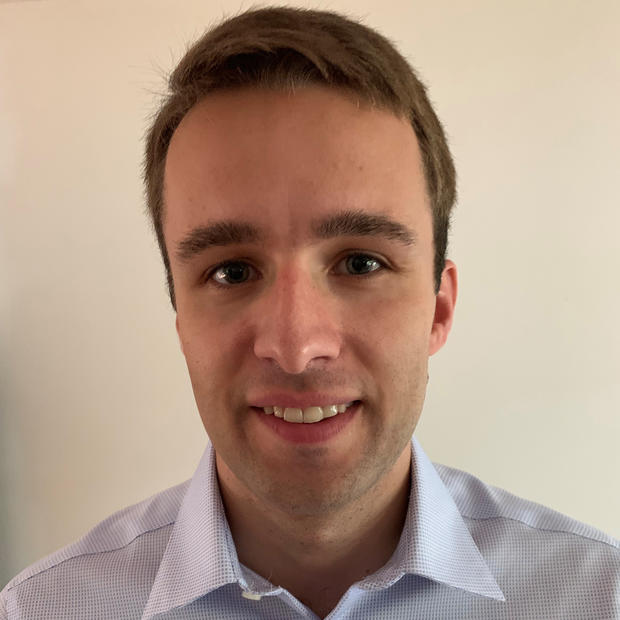 Patrick Leary is a Seattle-based writer focused on sports and business.