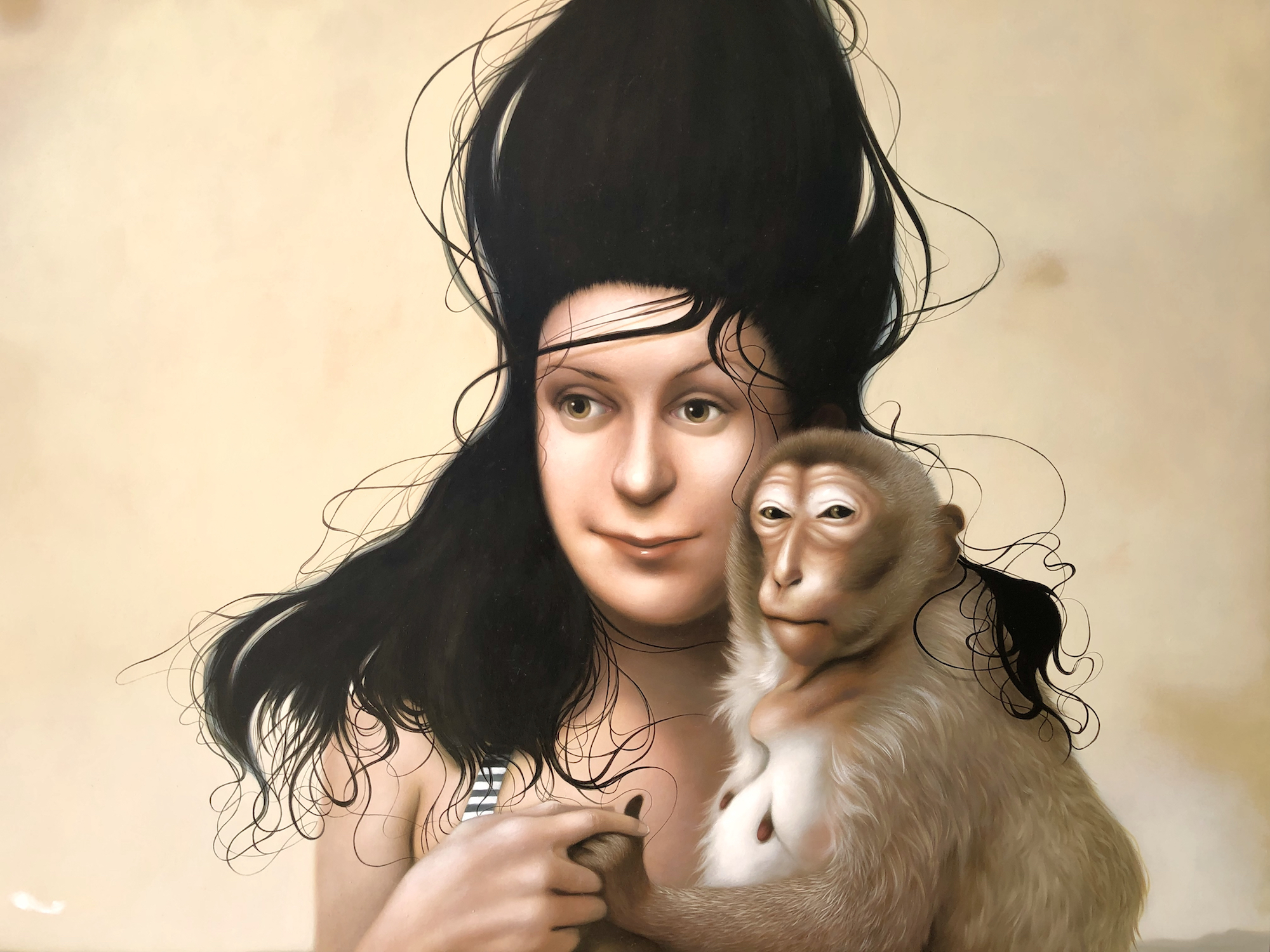 “Monkey Hair” (detail) is one of several paintings in a memorial show of work by Seattle artist Francesca Sundsten. (Image courtesy of Hall Spassov Gallery)

Throughout her painting career, Francesca Sundsten (1960-2019) was heralded for her meticulous talent for realism — a well-earned compliment. But it’s equally true that the Seattle-based artist and teacher was a master of the surreal, not to mention the really unusual. A boy with hair made of trees (complete with bird's nest). A woman wearing a snake as an accessory. A human with tentacles sprouting from their scalp. A dog with a woman’s head. In Sundsten’s exquisitely painterly hand, we believe her vision of animal-human hybrids might just be possible. Having pursued representational painting during the 1980s (bucking the abstract trend), she was heavily influenced by Renaissance portraiture. And while 16th century painters might have balked at her fantastical subject matter, they certainly would have appreciated her skill and attention to detail. Sundsten died earlier this year from complications from lymphoma. Hall Spassov Gallery has organized a special short-term retrospective of her work at a temporary but light-filled and lovely space. To walk through the show is to be struck by Sundsten’s persistence of vision. –B.D.

Jane Monheit’s voice can be like a massage with velvet gloves, or a jazzy romp through a garden of standards. The singer, a genial Long Island native, returns to Jazz Alley with her trio for a set of burnished renditions of ballads and uptempo tunes. You can expect Monheit to deliver a few she covered in her most recent album, The Songbook Sessions: Ella Fitzgerald. The collection includes such favorites from the First Lady of Song (an obvious influence on Monheit) as “Something’s Gotta Give,” “Where or When” and Cole Porter’s slinky “I’ve Got You Under My Skin.” –M.B.

“Wrestling is like a religion to me. Every Sunday we’d go to Mass, and then we went to lucha libre,” says Cassandro El Exotico. “And then of course, me being gay, I loved the men.” A new documentary about this unconventional Mexican icon (known as “The Liberace of Lucha Libre”) offers an intimate look at the highly theatrical sport, from the perspective of a fighter who took it even further — via sparkly eyeshadow, pink thong unitards and high-flying hairdos. At age 49, Cassandro is facing a less than flexible body, but his attitude remains feisty as he looks back on how he made his own way into a traditionally macho sport and earned legions of unexpected fans in the process. –B.D.

Some music fans may only know Seattle native Ishmael Butler as one half of the two-man experimental hip-hop group Shabazz Palaces (with Tendai “Baba” Maraire). But others remember Butler by the nickname “Butterfly,” when he was one of the three rappers in Digable Planets. This weekend Butler will take a momentary breather from Shabazz Palaces to rejoin forces for a Seattle show with his Digable Planets co-founders, Mariana “Ladybug Mecca” Vieira and Craig “Doodlebug” Irving. Admired as early innovators of jazz rap (see also: Gang Starr, Tribe Called Quest, De La Soul), Digable Planets reached peak popularity with their 1993 hit “Rebirth of Slick (Cool Like Dat).” But hip-hop heads will dig the deeper cuts from the 1994 cult classic Blowout Comb, a revolutionary work in sound and themes. Backing Digable is their all-star Seattle band Culprits, featuring funk/soul luminaries Thaddeus Turner (guitar), Gerald Turner (bass), Darrius Willrich (keys) and Conrad Real (drums).

You could call it breaking the stained-glass ceiling. For 63 years, the popular Sunday night “Compline” service at St. Mark’s Episcopal Cathedral on Capitol Hill has been sung by a men’s choir. People come from all walks of life to sit in the pews or lie on the floor and let the men’s haunting and harmonic voices wash over them. But not this month. In August, a specially assembled women’s choir is taking the do-re-mi reins. Less a feminist storming of the gates than an amassing of spiritual pinch hitters, the women’s Compline choir has been pulled together — for the first time ever at St. Mark’s — because the men’s choir is making a pilgrimage to England to sing in the cathedrals of Canterbury and Salisbury. Led by choir school director Rebekah Gilmore, the 18 women are highly accomplished singers, so here’s hoping they make such a melodic mark that they’ll be invited to alternate with the men’s choir upon its return. –B.D.

The Williams Project: “The Bar Plays”

From Cheers to Friends to Waitress, there are countless films and TV series set in the “third place,” that setting where everybody knows your name — or at least your standard breakfast, espresso or alcoholic beverage order. At a time when some of Seattle’s most beloved, unfranchised, least chi-chi local hangouts are disappearing because of skyrocketing rent and gentrification, the esteemed Williams Project ensemble is revisiting a pair of plays by legendary writers set in neighborhood pubs. Performed in rolling repertory, “Small Craft Warnings” by Tennessee Williams (the company’s namesake) and William Saroyan’s Pulitzer Prize winner “The Time of Your Life” are set in different cities, in different decades. But both works feature a gallery of outcasts and dreamers, who drop by a local watering hole for the drinks, the schmooze and the drama.

“The Time of Your Life,” Saroyan's 1939 classic, takes place in the Great Depression at a shabby saloon on the San Francisco waterfront based on a joint the author frequented. It’s packed with colorful characters, instilling a streak of wistfulness and hints of romance. “Small Craft Warnings” (which premiered in 1972) takes place in a coastal saloon, too, in 1960s Southern California. A montage of monologues by two dozen-plus characters — gay and straight, lonely and lost — the play is rarely produced and has had a critically mixed response. But we’ll see what The Williams Project crew, an intrepid troupe of eight actors reviving semiobscure works under Purcell’s thoughtful direction, makes of it in a production at Washington Hall, where you can also belly up to a real bar and get a drink. –M.B.

If you go: The Williams Project at Washington Hall through Aug. 25. Tickets are pay-as-you-will or $30-$50 donation.

The zany, retro-elegant dinner-circus-theater experience offered by Teatro ZinZanni has taken some detours lately. After a long spell on Mercer Street near Seattle Center, the whole shebang lost the space to park their atmospheric Belgian spiegeltent (cabaret tent) in Seattle, and moved across the water in 2017 to do a stint in Redmond’s Marymoor Park. Now the company is dishing up its four-course suppers — with generous sides of buffoonery, acrobatics, magic tricks, live music and ooh-la-la — in its new permanent home at the former site of the Red Hook Brewery in Woodinville, across the road from Chateau Ste. Michelle. Members of the rotating international repertory company of ZinZanni performers are in fine form in the Cascade foothills in their latest extravaganza, “Decadent Delights.”

The delights will be familiar to anyone who has been Zinzanni’d before, and a happy astonishment to those who haven’t (including the enchanted newbie I attended with recently), thanks to the delectable efforts of the current cast. The inimitable Kevin Kent has returned in Marie Antoinette drag (courtesy of brilliant costume designer Beaver Bauer) to pluck a shy but pliant, straight (in both senses of the word) guy from the audience for Kent’s sly and lusty interactive skits. The mysterioso, monocle-sporting Ukrainian magician Voronin is also back, with a charming sidekick: his light-fingered son Maxim Voronin. Among the other comrades in cavorting are Die Maiers, the German comedy-trapeze couple. (Sabine Maier’s sullen, deadpan waitress act is an unflinching wonder.) And the hostess Madame Zinzanni in this cast is the voluptuous belter Maiya Sykes, a veteran backup singer who sounds darn swell in the spotlight. –M.B.

If you go: Teatro ZinZanni in Woodinville, through Sept. 8. Prices start at $99 (including dinner).

Fresh art is sprouting like zucchini all over the city, so consider building an urban exploration around one or two of these new installations by Seattle artists. On First Hill, local light sculptor Dylan Neuwirth has created a striking new neon work, “All My Friends,” outside the still-under-construction Museum of Museums. In the downtown core, Juliana Kang Robinson’s new piece “Alone Together” features colorful graphic street paintings and signage (look for bears and a narwhal against a bright blue background) depicting a Korean creation myth about finding refuge in togetherness. And for the Seattle Center Sculpture Walk, several artists have created new work, including cut-paper wizard Katie Miller, whose sailcloth pieces are casting cool shadows across the Monorail overpass; ceramicist Carolina Silva, who branched out into Mylar ribbons to create the sparkling and whispery “Wind Trap” at Founders Court; and sculptor Henry Jackson-Spieker, whose wooden “Burl” clings to a column like a giant barnacle (also at Founders Court). Time to put on sensible shoes and create your own art walk. –B.D.

If you go: “All My Friends” by Dylan Neuwirth, outside the Museum of Museums on Broadway at Marion. “Alone Together” by Juliana Kang Robinson at First Avenue and University Street, near the top of the Harbor Steps. Seattle Center Sculpture Walk (through January), across the grounds. (All free.) 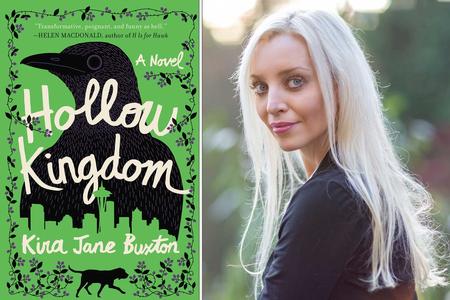 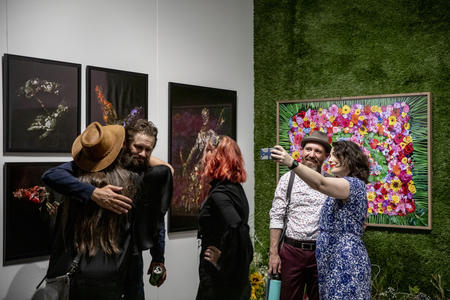 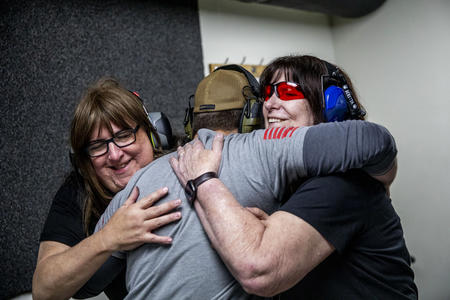