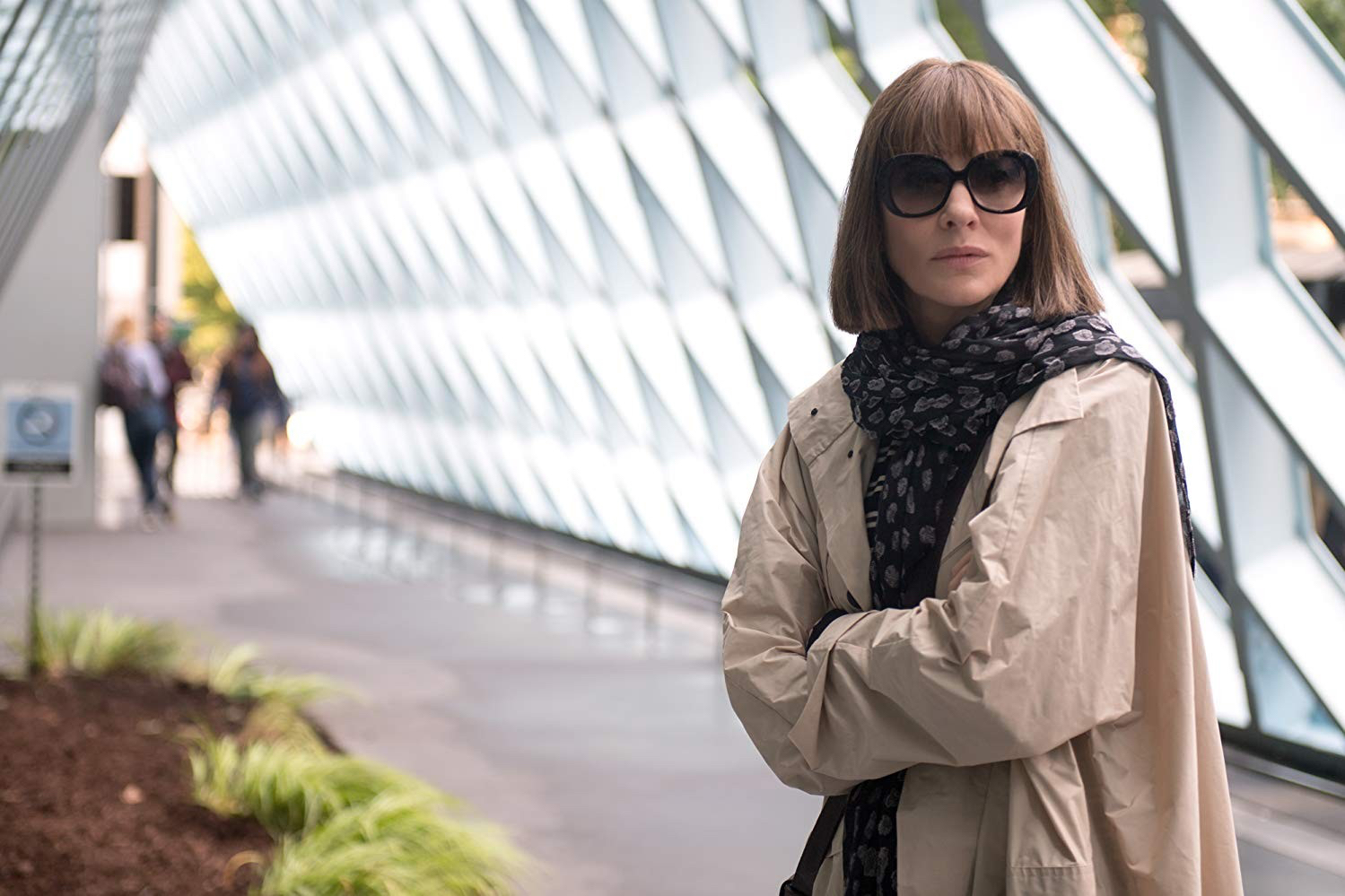 ‘Where’d You Go, Bernadette,’ set in Seattle and based on local writer Maria Semple’s bestselling novel, opens in theaters this week. (Image courtesy of Annapurna Pictures)

Right about now, fans of the very funny Seattle-set novel Where’d You Go, Bernadette are worried. The movie based on the book is coming out, but can it possibly be as good? It certainly has several things going for it: Cate Blanchett plays Bernadette, the titular architect having a major meltdown; director Richard Linklater knows his way around a comedy; plus supporting players like Kristen Wiig and Laurence Fishburne. Not to mention the source material — local writer Maria Semple’s book — which fondly skewers a certain Seattle population. (“It’s like a hypnotist put everyone from Seattle into a collective trance,” she writes, in Bernadette’s voice. “‘You are getting sleepy, when you wake up you will want to live only in a Craftsman house.…’”) Just be forewarned that aside from one scene inside the highly recognizable Seattle Public Library, the role of Seattle is played by frequent stand-in Vancouver, B.C., and a surprising new imposter, Pittsburgh. –B.D.

What image does the phrase “Native American art” bring to mind? For many, relics from the past come immediately to mind because of regressive stereotypes (cemented in no small part by the staged photography of Edward S. Curtis). The Native American Art History Lecture Series at the Frye Art Museum is an effort to help dispel this misconception by inviting contemporary Native American and First Nations artists to talk about their work and process. This year’s series focuses on indigenous women artists. It kicks off tomorrow night with Marianne Nicolson, a multimedia artist in the Dzawada'enuxw nation of the Vancouver, B.C., region. In Seattle, her work was most recently seen in Seattle Art Museum’s Double Exposure exhibit, where her large glass and light sculpture responded to the notion of borders, specifically referencing the Peace Arch. In the coming months the Frye welcomes Marie Watt, Asia Tail, Merritt Johnson and Wanda Nanibush — a truly impressive lineup that proves the point of the series: Native American art is happening now, all around us. –B.D.

Once the purview of children — generations of whom have spent summer days decorating concrete slabs with rainbow-colored sticks — sidewalk chalk art is now a global art form, practiced by adults of all kinds. During this third annual festival, Redmond hosts a bevy of “internationally, nationally and regionally” renowned chalk artists, who will practice their often elaborate craft on the streets of Redmond Town Center. The chalkmeisters will create “live, progressive street murals” as you watch, while bands play live and local merchants hawk their wares in sidewalk sales. Kids are encouraged to get in on the action, too, given free rein (and chalk) in the designated chalk garden. Of course, the chalk art isn’t for sale. It is ephemeral, evanescent and soon to vanish in a cloud of colorful dust, so dig it while you can. –M.B.

Bo Diddley. Patti Smith. Hank Williams. John Coltrane. These artists aren’t usually classified in the same entertainment slot. But they’ve all had the blues, musically speaking. And their soulful tunes will be heard this week at the seventh annual Columbia City Blues Festival at the Royal Room. This year’s one-night-only edition is titled, “Who Do You Love?,” after the eerie Bo Diddley hit from 1956. Local performers will pay tribute to Diddley and the other featured artists in a performance in line with several other recent musical homages hosted by the happening Columbia City nightspot. And gender is no obstacle: Amanda Winterhalter plays country titan Hank Williams; Leslie Brahly portrays ageless rocker Patti Smith; Kate Olson channels jazz avatar John Coltrane; and all will be accompanied by the house trio of Abbie Blackwell, Eric Eagle and Darren Loucas. Reservations are advised, and arrive early for the best seats. –M.B.

Ink is the medium and skin is the canvas at this weekend’s Seattle Tattoo Expo, now in its 18th year. If you’ve been itching for some fresh ink, look no further — and if you’re still on the fence, this could be your make-or-break moment. More than 200 tattoo artists from Alaska to Florida (plus some international artists) will showcase their proficiency in the fundamentals, as well as their finely honed personal styles. Only the best, most talented artists are invited to exhibit at the Seattle Tattoo Expo, so expect to be wowed. In between gawking at skin art from color-saturated flowers to photo-realistic Egyptian coffins to the latest in face tattoos, attendees can pause for live music, stand-up comedy by Chris Mejla and a burlesque performance from Seattle’s own Atomic Bombshells. For $10, tattooed participants can enter themselves in daily contests, and have their ink judged on stage. Twelve contest divisions are spread out over three days and include portraits, American Traditional, overall best and (no regrets!) worst tattoo. –Agueda Pacheco Flores

If you start noticing an influx of interesting installations around town, there’s a reason: the Seattle Design Festival is back for the ninth year, bringing with it big bold ideas about how to make the city (and maybe the world) a more livable space. This year’s theme is “balance” — and, boy, do we need some. With 100-plus art installations, films, discussions and the ever-popular interactive block party (held for the first time in Lake Union Park), architects, graphic designers, artists and urbanists will test out ideas for achieving more balance across all aspects of society. This weekend, watch for new Design in the Parks installations in Lake Union Park, plus the first-ever design crawls across Capitol Hill (including a movie about the "Ramps to Nowhere") and Georgetown (offering an open studio with artful disruptors Electric Coffin). –B.D.

Invasion of the Body Snatchers

Have you ever had that clammy feeling of, no, you’re not paranoid — they’re really after you? Invasion of the Body Snatchers, the 1956 film, gets a rare big-screen run this week at The Beacon, a welcome new independent movie theater on Rainier Avenue in Columbia City that screens blasts from the past, as well as more recent films. (Read Crosscut's story on the founders.) Shot in the the Cold War era, this sci-fi-horror classic seems right in tune with today’s unsettling, conspiracy theory-besotted times. Kevin McCarthy stars as a small-town California doctor whose patients are freaking out at the transformation of their loved ones, who look just as they used to, but have become heartless husks of their former selves. Could these, well, deplorables actually be pod people, seeded and planted here by aliens? What can the good doctor do to save the world from their dastardly inhumanity? Is it already too late? The movie can be read as an allegory for blind mass conformity, or as a cry against brainwashing, be it Communist or McCarthyite. Film historians have interpreted the movie in numerous ways, but all agree it’s a suspenseful nightmare shrouding middle-class America in the gloomy blacks and grays of film noir. –M.B. 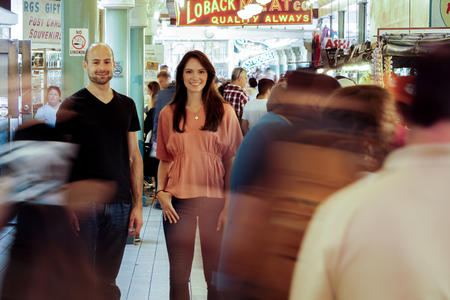 Swipeless in Seattle? 'The microbrewery of dating apps' aims to fix your love life

But can apps that promote community and dogs really thaw the Seattle Freeze?

Swipeless in Seattle? 'The microbrewery of dating apps' aims to fix your love life

But can apps that promote community and dogs really thaw the Seattle Freeze?