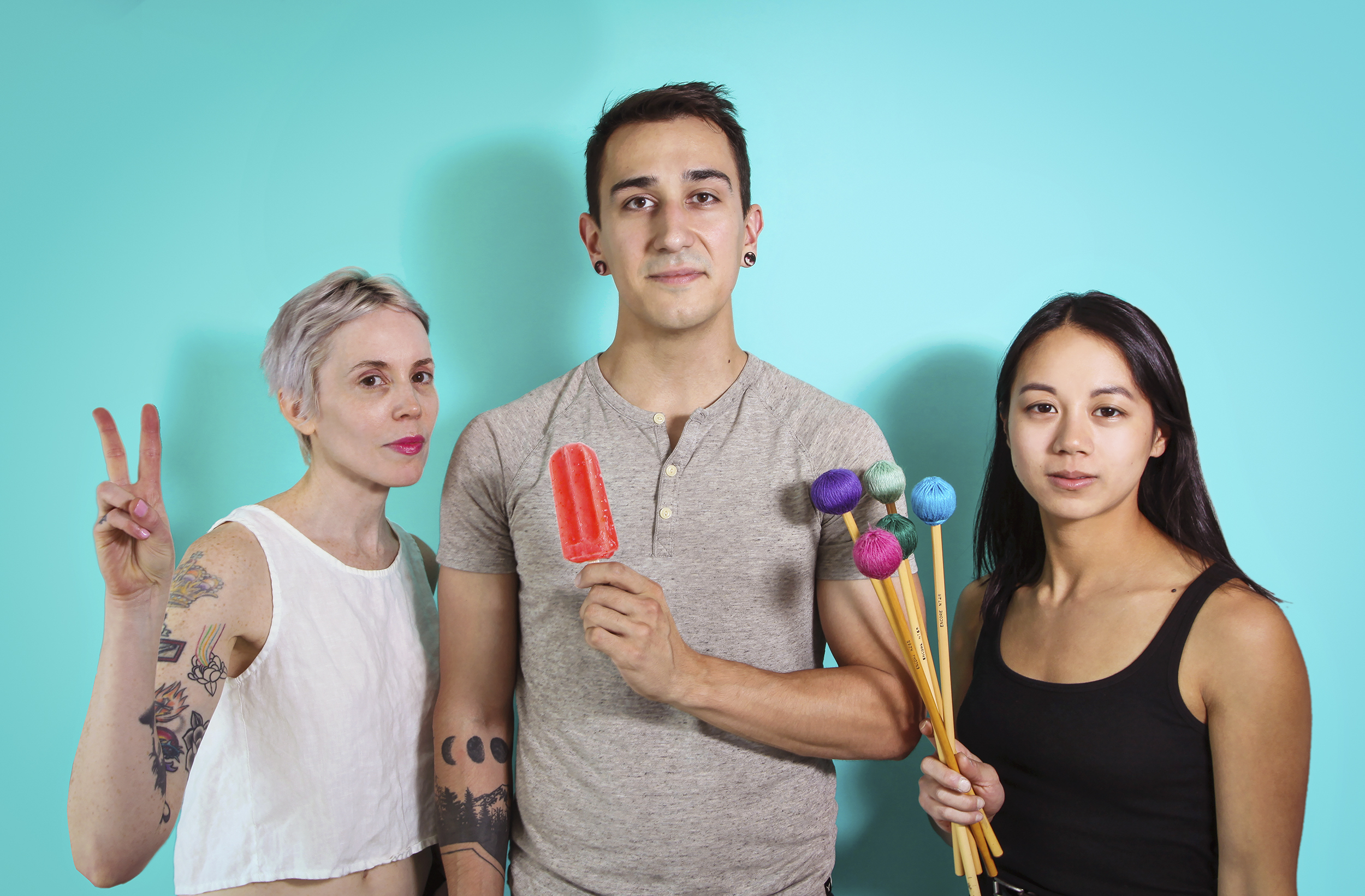 Three of six mallet masters who will perform marimba and vibraphone pieces in the ‘Good Vibes Only’ show at Washington Hall. From left: Erin Jorgensen, Storm Benjamin and Rebekah Ko. (Photo by Kelly O, courtesy of Good Vibes Only.)

Do you know your idiophones? That’s the term for musical instruments that produce sound via vibration. “Struck idiophones” are those that come alive upon being hit with a mallet — such as marimbas and vibraphones (the former featuring wooden bars, the latter metal). While these two examples may look like giant xylophones, the sound they create is deep and transportive. Seattle idiophonophiles have the rare chance to experience this pure percussive power in Good Vibes Only, a marimba and vibraphone concert organized by Seattle mallet maven Erin Jorgensen. She’s joined for the performance by a group of prominent Northwest marimba and vibes players (including, clockwise from lower left in the video above, Melanie Sehman, Storm Benjamin, Rebekah Ko and Erin Jorgensen). They’ll be tackling (among other modern minimalist works on the bill) legendary composer Steve Reich’s extremely challenging “Mallet Quartet.” The 16-minute piece requires the players (two marimbas, two vibraphones) to play the same quick series of staccato notes for measures upon measures with only slight variation.

In rehearsal last week, musician Sehman said she uses the mental image of a basketball shot clock to keep track of how many measures she has left. “But there’s pleasure in the repetition,” she said, “because when you repeat something enough, the smallest change makes a huge difference.” Ko agreed, saying there’s a thrill in such stripped-down works. “Every phrase is like a puzzle,” she said. “There's a lot of uncertainty about how we'll fit together because we don’t know if we’re all in the same place until we hit the shift. But it’s so satisfying to the ear when we all change together.” Prepare for a mesmerizing ride. –B.D.

Last weekend saw the inaugural “Thing” music and arts festival, conceived in the quirky vibe of the original Bumbershoot — the latter of which celebrates its 49th anniversary this weekend. Crosscut arts reporter Agueda Pacheco Flores attended Thing (which took place at historic Fort Worden State Park in Port Townsend), and says the fest delivered on founder Adam Zacks’ promise to be less about splashy headlining bands, more about cheering for the underdog (read our interview). “It was more like a small-town county fair,” says Pacheco Flores. “Instead of gasping for air, like at some packed music festivals, the spread-out stages and Salish Sea breezes kept things mellow.” Another difference: because of spotty cell service at the fort, the crowd largely abandoned selfies for an “unintentional digital detox.” That won’t likely be the case at this weekend’s Bumbershoot, where the Instagram vibe will be strong among the crowds awaiting Northwest bands such as Sol (feel-good hip-hop), The Dip (rock with a retro sound), Tourist Company (electronica with a sweeping Aha vibe), Y La Bamba (ranchera-inflected indie-folk) and *** i///u (the copyeditor-confounding neo-soul jazz band that won the Sound Off competition earlier this year). Rock on! –B.D.

So you’ve been to the Olympic Sculpture Park and now you’re looking for something a little more DIY. Something that combines the environmental instincts of Andy Goldsworthy with the bulky engineering of Stonehenge. Maybe even something at an elusive Whidbey Island location that’s open to the public only twice a year. You are in luck! Cloudstone Sculpture Park, in Freeland on Whidbey Island, is a 15-acre collection of hundreds of works by octogenarian sculptor Hank Nelson. Mostly self-taught (outside some stone-carving tutelage in Italy and a stint at the University of Washington’s iron foundry), Nelson works in carved stone, cast bronze, cast iron, steel, found materials and earthworks. (His sculptures can also be seen in front of the Langley Visitors Center and at the Evergreen Arboretum and Gardens in Everett.) Nelson’s remarkable range of work reflects styles from cubism to abstract modernism to folk art. Taking advantage of this rare open weekend to walk the grounds and experience his unusual vision is an excellent option for sending summer off into the horizon. –B.D.

Preston Singletary: Raven and the Box of Daylight

World renowned glass artist Preston Singletary (Tlingit) has an alchemist’s ability to take inspiration in traditional Native American crafts (baskets, carvings, masks, canoes, hats) and turn them into masterpieces of blown glass. His remarkable skills are confirmed and celebrated in this expansive exhibit, in which Singletary showcases his gift through the lens of the Tlingit legend of the Raven — a bird said to have brought light to the world via the sun, moon and stars. Like Raven, Singletary seems to possess the ability to manipulate light itself, capturing it in glass baskets, birds, human figures and totems, all of which seem to glow from within against the black walls of the gallery. Dreamy video projections and immersive audio (including storytelling, bird calls, nature sounds and music) lend a theatrical vibe and provide context and history for the objects in a manner far more captivating than the average museum plaque. Crosscut’s own Knute “Mossback” Berger recently saw the show and offered this review: “A stunning, luminous and numinous recreation of Raven and light myth of the Tlingit in glass objects,” he said. “I came out thinking, ‘Chihuly who?’” –B.D.

Colleen Echohawk and Ben Franz-Knight: Intersections and Opportunities for Designing with Indigenous Knowledge

“We’re in one of the only major cities in the country named after a chief,” says Colleen Echohawk. “But we have very little representation of Native architecture and design in our city. That sends a message to a whole community.” Echohawk, executive director of the Chief Seattle Club (which provides food, medical and social services to local indigenous people), was speaking earlier this summer on Seattle Channel’s “City Inside/Out” program about the club’s $38 million expansion project in Pioneer Square. The new building (groundbreaking is set to happen in November) will be seven stories tall, with a public-facing cafe on the ground floor and 80 low-income housing units above. “Our project will look and feel like a Native building from the outside to the inside,” she said on the show. For this month’s Town Hall discussion, she’ll speak with urban planner Ben Franz-Knight, former executive director of Pike Place Market, about how white privilege has dominated architecture and design, and what the possibilities might be for a space that better represents the community that lived here long before settlers arrived. (An idea similar to that espoused by the Africatown project, which encourages people to “imagine Black architecture” in the Central District.) Echohawk has lots of ideas — from renaming area streets in the Coast Salish language to adding more Native sculpture and artwork to the public cityscape — and the discussion should be fascinating and thought provoking. –B.D.

Last chance to catch these shows!

Beili Liu: Each and Every

The polished concrete floor at MadArt Studio in South Lake Union is covered by carefully laid out children’s clothing. But there’s something odd about the garments: they appear to be made of papier-mâché — all are light gray and seem to float just an inch or two off the ground. This startling installation is the work of Austin, Texas-based artist Beili Liu, who created Each and Every as a response to the immigration tragedy taking place at the U.S./Mexico border. After collecting donated children’s clothing, Liu began dipping each item in a solution of cement that causes the clothes to stiffen but retain their essential form. It also gives them a sense of weight that serves as a metaphor for the impact on so many young lives. Above the clothing, countless cotton threads hang like rain, or arrows that simultaneously direct our attention downward, toward the missing children, and upward, as if searching the sky for answers. Liu will perform several times during the installation, sewing ripped children’s clothes to make them whole again — a small domestic offering of a mother’s labor. (Read our full story.) –B.D.

Jane Wong: After Preparing the Altar, the Ghosts Feast Feverishly

A gleaming golden table is laid out with Chinese restaurant bowls — each emblazoned with a poetic fragment (“we woke to something boiling,” “and ate that and one of your lost flip flops too”). Above it, plastic takeout bags hang like specters, some empty, some full of memories. Seattle poet Jane Wong is known for visceral writing that reflects the Asian American experience, both writ large and through her personal lens. For her first solo exhibit, she creates a similarly chewy pageant. After Preparing the Altar, the Ghosts Feast Feverishly honors her mother’s family, who experienced extreme hunger and poverty during the Great Famine, and contrasts their experience with the gluttony and abundance of her childhood, as she was raised in a Chinese restaurant in New Jersey. Through old photographs, poems, Chinese iconography and the stunning central altar, Wong makes a meaty offering of reconciliation. –B.D.

If you go: Frye Art Museum through Sept. 1. (Free)

A Queen Within: Adorned Archetypes

If you’ve always wished you could mingle among the fashion glitterati at the Met Gala in New York City, take heart: MoPOP has brought the highest-heeled echelons of couture straight to us left-coasters. A Queen Within: Adorned Archetypes arrives via the New Orleans Museum of Art, which developed the show around six “feminine archetypes” (which perhaps unintentionally establish a sense of “choose your own adventure”): sage, enchantress, explorer, Mother Earth, heroine and thespian. In a more obvious connection to queens, the show highlights rare pieces by designer Alexander McQueen, amplified by some 100 exquisite gowns, headpieces, wigs, shoes and jewelry by the likes of Gucci, Prada, Chanel, Comme des Garcons. Whether you’re in it for the feathers, florals, sequins or sheer silliness, this realm of fashion is undeniably fun. (Read our MoPOP vs. MOHAI fashion smackdown.) –B.D.

Like many cities across the globe, Seattle has ignited plenty of excitement and events for the 50th anniversary of the moon landing this summer (even a black hole has shown up for the occasion). The Museum of Flight is celebrating with a new exhibit, Destination Moon: The Apollo 11 Mission, featuring the actual command module (Columbia) that landed on the moon in July 1969. Seattle marks the touring show’s only West Coast appearance, and the museum has amped up the content with its own artifacts from the Space Race, including a cosmonaut suit, a Sputnik satellite, and items from the Seattle engineers involved in the monumental achievement. Stay tuned for the museum’s big, moon-filled festival in July. –B.D. 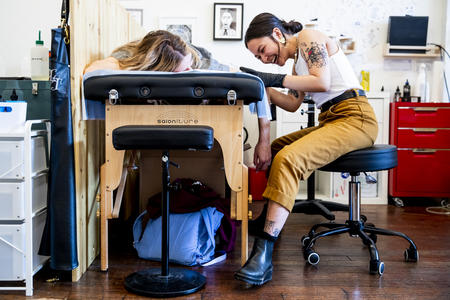 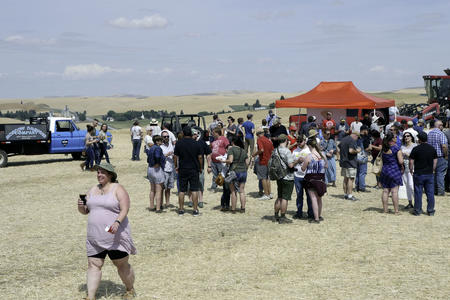