What would a Green New Deal for Seattle look like?

The city council and environmental advocates are resolving to tackle inequality and climate change at the local level. But with elections on the horizon, there are more questions than answers. 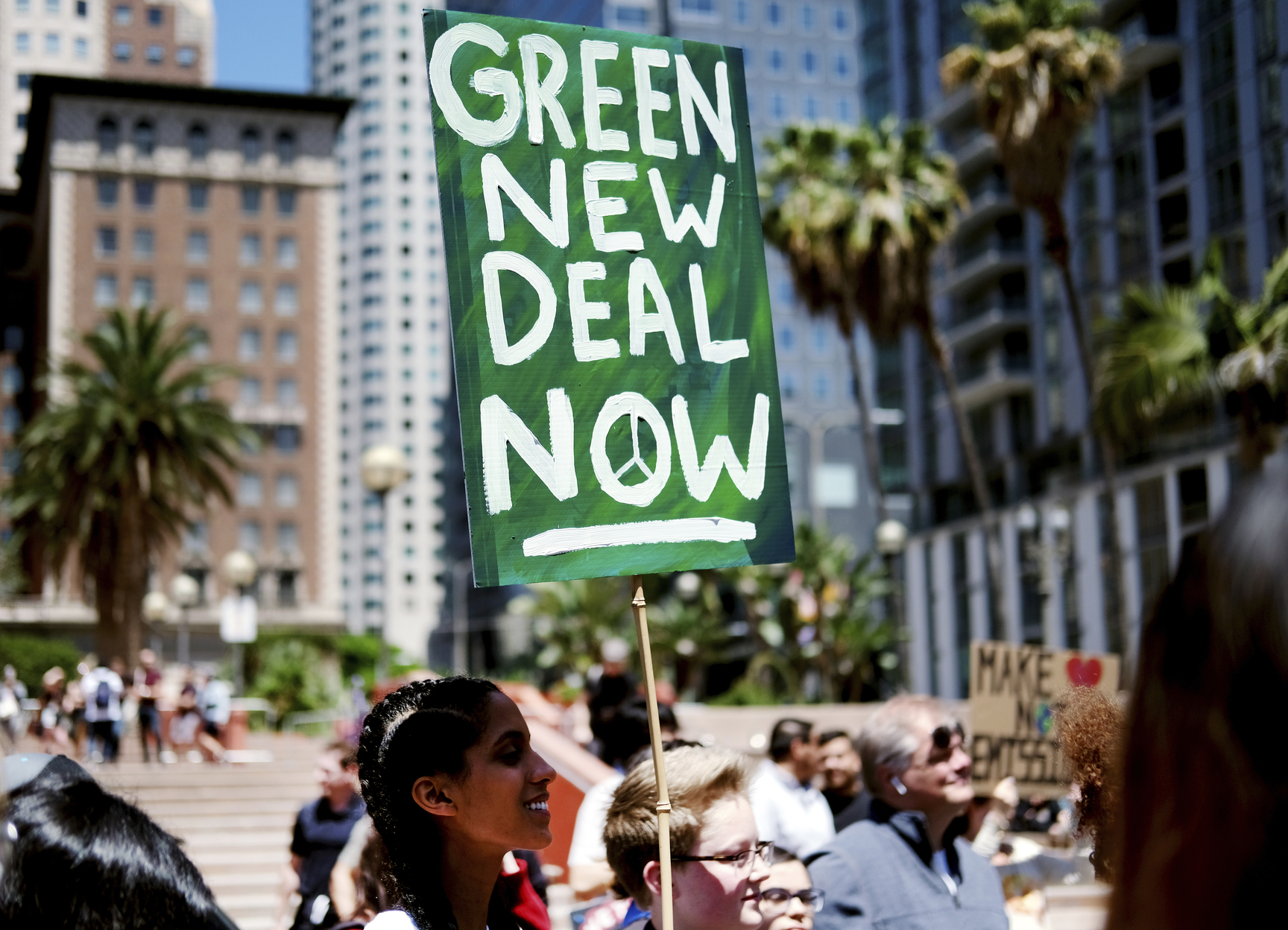 On June 24, the Seattle City Council signed a pledge committing to developing a Green New Deal after being approached by environmental advocacy groups Got Green and 350 Seattle. Other cities and states, such as New York and Maine, have signed on to local versions of the nationally prominent commitment to use public resources to tackle inequality and climate change. But with a new city council on the horizon locally, questions remain about what a Green New Deal for Seattle might look like.

At Tuesday’s meeting of the council's Sustainability and Transportation Committee, the first steps toward that reality were taken as environmental advocates and Councilmember Mike O'Brien, the committee's chair, discussed what an ordinance putting the promises of the Green New Deal into action would look like.

“I think we’re capable of that,” O’Brien said of implementing the Green New Deal. “Frankly, we have to be.”

The ordinance is still in its infancy, and since Green New Deals as applied to cities are a relatively new phenomenon, there’s not much of a roadmap to define what that means for Seattle. The city council will have a big role in shaping that.

With a primary election slated for Aug. 6, Got Green’s Nancy Huizar — who took part in the committee discussion — says that it’s critical for the incoming class of council members to support the initiative for it to survive. In a letter to city council, Got Green and 350 Seattle outlined their priorities for a local Green New Deal, including commitments to go carbon neutral by 2030, build greener city infrastructure and create more jobs in the renewable energy sector (among other initiatives). But the current council has yet to define what that means in terms of government action.

“A resolution is just the first step to saying we’re committed — there’s no action coming out of that,” Huizar says. “It’ll be really important to see where the new folks are at.”

Why call it a Green New Deal?

Since being introduced in Congress by Rep. Alexandria Ocasio-Cortez, D-New York, and Sen. Ed Markey, D-Massachusetts, just after 2018’s midterm elections, the term "Green New Deal" has come to encapsulate a host of environmental, social and economic goals for progressives around the country. While the legislation needed to support those goals can vary in scope and scale, depending on where it’s implemented, the environmental organization Sierra Club defines it loosely as mobilizing “vast public resources to help us transition from an economy built on exploitation and fossil fuels to one driven by dignified work and clean energy.” Other high priorities include specific calls to aid and support vulnerable communities during the transition, which could take years or even decades.

Critics call the plan overly ambitious, with some going so far as to call it a “needlessly long wish list of progressive economic policies,” but advocates say that it’s a necessary framework to quickly drive the systemic changes required to address the large-scale problems of climate change and economic inequality.

Of the more than 50 candidates running for council positions this year, fewer than a dozen explicitly listed a Green New Deal as a priority on their website. Many listed climate-related or environmental initiatives among their priorities, but the phrase “Green New Deal” wasn’t always present. For those that do list it, however, the phrase helps emphasize equity as a primary goal within the pre-existing framework to support environmental legislation.

“It’s a framing tool and we’ve had other framing tools,” District 4 candidate Cathy Tuttle says. “The difference with the Green New Deal in this particular go-round is that it’s putting equity front and center.”

District 2 candidate Tammy Morales says that while she has worked on affordable housing and increasing density in the city for years, she hadn’t considered her work environmental until talking to advocacy groups like Got Green.

“I always talk about my work as building healthy communities,” Morales says. “Now that we’re talking about these issues from this frame, it makes total sense to me.”

Huizar notes that many of the Green New Deal’s goals aren’t new: The communities she’s worked with through Got Green have been seeking changes listed under the Green New Deal for years. But placing them collectively under a new moniker has helped those communities and advocates emphasize an equitable approach when tackling environmental issues — and an opportunity to capitalize on national visibility.

“We’re using this moment to push the initiatives we’ve already tried to push in the past,” she says.

In defining the Green New Deal, candidates have explicitly tied it to issues Seattleites already think about, like transportation, housing and labor.

“The Green New Deal really is at the intersection of climate justice and our economy and workforce,” District 4 candidate Emily Myers says. That’s part of the reason she says she has focused on Seattle’s identity as a port city and its maritime workforce. Myers hopes to make the port run on electricity rather than diesel: “That’s going to create a lot of jobs in order to get that project done.”

Both District 4 candidate Shaun Scott and Tuttle say that holding big businesses like Amazon accountable for their carbon footprint is integral to moving the city away from carbon emissions.

On his website, Scott writes: “Our biggest corporations — Amazon, Boeing, Microsoft — also happen to be our biggest polluters … nothing but a lack of courage and political will is stopping us from enacting a new employee head tax, or from raising the B&O [business and occupation] tax on our largest corporations.”

“Amazon has to be front and center of any kind of Green New Deal we’re doing locally,” Tuttle adds. “They’re deeply embedded, [and] they better be strong GND [Green New Deal] players or it’s not going to work.”

District 2 candidate Christopher Peguero points to pre-existing initiatives, such as the city’s Equity and Environment Initiative, as building blocks complementary to instituting a Green New Deal in the city.

“If we create a Seattle Green New Deal, that can connect the dots between those equity programs and say here’s how we’re going to move this work forward,” he says. Doing so, he says, would also help make environmental equity a true priority.

The ordinance discussed in Tuesday’s committee meeting will return for discussion at the next meeting, on Aug. 6. Huizar says O’Brien and advocates will create a resolution on the Green New Deal and possibly put forward an ordinance for the full council to consider Aug. 12. She says the ordinance may include “some kind of funding mechanism for the Green New Deal, as well as an oversight committee.”

“Our communities have been working on a lot of this for a long time,” she says. “It’s not just rebranding the city process and [how] initiatives have gone. It’s changing the framework.”

Some at the committee meeting discussed the widely cited study that added urgency to the global climate change conversation in its finding that there are only a dozen years left to limit catastrophic impacts. Advocates at the meeting voiced hope that this urgency can be enough to help initiatives attached to the Green New Deal succeed where others have failed before. Seattle-based Lakota activist Matt Remle, who also spoke with the committee, says Councilmember O’Brien’s imminent departure makes it an interesting time for this ordinance. He and others had been talking to O’Brien for over a month about the Green New Deal prior to the committee meeting. Remle says he’s sad to see him leave.

“He’s been the environment guy on council for the past decade,” Remle says. He hopes that with an ordinance passed, it’ll be enough to get action from the city on a Green New Deal.

“A resolution is good, but that’s just a statement,” he says. “We want actual legislation that holds Seattle to these projected goals.”