Why the income tax revival is good for Republicans

The progressive dream of taxing income just got a shot in the arm from the Court of Appeals. Conservatives should celebrate, too. 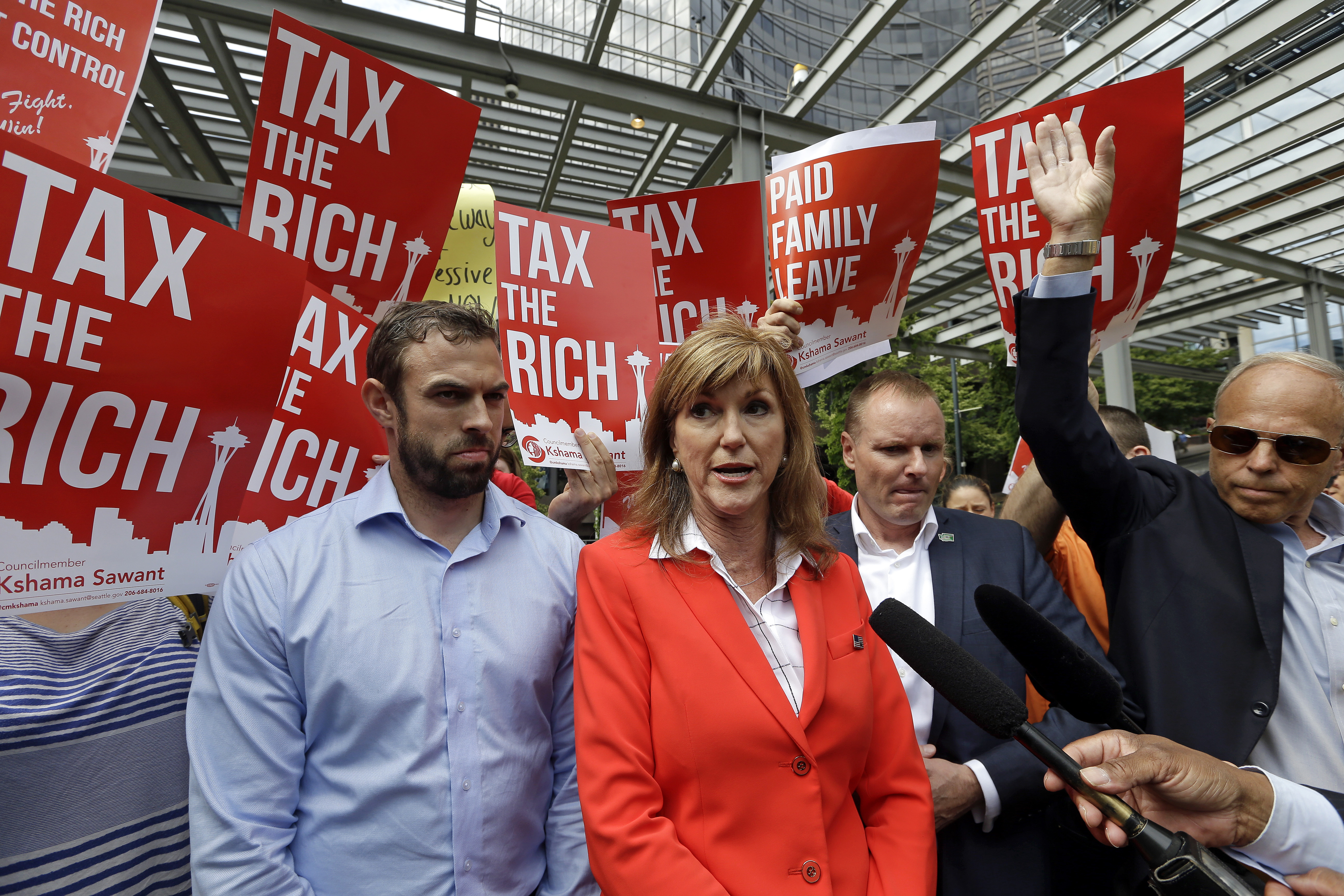 Democrats will be very happy if a recent state Court of Appeals decision allowing cities and counties to levy a flat-rate income tax remains in place. A progressive income tax has been an article of faith for the Democratic Party going back to the 1930s, but even getting authorization to tax income itself would be a huge step for party progressives.

But, politically speaking, the biggest beneficiaries would be Republicans.

Right now things are going well for Washington state Democrats. They hold a 28-21 majority in the state Senate and a comfortable 57-41 lead in the House. If things go better for Republicans in the next couple of cycles, they might trim that advantage, but winning a majority isn’t likely anytime soon.

Closer to home, the Democrats have a lock on King County Council, with a 6-3 majority. It’s true that the council is officially nonpartisan, but party allegiances are still maintained, especially during campaign season.

And at City Hall, the Seattle City Council is made up entirely of Democrats, ranging from liberals to left wingers and a socialist or two.

That dominance has driven the city council and the past two Democratic mayors, fully supported by Seattle legislators — the city has not elected a Republican to the Legislature in 35 years — to push for authorization to levy an income tax.

And they got a gift when, in July, the Court of Appeals ruled that there could be legal standing to tax income uniformly, as is the case with the retail sales tax. (The court did reiterate that the city couldn’t pass an income tax limited exclusively to wealthy people.)

The court got there by striking down a state law from the mid-’80s prohibiting any tax on income, and then went a step further by essentially asking the state Supreme Court to reconsider the longtime ban on progressive income taxes.

All this has left Democrats euphoric and Republicans dismayed, because Republicans are as philosophically opposed to an income tax as Democrats are for it.

But the future possibility of an income tax would do more to revive the Republican Party’s fortunes than anything since the Democrats nominated Jim McDermott for governor way back in 1980.

Some quick history. An income tax passed a vote of the people once, in 1932, in the depth of the Depression. It did so big time, with 70% of the vote. The state Supreme Court struck it down in 1933. A year later, it returned in the form of a constitutional amendment (House Joint Resolution 11). But this time it fell short, with only 43% of the vote. It has lost nine times since, in one form or another, usually with less than 35% of the vote. A 1982 initiative on corporate income earned only 34%.

After a 28-year spell, the income tax reappeared on the ballot with Initiative 1098 in 2010. It would have taxed the income of wealthy people (defined then as $400,000 per couple) while trimming property and business taxes a bit. It featured a popular spokesman, Bill Gates Sr., who cut a funny commercial showing him getting soaked in a dunk tank. In addition to featuring high profile endorsements, the campaign was well-organized and well-financed.

And this wasn’t one of those blue vs. red, Eastern vs Western Washington divisions. It lost 38 of 39 counties, prevailing only in tiny San Juan County by about half a percentage point. It got swamped everywhere else, usually by a 2-1 or even 3-1 ratio. It even fell hard in heavily blue King County, by nine points (54.5 to 45.5).

Now let’s return to the current makeup of the Legislature. There are 49 districts in Washington state. Democrats control 28 of them in the Senate, several of them precariously. When the income tax initiative last appeared on the ballot, it lost in 44 of them. Only five districts supported I-1098, all of them in Seattle.

Let’s suppose the income tax suddenly came into play. It would automatically become a front-burner issue because intensity for it is so strong on both sides. But that intensity is lopsided. Four Eastside districts all replaced Republican senators with Democrats in the past five years, from Redmond south through Bellevue, Mercer Island and the Kent-Auburn area. Those districts rejected the income tax initiative by an average of 66% of the vote.

Continue south to Federal Way’s 30th District, which also opted for a Democratic Senate candidate in the last election. Voters there also said “no” to I-1098, by 66% of the vote. Continue south to Pierce County, where Democrat Emily Randall barely brushed by Marty McClendon to win Gig Harbor-Bremerton’s 26th District Senate race. Voters there body slammed the income tax by 71.2% of the vote. Drive 45 minutes north of Seattle to the 44th District, in Snohomish-Lake Stevens, represented by Democrat Steve Hobbs; over 69% of the voters in this working-class district turned their thumbs down on levying an income tax on the wealthiest taxpayers.

That’s seven legislative districts less than an hour from Seattle that rejected an income tax by a 2-1 majority. Still other districts, closer to the city, voted against it in the high 50s to low 60s. If the income tax becomes a live issue, those Democrats will either stiff-arm their own party, or they would likely lose their seats, even more emphatically than Democrats lost in the 2014 midterms.

All of a sudden the Democrats have gone from a seven-vote majority to a seven-vote deficit — and that’s before we keep driving in both directions on the Interstate 5 corridor. The House would likely see similar changes.

You want to breathe new life into the Republican Party? Make the income tax a real possibility.

Even the King County Council could be up for grabs. For years, candidates that self-identity as Democrats controlled five of the nine seats on the council. Then Claudia Balducci, former mayor of Bellevue, replaced Jane Hague, in 2015, and made the de facto majority 6 to 3, with little prospect of a majority changing hands any time in the foreseeable future.

But the possibility of an income tax instantly changes that. Only three of the council’s nine districts voted for the income tax. If the possibility of a county income tax loomed, it would define the next campaign cycle. Suddenly Balducci, with her eyes on Dow Constantine’s job, would have an unenviable choice: defy Seattle — King County’s political establishment — or defy her constituents, who oppose the tax by a 2-1 ratio. Dave Upthegrove, who represents suburbs south of Seattle, would also have an uncomfortable choice to make. Ditto up north with Rod Dembowski. Nothing would change in the Seattle districts, but that’s not where the council majority would be decided.

And speaking of the Emerald City, the city council would pass an income tax (though, this time, maybe not unanimously), faithfully implementing the views of their constituents. But doing that merely makes an income tax a serious possibility in the cities surrounding Seattle. Suddenly the income tax becomes a defining issue in places like Kirkland and Lake Forest Park. A whole new generation of candidates, motivated by the changed political landscape, would likely be drawn into politics.

So, yes, there is a definite upside for Seattle’s politicians and activists if the income tax becomes real. The consolation for Republicans is that it also becomes an issue in the 90% of the state, outside the city, that opposes it.