Would my grandparents have made it to the U.S. under Trump’s immigration policy?

New visa and green card rules proposed by the Trump administration threaten the core of who we are. 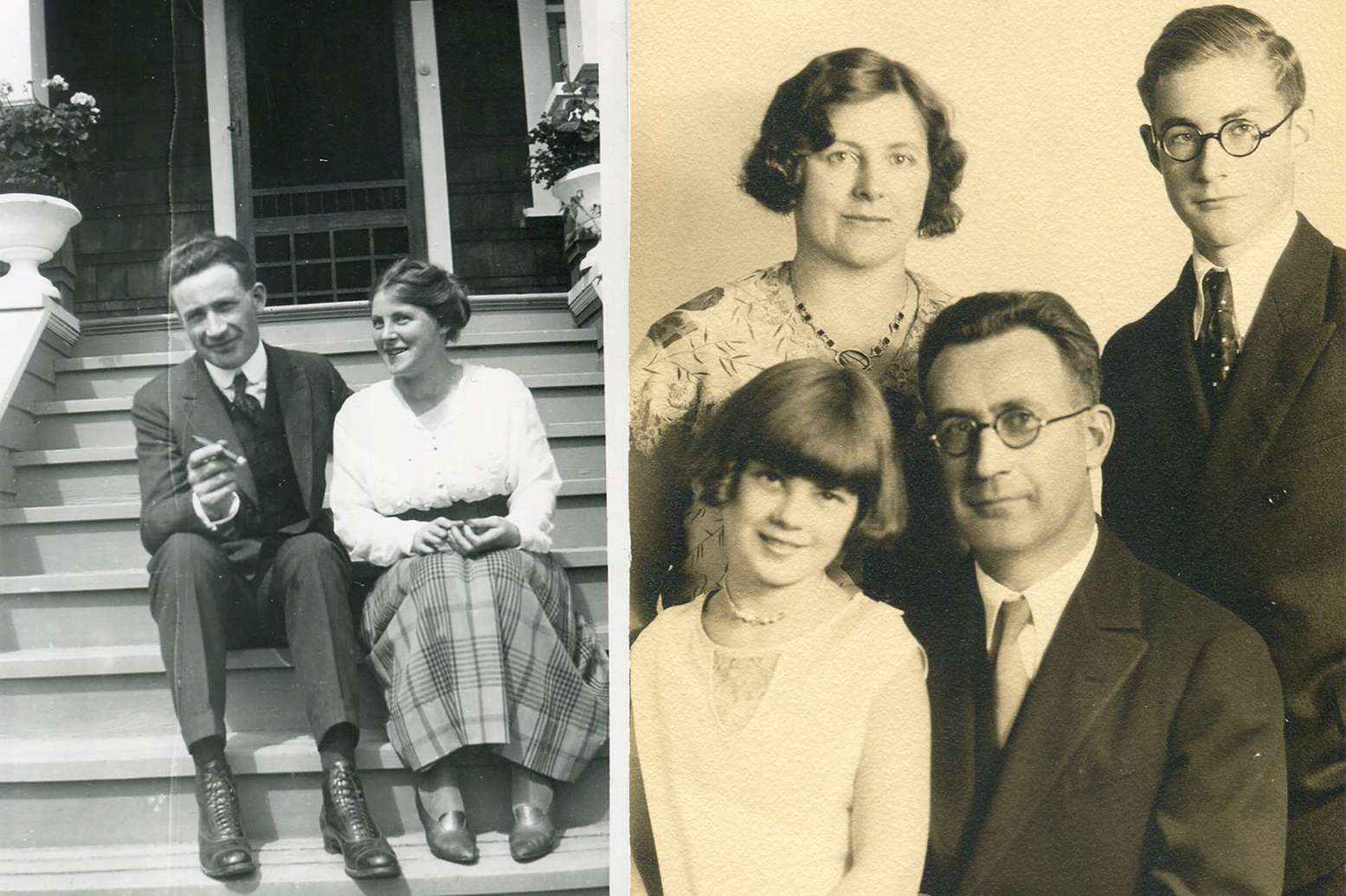 Left: The writer's grandparents on a front stoop in Seattle during their early years. Right: The writer's Aunt Barbara, bottom left, his grandmother Thomasina, his grandfather Knute Berger, and, top right, his father, Knute E. Berger.

The history of the United States is, in large part, a history of immigrants. The Trump administration’s attempt to rewrite immigration, green card and visa rules challenges us to own our immigrant roots. Those of us of European heritage are all immigrants, genetically speaking. Some try to avoid this reality, like far-right commentator Ann Coulter, who has insisted she descended from “settlers,” not immigrants. There is deep denial about where those settlers came from, that they fled their home countries often as political or religious refugees, or to escape enduring poverty. This used to be a point of “Pilgrim’s pride,” but is papered over these days by prejudice and selective memory.

My paternal grandparents were both immigrants. Recently, I was asked to participate in the National Nordic Museum’s oral history project and share my family history. Volunteers at the Ballard museum have recorded some 800 video interviews with people of Nordic descent, gathering history and personal stories.

There is enormous value in recording these histories, in asking those of us descended from immigrants to step into their shoes, to remember that those currently caged at the border, refugees and asylum seekers “yearning to breathe free,” legal and undocumented immigrants — are not “others,” but people with whom we share common roots. An American strength is now being touted as an Achilles heel. Remember when we prided ourselves on the idea that people wanted to come to the United States to escape walls?

In preparing for my oral history interview, I dug into family records and found documents detailing my grandparents’ journey. My Norwegian grandfather — we called him Bestafar — and my Scottish grandmother — she was Granny — met in British Columbia.

My grandfather came to the U.S. in his early 20s, having trained in school as a mechanical engineer. He arrived in 1911 and found work in Alaska and later in British Columbia as an engineer on a wealthy Canadian’s yacht. My Granny was a maid on the same boat. Her family had landed in the Vancouver area after fleeing poverty in a small fishing village in northern Scotland. Theirs was a family of women and girls: Granny’s father, a fisherman, had drowned in the North Sea during a storm, along with many other men in the village, leaving his wife and four daughters bereft and poor. Granny eventually followed her sisters to Canada in an act of what some might call “chain” migration.

My grandparents came to the United States with virtually nothing, seeking a better life. Bestafar wanted to be an American and married my grandmother in Vancouver, in 1914, and soon moved south, where he stayed for good.

They arrived in Seattle from Canada that fall, and shortly thereafter, my father was born. He was instantly an American citizen — an anchor baby born in Mrs. Mote’s rooming house on Capitol Hill near 12th Avenue and Pine Street. Bestafar wanted to be in America because it was the so-called land of opportunity. But he and Granny struggled. In their early days, they fought over who was going to eat a single egg every morning, each encouraging the other to take it. As a child, my father endured complications from malnutrition and at one point suffered from rickets. In adulthood, he could not stand the sight of oatmeal; he’d eaten a single bowl every day to last him both for breakfast and lunch throughout his childhood.

After five years in Seattle, my grandfather filed papers indicating his intention to become a naturalized citizen. He was patriotic. He had tried to volunteer for service in World War I, but was denied because he wasn’t yet a citizen. In going over his papers, immigration officials did not ask if he was rich or poor. He had to pledge fealty to both the state and to monogamy, and swear he was not an anarchist: “I am not a disbeliever in or opposed to organized government,” read his naturalization form, “or a member of or affiliated with any organization or body of persons teaching disbelief in or opposed to organized government. I am not a polygamist nor a believer in the practice of polygamy. I am attached to the principles of the Constitution of the United States.” He also had to renounce any loyalty to foreign governments or leaders, especially King Haakan VII of Norway. He had no trouble doing so.

The bar to citizenship wasn’t terribly high for white Europeans like my grandfather. But he did encounter ethnic prejudice. His surname in Norway was Olsson, but both he and his brother changed their last name to Berger when they came to this country. Family lore has it that the change was due to a widespread bias against “Dumb Swedes,” a designation they wanted nothing to do with. It seems funny now given Seattle’s large Scandinavian immigrant community, but such ethnic prejudices were real.

He worked hard to assimilate and succeed in business. He worked on steam engines and boilers, later becoming chief engineer of the Washington Iron Works, then founding his own company on Harbor Island, which made logging and marine equipment. By the 1940s, he was accepted into the Rainier Club, a sign of establishment success. In his club application it was noted: “Has congenial personality. Is sober and industrious. Speaks English without marked accent.” Shedding one’s immigrant and ethnic past was part of the price of the success he sought.

Trump has said that he’d like to see more immigrants from Norway. We are now told by Trump’s head of Immigration, Ken Cuccinelli, that the sonnet which appears on the Statue of Liberty exulting to the world, Give me your tired, your poor / Your huddled masses should be amended to read, “Give me your tired and your poor who can stand on their own two feet and who will not become a public charge.” The goal is to make it harder for people to obtain green cards or visas by cutting off access to programs like food stamps or Medicaid. People can be turned down for having low education or for being poor.

It’s true that the poem on the statue is not law, but it is a spirit that has animated the country. While my grandfather might have been allowed in under such rules, my grandmother might well have not. The door could have been slammed shut before they were given a chance to stand on their own. And while there was no social safety net back then, we have seen the benefits of having one. All those Norwegians the president would like to see coming, they helped invent the welfare system in their home country – and which he is trying to dismantle here at home. If he knew, he might rescind the invitation.

The problem of “America First” is that it is turning a generous nation into a selfish one. Today’s “firsters” are attempting to preserve a white-dominated nation with racist principles, rather than welcome a more diverse one in a humane, orderly way. Their political leadership is attempting to use walls, cages and razor wire to counter the “breathe free” ethic by instilling fear among those who would come, and those who have already safely arrived.

We must not forget that many of us who share an immigrant ancestry wouldn’t be here under the rules being implemented today. It is our responsibility to resist the sweeping, exclusionary white nationalism attacking this nation’s very core, refusing to acknowledge who we are and what we can still become.