Adrift and afraid, Seattle's outraged NIMBY needs someone to blame

Local PACs People for Seattle and Moms for Seattle are fueling a toxic politics and exploiting anxiety about a precarious economy and a confusing world. 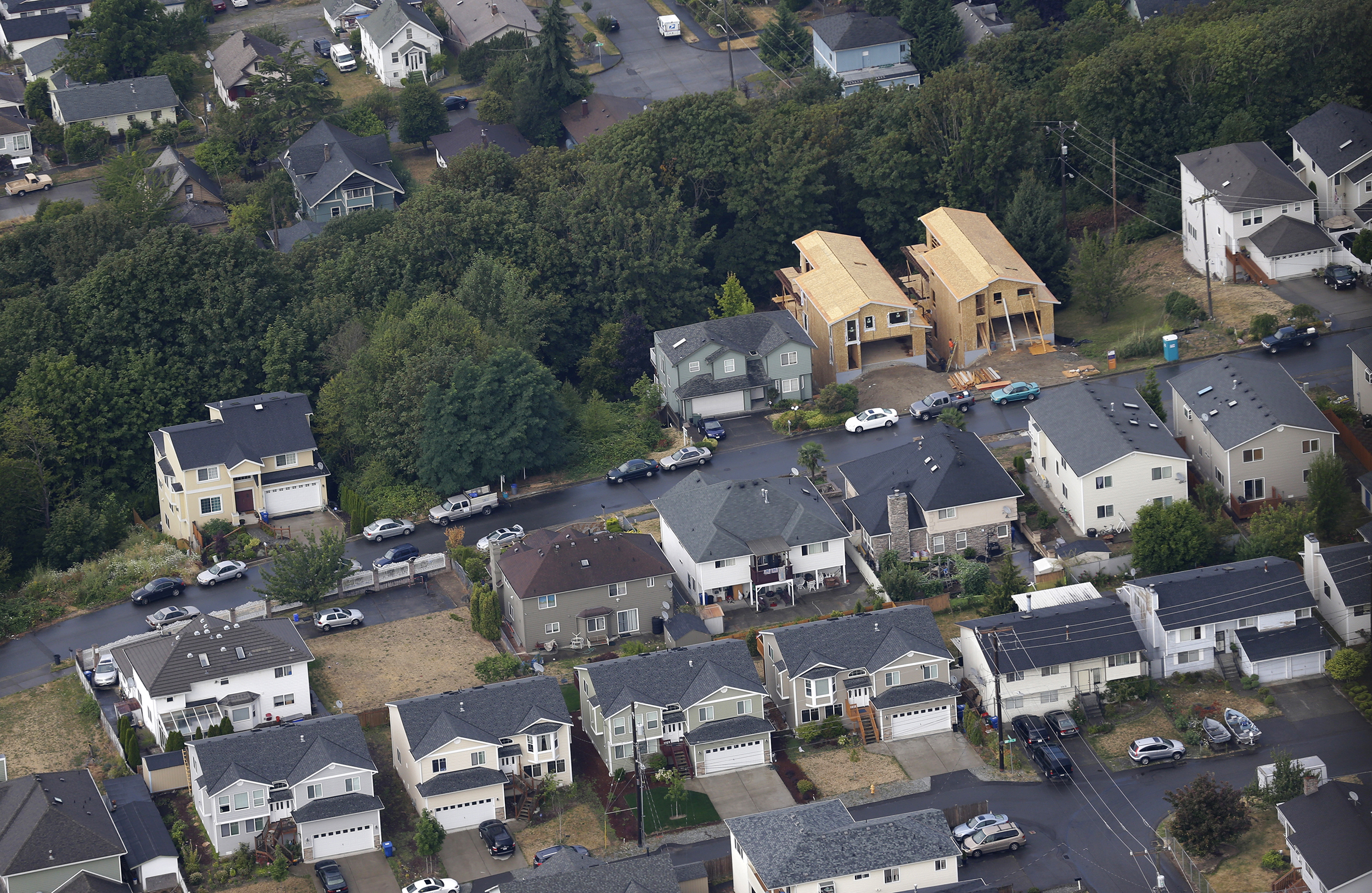 In this aerial photo taken Aug. 2, 2014, two houses are shown under construction in a Seattle neighborhood. (Ted S. Warren/AP)

It’s about to get ugly out there.

We’re entering the long final lap of this year’s Seattle City Council elections. If it’s anything like the run-up to the August primary, the fans on the sidelines will do less cheering on their favorites than booing their opponents — and some will have louder megaphones than others. Political action committees like the innocuous-sounding People for Seattle and Moms for Seattle spent July flooding the city with misleading claims and manipulated images evoking the heady days of 2018, when it seemed all of Seattle was at each other’s throats over the “head tax,” and the homelessness debate reached a vitriolic fever pitch. This fall we can expect to be inundated once more by focus group-tested, consultant-approved advertisements and mailers designed to manipulate our emotions and sway our votes. So maybe this is a good time to take a look, albeit speculatively, at some of the psychic forces at play.

As someone who sat on stage during the infamous Ballard town hall of 2018 — “the day Seattle Nice died” — I’ve spent a fair amount of time reflecting on why people feel the way they do about the homelessness crisis. More specifically, I’ve done some thinking about the enraged NIMBY, a specimen that was out in force that evening. Although I hope and believe this specimen is still rather rare, even in Ballard, it’s worth examining as a kind of archetype; NIMBY rage is the distillation of a set of feelings and opinions that also resonate, if less strongly, with a much broader swath of the population. This broader group is not all older, or all white, or all homeowners, but that’s their core demographic, and the archetypal enraged NIMBY is most definitely an older white homeowner. And this core demographic shares a core experience, which is in many respects a generational experience.

Many people born into the postwar decades of the last century developed a sense of living in a world defined by a set of rules and expectations, a sense of what one owes and is owed by society. You got a job (or got married), worked hard, bought a house and a car or two, abided by the law, saved money, put your kids through college, and after 35 years or so you were free to enjoy a comfortable retirement. The middle-class American Dream, if you like. Not a transcendent existence, maybe, but one that has its rewards.

To call this a social contract would be to misrepresent the way this state of affairs came about — the imperialism and the wars, the class struggle, the racial oppression — and also to ignore that this arrangement was available only to a relatively privileged and mostly white part of the population. Still, for the many who enjoyed this life, it must have been possible to experience it as a kind of social contract, with all the solidity and sense of deserving that implies. It must have seemed eternal, immutable. But it wasn’t. In retrospect it was an anomaly, a temporary and tenuous détente. We don’t live in that world anymore.

Over the past 50 years that social contract, such as it was, has been eroded: stagnating wages and casualized labor, cuts to social welfare programs, aggressive consumerism, weakening social bonds, overmedication and self-medication — all now exacerbated in cities like Seattle by soaring housing costs. As the average person’s economic existence becomes less secure, and their emotional existence more fragile, people are less able to help each other. The homelessness crisis is the most visible manifestation of this deeper dysfunction, the devastating convergence of all of these trends. The tent pitched in the greenway and the woman shooting up on the sidewalk are only the tip of an iceberg of social catastrophe, intruding into public space in a manner impossible to ignore.

Millennials tend to feel at home with the mass of ice lurking below the surface, because it explains our lives. When you grow up in the shadow of environmental disaster, enter adulthood with precarious job prospects, and never quite form expectations of stability or security, the notion that a fundamental restructuring of society is in order doesn’t feel all that radical. From this vantage point, homelessness may be heartbreaking, but it’s not confusing. A growing class of economic refugees reduced to the indignity of performing basic bodily functions — sleeping, washing, excreting — in public and amid obscene wealth? Yeah, that’ll happen. And it’ll probably get worse before we can make it better.

But for the social contract generation, it’s different. On the whole they’re still doing OK economically, relatively speaking, but many are less secure than they’d hoped to be. Some are truly struggling, or watching friends or family members struggle. The city where they built a life is changing fast, turning into something unrecognizable, inhospitable. This isn’t what they signed up for. Put yourself in their shoes, if those aren’t already your shoes. How do you comprehend the seismic changes taking place in the world? The homelessness crisis brings that question to your doorstep, sometimes quite literally. No wonder it provokes visceral feelings out of all proportion to its actual impact on your quality of life. Sure, there’s the unpleasantness, the filth, the fear for one’s property and even one’s personal safety. But more than that, homelessness at the modern scale triggers a kind of existential anxiety, because it is both sign and symbol of the dissolution of the structures that provide meaning and security, that make one’s sacrifices and sufferings worthwhile, that keep one’s life from feeling like a pointless farce. The need to blame someone must be acute.

People in this psychological space are susceptible to the anti-government, anti-tax, divide-and-conquer narratives that have become staples of the neoliberal playbook: I’m working hard to hold it together, no one is helping me, instead the government is wasting my tax money on handouts to people who are less deserving. This kind of sentiment has been fed by the right for decades, inflaming racial resentment and hostility toward immigrants, enlisting the poor and the squeezed “middle class” in waging war among themselves. Overt racism and xenophobia may be beyond the pale for normal Seattle discourse, but talk of the homeless as shiftless drug addicts who come from around the country to loaf in the supposed largesse of our social services? It’s all over Nextdoor.com.

If you bought in to the mythos of the 20th century social contract, today you find yourself on the horns of a dilemma: drill down on petty outrage or keep piling up the sandbags against despair. Fortify the belief that it all comes down to poor local governance and lax enforcement of the laws, or what? Accept that all that is solid melts into air? NIMBY rage is, at bottom, a desperate attempt to maintain a frame of reference that has become unsupportable.

People for Seattle and Moms for Seattle are speaking to the enraged NIMBY in each of us. With sensational images of tents, trash and urban decay, they aim to provoke our deepest anxieties, transmuted into frustration and anger. Unflattering photos of sitting councilmembers and claims of “failed leadership” and “political grandstanding” tell us who to blame. But maybe, just maybe, if we vote as they say, we can return to that lost world where life made a little more sense, where we all got what we deserved.

I don’t know any of the Moms (apparently there are some real moms, mostly in wealthy neighborhoods and gated communities), but one of the People is well-known: former city council member and mayor-for-a-moment Tim Burgess, leader of the PAC. I had a chance to work with Burgess on the Seattle income tax legislation in 2017, and I came away feeling that he was a principled person — I might not agree with some of his principles, but at least he had them. Now I’m not so sure. Burgess seems to have decided that in this case the end justifies the means. Whatever socialist dystopia he sees Seattle sliding towards, he will do whatever it takes to stop it. A lot of politics is about mobilizing people. But it matters not just that we mobilize people, but what we mobilize in people. Playing on people’s fears and awakening their pettiest and most reactionary impulses makes the world a worse place. If you find that's what you need to do to win, you're probably rooting for the wrong team.