Amtrak state of mind: What if America took its train system seriously?

This summer I rode to the Midwest and back. It got me dreaming about high-speed rail. 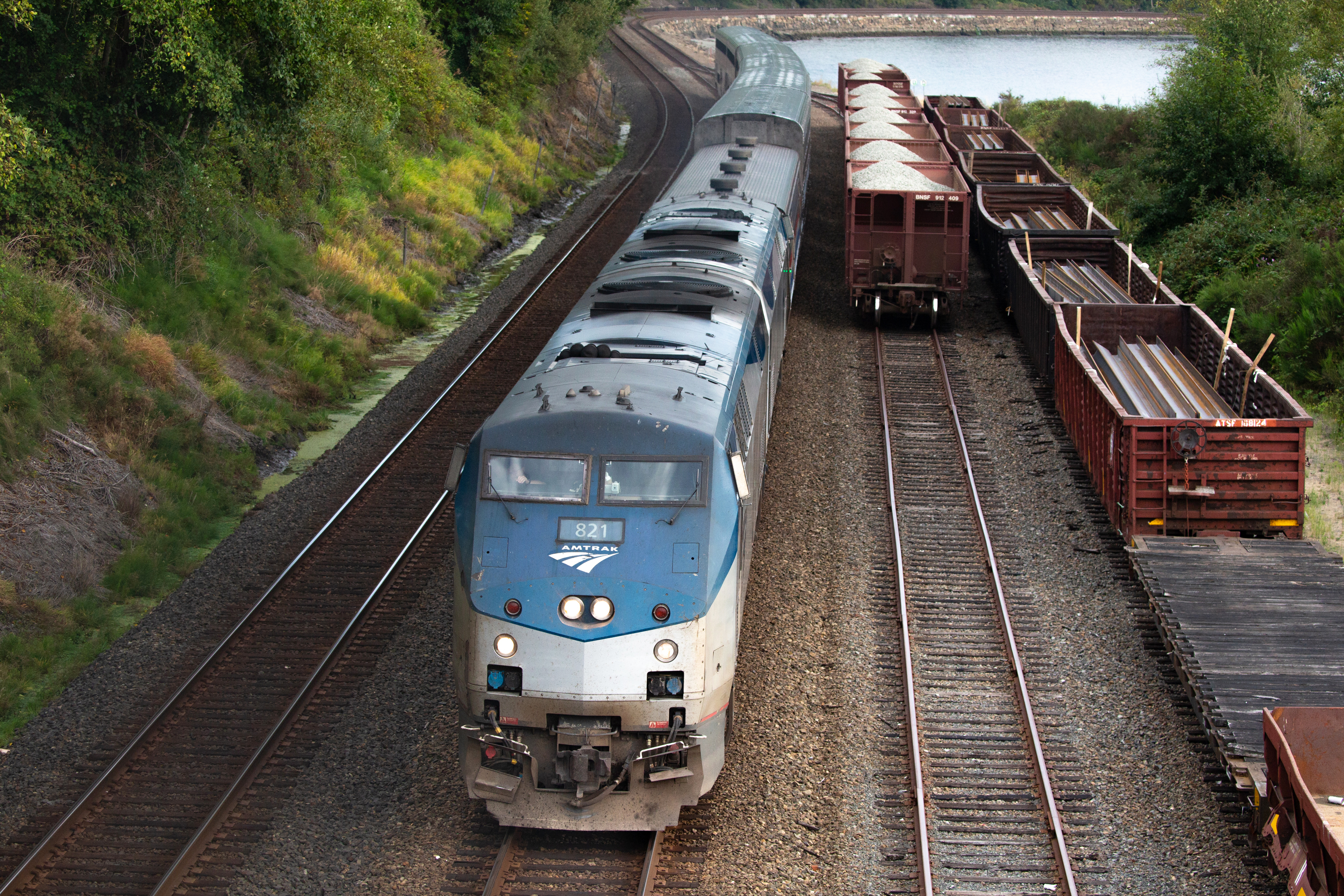 The Amtrak Empire Builder heads north on a track winding through Richmond Beach in Shoreline, Wash. on Sept. 5, 2019. (Photo by Karen Ducey for Crosscut)

I don’t often get out of Seattle, but this summer I rode the train to the Twin Cities and back. I wish I could say it was a principled choice to curtail my carbon footprint, but it wasn’t. Air fares were pricey, Amtrak came to mind, and the more I pondered the idea, the more shipping myself ground freight in a Wi-Fi-free box sounded like a good way to force a minivacation on my workaholic brain. I was needed in Minneapolis for just two days, so most of the trip was train, nearly 40 hours in each direction.

The Empire Builder starts up along the water, chugging through Golden Gardens and Carkeek Park and up to Everett before veering inland. In Everett a young woman boarded and sat down next to me. Her car had broken down again so she was riding back home to Wenatchee, where she had to work the next morning. Her boyfriend had bought her a four-pack of canned wine spritzers to lubricate the journey. She cracked one open and handed me another, and when she disembarked a few hours later she left the last one with me. The seats on Amtrak are spacious and they recline generously. It’s not so bad to sleep in coach.

After midnight, when the train stops in Spokane, they hitch up the sightseeing car, a sleeper and two more coaches full of passengers from the Portland branch of the route. It is somehow thrilling to wake up and find that what had previously been the back end of the train, a wall sealed off against the emptiness and darkness beyond, is now permeable, a portal through which one can discover more space, more people, more life. The little universe of the train expands overnight.

The Empire Builder is named for James Jerome Hill, the shrewd, driven, ruthless man whose Great Northern Railway cut treacherous switchbacks through the North Cascades at Stevens Pass, opening for business from Seattle in 1893. Competing railway companies had relied on massive public subsidies and land grants, in addition to the endless supply of cheap, disposable, mainly immigrant labor. James Hill got into the railroad game late and missed the subsidy train; his lines were a triumph of private enterprise. They started calling him the Empire Builder.

A hundred years ago, trains were how people traveled around the United States. The automobile industry changed that. Vast federal subsidies flowed to highways and airports, as passenger rail infrastructure fell into disrepair and ridership plummeted. By the 1960s the decline had reached crisis levels and railways began closing down. Something had to be done. In 1971, under Richard Nixon’s administration, the National Railroad Passenger Corp. was born. It was a for-profit company, but it received public funds to assume operation of the 20-odd private railroads that still ran intercity passenger trains. Only half the routes survived the consolidation.

By all appearances this was an effort to rescue passenger rail. In fact it was a ploy to let it die more quietly and, perhaps, on someone else’s watch. Amtrak, as the National Railroad Passenger Corp. came to be called, was not expected to last long. But it did. Many attempts have been made over the decades to defund or dismantle Amtrak. The strategy is familiar: starve a public service, then use its underperformance to justify eliminating it altogether. Textbook neoliberalism, except they can’t quite close the deal. Congress always appropriates just enough funding to keep Amtrak limping along. No powerful interest has a stake in truly making the system work, but it’s too popular to kill. People love trains.

The sightseeing car is the place to be. In the morning I sat myself down near a man with a camera whom I soon judged by his accent to be German. We glided through the steep, wooded slopes of the Rocky Mountains and along the southern edge of Glacier National Park. Once he had spent a few days there hiking and camping. What we could see from train, he said, was only one-tenth of the beauty.

Miss Oliver, the snack bar attendant in the sightseeing car, made periodic announcements over the loudspeaker. She always delivered part of her message in song. Her voice was clearly untrained but she made up for it with unaffected exuberance. This was her car to run and she was doing it her way. I don’t know whether she sang with the tip jar in mind, but I definitely added at least a dollar every time I ventured downstairs for coffee.

Every once in a while a coterie of Amish women playing cards at a table would break into song, too, sweet, pious songs with simple harmonies.

We passed through a lot of Montana farmland, flat and endless with big skies. The German told me about how the U.S. government subsidizes corn production. We passed by cows grazing. He told me about how most cows live out their lives in boxes and never get to graze. They eat the subsidized corn, which isn’t good for them. We passed farm houses. He thought the families in those houses were probably living simpler and happier lives. I told him I thought the kids probably wanted to get the hell out of there. He asked me what was inside the hay bales. Hay, I said. Just hay. He told me some things I already knew and others I wasn’t sure were true. He was as pleasing to look at as the scenery and I was happy to listen to him ramble.

Here’s who rides Amtrak: old white people, Amish people, people who are afraid of flying, foreigners. Most poor people ride Greyhound, and the poorest people don’t travel at all, but some also ride Amtrak. Yes, I know the East Coast lines are different. But on the Empire Builder there is nary a commuter in sight. No one is in a hurry — which is good, because no one is getting anywhere fast. By the time we passed into North Dakota we were running two hours behind schedule. Judging from my limited experience with Amtrak this is not unusual.

There’s a reason why the trains are perpetually running late. Amtrak owns almost none of its own track. Instead it pays private freight lines like the Burlington Northern Santa Fe (BNSF) for the use of their tracks. By federal law, freight rail operators are supposed to give priority to passenger trains, but in practice, this law apparently is violated with impunity. Time and again the train slows to a stop, waiting helplessly for freight cars to make way. On its website, Amtrak makes a plea, somehow poignant in its impotence, that passengers contact their members of Congress and ask them to please enforce the law.

The problem has been getting worse. Since the turn of this new century, new fracking and drilling technologies have paved the way for intensive oil extraction from the Bakken Formation, which lies beneath large parts of Montana and North Dakota. The industry has boomed, and the number of crude oil trains traveling on the BNSF tracks has risen in step. Our cleanest form of intercity transportation is, quite literally, being held up by fossil fuels.

Miss Oliver’s voice came over the loudspeaker again. She announced that Kyle was not going to get away with it. She knew it was his birthday, and we were all going to sing “Happy Birthday.” There was nothing he could do about it. Miss Oliver added that this was going to be the best birthday Kyle would ever have because he was spending it on the train and on the train you always have friends. None of us knew who Kyle was — except, presumably, Kyle — but we all sang for him nonetheless.

There was water, rivers and lakes and marshes, and there were birds: pelicans and eagles, cormorants and hawks, herons, families of ducks, great flocks of sparrows. Orange flames flickered across the wheat fields, marking oil wells, beautiful and ominous. When the evening light faded, the German got up to retire to his coach. “I wish there were more fairness,” he said, gazing out at the horizon. “But maybe it’s human nature.” The horizon gazed back at us, apparently mute on the question of fairness and human nature. Maybe it’s a cliché that long train rides put people in a contemplative frame of mind, but still it’s absolutely true.

If you have the time, I highly recommend riding Amtrak. But even more highly, I recommend that we build a real train system in this country. Of course this can’t happen without federal investment on a grand scale, as was the case with the interstate highway system in the middle of the past century. We’re not going to get that from a president who wants to pull the plug on Amtrak and build more roads. But 2020 is near, “Green New Deal” has become a household phrase, and awareness of the climate costs of air travel is growing. Here in Washington state, the dream of regional high-speed rail appears to be gaining some traction. Perhaps a surge of public enthusiasm for a national high-speed rail network is not too much to hope for. Would riding the train lose much of its charm, its nostalgic appeal, if it became a more viable form of transportation? No doubt it would. But that’s a sacrifice I for one am willing to make.