In the fight against Washington wildfires, drones are now as vital as chainsaws

Behind the scenes, a squad of IT teams, meteorologists and other tech experts are helping fight fire and save lives. 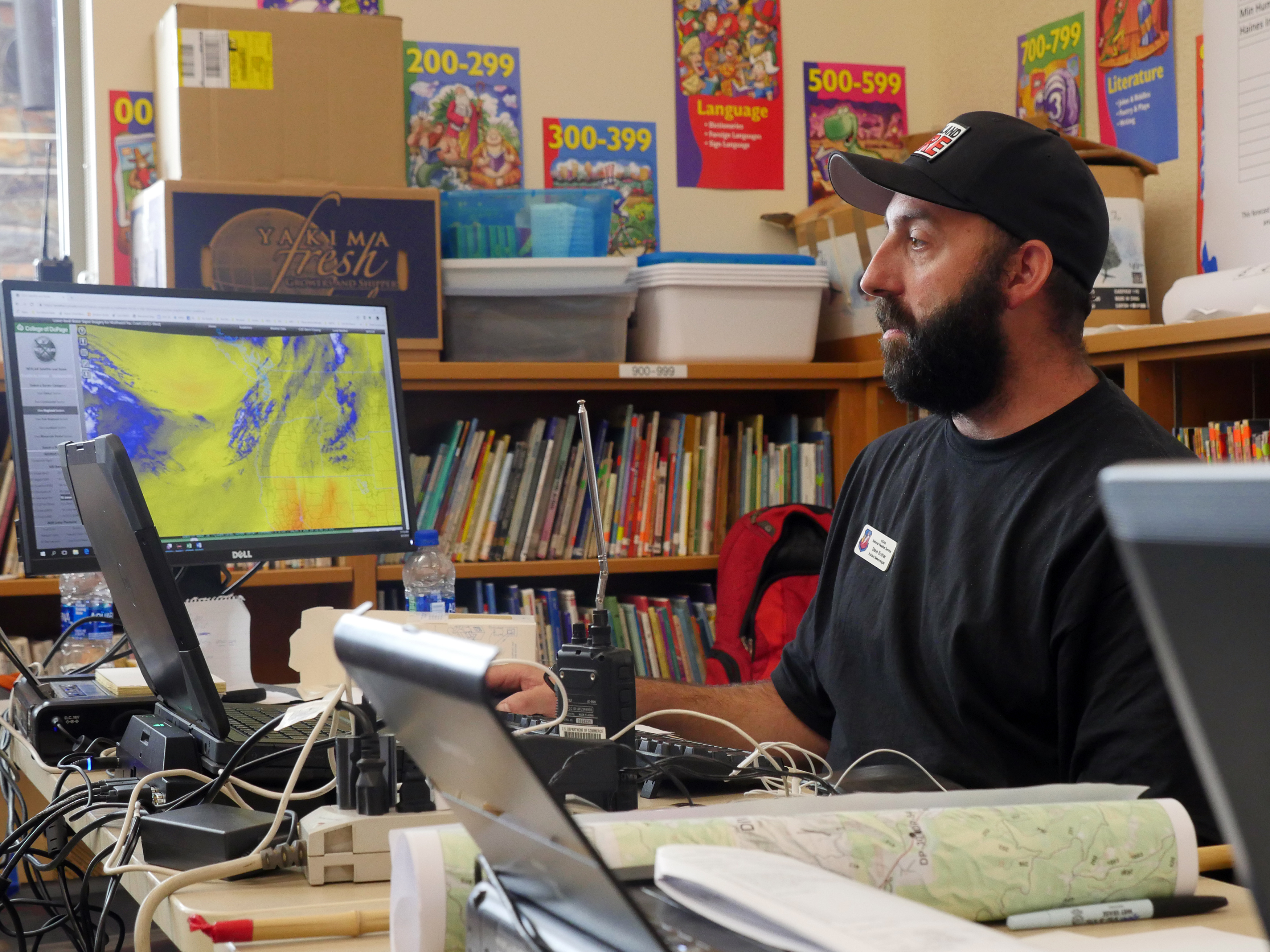 From a monitoring camp set up at Naches Valley Elementary School, Steve Bodnar, an incident meteorologist with the National Weather Service, uses weather data to help predict how the Left Hand Fire may grow, July 2, 2019. (Photo by Emily McCarty/Crosscut)

Mike Gascon was eating lunch in Vancouver, Washington, thinking about getting a haircut, when the phone rang. His bags were already packed. This was his on-call week, and, while the fire season has been mellow in the Northwest, he knew he had to be ready.

Three hours later, Gascon was on the road to Naches, a town 20 minutes northwest of Yakima. The Bureau of Land Management employee pulled into the Left Hand Fire camp, a village of tents, RVs, trucks and trailers sprawled across the playground and parking lot at Naches Valley Elementary School. Eventually, 380 personnel would deploy to fight the 3,400-acre fire located near the Lefthand Creek, at an operational cost of $7.6 million.

Gascon is an information technology support specialist whose job is to keep all the behind-the-scenes tech running — and there’s a lot of it.

Wildland firefighting has become an increasingly high-tech endeavor. Maps drawn from satellite imagery are coupled with microscale weather forecasts and sent to firefighters on the fire lines. Unmanned aircraft watch and, increasingly, fight the fires. All those efforts depend on support workers just behind the fire lines.

“Every department here comes and wants IT. Everybody wants internet, everybody from the food unit leader to if there’s a fatality,” Gascon says. “We cover all aspects of that — cameras, computers, mobile devices, GIS.”

Gascon, who started working in fire-service technology 10 years ago, was joined on the Left Hand Fire by another IT support specialist, Chuck Vertrees, up from the Oregon coast.

A decade ago, the number of incident and operations staff members who needed the internet could be counted on one hand. Now, Vertrees says, the daily bill for satellite internet runs is measured in thousands of dollars. The Left Hand Fire camp had internet on site, but the IT support work becomes more challenging when a camp is remote.

“The [IT support] team has a cache of its own technological equipment that it travels with in a trailer,” Vertrees says. “The team can actually deploy in the middle of a field, anywhere.”

“Internet access has become a very integral, important part of how a team runs in the field,” he continues. “If we're in the middle of nowhere, or someplace with limited access, it's a balancing act to try and meet everybody's needs. We have to support the firefighter, the crews.”

For fire managers, the crucial communication is the Incident Action Plan, a strategy memo published once or twice a day at incidents like the Left Hand Fire. The plans include detailed notes on everything from fire movement to weather to medical facilities, and can run more than 30 pages.

Fire behavior analysts use the plans to guess where the fire is headed. Those estimates are essential to organizing a safe, successful containment scheme.

“They have access to all maps of the terrain, which is surveyed every couple of years. All the maps also contain all of the previous fires, back to the ’50s or ’40s,” Vertrees says. “They know what type of terrain — it’s riparian, it’s tall timber, it’s brush, it’s grass, it’s a steep slope.”

Atop that geography, analysts layer weather information gathered from meteorologists assigned to the fire. Coupling prevailing winds and moisture movement with topography, they can keep firefighters out of harm’s way.

Steve Ziel and Eric Johnson are the Left Hand Fire’s analysts. Both came north from Oregon and work with Steve Bodnar, an incident meteorologist with the National Weather Service office in Spokane.

It’s not a desk job. The team of three regularly trades the elementary school’s air conditioning for the Central Washington heat to make field observations.

Ecological maps drawn from satellite imagery tell analysts what kinds of fuel are feeding the fire. Analysts look beyond the obvious ecology to make fine distinctions in the landscapes they examine, which helps in estimating how quickly they will burn.

Johnson puts together a forecast to predict what characteristics the fire is going to exhibit, describing its rate of spread and flame height, and the influences wind and vegetation will have on the fire. The fire behavior summaries that Johnson authors help firefighters know what to expect as they draw up fire lines. The important thing is getting ahead of the game.

“The take home is [that] you have time and space to take action. The fire will probably get there, but you'll be ahead of it,” Ziel says.

Fighting wildland fires takes coordination across local, state and federal agencies. Much of that happens through the National Interagency Fire Center, which houses the major federal landowners — Forest Service, Bureau of Land Management, Fish and Wildlife Service, Bureau of Indian Affairs and National Park Service. The Department of Defense, National Weather Service and U.S. Fire Administration work with those five agencies, as does the National Interagency Coordination Center, which dispatches resources to major fires across the country.

Buckley says technology has evolved quickly during his 11 years with the Park Service. Drone aircraft, he said, are changing firefighting as much as the advent of the chainsaw did generations ago.

The drones can be lifesaving, Buckley says, as firefighters have been killed in helicopter crashes while lighting controlled burns through a practice known as “aerial firing.” Airborne firefighters use a variety of techniques to ignite fires, including a “ping-pong ball system” dropping small balls filled with chemicals that burst into flames when they hit the ground.

“We're finding more and more uses for the [drones] as far as surveillance, recon detection of hotspots and most recently, aerial firing devices, where we don't have to put a person up in a helicopter [who’s] doing the firing,” Buckley says.

Larger unmanned aerial systems include full-size helicopters that can deliver supplies to firefighters in the field. The military and other agencies already use these, Buckley says, and it’s simply a matter of time before his agency deploys them.

In March, firefighting legislation sponsored by Sen. Maria Cantwell, D-Washington was signed into law, providing new funding and requirements for wildfire-fighting technology. The Forest Service and Department of the Interior will be required to track wildland firefighters by GPS and increase drone use. It also connects the Forest Service with the Department of Energy's national laboratories, such as the Pacific Northwest National Laboratory in Richland. Forecasts drawn up by national lab scientists will help shape Forest Service fire responses.

New technologies are aimed in part at enabling fire managers to peek through the smoke and find the fire’s edge. It’s no easy task.

“A lot of times with aircraft and observation, we can't see through smoke columns to exactly know where the fire perimeter is, so we have to put people on the ground to walk, hike and observe the fire field observers,” Buckley says.

Knowing those perimeters is a full-time job — in fact, it is two of them.

In Naches, geographic information system specialists Jody Thomas of the Forest Service office in Grants Pass, Oregon, and Alexandr Dozic of the Washington state Department of Natural Resources (DNR) use a variety of instruments to map the Left Hand Fire. Their tools include software applications, GPS units, information from airborne infrared cameras and observations from frontline firefighters. The team, which also includes mobile technology specialist Mike Mitchell, works in an air-conditioned van stationed on the Naches Valley Elementary playground.

Thomas takes a look at jurisdiction maps. The Left Hand Fire has designated Forest Service and DNR areas. Knowing who is in control of what is just one facet of her job. She also pulls Forest Service road information so the people on the ground can find working roads. Among other tasks, Dozic produces the briefing maps that Mitchell helps firefighters install on their phones and tablets.

“The bottom line is, when we get here, no matter what kind of technology we have, they want a map,” Thomas says. “So if we can give them that, then everything else can come later.”

Firefighters feed information into the digital cloud once they’ve reached an area with cellular service. This goes to Thomas’ team and then to the operations crew so the team can respond swiftly.

“The quicker that you get people information, the quicker they're going to go out there and fight the fire. So it has that domino effect for the firefighters to get the fire out,” Thomas says. “That’s the main goal, besides protecting people.”

by / August 10
Inside Crosscut