Harnessing fire made us human — then we got greedy. Welcome to the Pyrocene

The Ice Age has given way to a fire age. A historian of fire weighs in on its power and peril. 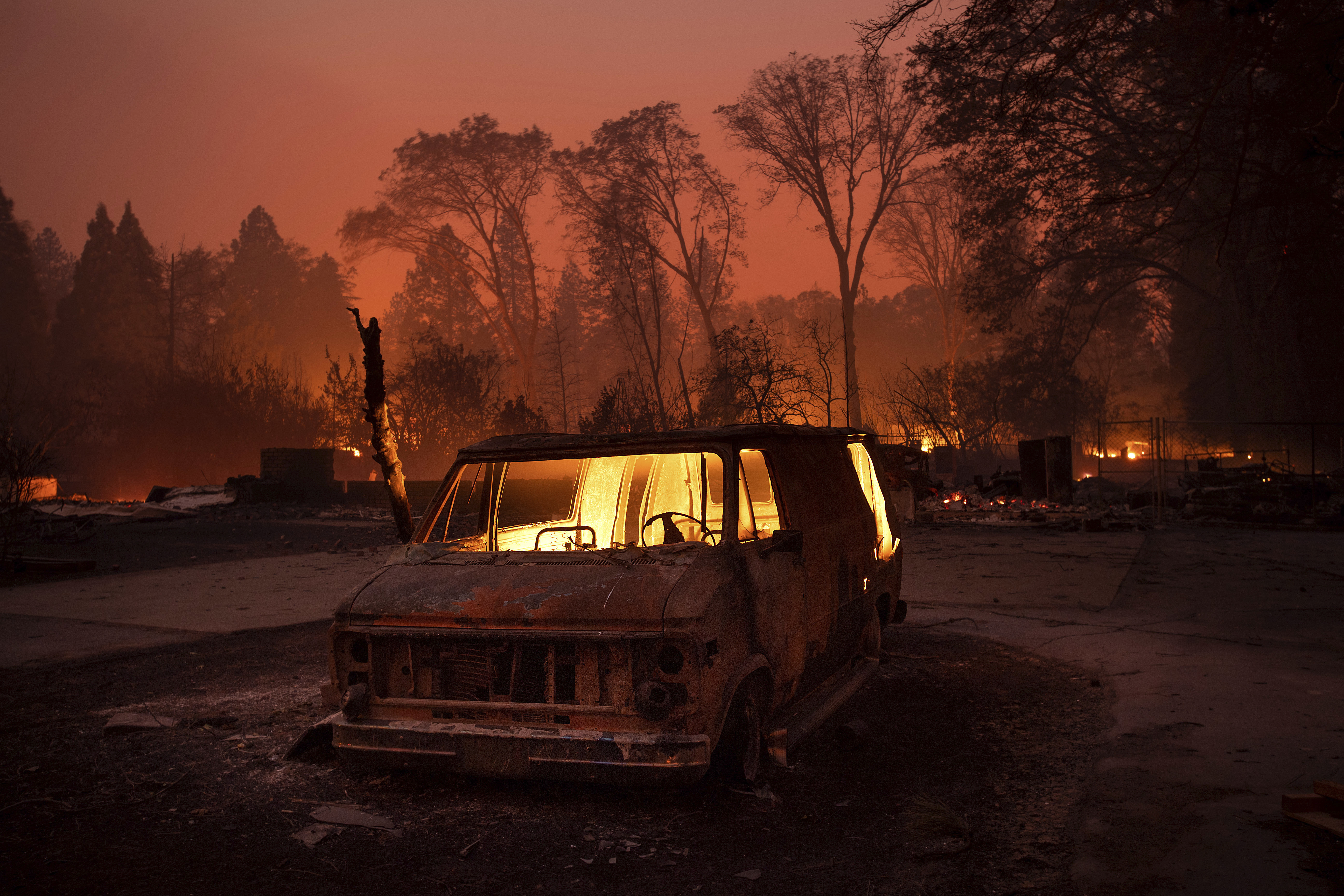 In this Thursday, Nov. 8, 2018 file photo, flames burn inside a van as the Camp Fire tears through Paradise, Calif. (Photo by Noah Berger/AP)

We live in a fire age. We’ve been living in one since the last ice age faded, and humanity began to use its firepower to remake the planet.

Ice and fire differ in fundamental ways. Ice is a purely physical process that occurs with or without life present; and the rhythms of the ice’s advances and retreats have responded to Milankovic cycles that affect how sunlight reaches Earth. Fire feeds on living or once-living fuels, which makes it malleable to human manipulation. Our ancestors could only adapt to an ice age. We have created a fire age.

Our firepower began with control over ignition. We could take over places prone to burn, and we could fashion technologies — pyrotechnologies, really — that extended our firepower. Then we began to control fuels by slashing woods, draining wetlands and running livestock, and so recoded the pulses and patches by which fire appeared. Then, ever questing for more to burn, some 200 years ago we turned to lithic landscapes, once-living landscapes that over geologic time were buried and turned to stone. We burned fossil biomass. We exhumed stuff from the deep past and released its effluent into the deep future. For ages the human quest for fire was a quest for sources, for more stuff to burn.  Now that has inverted into a search for sinks to absorb all the output from our inextinguishable burning.

Our firepower is unhinging the atmosphere, the ocean, the biosphere. Even climate history has become a subset of fire history. The range of anthropogenic fire, directly and indirectly, has assumed the scale of Pleistocene ice. In a real sense, ice ages have yielded to a fire age, the Pleistocene to a Pyrocene.

Why not call it the Anthropocene? Many people have. But I’ve been involved with fire for over 50 years and across 28 books, and Pyrocene better conveys both the medium and the message. It accents the unique character of our ecological signature, which has always been fire. It forces us to recognize that it is fire in all its manifestations — burning living landscapes and burning lithic ones, fire controlled and fire feral, fire as ecological enabler and fire as technological catalyst — that is the prime mover of planetary change and the informing principle of a narrative that extends from early humans into the future. A uniquely fire planet, Earth, the only planet we know of that has fire, met humanity, a uniquely fire creature, one who now holds a species monopoly over the manipulation of fire. When a critical mass of combustibles and fire starters was reached at the end of the last glacial epoch, a slow explosion of burning resulted. Circumstances favored fire, a creature existed willing to use it, and together they created a world to favor yet more fire. 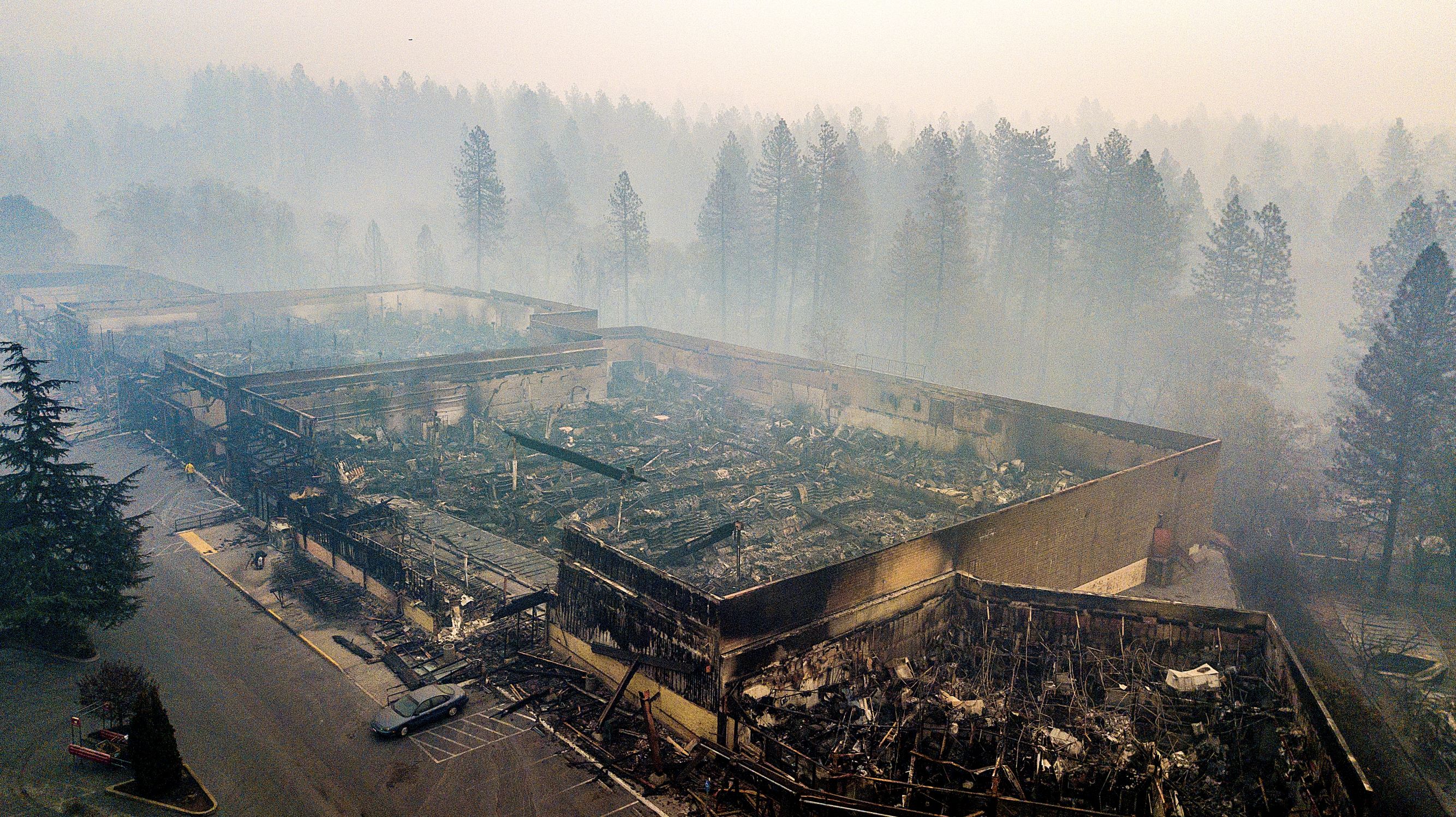 Smoke hangs over the scorched remains of Old Town Plaza following the wildfire in Paradise, Calif., on Thursday, Nov. 15, 2018. The shopping center housed a Safeway and other businesses. (Photo by Noah Berger/AP)

Smoke hangs over the scorched remains of Old Town Plaza following the wildfire in Paradise, Calif., on Thursday, Nov. 15, 2018. The shopping center housed a Safeway and other businesses. (Photo by Noah Berger/AP)

We have long understood how our landscape fires interact with natures. We don’t appreciate how our industrial combustion interacts with landscape burning. They collide, they collude, they compete. Between them they have divided Earth into two grand realms of combustion that coexist only during the transition from one to the other. In the past we staved off unwanted fire by preemptive burning and big burnouts; now, we counter open flame with fire-powered engines in the form of planes, helicopters, fire trucks, pumps and chain saws. The old regime kept fire on the ground. The new one removed it, as electricity removed flame from homes and factories. Urbanites don’t appreciate how fire informs the planet because they mostly don’t see it or experience it, except as eruptive threat.

It isn’t simply that our combustion habits have perturbed a climate that had remained roughly stable for 6,000 years. As with ice ages, the indirect effects range more widely. The change is affecting sea levels, reorganizing biotas, stimulating extinctions and underwriting how we live on the land. If you want a perfect expression of how the two realms of fire can interact, consider the wildfires sparked by powerlines that then blast through communities themselves organized around transportation powered by fossil fuels, places like Santa Rosa and Paradise in California; Gatlinburg, Tennessee; and Bastrop County, Texas. It's not solely a western phenomenon, or even an American one. The Pyrocene is global.

The Pacific Northwest will feel the emerging fire age as pervasively as it did the past ice ages. There will be places of intense burning — the equivalent of glaciers, ice sheets and pluvial lakes. Mostly there will be endless peri-pyric knock-on effects analogous to the periglacial outwash and loess plains, exposed continental shelves and altered climates that accompanied the ice. For fire this will include shifting physical geographies, changed flora and fauna, different regimes of rains and rivers and long lag times between causes and consequences. Ice made for more ice. Fire will make for more fire.

We have caused fire to swell beyond the ecological baffles and barriers that have guided it for over 400 million years. Once, fire had to burn within the rhythms of day and night, winter and summer, droughts and deluges. Now industrial fire can burn whenever we choose without regard to environmental considerations, and landscape fire, amid broken biotas, can run amok. But we can replace fossil-fuel combustion with other sources of power. And we can put good fire back into a suitable ecological habitat.

The Pacific Northwest will feel the emerging fire age as pervasively as it did the past ice ages.”

Anthropogenic fire has two prevailing narratives, which have braided like strands of DNA to code for our fire character. A Promethean narrative speaks to fire as a source of power, as something abstracted from its natural setting, perhaps by force. A primeval narrative tells of fire as a companion on our journey, as a link that joins humans to the living Earth. In recent times we have birthed a world that has too much bad fire, too little good and too much combustion overall. We need a lot less Promethean fire and a lot more primeval. It’s not enough to quit burning fossil biomass. We have to also reclaim our role as keeper of the flame for living biomass. Fire is a creation of the living world:  life created the oxygen and fuel it needs. Fire’s chemistry is a biochemistry, taking apart what photosynthesis put together. With humans even ignition falls within life’s grasp. We need to reinstate all those flames in landscapes that had come to depend on fire and that, thanks to our Promethean pivot, we removed or scrambled.

Fire is not ours to do with as we please. Nor are we at war with it. Long ago, we forged a mutually useful pact. Fire made us distinctive and powerful; we changed fire’s presence on the planet. We took fire to places and seasons far beyond what its natural circumstances would allow; fire took us everywhere, even to the ice of Antarctica and to the moon. For 200,000 years our species managed that relationship.

Then over the past 200 we broke it. We got greedy for Promethean fire and neglected to tend primeval fire. We forgot how good fire made us and how bad fire can unmake us. We forgot our relationship to our best friend and worst enemy. A little fire can hold off the ice. Too much fire and we will plunge from megafires into a full-blown fire age that will be good for fire and bad for us. 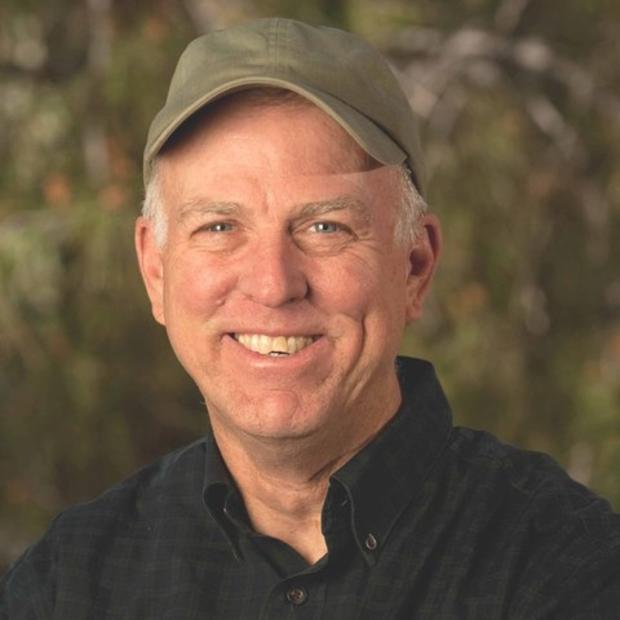 Stephen Pyne is a historian and author of 35 books, most of them on fire.