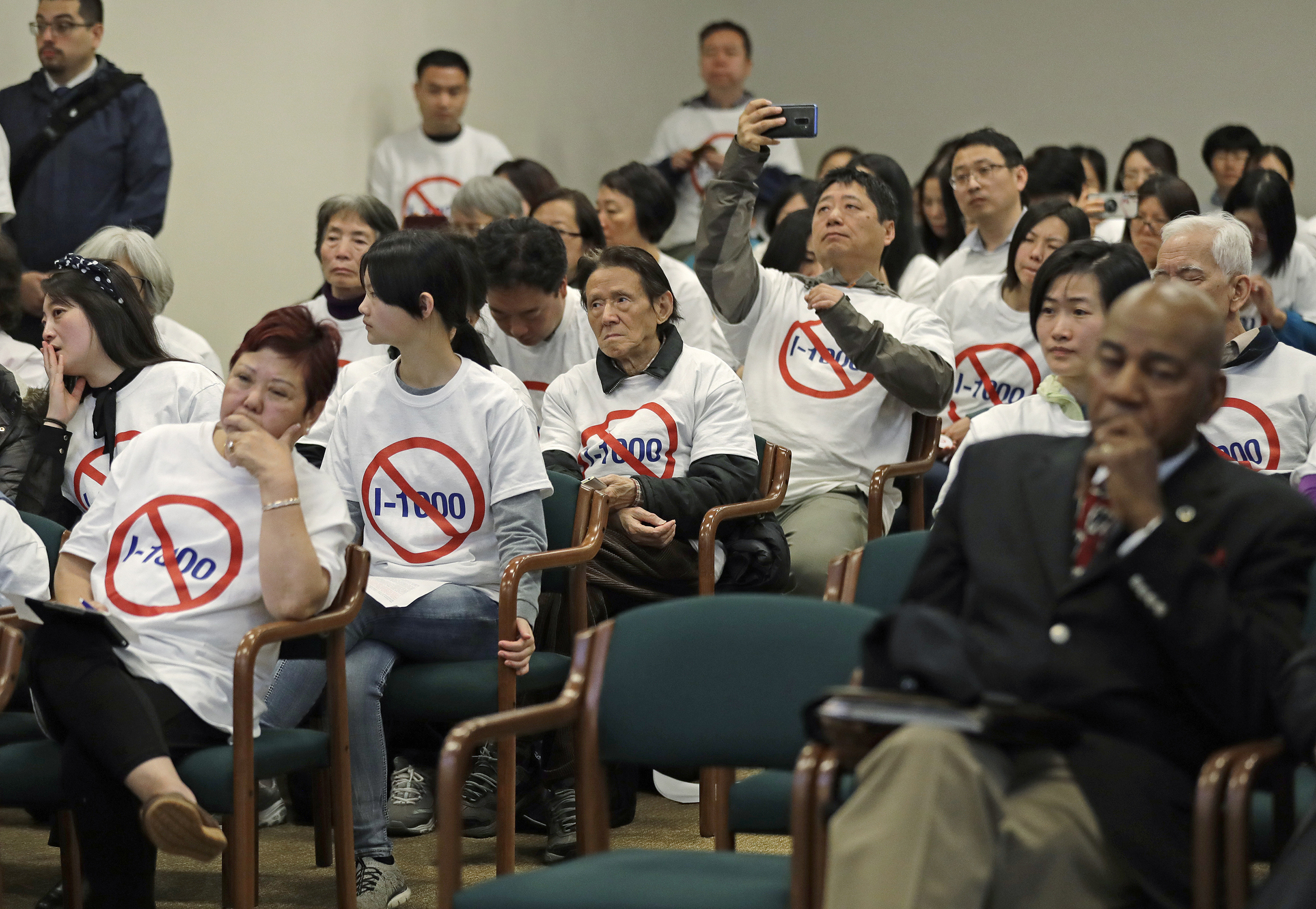 People opposed to Initiative 1000 wear T-shirts as they sit in the audience of a joint Washington state House and Senate committee, April 18, 2019, at the Capitol in Olympia. I-1000 will go before voters in November as Referendum 88, and would allow state government to use affirmative-action policies that do not constitute preferential treatment to remedy discrimination in public employment, education and contracting. Nat Jackson, the citizen sponsor of I-1000, sits at right. (AP Photo/Ted S. Warren)

Washington state voters will soon decide whether to reinstate affirmative action in government hiring, contracting and education programs, or whether the state should continue banning that practice.

Initiative 1000, which will appear for voter approval on the November ballot as Referendum 88, would allow characteristics such as race, ethnicity and sex to once again play a role in decisions about public hiring, contracting and admissions to public universities. The initiative contains language specifically banning the use of numeric quotas, while specifying that race or ethnicity cannot be the “sole qualifying factor” used to accept a lesser qualified candidate over a more qualified one.

However, opponents of the initiative have maintained that I-1000 would, in effect, install racial quotas in government hiring and university admissions.

“Racial quotas are implemented under Sections 8, 9, and 11, with a ‘disparity’ study to count by race, goals to enroll and hire by race, and timetables enforced by bureaucrats,” opponents of R-88 assert in the statewide voters guide. A lawyer opposing the affirmative-action measure made a similar claim in a court filing earlier this month.

Yet past U.S. Supreme Court decisions have made it clear that the use of numeric quotas to implement affirmative action policies — such as setting aside a specific number of slots for members of certain racial or ethnic groups — is unconstitutional.

In separate interviews with Crosscut, five law professors from around the country said that considering race as one factor among many, as I-1000 would allow, aligns with what past U.S. Supreme Court rulings have said about the issue. All five law professors have expertise in constitutional law or affirmative-action cases.

David Oppenheimer, a clinical professor of law at the University of California, Berkeley, said even if I-1000 were to become law, any state agency or university that attempted to implement a quota system would face legal action, and most likely have that system struck down by a judge.

“If an agency or a university instituted a quota, there would be a lawsuit filed within days, if not hours,” said Oppenheimer, who directs the Berkeley Center on Comparative Equality & Anti-Discrimination Law. “And, under current law, there would be no legal defense.”

He and the other professors said the ban on using quotas has been clear since 1978, when the U.S. Supreme Court decided the case of Regents of the University of California v. Bakke. In the Bakke case, the high court struck down a system in which the university’s medical school evaluated applicants according to two separate tracks based on their racial and ethnic background. That system, which set aside a specific number of admission slots — 16 out of 100 — for candidates of color, constituted an illegal use of quotas, according to the deciding opinion. In that opinion, Justice Lewis F. Powell Jr. wrote that the medical school’s admissions policy violated the equal protection clause of the 14th Amendment.

At the same time, the Bakke case did not preclude race from playing a role in admissions decisions. In a later case, Grutter vs. Bollinger, the high court said race could be considered as one factor among many to help universities achieve the educational benefits that come from increasing diversity. The Grutter decision upheld a race-conscious admissions policy at the University of Michigan’s law school, because it gave “serious consideration to all the ways an applicant might contribute to a diverse educational environment,” and ensured those factors were “meaningfully considered alongside race."

“The idea is that all of these different characteristics matter in terms of achieving diversity, and one is not going to outweigh the other,” said Deirdre Bowen, an associate professor of law at Seattle University. “We never are going to have, in essence, a separate pool of candidates where we basically say, ‘These are people of color and they’re getting in.’ ”

The language of I-1000 recognizes that distinction, Bowen said. “In fact, it makes that very clear,” she said.

Contrary to the claims of I-1000 opponents, all five law professors who recently spoke to Crosscut said the practice of setting goals and timetables for improving diversity in admissions and hiring is not the same as instituting a quota system.

“The Supreme Court has never said that goals and timetables, where they are appropriate, equal quotas,” said Theodore Shaw, a law professor who directs the Center for Civil Rights at the University of North Carolina School of Law at Chapel Hill.

“Goals give something to shoot for, timetables give you a period in which you want to accomplish what you can accomplish,” Shaw said. “But to translate that into ‘quotas’ when a piece of legislation says quotas are unacceptable — that’s a leap.”

For instance, if a state agency set a nonbinding goal of having the racial and ethnic makeup of its employees mirror the statewide population, that would not constitute setting an illegal numeric quota, based on past court rulings, said Seattle University’s Bowen. She said that’s because the goal of achieving proportional representation is aspirational rather than mandatory, and it is a target that is “ever changing” from year to year.

“The point is, you don’t have to meet a goal,” said Kimberly West-Faulcon, a law professor and the James P. Bradley Chair in Constitutional Law at Loyola Law School Los Angeles. ”You can aspire toward it, and it can vary over time. And a goal does not mean you necessarily have to pick someone from the applicant pool.”

After reviewing the text of I-1000, West-Faulcon said the initiative appeared to have “been drafted in the most legally sound way,” given current federal law.

Hugh Spitzer, a University of Washington law professor who co-authored a book on the Washington state Constitution, agreed. Spitzer said he reviewed the text of I-1000 before it was filed as an initiative to the Legislature, at the request of the initiative’s citizen sponsors.

“The most you can do is take these factors into account as one factor among many,” Spitzer said of the initiative, adding that I-1000’s language “expressly prohibits quotas.”

But Yvonne Kinoshita Ward, a civil rights lawyer who opposes the initiative, said that language is deceptive. Ward recently wrote a court brief alleging that R-88 and I-1000 would impose quotas in hidden ways.

In that court filing, Ward noted a section of the initiative that says, “Nothing in this section prohibits the state from remedying discrimination against, or underrepresentation of, disadvantaged groups as documented in a valid disparity study or proven in a court of law.”

In an emailed statement to Crosscut, Ward said that the legal experts contacted by Crosscut overlooked “the Referendum’s requirement to count and hire by race to meet numerical goals.” She said that oversight reflects why those “experts are in a classroom rather than a courtroom.”

“Voters deserve to know that Referendum 88 goes far beyond affirmative action because it is driven by privileged insiders seeking to use race over the merit earned by hard working students, employees, and veterans,” wrote Ward, who also lent her name to the voters guide statement opposing R-88.

In a follow-up phone interview Thursday, Ward said voters shouldn’t wait for the initiative to be struck down by the courts, a process she said would be chaotic and cost taxpayers money.

“This statute will be challenged immediately, and it will probably be struck down, because it violates the Constitution,” Ward said, “But that’s not a reason to vote for it.”

by / September 5
Article continues below