The measure, which Washington state voters will decide on in November, also has the support of many veterans groups. 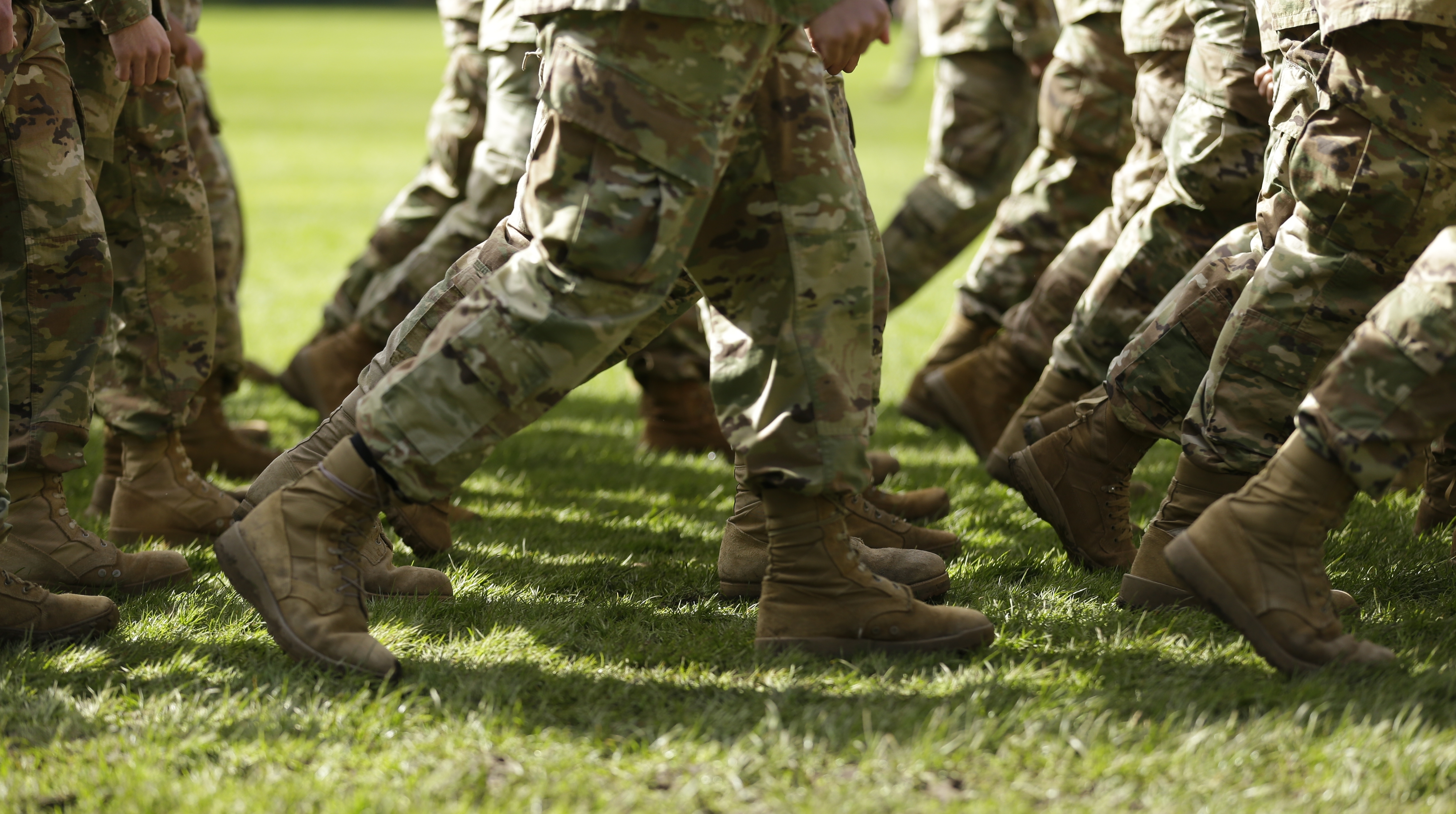 U.S. Army soldiers wear boots as they march in formation during a change of command ceremony on April 3, 2017 at Joint Base Lewis-McChord. (Photo by Ted S. Warren/AP)

The debate over affirmative action in Washington state has become not just about race and gender, but also about veterans.

Initiative 1000 would relax a 21-year-old ban on affirmative action in government employment, contracting and public education programs. Although the state Legislature passed I-1000 earlier this year, opponents collected enough signatures to refer the initiative to voters in November. It will appear on the November ballot as Referendum 88.

I-1000 opponents insist the policy would damage veterans' preferences that already exist in state law. Those statutes give veterans an added advantage in government hiring processes.

Yet supporters of the measure have repeatedly challenged that notion, saying I-1000 won’t curtail the benefits veterans receive when it comes to public employment.

As it turns out, a  prominent scholar of Washington state law agrees with the supporters of I-1000 on the issue — and he told state officials as much earlier this year.

Hugh Spitzer, a University of Washington law professor, wrote in April that he did not think veterans’ preferences would be negatively affected by I-1000. Spitzer’s letter was addressed to state Solicitor General Noah Purcell and Taylor Wonhoff, the deputy general counsel in Gov. Jay Inslee’s office.

Spitzer wrote that, in his view, it was "altogether incorrect" to conclude that I-1000 would prevent veterans from accruing additional advantages in government hiring and promotion processes.

He added that it was "highly unlikely Washington courts would rule that I-1000 would interfere" with the current law providing those benefits.

"The whole thing is very odd to me because I really don’t see what the potential problem is, or could be," Spitzer said in a phone interview Thursday.

State Rep. Laurie Jinkins, a Tacoma Democrat poised to become the next speaker of the state House, said she reviewed Spitzer’s letter in the spring, and also consulted legislative staff and lawyers in the state Attorney General’s Office before the Legislature voted on I-1000.

Jinkins, who until recently chaired the House Civil Rights and Judiciary Committee, said she briefed her colleagues on I-1000 based on those analyses.

The “consistent take” from lawyers, Jinkins wrote in a text message, was that I-1000 doesn’t interfere with the parts of current law that give veterans extra consideration.

That hasn’t stopped opponents of I-1000 from continuing to repeat their claim that veterans would be hurt if the initiative goes into effect.

The confusion appears to have arisen because of a section of I-1000 that would add “veteran or military status” to a list of characteristics that cannot be used to discriminate against candidates, nor to award them "preferential treatment."

But I-1000 creates a new definition of “preferential treatment,” which under current law is left undefined.

Under I-1000, preferential treatment would be defined as using a characteristic such as race, sex, ethnicity or veteran status “as the sole qualifying factor to select a lesser qualified candidate over a more qualified candidate for a public education, public employment or public contracting opportunity.”

In his letter, Spitzer said the “sole qualifying factor” language in I-1000 is important. Under current law, being an honorably discharged veteran can earn an applicant extra points during hiring and promotional tests for government jobs. However, Spitzer wrote that other qualifications are considered as well during the hiring process, making the veterans' scoring bonus only one of several factors being considered.

Other elements that play a role in the hiring process include education level, experience, practical knowledge and interview performance, he wrote.

“The hiring decision is not based solely on one qualifying factor, but several,” Spitzer wrote.

Because of that, Spitzer concluded Washington’s existing veterans’ preference law is not in conflict with I-1000.

Members of the Washington Veterans Legislative Coalition appear to concur with Spitzer’s analysis that veterans would not be harmed by the initiative. The coalition, which consists of at least 17 veterans groups throughout the state, wrote legislative leaders a letter earlier this year to express support for I-1000, while urging lawmakers to take action on the initiative.

Reached by phone this week, Jerry Fugich, chairman of the coalition, referred Crosscut to Spitzer’s letter, but declined to comment further.

At least one group of veterans and their supporters does not agree with Spitzer’s analysis, though. The Washington State Veterans Bar Association is urging voters to reject R-88 this November. A “no” vote on R-88 would prevent I-1000 from going into effect.

Thomas Jarrard, an attorney who serves on the organization’s executive board, said in an interview that he views I-1000’s language as unambiguously harmful to veterans, because of how it would add veteran status to the list of characteristics that cannot be used to award preferential treatment.

Jarrard disputed Spitzer’s analysis in a letter he wrote earlier this month, as well as in a memorandum he wrote in May.

“The passage of Initiative 1000 is a slap in the face to Veterans, their survivors and partners,” Jarrard asserted in his May memo.

Opponents of I-1000 recently submitted a similar statement for inclusion in the state’s voter pamphlet. The statement from the campaign to reject R-88 asserts, “Referendum 88 (I-1000) … harms Veterans,” attributing the problem to a “hidden loophole” in the initiative.

Supporters of I-1000 went to court earlier this month to block that statement from appearing in the voter pamphlet, saying it was incorrect and defamatory. However, a Thurston County Superior Court judge denied the I-1000 supporters’ request for a court order to stop the production of the voter pamphlet, ruling they didn’t meet the extremely high legal bar to prove they had “a very substantial likelihood” of prevailing in a defamation case.

The state Office of the Secretary of State compiles the statements that go into the voter pamphlet for statewide initiatives. Secretary of State Kim Wyman, Washington's top elections official, recently said it wasn’t her office’s role assess the truthfulness of statements included in the voter pamphlet, which is sent to about 3.4 million households.

The backers of I-1000 have since requested to have their lawsuit dismissed, a request Dixon granted.

I-1000 seeks to amend certain provisions of Initiative 200, a measure Washington voters approved in 1998 that prohibited the use of affirmative action in public employment, contracting and public university admissions. To "increase Washington's diversity" in those areas, I-1000 would allow the consideration of factors such as race, sex, age and ethnicity in the decision-making process.

As with veterans status, however, none of those characteristics could be used as the sole deciding factor in a hiring or admissions decision. The initiative includes language prohibiting the use of quotas, but allows for boosting diversity through targeted recruitment efforts, training and outreach, as well as through setting goals and timetables.

If voters approve R-88 in November, I-1000 will go into effect as state lawmakers intended when they approved the measure earlier this year. If voters reject R-88, the Legislature’s action will be overturned, and the initiative will not go into effect.

by / May 1
Article continues below

‘A new lifestyle': How two refugees are adapting to WA state