An advocate for those facing homelessness offers simple ways to connect. 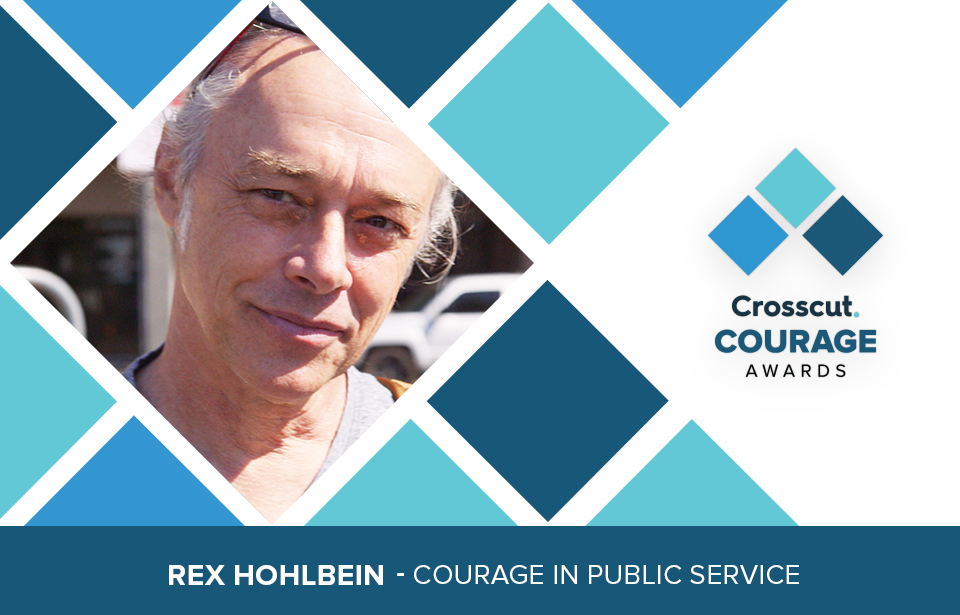 Rex Hohlbein had been designing high-end homes for two decades when, in 2009, the architect moved his offices to Seattle’s Fremont neighborhood. His coffee breaks and lunch hours saw him walking along the Lake Washington Ship Canal, where he found himself visiting with people who spent their days and nights on park benches and in tents along the shore.

Hohlbein listened as Steve, 52, would recount with precise clarity how his Baptist minister father would whip him with a strap every day of his childhood to “beat the devil out of him.” He heard the story of Heather, in her early 30s, whose pill use sent her down a path to heroin, then jail, then homelessness.

“I was having meetings in my office, designing homes worth millions of dollars, while people just outside were struggling, with nothing to their names,” Hohlbein said.

Hohlbein started letting unhoused people use his office bathroom. His conference room became a place to grab a cup of tea or dry off after a night spent in the rain. Word spread quickly, and soon there was a steady stream of people coming and going. One snowy evening, Hohlbein called his wife to tell her he wouldn’t be home that night because about eight men were sleeping on the floor of his office. She gave him an ultimatum: either lock his door or start a nonprofit.

“Everyone who was walking in the front door was more important than my drawings,” Hohlbein said. “My mind was made up. There was no going back.”

Hohlbein will be honored for his service with Crosscut’s 2019 Courage in Public Service Award. Seats and tables for the Crosscut Courage Awards fundraising breakfast can be purchased here.

The nonprofit Facing Homelessness launched in 2014, four years after Hohlbein created a Facebook page of the same name Hohlbein used to post photos of and request donations for the unhoused men and women he encountered. The page’s close-up, black and white portraits are accompanied by prosaic and heartstring-tugging stories of each person’s plight, written by Hohlbein.

Each story includes a gentle request for help. Followers — more than 52,000 of them — respond in a big way. Take Edgar, who needed $479 to pay five parking tickets to keep his home, a 2006 Ford Escape, from being impounded. A Paypal link netted $1,322 from dozens of individual donations, the excess of which was used to purchase four new tires for Edgar’s SUV and gas cards for others in similar situations. Michelle, who lost her home after a breakup, was looking for a tent. Her request was fulfilled in the first comment — “Please let Michelle know that a 3-person waterproof tent is on its way and should arrive by the end of next week.”

‘He wasn’t afraid to shake our dirty hands’

Karina Wallace had a simple request. She wanted to make rosaries, but didn’t have the supplies. Hohlbein made the ask on Facebook, and donations flowed. Hohlbein’s judgement-free outreach took Wallace by surprise.

“We didn’t know how a person that didn’t know us could care and want to help,” said Wallace, who was living in a car at Gasworks Park with her boyfriend, Alexander Brooks.

It was one of many interactions Wallace and Brooks would have with Hohlbein over the next four years. He’d stop by periodically to check on them. He’d give them $5 for gas. He’d take the couple out for coffee, buy them a pastry and ask them what they wanted out of life.

“We were encouraged and inspired by Rex,” Wallace said. “He showed us that we could live a different life. For once it seemed like someone believed in us.”

Hohlbein helped Wallace and Brooks access assistance and build a support system that helped them move out of their car and into permanent housing. Today, Wallace is working as Facing Homelessness’ community programs coordinator, and Brooks is pursuing a career as a firefighter. They say they owe their success to Hohlbein.

“Rex has a way of showing he cares without pointing a finger,” Wallace said. “He wasn’t afraid to shake our dirty hands.”

Many ways to make a difference

The nonprofit Facing Homelessness oversees the Just Say Hello initiative, which encourages passersby to simply share a smile with those facing homelessness, and the Window of Kindness, a sliding glass window in Seattle’s University District from which volunteers hand out socks, gloves, snacks and other essentials. The organization hosts community cleanups where dozens of volunteers meet to bag trash at  Seattle homeless camps.

Facing Homelessness’ BLOCK Project, which builds tiny houses in the backyards of homeowners, is arguably the nonprofit’s most ambitious undertaking. BLOCK Architects, which Hohlbein launched in 2015 with his daughter Jenn LaFreniere, who is also an architect, oversees the design and construction of the homes (and designs a number of non-BLOCK Project structures to pay the bills). Facing Homelessness takes care of the legal and administrative details.

Hohlbein likens the BLOCK Project to a dating service: those interested in having a 125-square-foot house built in their backyard are matched with an unhoused person in need. Personalities and hobbies of the host and the hosted are considered in an attempt to find a fit for a relationship that will include shared experiences and long-lasting friendships. With a footprint of just 222 square feet, the tiny homes are just a quarter the size of what city codes allow for detached housing.

“The plan is to keep them as small as possibly so as to not give fuel to the NIMBY voices,” Hohlbein said.

Four such homes have been built in Seattle backyards so far. Five more are on track to be completed by the end of 2019.

‘Just give them dignity’

Aside from the BLOCK project, which involves a relatively sizable commitment from the homeowner, all of Hohlbein’s outreach programs require very little obligation.

He encourages people to roll down the window at the freeway offramp and smile. Set aside two hours on a Sunday to join a community clean-up. Make eye contact. Simply say hello.

Hohlbein concedes that these types of engagements may take some people out of their comfort zones. He invites them to engage anyway.

“You don’t need to give them money,” Hohlbein said. “Just give them dignity.”